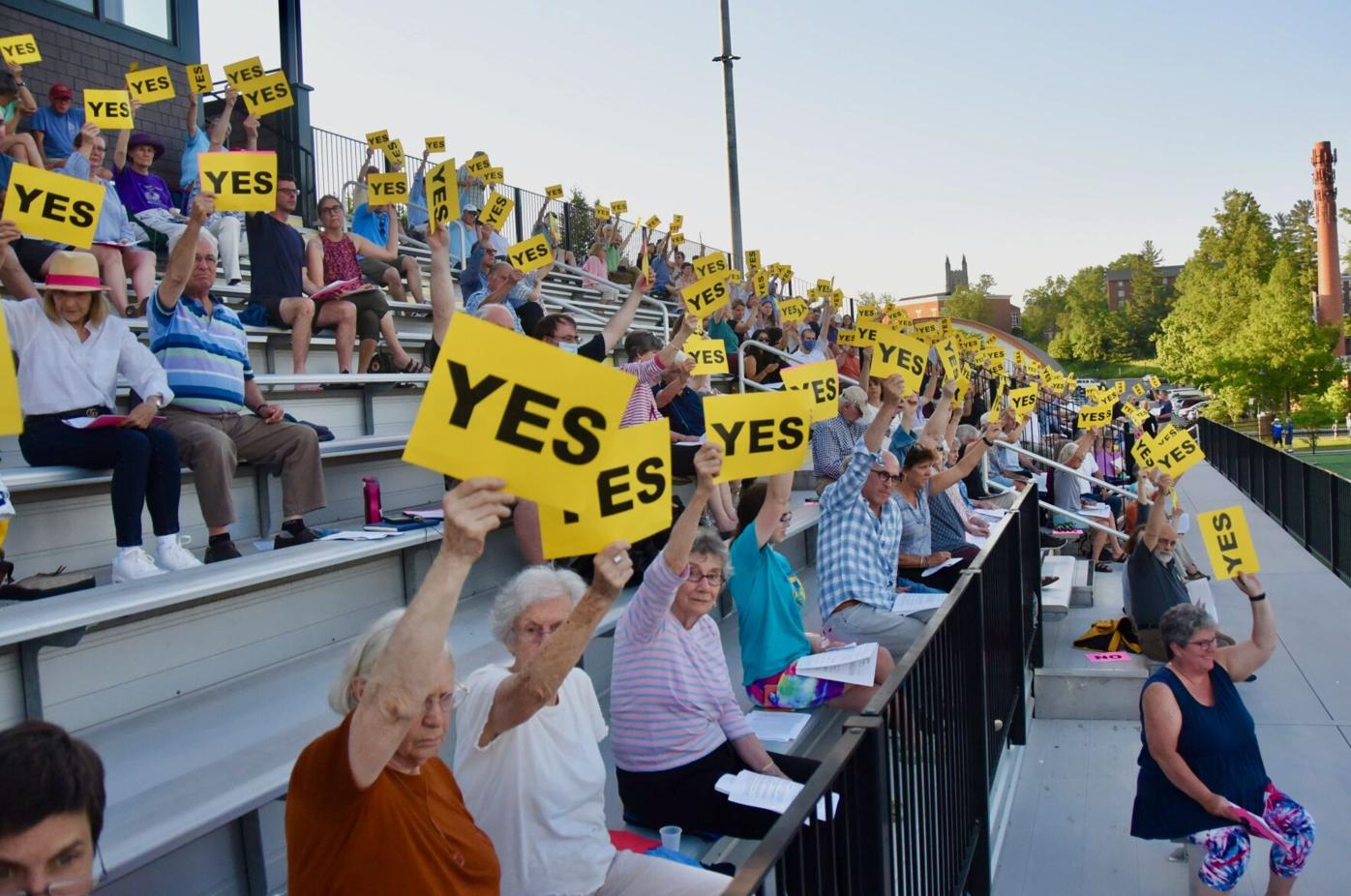 Williamstown voters make their decision known Wednesday on a number of warrant articles, including a change in the zoning bylaw to further regulate outdoor marijuana cultivation. 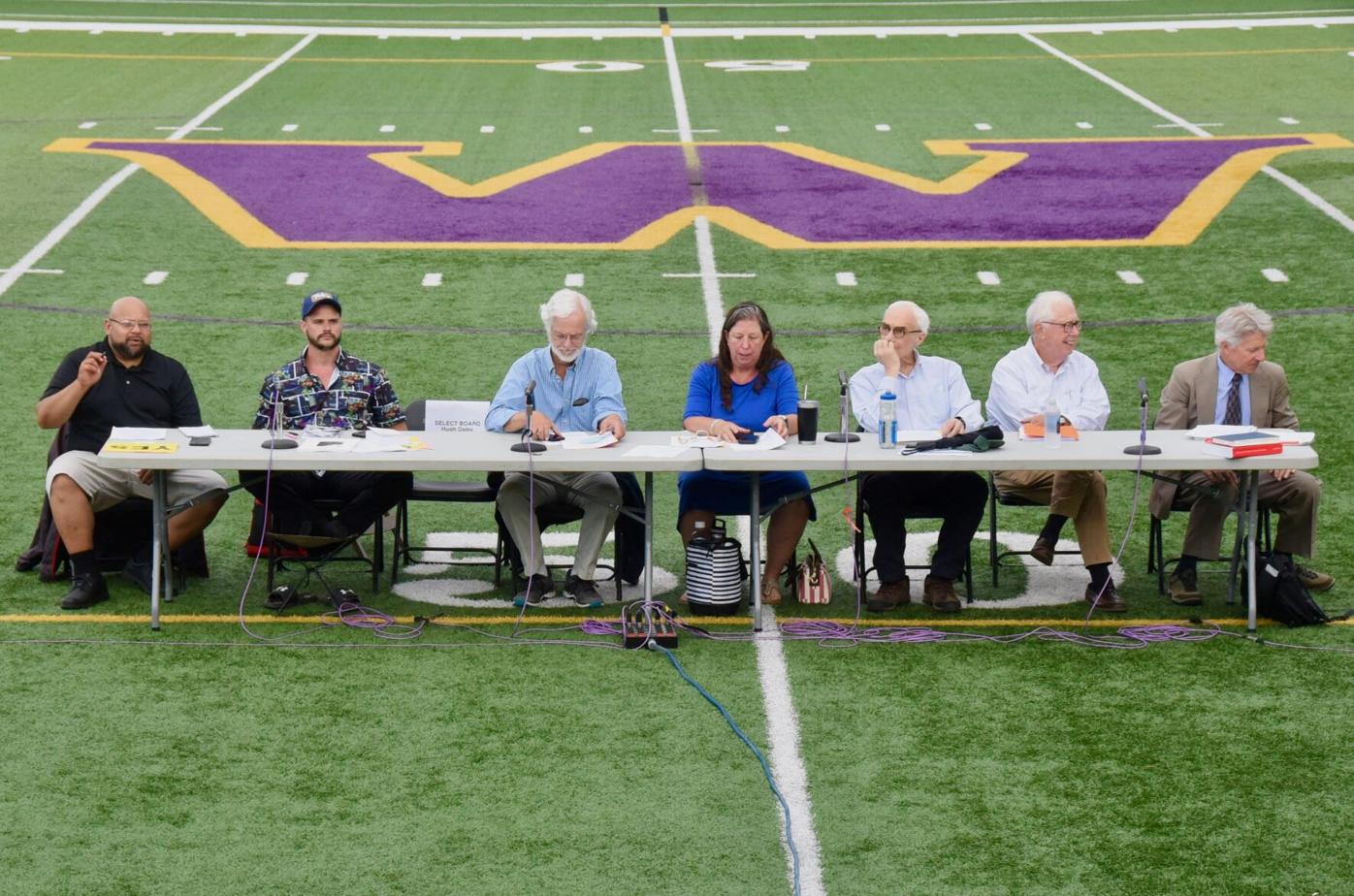 Members of the Williamstown Select Board and other officials await the start of the annual town meeting Wednesday night.

Williamstown voters make their decision known Wednesday on a number of warrant articles, including a change in the zoning bylaw to further regulate outdoor marijuana cultivation.

Members of the Williamstown Select Board and other officials await the start of the annual town meeting Wednesday night.

WILLIAMSTOWN — After about 40 minutes of debate at this year’s town meeting, two amendments were accepted and town voters approved a zoning bylaw amendment to regulate outdoor cultivation of marijuana in the residential/rural zones by a vote of 298-49.

Notably, the measure allows the maximum size of a canopy: up to 100,000 feet. A two-thirds majority vote was required for passage.

The Planning Board has been working on such a plan for several years. A previous proposal was defeated at last year’s town meeting.

Town meetings this year and last were conducted at the Williams College football field complex.

Opposition to the proposal centered around the idea that, as written, cultivation could be permitted close enough to the high school that odors could be detectable on school grounds. The potential for what some termed “dead skunk” smell near residential structures also was an issue.

Local attorney Stan Parese proposed to reverse the bylaw amendment’s allowance of cultivation by-right on any parcel less than 5,000 square feet. He wanted any size marijuana grow to require a special permit and evaluation by the Zoning Board of Appeals.

The Planning Board supported the amendment, and so did the voters.

Another local attorney, Anne Hogeland, proposed an amendment that would assure the town’s other ordinance regarding offensive odors also would apply to marijuana cultivation, doubling up on the odor provisions of the bylaw.

During a presentation from Ann Skinner, she referred to the potential smell generated by a marijuana grow as an “army of skunks.”

Another resident, Andrew Skinner, also was worried about the smell.

“The odors are real,” he said. “We’re talking about a dead-skunk stench for six to eight weeks.”

The Planning Board and the voters also supported that amendment.

Parese earlier ad tried to eliminate cannabis grows in the rural/residential district, but the moderator ruled that it was outside the scope of the proposal.

After that amendment was accepted, a voter called the question, forcing the vote, to rousing applause from the audience.

In other business, voters easily passed a raft of budgetary measures as proposed, including $19,000 to the Sand Springs Pool and Recreational Center, and $50,000 to the Williamstown Historical Museum to help pay for the preservation and relocation of the historic Dolan-Jenks Barn.

Overall, voters approved the annual budget of $8,446,654 for town operations and $12,346,994 to fund its share of the Mount Greylock Regional School District.

Scott Stafford can be reached at sstafford@berkshireeagle.com or