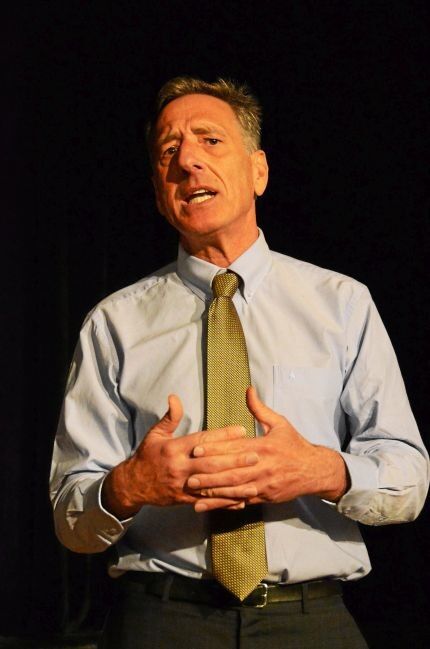 "I still attribute much of the work I do to what I've learned at Buxton," Vermont Gov. Peter Shumlin told students on Monday at the private school in Williamstown. 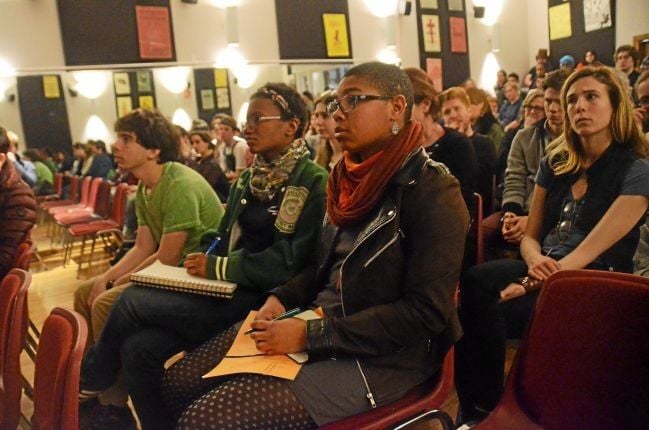 Buxton School students listen to Vermont Gov. Peter Shumlin, a 1974 graduate who paid a visit to the private school in Williamstown on Monday as part of the Alumni Speaker Series.

"I still attribute much of the work I do to what I've learned at Buxton," Vermont Gov. Peter Shumlin told students on Monday at the private school in Williamstown.

Buxton School students listen to Vermont Gov. Peter Shumlin, a 1974 graduate who paid a visit to the private school in Williamstown on Monday as part of the Alumni Speaker Series.

WILLIAMSTOWN >> After spending the morning touring around the Bennington, Vt. area to meet with business leaders on Monday, Vermont Gov. Peter Shumlin crossed the border to pay a visit to his old alma mater in the Berkshires.

The Brattleboro-born Shumlin, now 59, graduated from the Buxton School in 1974 with Peter S. Smith, the school's current director. He was invited to the independent school's bucolic South Street campus to speak as part of Buxton's Alumni Speaker Series.

The theme of this year's series is social justice and political activism. Previous speakers in the current series included Charlie Yedlin ('72) with his fellow representatives from Centurion Ministries, a nonprofit group that works to free the wrongly convicted and incarcerated; and Emma Weisman ('99), a lawyer who co-founded the disaster relief nonprofit, Communitere (www.haiti.communitere.org).

"I still attribute much of the work I do to what I've learned at Buxton," Shumlin told the several dozens of students, staff and faculty members gathered in the school's theater.

During his candid talk, the governor highlighted three values he learned and urged current students to embrace and maximize in their lives, while at Buxton and beyond. He then spent time taking questions from students and faculty, which ranged from inquiries about opioid distribution and addiction to climate change to how he handled the school's long-running assignment of reading of Leo Tolstoy's epic and daunting tome, "War and Peace."

Shumlin urged students to hold onto "that sense that we're responsible for things bigger than us."

"It's something you'll carry with you no matter what you become," he said.

The governor said it's that sense that's helped him to move matters in the state Legislature, from same-sex civil union and marriage equality laws to clean energy bills.

The second value he continues to employ is "learning to ask the hard questions," such as what his state was doing wrong in its response to a burgeoning opioid and heroin problem.

"We had to change the way we had dealt with this disease," Shumlin said. "So we changed the system, built treatment centers, started talking about it, and changed the way we prosecute opioid cases."

The last value he emphasized is one he's used to address another kind of addiction in the nation, "to oil and coal." Shumlin spoke with urgency about the need to address and innovate ways to prevent the potentially devastating effects of climate change.

"In this life, you better be willing to take on the big problems," he said, "and perhaps make some enemies."

Vermont's 81st governor closed out his time on campus by sharing some personal details of his life that some students said they could relate to.

For example, Shumlin revealed that in second grade, he was found to have dyslexia and struggled with reading.

"I wasn't a stellar student," he said, citing how he had lagging SAT scores and that many of his teachers did not expect that he would be college-bound.

He noted that former Buxton Director Benjamin Fincke — whose assignment to read "War and Peace" might not have been completed by Shumlin — helped him enroll in Boston University's two-year General Studies program. The governor said it was that extra step that provided needed support and motivation to help him improve in his studies. He ultimately transferred and graduated from Wesleyan University.

Buxton 10th-grader Cheyanne Williams said Shumlin "gave a really nice presentation" and said she appreciated how he spoke to their interests, "something a lot of adults don't do."

For freshman Renaldo Payne, who identified himself as being gay and also having dyslexia, the governor's talk struck a personal chord.

"Today was really eye-opening for me," Payne said. "[The governor] seems to be addressing things that really affect the world."

Shumlin, in closing, urged students to "make a difference in each others lives as you learn and as you grow."

"And if you don't choose to run for office," he said, "you better be involved and have your voices heard and speak up."