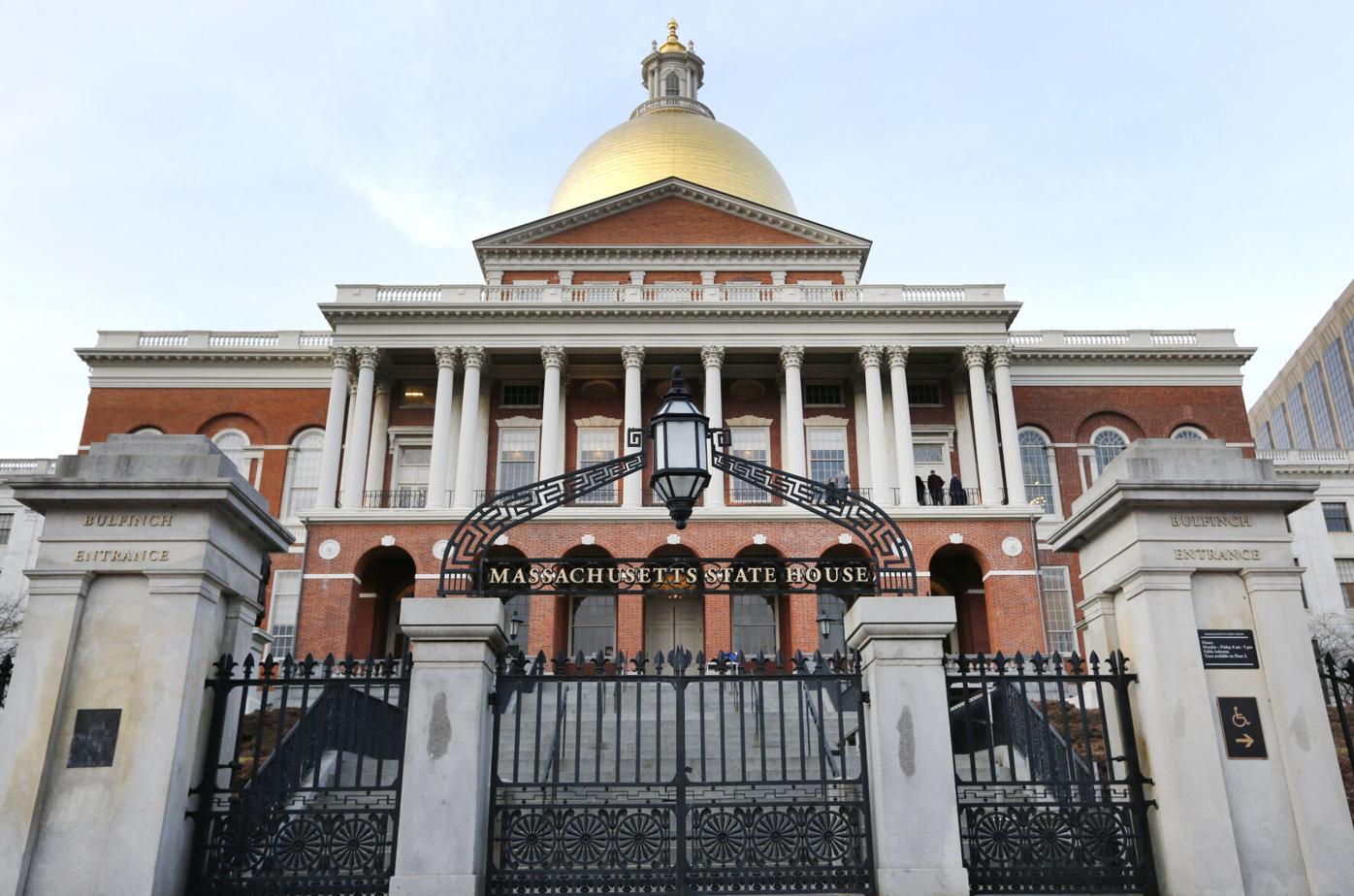 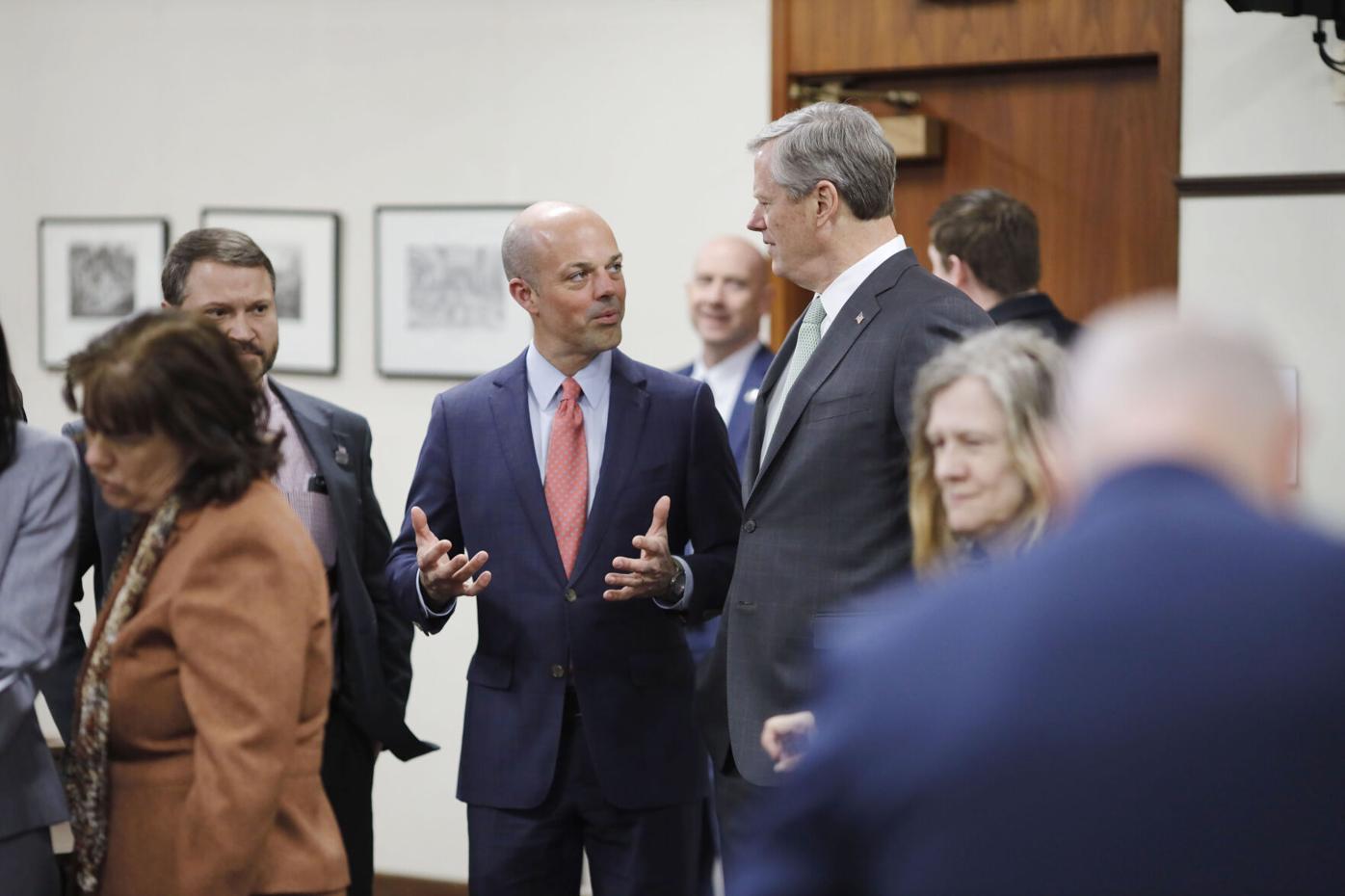 State Sen. Adam Hinds, center, talks with Gov.Charlie Baker before a meeting in February. Hinds talked with The Eagle about the state’s proposed budget, and said that new revenue strategies are on hold for a year as the state targets investments toward coronavirus-related needs. Much of this year’s budget draws from one-time funding sources.

State Sen. Adam Hinds, center, talks with Gov.Charlie Baker before a meeting in February. Hinds talked with The Eagle about the state’s proposed budget, and said that new revenue strategies are on hold for a year as the state targets investments toward coronavirus-related needs. Much of this year’s budget draws from one-time funding sources.

For the $46 billion state budget, which has cleared both the House and Senate, lawmakers opted primarily to draw from one-time funding sources rather than generate new revenue.

The Senate budget would take $1.5 billion from the rainy day fund while raising over $400 million in new revenue from increasing ride-sharing fees and accelerating the sales tax schedule. The House did not include the hike in ride-sharing fees, and a six-person conference committee will reconcile the branches’ differences before the budget heads to Gov. Charlie Baker.

Hinds, who chairs the Senate’s revenue working group, said the pandemic-induced recession “really points in the direction of needing new revenue.” He said the group is on track to deliver revenue proposals in January ahead of next year’s budget debate.

“In every major recession in the past generation, it is typically the case that new revenue was raised,” he told The Eagle, noting new revenue helps to sustain “critical investments.”

Yet by foregoing additional revenue this year, the state missed an opportunity to commit more resources to long-term needs the pandemic has exacerbated, said Phineas Baxandall, a senior analyst at the Massachusetts Budget and Policy Center.

“There definitely are meaningful sprinklings of money, and that will help,” Baxandall said. “While there was fear that the budget could have been worse, to really move the needle you would’ve needed new revenue.”

The state did not fully fund the first year of the Student Opportunity Act, a landmark 2019 law that would have cost over $350 million this year to begin implementation.

“This money is particularly needed for low-income districts, which are the ones hit hardest by the coronavirus,” Baxandall said, adding people of color have been disproportionately impacted by the pandemic. “So they’re getting hit on both ends.”

Lawmakers sought to make up the gap through other means, with House Speaker Robert DeLeo noting the House version spends an added $80 million on educational support programs.

The Legislature fulfilled its commitment to increase K-12 education funding $107 million from last year to account for inflation. Federal aid also gave Massachusetts schools $193 million and up to $225 per student for COVID-19 safety, Hinds said.

Hinds said that since this year’s budget draws heavily from one-time sources, and that the economy received a $30 billion infusion of federal funding unlikely to be replicated in future years, it made sense to save new revenue for future budgets.

“Holding onto the tools that might allow us to bring new revenue to the table in the next fiscal year is actually an important strategy to us,” Hinds said Tuesday on the Senate floor, praising the budget’s investments in housing, food security, child care, economic development, public health and education. “It’s a way to maintain those critical investments next fiscal year and beyond when we do not have the present levels of external support.”

Baxandall, however, argued more revenue this year could have meant greater investments going to residents who need support now.

“Even if [raising new revenue next year] works, it doesn’t really help the people who may get evicted this year and it doesn’t help the kids who are going to have inadequate schooling,” he said. “You don’t get that year back... That’s something which works better on the accounting ledger than it does on the experience of people.”

He said raising rates on unearned income, as well as taxing offshore holdings of multinational corporations could generate resources without hurting those hit hard by the pandemic.

Hinds expressed hope that next year’s revenue discussion would take into account a shifting economy that he said “is increasingly putting the little person and the small business under the gun.”

While Senate budget discussions saw fewer amendments than in most years, Hinds successfully proposed to establish a trust fund to stabilize summer camps and to bump rural school aid from $1.5 million to $3 million.

“Our funding formula disadvantages rural schools, and I am glad that my colleagues now accept for the third year in a row that we need an additional support for rural schools,” Hinds said.