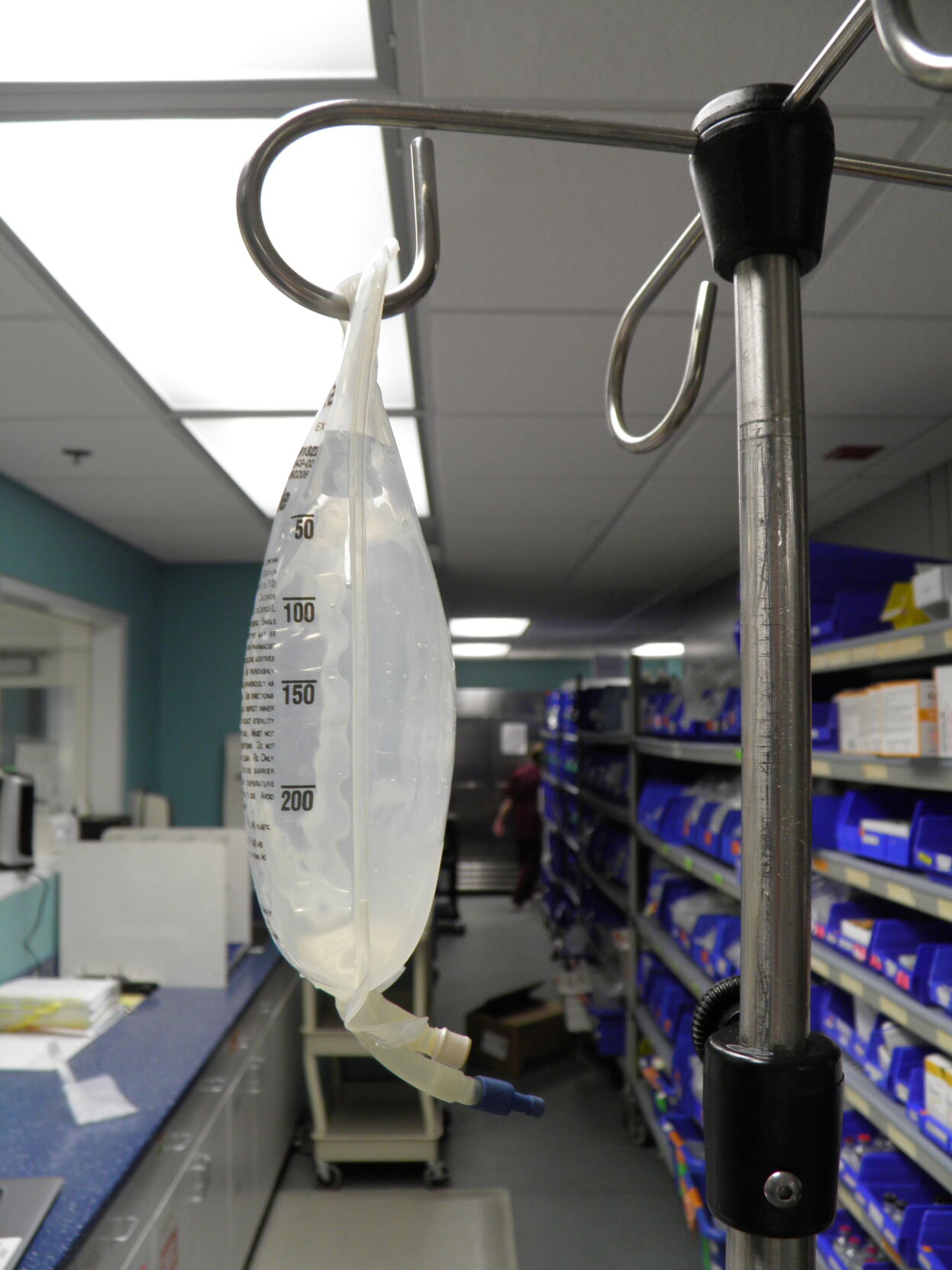 Monoclonal antibody therapy, a recent COVID-19 treatment approved for emergency use, might help some high-risk patients recover at home. So far, more than two dozen patients in the Berkshires have received the therapy since Berkshire Health Systems began to offer it in early December. 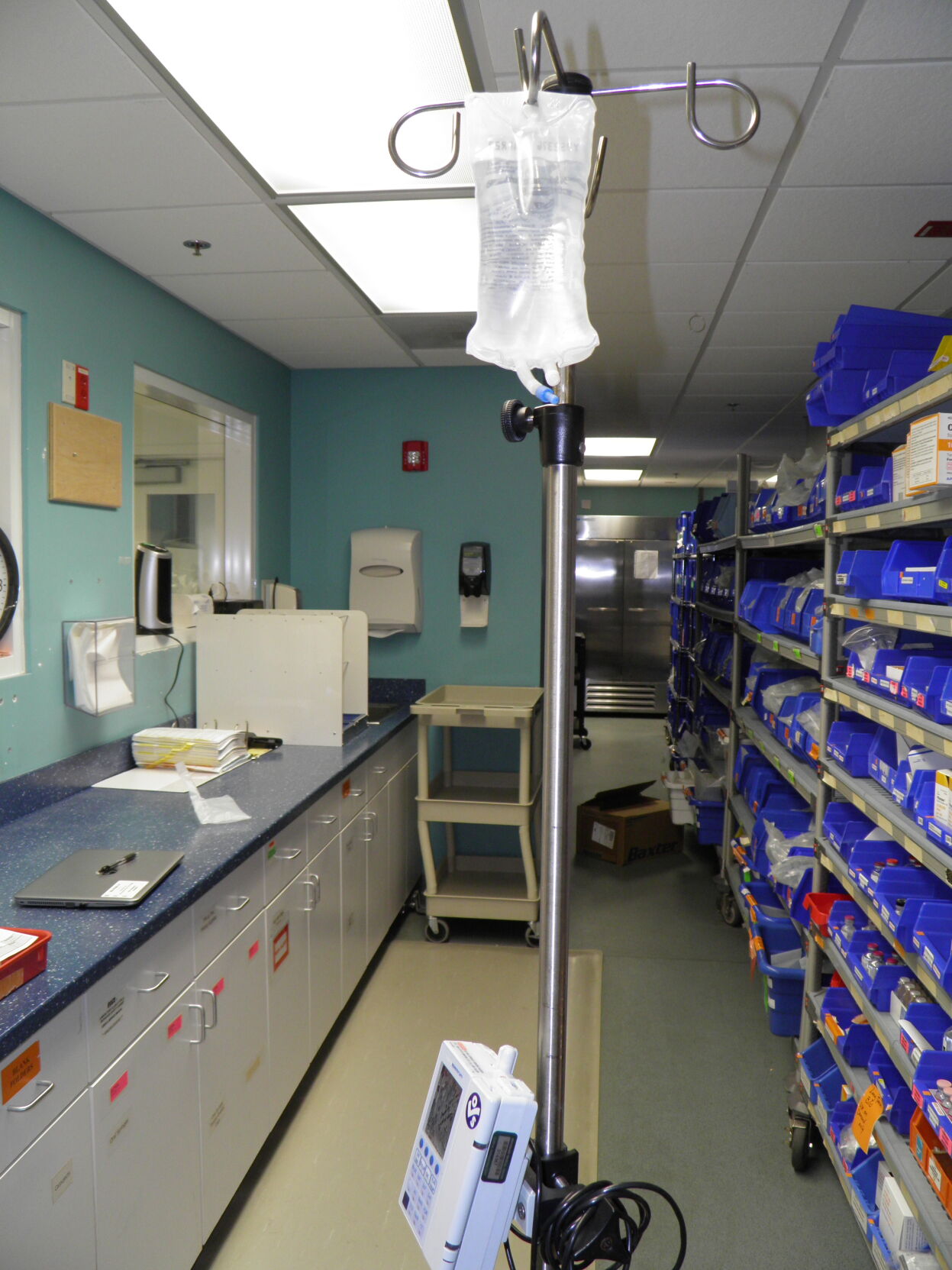 Early studies appear to show that monoclonal antibody therapy reduces hospital admissions in high-risk COVID-19 patients, though the federal government has warned that there is very little data yet. The therapy is administered through an IV, which makes it more challenging to reach outpatients.

Monoclonal antibody therapy, a recent COVID-19 treatment approved for emergency use, might help some high-risk patients recover at home. So far, more than two dozen patients in the Berkshires have received the therapy since Berkshire Health Systems began to offer it in early December.

Early studies appear to show that monoclonal antibody therapy reduces hospital admissions in high-risk COVID-19 patients, though the federal government has warned that there is very little data yet. The therapy is administered through an IV, which makes it more challenging to reach outpatients.

David Kolis had chills, a high fever and a deep cough as he drove himself to the hospital this month.

A week into the 63-year-old’s fight with COVID-19, his doctor called to tell him there was something that might help. Monoclonal antibodies therapy, a treatment that President Donald Trump received during his illness, finally was available for widespread emergency use. And Kolis was eligible.

“I was very sick,” Kolis said. “Any help I could’ve got was well-appreciated.”

The therapy would try to give his immune system an assist by mimicking the natural antibodies that he would produce over the course of the illness.

But, to receive the drug, Kolis had to get himself to Berkshire Medical Center. His wife was in the emergency room with her own symptoms, so, he decided to drive there from their home in Adams.

AM I ELIGIBLE FOR MONOCLONAL ANTIBODY THERAPY?

According to the Food and Drug Administration, you are eligible for monoclonal antibody therapy if you are at high risk for progressing to severe COVID-19 and/or hospitalization but are not yet hospitalized or on acute oxygen therapy.

High risk is defined as patients who meet at least one of these criteria:

• Are 55 or older and have one or more of the following: cardiovascular disease; hypertension; chronic obstructive pulmonary disease/other chronic respiratory disease

The therapy was so new that staff were still setting up an outpatient clinic when Kolis arrived at the hospital, he said. Health care workers in full personal protective equipment gave him an IV and checked his vitals every 15 minutes for a little over an hour. After a period of observation, he went home.

More than two weeks later, Kolis still has shortness of breath and a persistent cough. But, he pulled through the disease without ending up in a hospital bed.

“I was very happy that he was able to get this treatment,” said Pat Kolis, his wife, who recovered from her own milder case. “But, I think if he’d gotten it even a couple days earlier, if it had been available, it would have been even better.”

For the first time, doctors have a therapy that can help COVID-19 patients who are not yet sick enough to be hospitalized, and health care workers around the country have rushed to promote the new treatment.

“We now have much better inpatient management than we did when this started,” said James Lederer, chief medical officer at Berkshire Health Systems. “But, we haven’t had anything for the ambulatory world. We say, “You’ve got a virus, go home, rest, take Tylenol and call us if it gets worse.’”

Monoclonal antibody therapy could be that answer — for some patients.

“With all of our therapies, we have to prove a greater good than harm,” Lederer said. “With this, we’re hopeful. Is it a strong therapeutic option or is it mild? It’s probably more on the mild side.”

Nationwide, the promising therapy has been met with lackluster demand so far. In Berkshire County, about 40 people have received the monoclonal antibody drug bamlanivimab, according to the hospital system. About two-thirds of recipients have been residents of nursing homes and assisted living facilities, the majority of those from the Williamstown Commons Nursing and Rehabilitation Center.

The hospital said it has been working through its allotted doses slowly — that’s about 20 infusions each week — and hopes to see increased demand.

“The state recognizes it’s more difficult to get this out and used than they had thought, so, they’re asking us if we want more,” Lederer said.

One challenge for the hospital is simply getting the word out to patients who are not in nursing homes. Kolis only heard about the treatment because he happened to tell his doctor he had tested positive. Many patients receive positive test results without looping in their primary care physician.

Like Kolis, patients also have to get to a hospital to receive the drug from an IV. For someone infected with COVID-19 who does not want to risk a hefty ambulance fee, that is no small hurdle.

Despite those logistical complications, Berkshire Health Systems hopes the treatment could help more patients fight the disease in its early stages and, in turn, reduce hospital admissions.

Since the early stages of the coronavirus pandemic, doctors have been giving “convalescent plasma” to hospitalized patients, which involves an infected COVID-19 patient donating blood, containing all the antibodies their body developed, to other patients.

Monoclonal antibody therapy resembles a more targeted version of that treatment. It involves a single antibody, manufactured in a lab, and designed to stop the virus from attaching and entering into human cells. Unlike convalescent plasma, in which the treatment can differ, depending on the donor, each dose of a monoclonal antibody drug is identical.

Early trials from Regeneron and Eli Lilly, pharmaceutical companies that developed the new drugs, found that monoclonal antibody therapy appears to reduce hospitalization rates in high-risk patients, though it has no proven benefit for patients already hospitalized.

“There’s a sweet spot, an opportunity to use this on outpatients,” Lederer said. “In the hopes that the presence of the antibody will protect them from worse disease, so they can stay home, continue to recover and never have to become an inpatient.”

Monoclonal antibody therapy is intended for patients 65 and older, obese, and/or suffering from certain medical conditions that put them at a higher risk. The federal government has provided doses of the drugs for free to states, which means patients should only be on the hook for the cost to administer the drug. For Medicare patients, the treatment is free.

But, the therapy still is experimental, and the National Institutes of Health have warned that there is not enough evidence to show whether the new drugs are effective.

“It’s not a risky therapy,” Lederer said. “We haven’t seen any real complications. But, any therapy, even taking a Tylenol, has risk. … If I can’t show a definite benefit, I have no business giving that drug.”

So far, Lederer says, none of the drug’s early recipients has been hospitalized.

"It's not a risky therapy. We haven’t seen any real complications. But, any therapy, even taking a Tylenol, has risk. … If I can’t show a definite benefit, I have no business giving that drug."

Just in time for an outbreak

Limited evidence from Williamstown Commons might also demonstrate a potential benefit, though Berkshire Healthcare Systems, which owns the facility, warns that it still is too early to draw conclusions.

Berkshire Health Systems offered Williamstown Commons the therapy just as the facility identified a cluster of cases in early December. At the time, there were enough health care workers to head to Williamstown and administer the drug at the facility.

Of the 25 residents who received the therapy in early December, none has been hospitalized or died.

“All of them are doing well,” Burt said. “And, out of that many elderly patients, you’d expect someone to not do well. So, it’s encouraging.”

Burt cannot say for sure whether the drug helped Williamstown Commons avoid a repeat of its deadly outbreak in the spring. Still, the facility has remained at zero deaths this fall, a stark contrast to more than 50 combined COVID-19 deaths at Kimball Farms and Hillcrest Commons.

“The science is that it’s too early to tell,” Burt said. “Technically, in an experiment, you need a control group that’s getting a placebo — and nobody’s going to do that in the middle of a pandemic.”

Just as with the new vaccine, Burt said, there might be risks accompanying this therapy that were not identified through clinical trials and early use. Like his counterparts at the hospital, all he can say for certain is that there have been no negative reactions so far — and the drug appears to do more good than harm.

“What doesn’t happen is a very difficult thing to say,” he added. “But, I’m cautiously optimistic.”

Berkshire Health Systems encourages any residents who test positive and might be eligible for the treatment to contact their primary care physician.