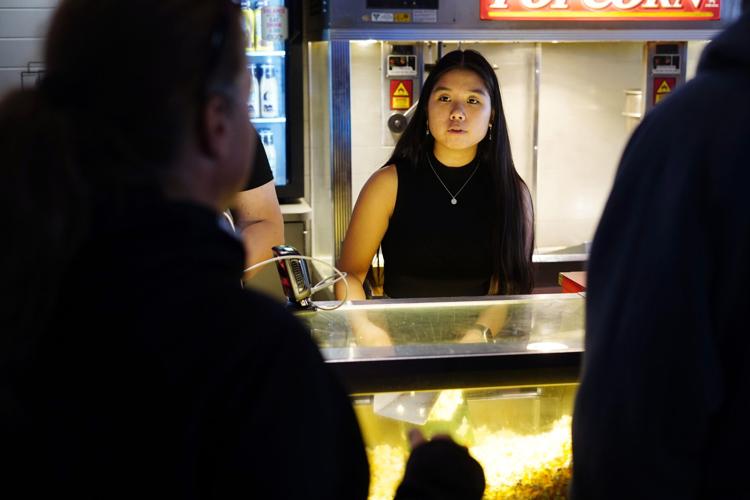 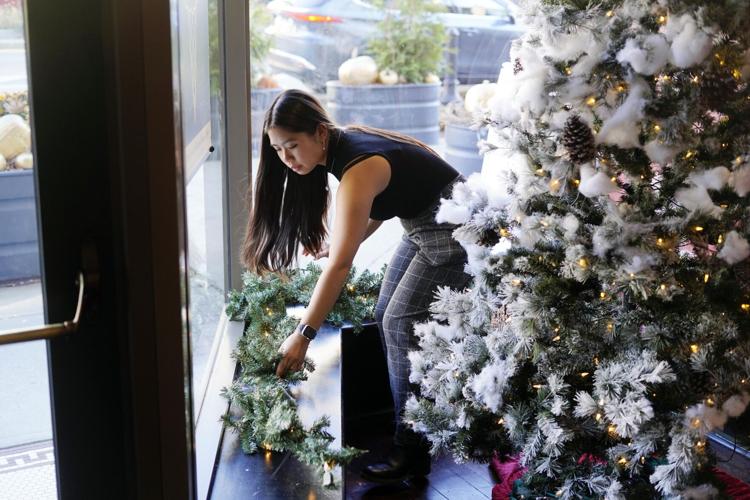 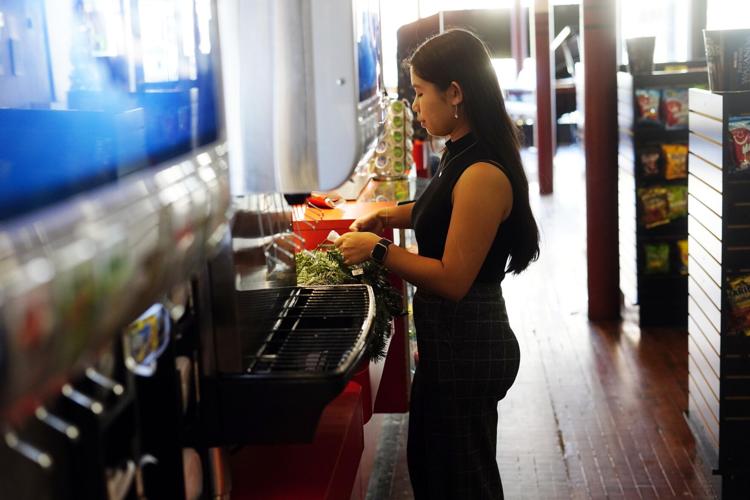 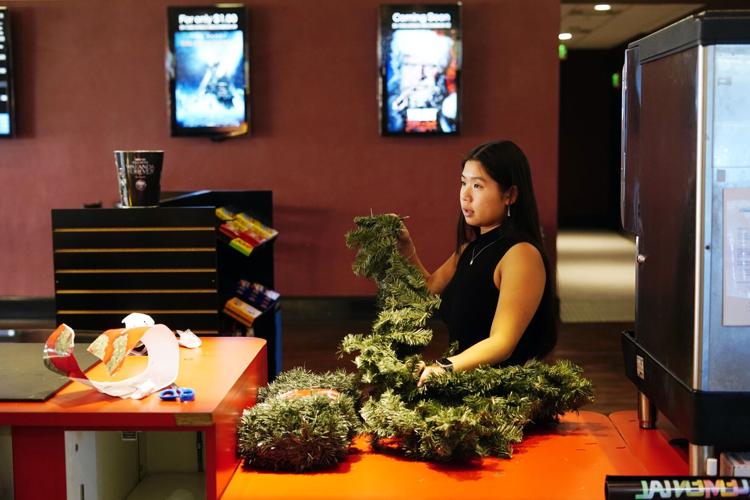 Some days, she works doubles, running from the cinema where she’s worked since high school up to the Mohawk Tavern. And amid the hustle, she is attending school at Berkshire Community College.

The 20-year-old graduated high school in 2020, when the pandemic upended her senior year and introduced a new set of stressors to her financial situation. The Beacon Cinema, where she works full time, was shut down for months, and she looked to the gig economy to make ends meet, becoming a driver for Instacart.

She has her eyes on a bachelor’s degree from Williams College, or maybe somewhere in Boston.

Creamer is one of a growing number of people in the Berkshires and around the country who work multiple jobs just to make ends meet. Financial pressures only deepened for many during the COVID-19 pandemic, when service-industry jobs were leveled for months, and demand slow to return.

"The one thing that's completely clear is that wages are not keeping up with the increasing cost of everything." Eve Weinbaum, an associate professor at UMass Amherst

Costs are rising — with inflation up almost 8 percent in October — yet wages haven’t kept up, said Eve Weinbaum, an associate professor at UMass Amherst who studies labor, organizing and low-wage workers.

The cost of necessities like housing and heating oil is up even more than that, she said, yet “almost nobody got an 8 percent raise in the past year,” not even union members where an organized mechanism exists to negotiate higher pay.

“The one thing that’s completely clear is that wages are not keeping up with the increasing cost of everything,” she said.

While having to work more than one low-wage job to make ends meet is not a new phenomenon, rapid inflation over the last year has increased strain on workers and crystallized economic inequities, which Weinbaum said set the stage for the recent wave of union organizing across the public and private sectors.

The working class must devote a larger percentage of their income to things like food, housing, gas and oil — goods and amenities whose prices have risen the most quickly.

“Because the price of necessities has gone up more quickly than the price of luxury goods, working people are hit harder by inflation,” Weinbaum said.

According to the U.S. Census, nationwide around 9 percent of U.S. women, like Creamer, work multiple jobs. She sees no end to her hectic schedule anytime soon.

She says she has a high-stress relationship with money, a drive to feel secure as she works her way to, she hopes, a higher-paying job in the medical field.

The stressors and unknowns of life have complicated her financial situation, she said. Last spring, she fell into a depression. She had a stressful move to a new apartment, and her bank account was hacked. She lost $5,000 in savings through three fraudulent transactions that her bank eventually reimbursed around three months later.

Her grades slipped, and she lost her financial aid, meaning she had to add tuition to the list of her living expenses. Creamer makes trips to area food banks to fill in gaps when she can, picking up staple nonperishables from BCC and other items from the Christian Center.

Even that can be a challenge, however, because a lot of the time the pantries are closed during the windows of time when she’s not at work or school. Many of those items feed the daughter of her boyfriend, with whom she shares an apartment in North Adams.

Creamer finds herself hyperfixated on her finances, especially when her weekly bills exceed her earnings.

“I’m so busy that I feel like I can never take the time off. I’m just trying to like work to invest in my future to hopefully go away to college,” Creamer said.

‘Inflation is killing the poor’

Despite working 80 hours a week as a housekeeper at Canyon Ranch, Maribel Polanco, who said she earns wages just above minimum wage, said she is forced to make decisions about which bills to pay when, with for gas and electric rise.

The pandemic taught many employers that they could get away with having fewer workers, meaning the workers who did stay on were forced to do the work of more than one person.

Meantime, Weinbaum said the well-earned accolades that had been given to workers deemed “essential” during the pandemic have dried up, and so many laborers are frustrated wondering why there’s no recognition, and no wage increases that keep pace with the rise in costs of living.

Jennifer Odegard, 59, moved to the Berkshires in throes of the coronavirus pandemic, picking north county as a central locus nearer to family in Boston, Brattleboro and New York City. It was also a place she thought real estate would be more affordable.

And it was, on the surface. She bought an old home in North Adams that ultimately required more deferred maintenance than she expected. So she rents her spare bedrooms to nursing students, and her father lives downstairs.

In the multigenerational household, her father pitches in financially, and she provides the roof over his head, does the grocery shopping and helps him with daily tasks.

“We cram in like sardines, but we make it work,” Odegard said.

She makes a piecemeal living as a massage therapist, but due to the particularities of interstate licensing, must travel to Vermont to meet clients, a commute she says gets hairy in winter.

Her life has been long and varied, she said. After Odegard graduated from college with a social work degree, she was able to buy a home for $59,000 in Tennessee, having no trouble making her monthly $500 mortgage.

The average home sold for $303,453 in Tennessee as of October, according to Zillow.

Then came a move to Colorado, where she managed a vintage store for a nonprofit. Her last stop before the Berkshires was in California, where she built up her own massage business, but then lost her home in the catastrophic Camp Fire of 2018, the deadliest wildfire in the state’s history.

She lived in a trailer near her office until the early days of the pandemic.

“I’ve started over too many times,” she said.

Her current living situation is not what she envisioned for herself at this stage in her life. The taxes are high, the monthly winter heating oil bills top $800, and the roommates numerous.

Growing up in a different world

Her son, Chris, 35, is a member of a generation saddled with student loan debt. She said he makes ends meet, can pay his bills, but manages to pay just the minimum monthly payment on his student loans.

Chris has been making a $300 monthly minimum payment for the last 10 years, and doesn’t think he’ll ever be able to increase that sum enough to outpace compound interest and make a dent in the principal loam amount.

He tells her that he doesn’t envision himself ever being in the financial position to purchase a home of his own and start a family.

Odegard said she didn’t understand the realities of college loan market when her son was going off to college. When she went, college was less expensive, and she said her loans were completely funded by the federal government, rather than private lenders.

She feels guilty that she didn’t counsel him to take a different route.

“I would have said, ‘No, no, no, just go to college, don’t go to an expensive, fancy college, just go to a college and get the degree,” she said. “But I didn’t, I don’t know — I grew up in a different world.”

Having lived in various states, Odegard is glad to have access to MassHealth, the state’s public health care option. It places beneath her a sheath of security, no matter how thin. “It’s a security net, but it’s minimal, it’s a bare bones safety net,” she said.

“But I’m just very thankful it’s there,” she said.