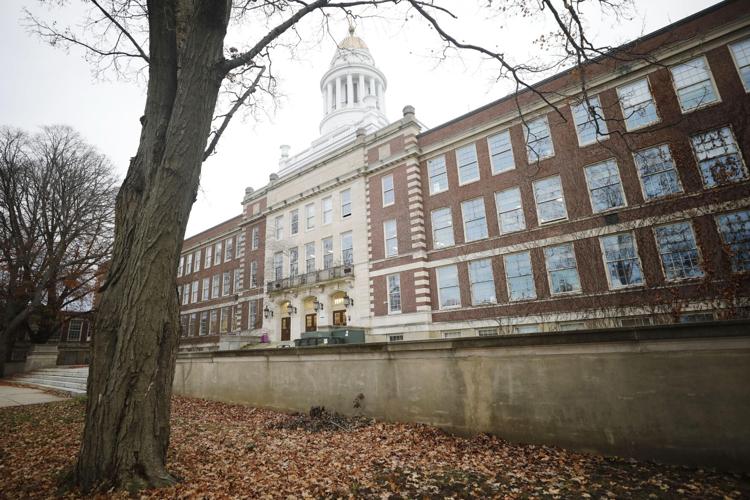 Administrators with Pittsfield Public Schools say that declining enrollment, increasing contractual costs with staff and changing post-pandemic learning needs are behind their initial request to increase the district’s budget by $5.08 million next year. 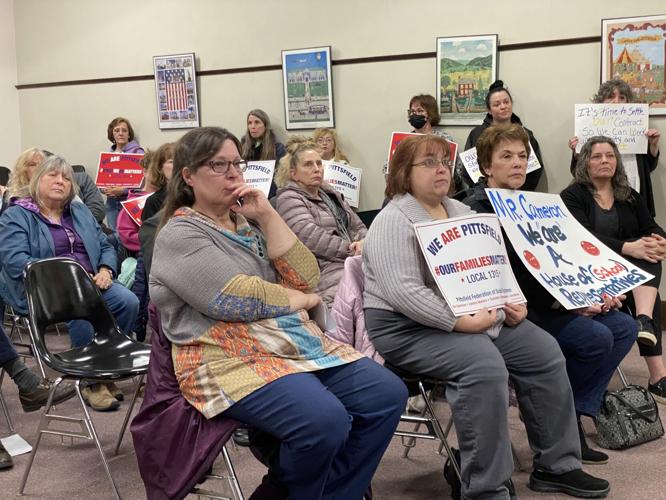 District officials say the budget also includes salary dollars for members of the Pittsfield Federation of School Employees — the union representing support staff. Though representatives from PFSE are pushing back on what the district is offering by saying it's below a living wage. Members from the union gathered during the School Committee meeting last week to urge the district to compromise ahead of the PPS budget talks. 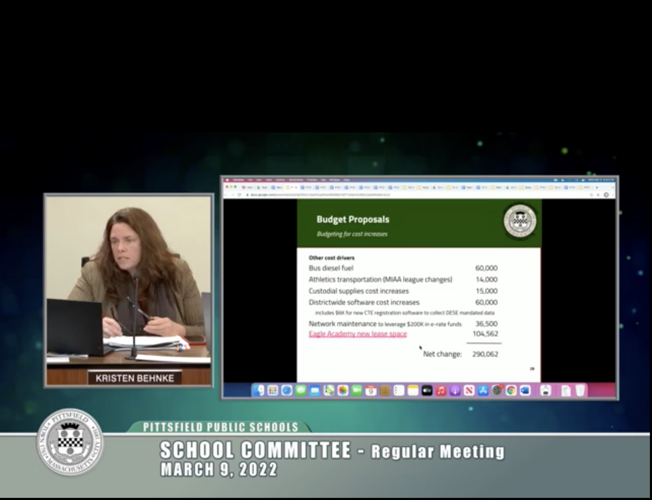 Assistant Superintendent of Business and Finance Kristen Behnke said typically school district budgets increase about 2.7 percent in any given year, so the 7.5 percent or $5 million increase is “unprecedented.”

Administrators with Pittsfield Public Schools say that declining enrollment, increasing contractual costs with staff and changing post-pandemic learning needs are behind their initial request to increase the district’s budget by $5.08 million next year.

Assistant Superintendent of Business and Finance Kristen Behnke said typically school district budgets increase about 2.7 percent in any given year, so the 7.5 percent or $5 million increase is “unprecedented.”

PITTSFIELD — Administrators with Pittsfield Public Schools say that declining enrollment, increasing contractual costs with staff and changing post-pandemic learning needs are behind their initial request to increase the district’s budget by $5.08 million next year. 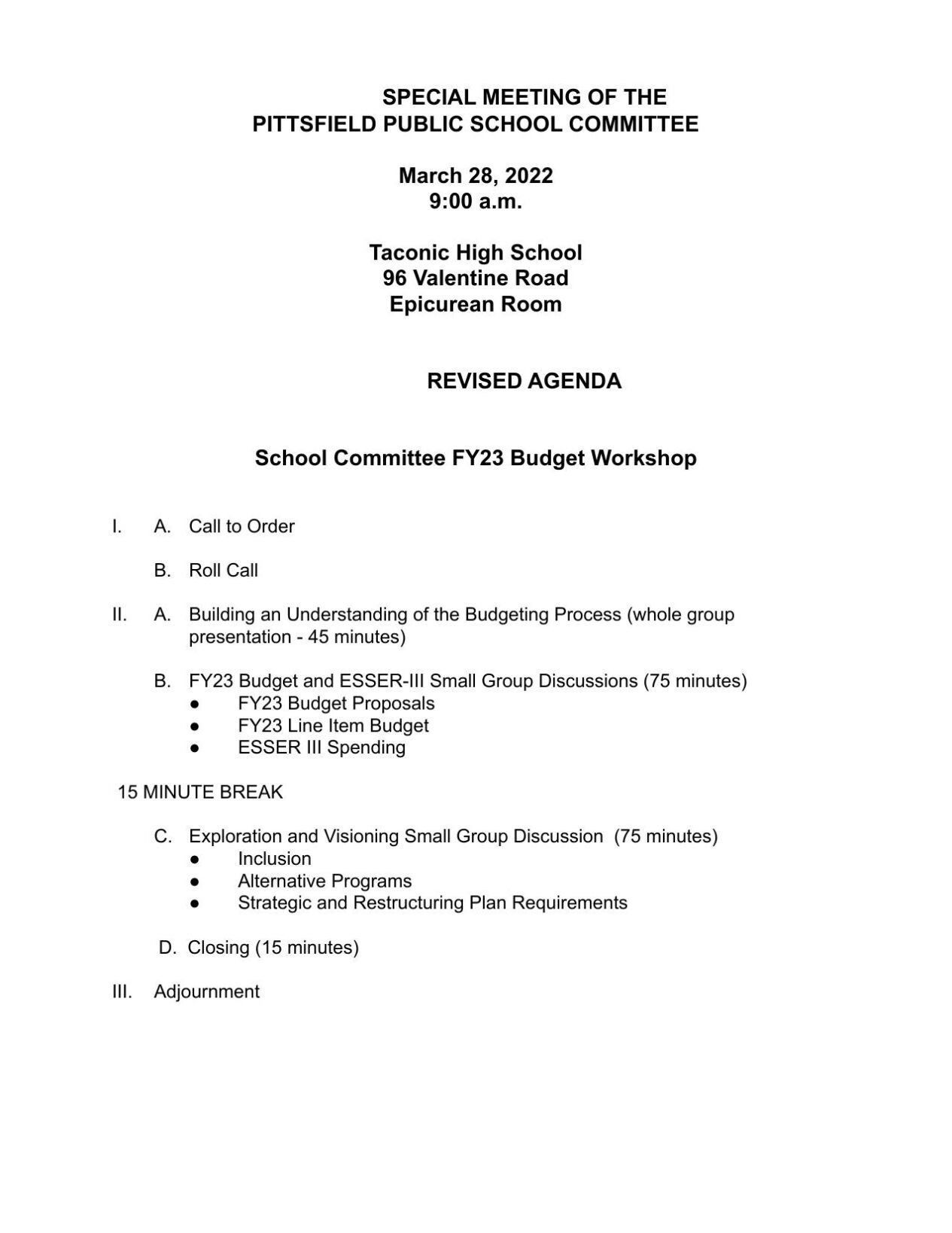 The $72.3 million draft budget represents a more than 7.5 percent increase in the money the district is asking for from the city.

School committee members, district department heads and school principals will gather Monday at Taconic High School for a four hour budget workshop — open to the public — to pore over the numbers. Here’s what you need to know about the dollars and cents they’re discussing.

How much money is the district asking the city for?

Assistant Superintendent for Business and Finance Kristen Behnke said typically school district budgets increase about 2.7 percent in any given year, so the 7.5 percent or $5 million increase is “unprecedented.”

Though Behnke and Superintendent Joe Curtis reasoned with the School Committee during recent presentations of the proposal and education funding that changes to state education funding — known as Chapter 70 — will actually only require the city council to raise $492,336 over what Pittsfield will get from the state this year in education funding.

“This [increase] is not at all a normal amount, but we also did not receive a normal amount of increase in the chapter 70 funds,” Behnke said during last week’s School Committee meeting. “The increase in Chapter 70 under the governor’s budget will fund all but about $492,000 of this.”

The district is seeing increasing equipment, gas and software costs as the general cost of doing business in a pandemic economy continues to rise. But for the most part, the money the district is requesting this year is going to salaries. Salaries represent about 84 percent of the total proposed budget at $61 million and about 80 percent of the budget increase this year.

Teacher salaries represent the largest segment of the salary increases. In February the United Educators of Pittsfield — which represents PPS teachers — negotiated a new three-year contract with the district. The new contract guarantees members of the union a 3 percent salary increase each year.

Teacher salaries in the new proposed budget are expected to increase by about $429,000 to $26.4 million in the next fiscal year. While the salaries for the 374 teachers is a sizable chunk of the district’s budget, the new total of $26 million is only about a 1.65 percent increase over this year’s budget.

So why aren’t we seeing a 3 percent increase in this line item? That’s because the district is actually planning to lower the number of teaching positions next year by 15 positions.

District officials say this budget also includes an increase for educational support staff, though negotiations between the district and members of the Pittsfield Federation of School Employees are far from settled over salary figures.

Does that mean layoffs?

The superintendent said that no "pink slips" would be going to district staff over this proposal and that the changes would be accomplished primarily through one year appointments, retirements and attrition.

“We want to send that message clearly to our entire education staff, that this is not a time where layoff slips or pink slips, as they're often called, will go out,” Curtis said. “That’s not how we’ll approach this.”

Curtis said the staffing changes were being suggested in response to enrollment data that shows the student population decreasing by almost 89 students next year.

The city has weathered two years of a global pandemic with a strong financial position and sound financial policies according to the city's auditor and finance director.

Superintendent Joseph Curtis has said that salary increases in the Pittsfield Public School's proposed FY23 budget are some of the largest in recent history. Members of the Pittsfield Federation of School Employees say they've been left out of those increases and are asking district officials to meet their request for higher wages.

The Pittsfield School Committee and Pittsfield Federation of School Employees — one of three district employee unions — will being working with a mediator from the Massachusetts Department of Labor Relations in two weeks over longstanding contract disputes.

The Pittsfield School Committee approved its fiscal 2023 operating budget in a vote of 6-0 Wednesday night. The budget allocates most of its $73 million to staff salaries, rising transportation and material costs and a program to end the student athletic fee.