PITTSFIELD — Consultants hired by the Pittsfield Public Schools to look at school safety issues have started to share their findings with district leaders after more than six months of study and community conversations.

The full report is still a little ways off, but Superintendent Joseph Curtis sent the summary of the findings to families and staff on Friday as part of his weekly superintendent update. During the School Committee meeting last week, Curtis promised a more robust and detailed presentation on the findings would be given at the committee's next meeting on May 11.

District leaders have said since the study began in September that its focus was about the myriad of things that make up school safety — things like school culture, support programs, discipline policies — and not just school resource officers.

But the reignited debate over the relationship between the Pittsfield Police Department — which supplies the district with SROs — and the greater Pittsfield community has made SROs the star of the report. 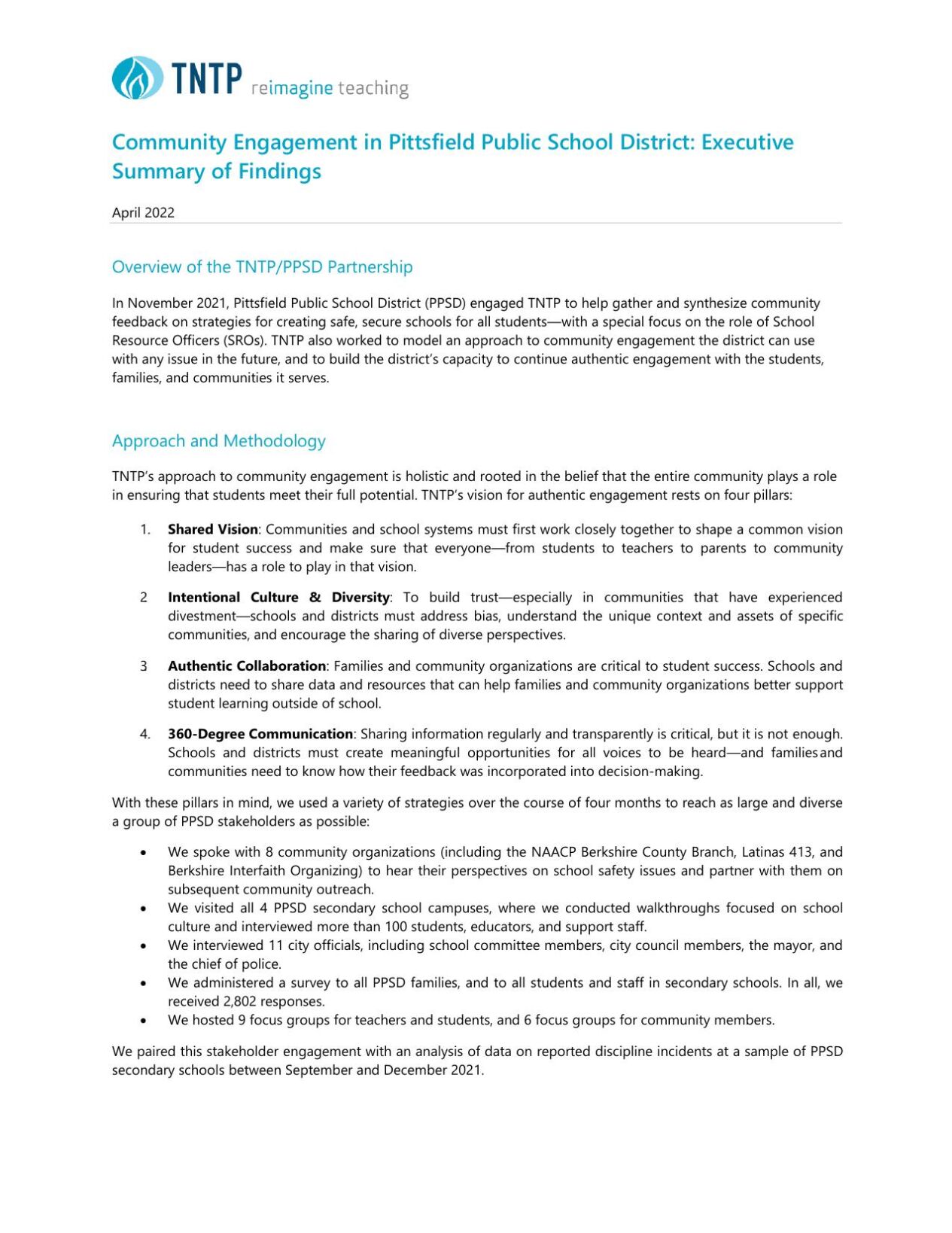 The summary of the results says that 74 percent of families and 69 percent of staff members indicated that they strongly agree or somewhat agree with the statement that they feel safe with an SRO on campus.

While the adults surveyed clearly favored SROs, the same cannot be said of students — particularly students of color.

By the smallest of margins — two percentage points — students generally said that they feel safe with SROs overall.

TNTP, the consultants who undertook the study, write in the executive summary of the report that their "findings paint a complicated picture of a complicated issue."

The summary notes that while there's a range of opinions on school safety in the district "the opinions appear to be most negative among historically marginalized communities."

That there is a separate and distinct experience for PPS students of color and from marginalized communities is further highlighted in the summary of disciplinary data.

TNTP found that students "identified as male at birth, Black and multiracial students, and students from low-income families may appear to be overrepresented in" disciplinary incidents.

The consultants looked at the full range of disciplinary reports, including what Curtis described to the School Committee as reports for things that "happened within a classroom, but are also solved within the classroom."

TNTP found that though Black and multiracial students make up 22 percent of middle and high school enrollment, these students currently account for 31 percent of reported incidents at these schools.

To read the full executive summary of the school safety report and a brief description of the methodology click here.