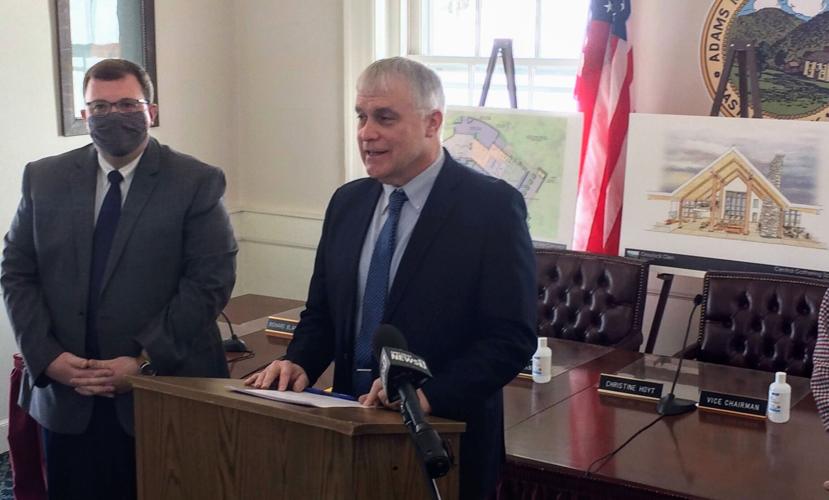 John Duval, chair of the Adams Select Board, announced Wednesday that an additional $2.8 million in state funding means that construction of an outdoor center at the Greylock Glen area "is a go." 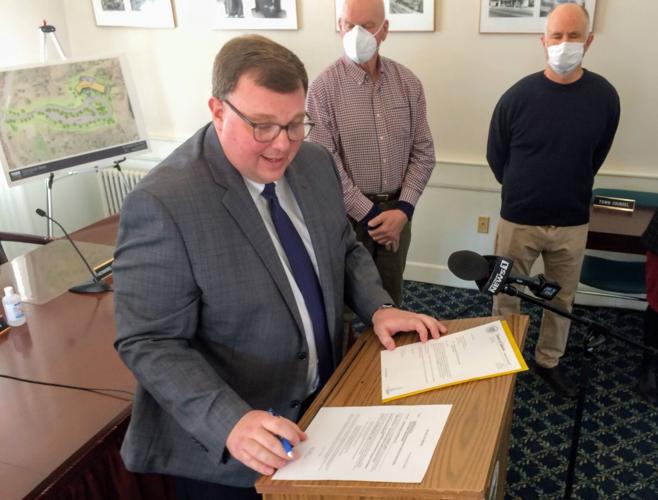 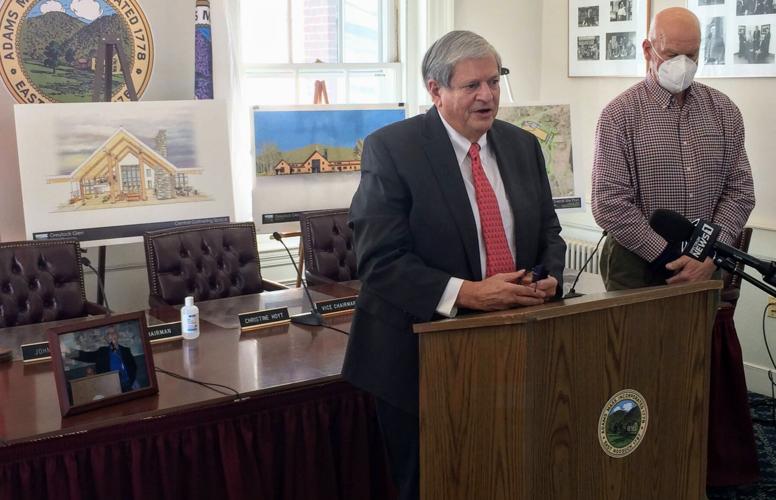 State Rep. John Barrett III, D-North Adams, said that full funding for the Greylock Glen outdoor recreation center will help Adams become a regional magnet. "You watch what will happen over the next several years because of this project. Be ready for it. The wave is going to come here."

ADAMS — A second major infusion of state funding clears the way for a long-awaited Greylock Glen outdoor recreation center to be built, starting this year.

The town announced Wednesday that it received $2.8 million from the state Executive Office of Energy and Environmental Affairs, on top of $6.5 million in funding delivered last summer.

And with just days to spare. The procurement process called for Adams to award a bid by Sunday — or start again.

"The town of Adams will be finally able to realize our dreams," said John Duval, chair of the Select Board. "The Outdoor Center is a go."

Officials gathered in Town Hall to announce the added funding and to speak about the project's importance to Adams and the wider Berkshires region.

"Today is a great day for us," said Joe Nowak, a Select Board member who helped guide the board's work on the Glen project. "It finally culminates what we have been working on for so, so long. ... We no longer have mills — we never will. But we have something that's God-made, Mount Greylock."

"You watch what will happen over the next several years because of this project. Be ready for it. The wave is going to come here," Barrett said.

Barrett joked that when he writes his book, the saga of development at the Glen, "it's going to be a real good chapter."

Green took a few moments in the public event to click a ballpoint pen and sign paperwork awarding the contract to Souliere & Zepka Construction Inc., of Adams. "This is finally going to happen. We're going to put a shovel in the ground and be able to do this," Green said.

Green stood before four large illustrations of the outdoor center. "What we see behind us will be built," he said.

The additional $2.8 million, Green said later, is enough to build out the full project. Bidders were asked last fall to put prices on certain parts of the project that might have to be delayed, including a retail area and a cafe. Both are now included in the project. The funding will also be enough to pave all driveways and parking areas, rather than use gravel.

Even when Gov. Charlie Baker visited the Glen site last summer, to officially announce the grant of $6.5 million, local officials acknowledged that construction costs anticipated before the pandemic hit may have risen enough to leave a gap.

"We had some nagging trepidation," Duval said. "All bids received confirmed our fears of rising construction costs."

The center’s cost estimate was completed in November 2019, four months before the pandemic began to create supply-chain problems and drive up prices for building materials, in some cases by 200 percent.

Pam Capeless, representing the general contractor, confirmed Green's estimate that work will begin this spring.  "It always has to do with the weather," Capeless said. Green said that the center is likely to open to the public in 2023.

Donna Cesan, the town's former director of community development, left that post before this moment came, but continues to work on the project, as she has for decades. Cesan said she's still not ready for retirement.

In the months ahead, she'll be part of shaping requests for proposals that will tap outside vendors to be responsible for elements of the recreation center, including a cafe, retail area and environmental education center.

"I'm going to stick around for a while. It's pretty exciting," Cesan said. "This is what I've waited for for years — the fun stuff. We're pretty jazzed."

State Sen. Adam Hinds, D-Pittsfield, joined the event by a video connection, from a celebration marking the completion of the new Wahconah Regional High School in Dalton.

Hinds said the state's funding for the Glen project means a great deal to the region, calling it a strategic investment in the Berkshires. "This is one of those projects," he said.

The project to build a lodge and recreational center at the Greylock Glen just got another boost from Town Meeting voters.

A proposal from a Berkshire County real estate developer, Lenox-based Shared Estates, has been accepted by the Select Board to build out the 23-acre campground planned for the Greylock Glen. It is the first private investment in the Glen plan.

The proposal to develop a camping center as part of the Greylock Glen project faces resistance from trail users and at least one local environmental group. Some see it as luxury camping out of step with the tract.