ADAMS — Four times a year, Catherine Foster has been getting a bill she didn’t think she should be paying.

Like hundreds of other property owners in Adams, Foster is billed by the Adams Fire District not only for water, but for other services it provides: fire protection and street lighting.

Foster sued in 2019, claiming that the district does not have the right to bill residents directly for those services.

Judge Michael K. Callan ruled that the civil lawsuit Foster and her attorney brought holds water. Pulling from facts agreed to by Foster and the district, Callan found that while an 1873 act of the Legislature gave the district the right to bill customers for water, that did not extend to other services.

Callan allowed Foster’s motion for summary judgment, a process by which a judge decides a case on the basis of law, when the parties agree on the facts. The decision found in favor of Foster’s claims, but it said further court action will be needed to decide “the scope and nature of the remedies.”

No date had been set for that proceeding.

Foster was represented by Springfield attorney Jeffrey Morneau. He could not be reached for comment. 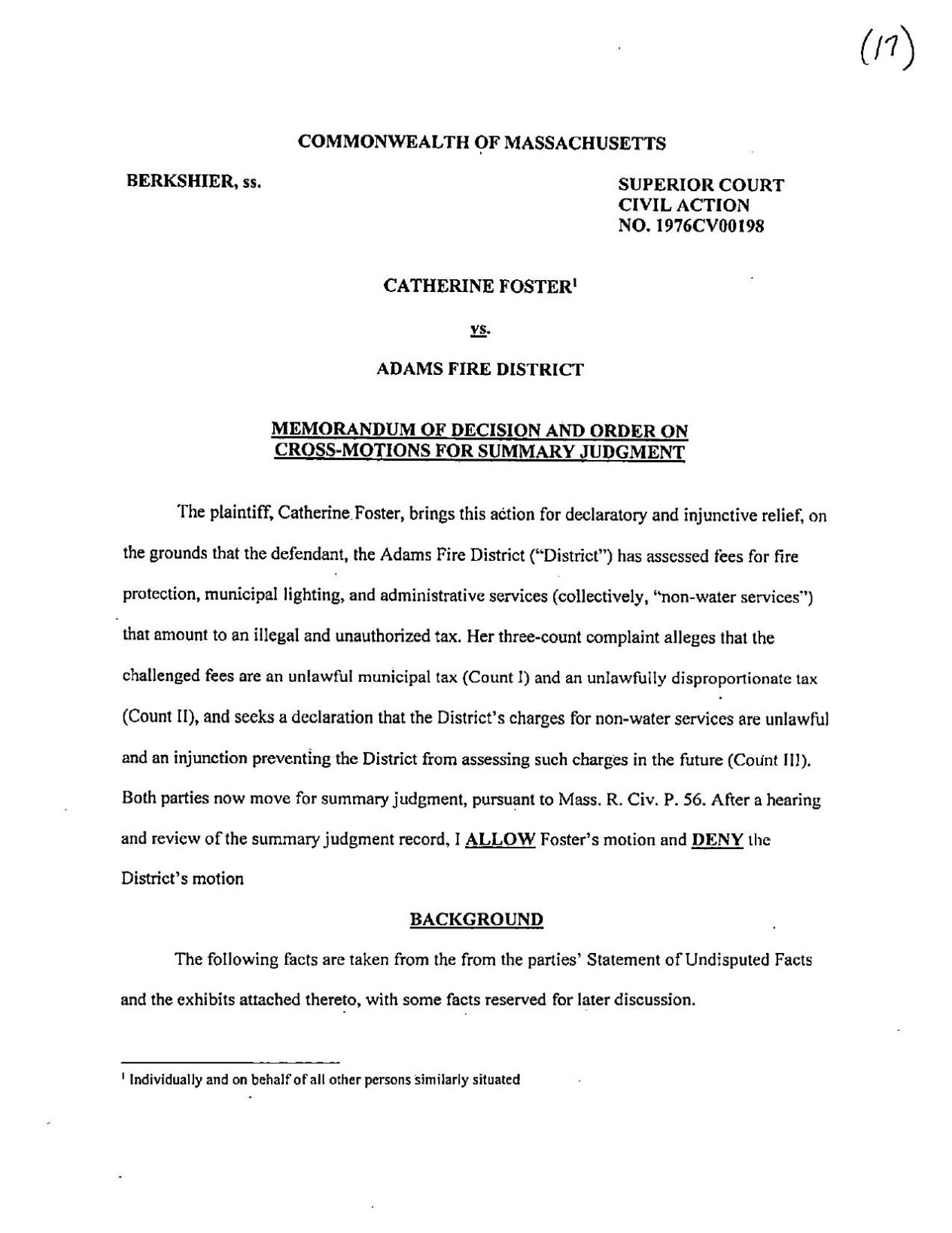 He said earlier that if Foster prevailed and the case was expanded as a class-action lawsuit, the district could be required to refund all such fees improperly collected — which, he said, could come to more than $1 million.

The district was represented by North Adams attorney Stephen Pagnotta. A message left with his office seeking comment was not returned.

The district told the court it had billed Foster $131.80 each quarter for a four-unit residential building she owns, with that sum covering fire protection ($80), street lighting ($31.80) and administrative fee ($20), all based on a schedule that applies to properties throughout the town.

Foster also has been getting quarterly bills for a single-family building she owns, albeit smaller. For those same services and fees, the district bill has come to $47.95.

Callan said that the issue, on summary judgment, came down to the issue of whether the district has the authority to bill residents directly for nonwater services. The 1873 state law allowed the district to do that for water, but not other services, Callan ruled.

Instead, the district should certify its costs for fire protection and street lighting to the town, which, in turn, should collect taxes from residents.