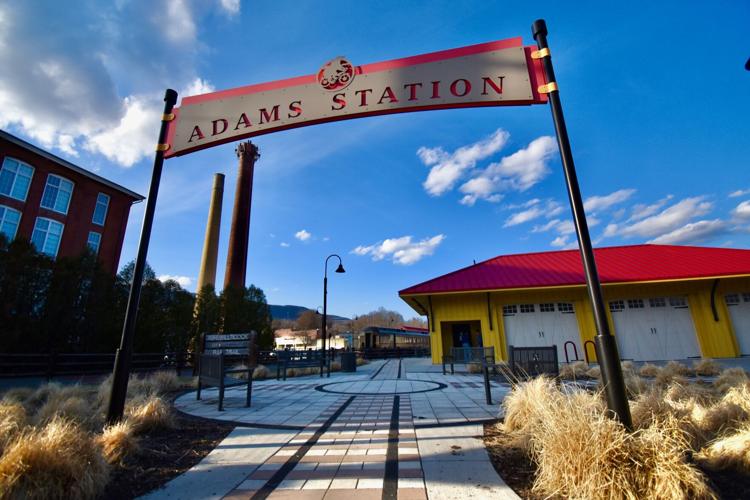 The Adams Station will soon have its interior installed starting this summer. Tuesday, April 5, 2022. 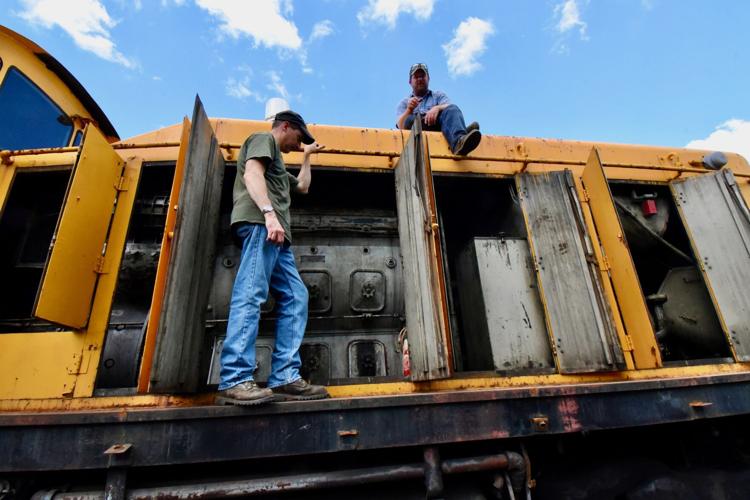 Tom Delasco, left, president of the Berkshire Scenic Railway Museum, and Brent Bette, vice president, talk about restoring the 1941 GM locomotive #1113 in 2020, which originally ran on the North Adams lines for the Boston & Main railroad. 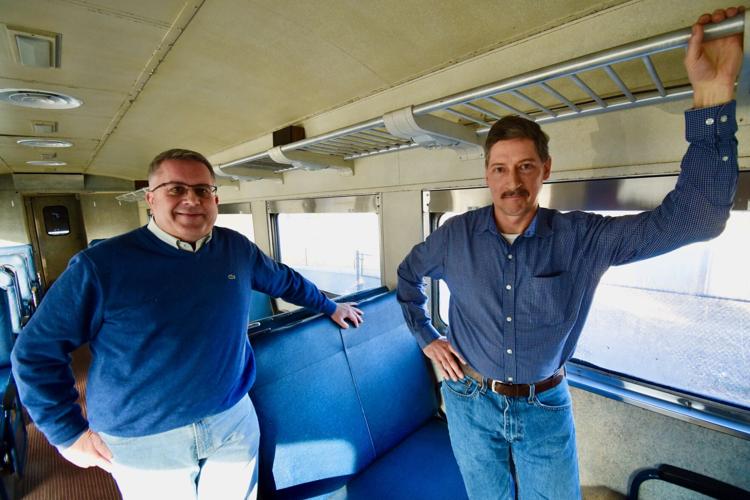 From left, Kevin Chittendon, treasurer and superintendent of train operations for the Berkshire Scenic Railway Museum, and Tom Delasco, president and chief mechanical officer, pose in one of the passenger cars in Adams. Tuesday, April 5, 2022. 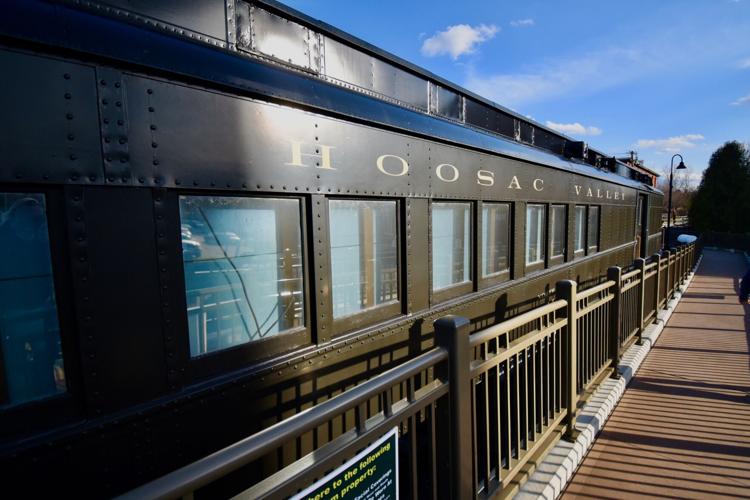 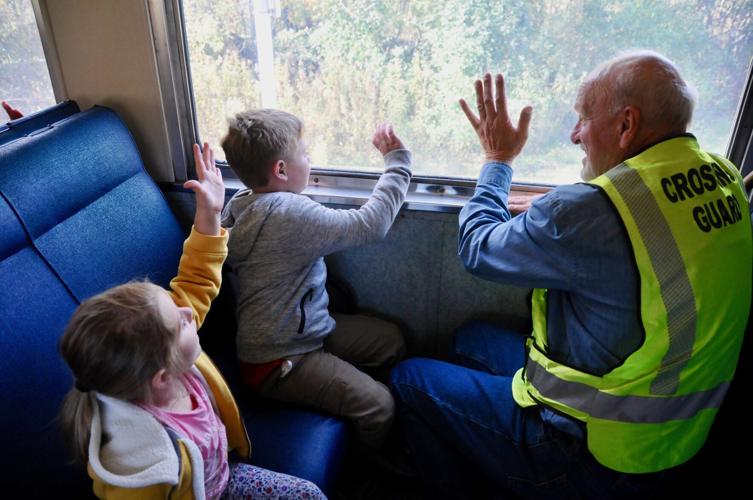 Crossing guard and Adams Select Board member Joe Nowak and first graders from Hoosac Valley Elementary School wave to motorists during a class trip on the Berkshire Scenic Railway in 2017. 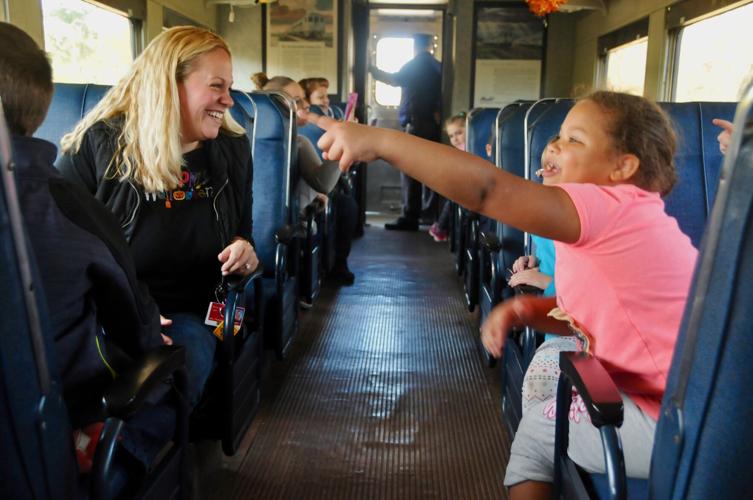 Hoosac Valley first grader Iyanah Russell, right, points out the sights to teacher Katie Chenail, left, during a ride on the Berkshire Scenic Railway in  2017.

For 38 years, thousands of people have paid money to take a ride on a train that goes nowhere, really, yet most love the experience.

The Berkshire Scenic Railway Museum launched its 2022 season with train rides from Adams to North Adams and back during Thunderfest on March 26 and 27. The debut of Bunny Hop Train Rides came last weekend, with three more runs this weekend. Then they’ll get back to their full schedule on Memorial Day weekend.

The Scenic Railway is looking forward to a more normal summer after rough going during the pandemic. When the pandemic hit in 2020, the rides halted until later that year, when they ran at half capacity and fully masked for a few weeks. The railway returned with a full season in 2021, and plans another this year.

“We were able to pay the bills, but that’s all we were able to do,” said Kevin Chittendon, the railway’s treasurer and superintendent of train operations. In 2021, they were back up to 8,564 riders.

Area communities are looking forward to the railway getting back to full trains and full schedules to enhance the local economy. Some of those who travel into the region to ride stay overnight, according to officials with Berkshire Scenic Railway.

“They play a huge role in bringing people to the area,” he said. “People like going back in time, and for the [Berkshire Scenic Railway volunteers], the passion is there, and they love the history of it, too.”

Berkshire Scenic Railway gets its ticket to ride

Adams Town Administrator Jay Green, who once served as president and on the board of Berkshire Scenic Railway, says the tourist trains bring several thousand people to Adams annually. “Last year, even in the midst of recovering from the pandemic with a limited operating schedule, BSRM’s ridership was nearly 9,000 riders.”

He said riders come from all over and, once here, look for places to eat out, as well as other attractions to visit.

“For some of those passengers, the train ride is their first introduction to the beauty of the Hoosac Valley and the rich history of Adams and North Adams,” Green said. “Many passengers return to explore the area further.”

“The trains are an important part of the portfolio of cultural attractions in the Northern Berkshire region and complement other venues in the region which keep guests — and their spending — here,” Green said.

The Berkshire Scenic Railway's "Bunny Hop Train Ride" will be offered both Saturday, April 9, and Sunday, April 10, with departures at noon, 1 p.m. and 2:30 p.m.

He said the original vision was to be able to board passengers in both Adams and North Adams. “If North Adams were to develop its end of the rail line ... the economic impact to both communities would be far greater.”

Jonathan Butler, president and CEO of 1Berkshire, said the railway offers a family friendly destination for locals and is a magnet for tourists, “drawing in thousands of train enthusiasts from around the northeast and beyond annually.”

The project, he said, “has kept our rail history alive for decades throughout Berkshire County.”

“The heritage railroad is really a unique experience because there’s something for everyone,” said Tom Delasco, president and chief mechanical officer. “That is the enjoyment we get out of it — sharing this with people who have never been on a train before.”

Riders come from near and far, and include a mix of ages, from grandparents to toddlers. Some of the older folks are reexperiencing a mode of travel they once used frequently. Then there are those who have never been on a train before, whose elders are excited to see their reaction to a taste of times gone by.

Founded in Lenox in 1984, the railway has a cadre of about 25 unpaid volunteers who have managed to acquire a variety of locomotives and passenger coaches, along with passenger train memorabilia and equipment. It presents museum displays in old railroad stations in Lenox, Stockbridge and Adams. There are no paid positions on this railroad.

The rides out of Adams use trains that date to the mid-1900s. The ride is pretty short, and winds up right back where it started in Adams, by design.

The volunteers do it all, from maintaining the grounds of the train stations to rebuilding locomotive engines and refurbishing the interiors of rail cars and coaches.

They also keep the books, make sure they meet state and federal mechanical and safety regulations for rail travel, dream up special event rides, analyze the ridership and set ticket prices.

During summer and fall, railway rides take passengers between Adams and North Adams twice a day every weekend. Special event rides take place during the Christmas season, the summer and foliage season.

The railway started out modestly in a donated former train station in Lenox, which still serves as a museum space and headquarters for the nonprofit. Later, the project picked up the station in Stockbridge, and was able to host train rides there for some time, until it was restricted by the rail line’s former owner, which is why they moved rides to Adams in 2014.

In 2015, with the help of state funding, the railway was able to acquire the rights to operate on a track in Adams that runs parallel to the Ashuwillticook Rail Trail. A few years later, the Massachusetts Department of Transportation added more track to allow the railway to extend the ride into North Adams.

Ticket prices are typically $18 for adults and $12 for kids, although some special event rides cost more.

Some tour bus companies book rides on the Berkshire Scenic Railway well in advance, Delasco said, bolstering their revenue and ridership. Riders come from all around New England, New York State and Pennsylvania.

“A lot of people come more than once,” Delasco said.

The most popular rides are during foliage season, Christmas rides with Santa, and nighttime cabaret rides, which include live music and allow riders to bring snacks, beer and wine.

“During foliage season and the Christmas season, everybody wants to go for a train ride,” Chittendon said.

Local officials say that among tourism options in the Berkshires, the railway has a unique appeal.

Pignatelli, the Lenox state representative, is working on legislation to allow the railway to add scenic rides in South County. Tourist trains were disallowed from those routes by the former owner of the line, but since then, the state has taken ownership and has the ability to reopen the scenic rail tour, Pignatelli said.

“I’m advocating for the state to allow them to use that rail line again,” he said. “I love what they’re doing in the northern Berkshires. They play a huge role in bringing people to the area, and appeal to locals as well.”

Pignatelli added that the railway helps to make the Berkshires into a “travel and tourist mecca.”