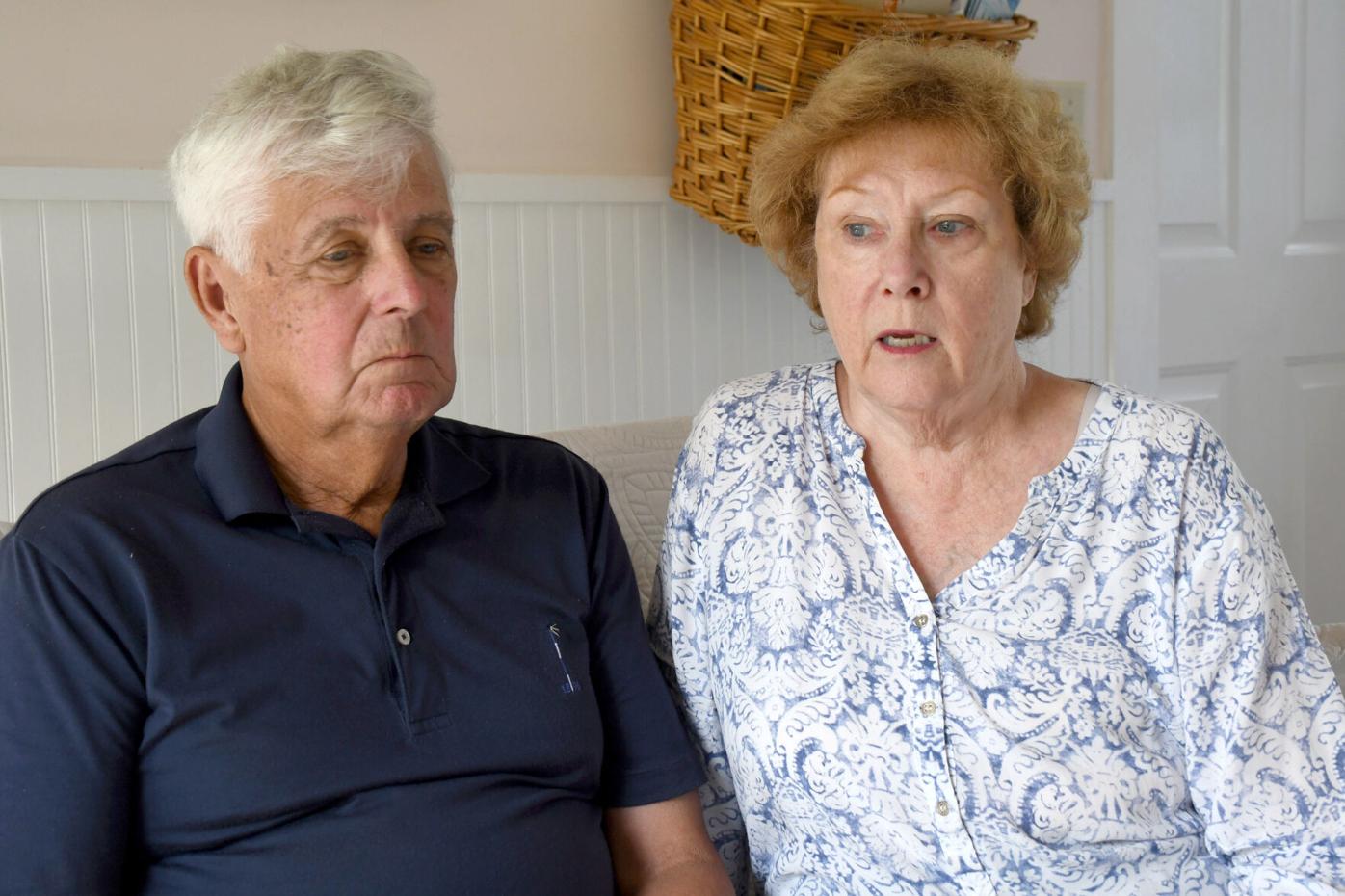 Clarksburg resident Larry Beach was at the Pentagon in Washington on Sept. 11, 2001, when hijacked American Airlines Flight 77 struck the building. His wife, Tricia, was home in northern Virginia. Five minutes after the Pentagon was struck, her sister in Florida called and asked, “Where’s Larry?” Tricia hadn’t yet known that the Pentagon had been hit. 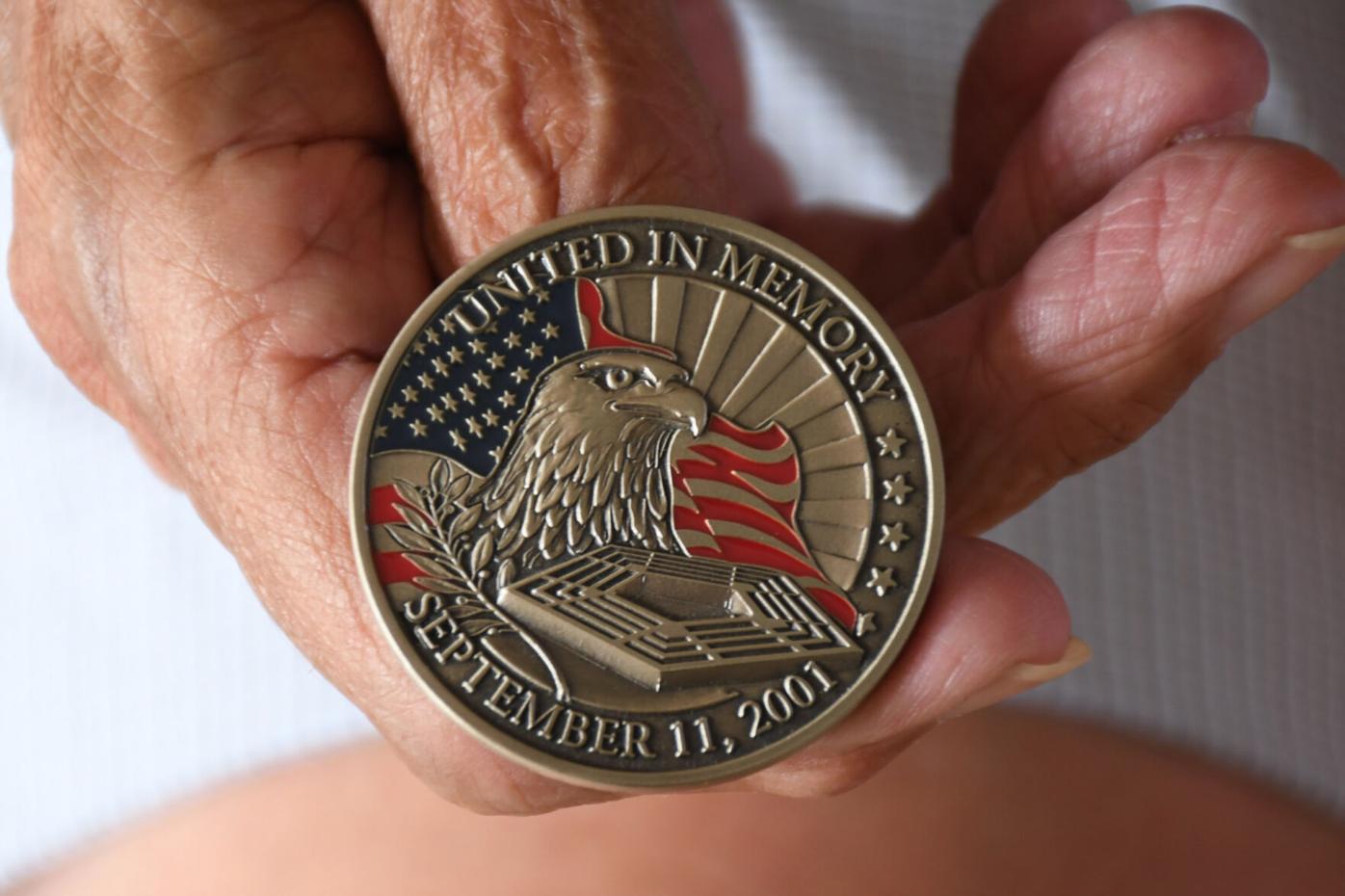 Beach holds a commemorative medal he received. Beach, who moved full time to Clarksburg in 2008, had begun working at the Pentagon in 2000, after a 25-year career with the Air Force. 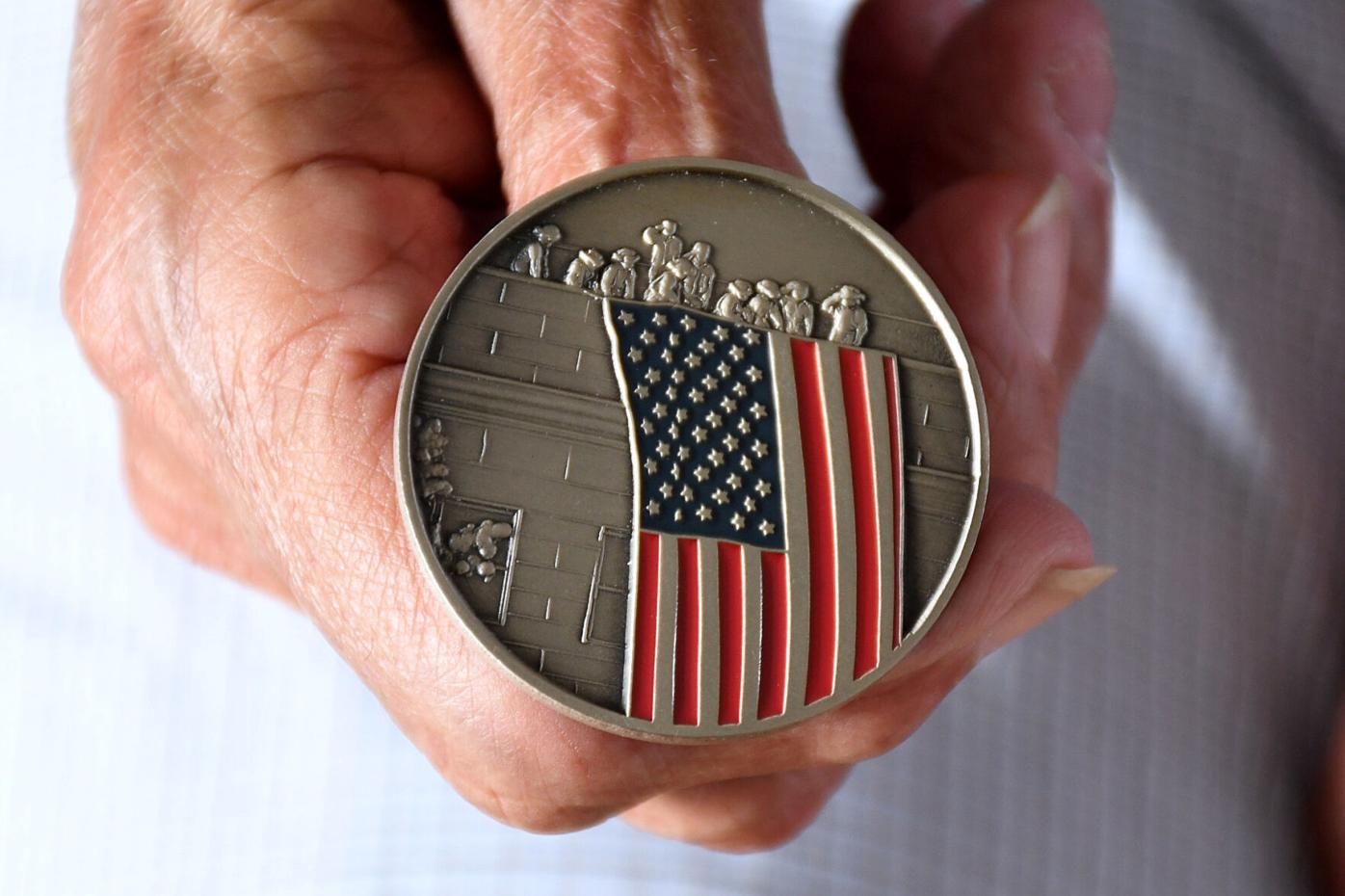 The other side of a commemorative medal that Beach received shows a flag draped on the Pentagon. He recalls that he was walking in the Pentagon’s inner courtyard when he heard “the unmistakable sound of engines throttling back.” 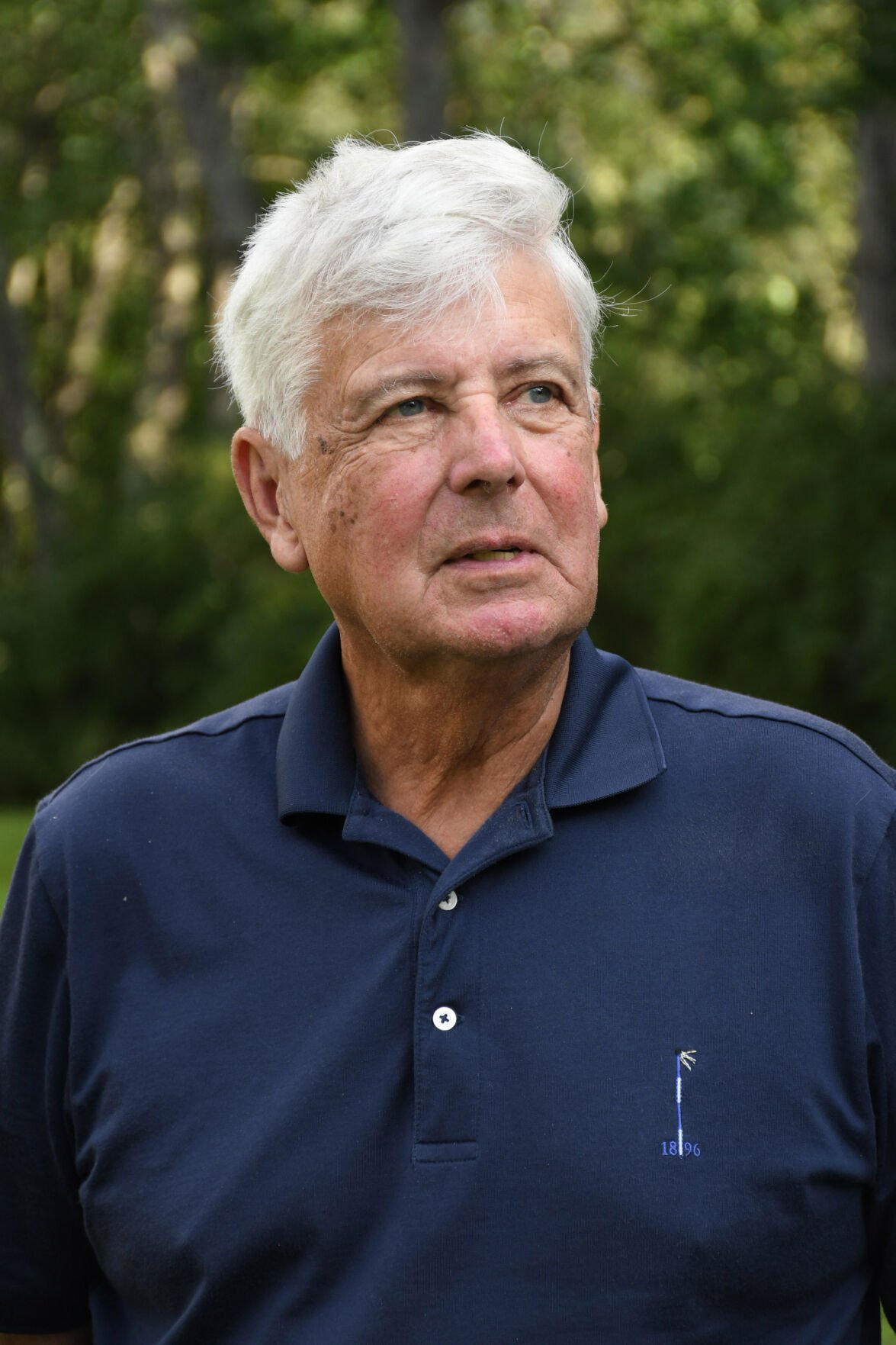 Two hours after the plane hit the Pentagon, Beach was in his car, rounding a corner in his neighborhood and blaring the horn. His wife heard the horn. She knew it was him.

CLARKSBURG — Twenty years after the coordinated terrorist attacks of Sept. 11, the defining image remains that of the collapse of the twin towers in New York City. But, Larry Beach has his own indelible image.

He was an employee at the Pentagon when hijacked American Airlines Flight 77 circled over Washington, then crashed into the iconic symbol of the U.S. military at 9:37 a.m.

He recalls that he was walking in the Pentagon’s inner courtyard when he heard “the unmistakable sound of engines throttling back.”

“I heard the impact, and then felt the impact,” he said, “and then I saw the fireball come above the Pentagon as I was standing there. Insulation from the plane started falling all around me, and I thought to myself, ‘Well, I think it’s time to leave.’”

Beach, who moved full time to Clarksburg in 2008, to the childhood home of his wife, Tricia, had begun working at the Pentagon in 2000, after a 25-year career with the Air Force.

Earlier that morning, it was Tricia who called and told him that a plane had crashed into one of the twin towers. Minutes after he hung up the phone with her, he was in a meeting and the television was tuned to live coverage from New York City.

“We watched as the second plane hit the tower,” Beach recalled. “I’m working with a bunch of Army guys. One of them was a Special Forces guy. This was the first time I heard someone say that it’s bin Laden, that it’s al-Qaida. I thought, ‘What? Who?’ I never heard the names before.”

He spoke with Tricia on the phone once again before returning to discussions among Pentagon officials.

“They were telling us about this bin Laden and how he hates financial institutions and the military, and everybody started speculating about what they would hit next, and I said, ‘Why not the Pentagon, if he hates the military?’”

Beach wasn’t seriously concerned that a strike was imminent. About 9:30 a.m., he began making his way to another meeting. He recalled with bitter irony that, as he walked in the courtyard, he passed the cafe that, at the time, was called Ground Zero. During the Cold War, the Pentagon was considered the first place that Soviet intercontinental ballistic missiles would strike.

Moments later, the commercial airliner struck the west side of the Pentagon, killing 184 people, including those aboard the plane.

“I started thinking about my wife, who has no idea where I am,” Beach said. He didn’t have a cellphone at the time, and those who did said that they were unable to get service. Beach said he feared that a second plane soon would strike the Pentagon.

Beach joined with everyone else in evacuating from the complex.

Meanwhile, Tricia was home in northern Virginia. Five minutes after the Pentagon was struck, her sister in Florida called and asked, “Where’s Larry?” Tricia hadn’t yet known that the Pentagon had been hit.

“I tried calling and calling,” she said. “I really didn’t know what to do.”

She still gets emotional talking about it. As the news spread about the Pentagon, friends kept calling her, but she couldn’t talk. She wanted to keep the phone line open in case Larry were to call. Then a friend from Williamstown phoned and told her she thought she saw Larry in news footage of Pentagon evacuees. That brought some comfort, but not enough.

So thrilled to see his car

The Beaches, who had moved to northern Virginia to be closer to their two daughters, lived in a townhouse at the time. Tricia recalled that she spent the two hours after the attack going out onto the deck to see if she could spot Larry's car coming around the corner.

Meanwhile, in the rush of evacuation, Larry had made his way to the Metro’s Pentagon station, where the scene was eerie. Hundreds of people were assembled at the platform when a train pulled into the station with none of its lights on.

“It was like something out of a Stephen King novel,” Beach recalled.

When the train doors opened, the lights turned on and everyone piled in. The train wound up dropping him off at the Metro station in northern Virginia where his car was parked. He still hadn’t reached his wife by phone. Every pay phone he saw had a long line, and he figured his time would be better spent if he kept making his way home.

Two hours after the plane hit, Beach was in his car, rounding a corner in his neighborhood and blaring the horn.

Tricia heard the horn. She knew it was him.

“I nearly jumped off the second-story balcony, I was so thrilled to see his car,” she said.

By the time he pulled into their driveway, she was there waiting for him.

“He hadn’t even shut the car off yet, and he had his sports car, and I jumped on his lap,” she said. “We were kind of stuck in the car together.”

A split decision to have breakfast with his family saved this Great Barrington man's life on Sept. 11