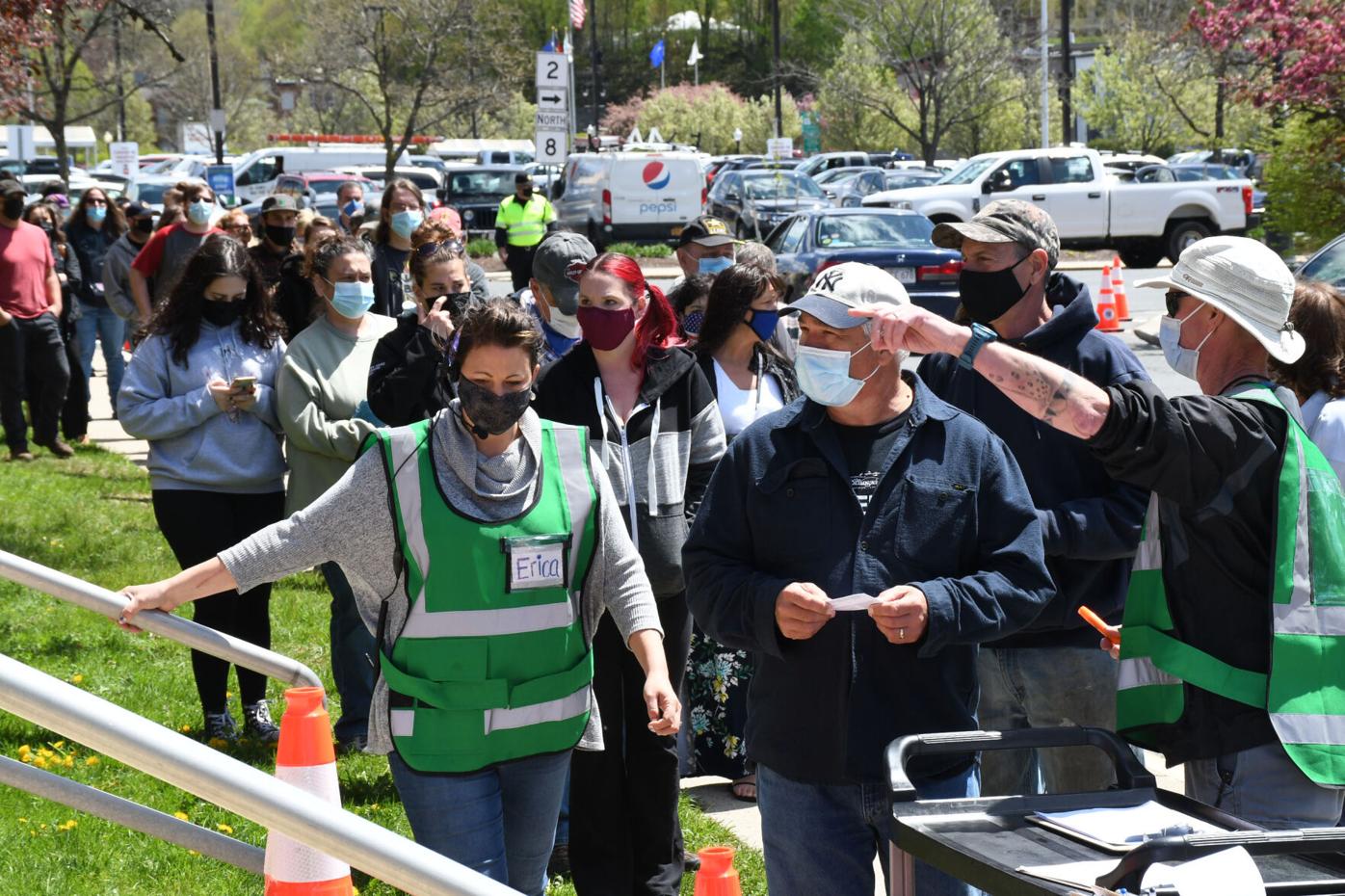 After five months of immunization efforts, some 61 percent of county residents have received at least one dose of the vaccine, and the results are playing out in case, hospitalization and death data. 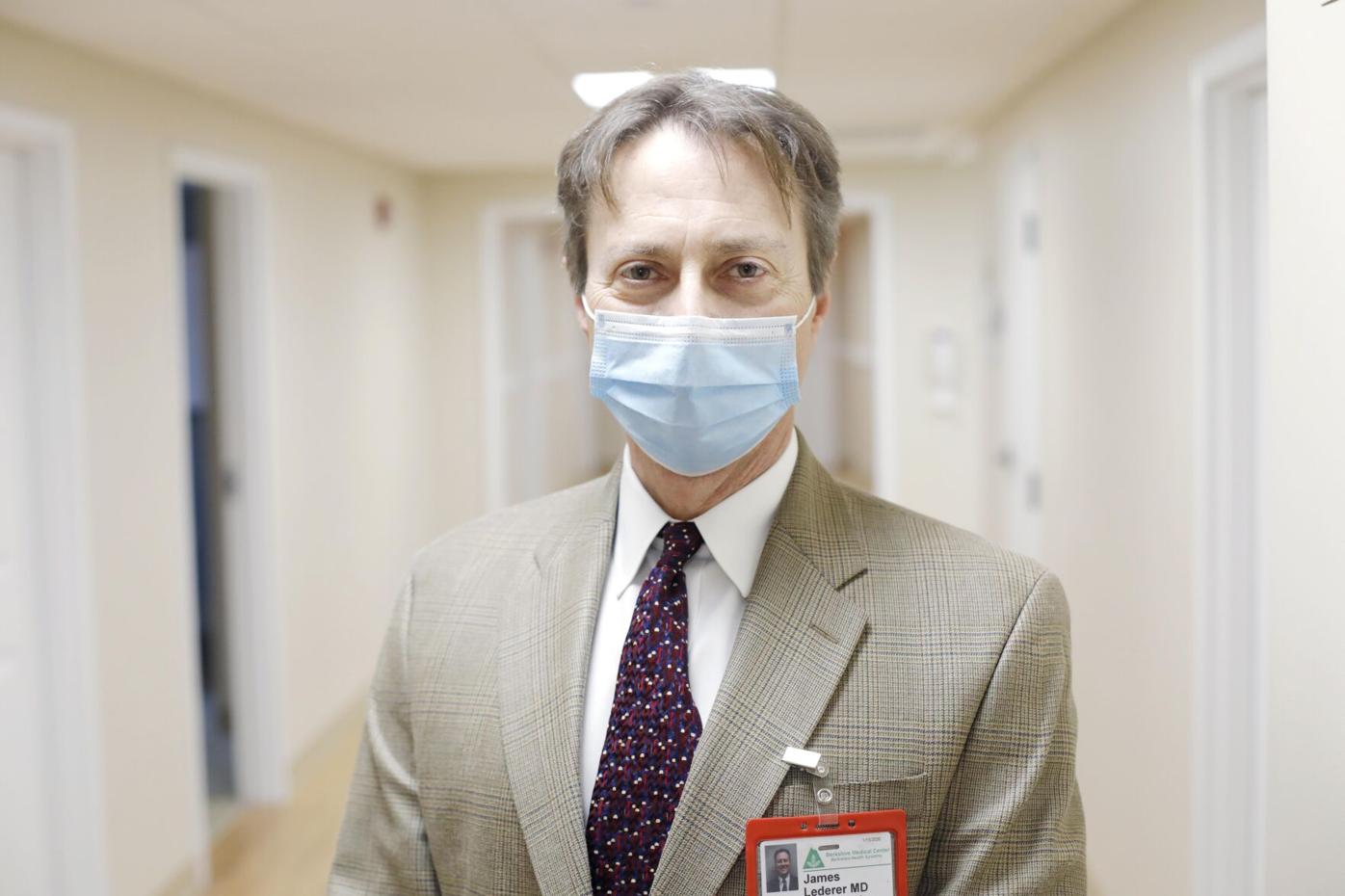 Dr. James Lederer, chief medical officer and chief quality officer at Berkshire Health Systems, said that while COVID-19 cases are surging across the country, for now "Berkshire County remains among the areas of low to moderate positivity." 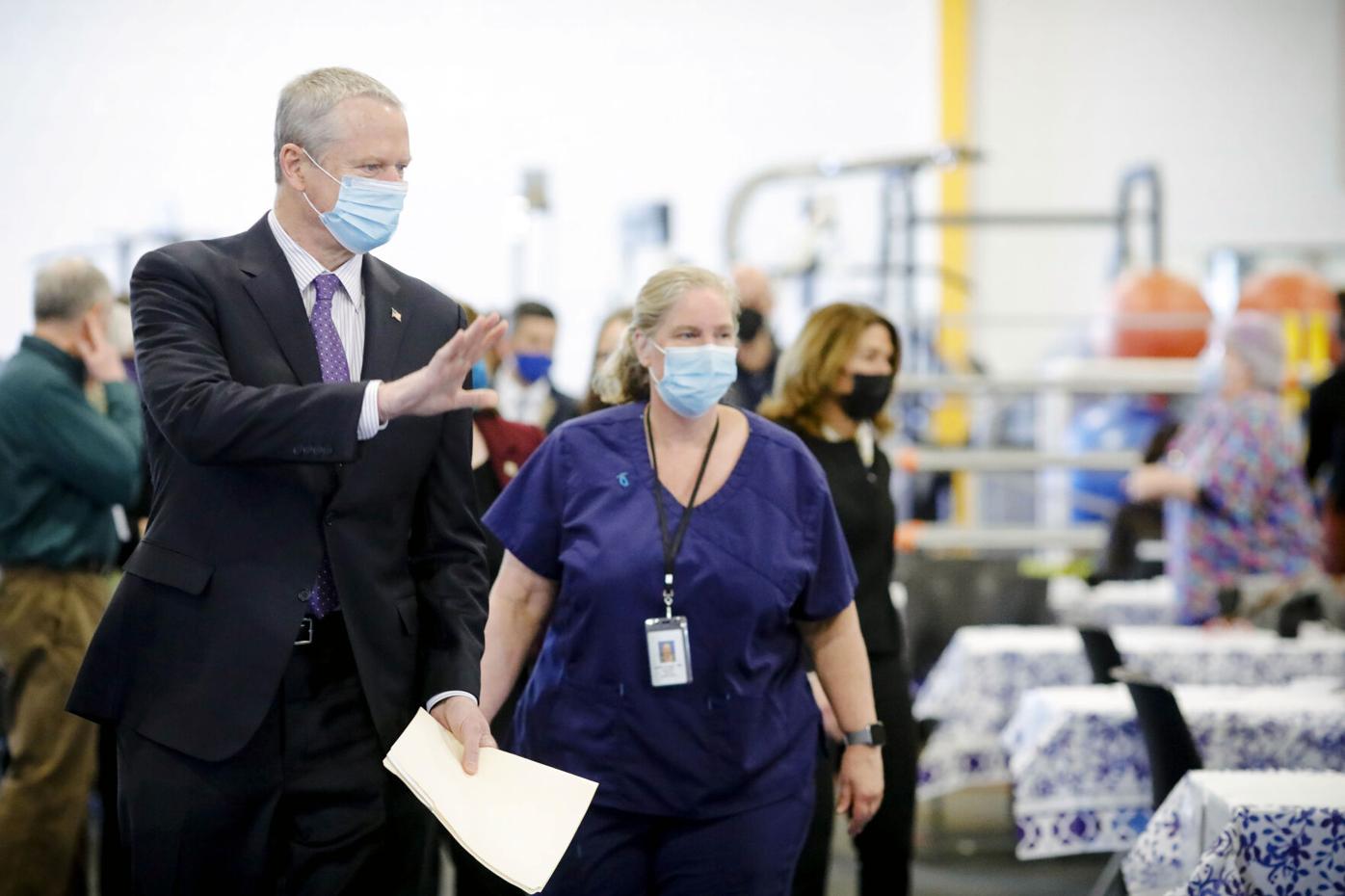 Gov. Charlie Baker tours the COVID-19 vaccination center at Berkshire Community College in Pittsfield on Thursday with Leslie Drager, the lead public health nurse with the Berkshire Public Health Alliance. “Our cases are dropping,” Drager said recently about COVID-19 numbers in the Berkshires. “I think it’s a combination of people being vaccinated and the warmer weather.”

After five months of immunization efforts, some 61 percent of county residents have received at least one dose of the vaccine, and the results are playing out in case, hospitalization and death data.

Dr. James Lederer, chief medical officer and chief quality officer at Berkshire Health Systems, said that while COVID-19 cases are surging across the country, for now "Berkshire County remains among the areas of low to moderate positivity."

Gov. Charlie Baker tours the COVID-19 vaccination center at Berkshire Community College in Pittsfield on Thursday with Leslie Drager, the lead public health nurse with the Berkshire Public Health Alliance. “Our cases are dropping,” Drager said recently about COVID-19 numbers in the Berkshires. “I think it’s a combination of people being vaccinated and the warmer weather.”

During one of the worst weeks of the pandemic in Berkshire County last winter, at least four people died each day.

Over the last six weeks, the virus killed four people in total.

Meanwhile, the county’s seven-day rolling average of new cases has fallen more than 90 percent since its January peak, hospitalizations are down to pre-winter surge levels, and the Berkshire Medical Center intensive care unit has been empty of COVID-19 positive patients for weeks, according to James Lederer, chief medical officer at Berkshire Health Systems.

The takeaway? Vaccines are working.

“The real telling mark is that we’ve had significant numbers of people vaccinated,” he told The Eagle on Friday. As of Tuesday, 61 percent of all county residents had received at least one dose of the vaccine, and the older population is even more protected. Nearly 80 percent of people 60 and older in Berkshire County have been fully vaccinated, according to Lederer, and state data show that 86 percent have received at least one shot.

“When we look at the people who have been admitted these last six to eight weeks, they are, for the most part, in the below 60 range,” Lederer said. “That speaks to just how impactful vaccination is in preventing illness and death.”

From surge to summerCOVID-19 vaccinations began in the county on Dec. 17 at Berkshire Medical Center, followed by clinics at long-term care facilities that kicked off in the final days of last year. Just over a month after the rollout began, vaccines had reached 7 percent of the county’s population, according to state data.

At the same time, however, the county was in the grip of its worst COVID-19 wave.

In early January, just as second doses began to go into the arms of health care workers, COVID-19 hospitalizations in the region surged to their highest point in the pandemic, with more than 60 positive patients at the hospital and nearly a dozen in intensive care, according to Lederer.

Over the course of January, 78 people would die — up from 75 the previous month — some at the hospital, others at long-term care facilities the saw outbreaks in the waning weeks before vaccines arrived. During the worst weeks, at least two people were dying each day.

In total, more than half of the county’s pandemic fatalities took place between Dec. 1 and Jan. 31.

After mid-January, however, cases, hospitalizations and deaths began to fall, and then plummeted. The county saw a brief spike in late March and early April, which experts attributed, at least in part, to increased gatherings. Once the wave subsided, however, the Berkshires went from April 15 to May 4 without a single reported COVID-19 death – the longest such stretch since November.

Those numbers have shifted as two critical pieces of the pandemic puzzle are coming together: vaccine rates and temperatures are both increasing.

Lederer pointed out that weather has likely played a role in the county’s recovery. Last summer, case counts fell as people moved more of their interactions outdoors.

“Our cases are dropping,” said Drager. “I think it’s a combination of people being vaccinated and the warmer weather.”

In recent weeks, experts have called for improved ventilation to stop airborne spread, particularly in workplaces. Earlier this month, the Centers for Disease Control and Prevention emphasized in public guidance that the virus can spread indoors even when people are separated by more than 6 feet, an acknowledgement that experts called belated.

But the weather alone would not account for the change in the demographics of who is catching the virus and getting hospitalized, local health experts say, which means the vaccines have clearly made a dent.

In her contact tracing, Drager says she has found younger people, including children, have begun to make up more of her workload. In the hospital, Lederer says, doctors have seen fewer elderly COVID-19 patients, which also means fewer patients with heart failure, COPD and other risk factors.

“It’s a younger patient demographic, with fewer of those medical conditions involved,” he said. “So they have a quicker response to therapy, quicker discharge, less need for the intensive care unit.”

Neighboring states, including Connecticut and Rhode Island, have also seen steep declines in COVID-19 cases as vaccination rates have climbed.

That progress comes with caveats. A large portion of Berkshire County — some 40 percent of residents — remains unvaccinated, as leaders work to overcome hesitancy. And despite vast improvements since the winter, case counts, hospitalizations and deaths have not yet hit the lows of last summer.

Vaccinations have also slowed, as local demand has shrunk. In early April, Berkshire County was increasing its rate of people vaccinated with at least one dose by 4 to 5 percent each week. That rate fell to 3 percent by May and hit just 2 percent last week, even with several thousand children newly eligible for the Pfizer vaccine.

Children younger than 12 also remain at risk, with emergency use authorization for vaccines in that age group not expected until the end of this year or early next year, according to Lederer.

Meanwhile, local health leaders have seen a small — and expected — number of “breakthrough cases,” or COVID-19 cases in people who are fully vaccinated. While a growing body of evidence shows that vaccines are extremely effective in real world conditions, the CDC has warned that the public should expect some of these cases, as “no vaccine prevents illness 100 percent of the time.”

In early real world studies, vaccines appear to decrease the chance of a serious infection in people who do catch COVID-19 after getting both shots, and evidence shows vaccinated people are less likely to transmit the virus than the unvaccinated, though people who are immunocompromised may receive less protection from the vaccines in general and remain at higher risk.

With the county’s progress, local health leaders remain optimistic about the summer but somewhat wary of the state’s May 29 rollback of all COVID-19 regulations.

“It’s not too soon, necessarily,” Lederer said. “But too fast? With all the components we’re dropping? Maybe.”

Lederer pointed out that advising vaccinated people to go maskless and the unvaccinated to wear face coverings means relying on a trust system.

“The governor says, ‘Get back to normal,’ and we’ll know within a few weeks thereafter what the impact of getting back to normal is,” Lederer said.

He recommended that residents continue to avoid crowds when they can and stressed that everyone should feel comfortable continuing to wear masks if they want to.

“And, if you do have significant medical illness, particularly a respiratory disease, and you want to wear a mask, I’d encourage that,” he said. “I think we’ve proven that masking decreases not just COVID cases but many of our transmissible respiratory viruses, and the illnesses associated with them.”

Health leaders said they expect to model their own behavior — for example, whether they will continue to wear masks in the grocery store once allowed to go maskless — on how prevalent the virus appears to be in the community.

With 40 percent of the county still unvaccinated, Drager said she expects to keep wearing a mask in some crowded, indoor spaces — at least for a little while.

Federal leaders have also urged caution about the upcoming months of the pandemic. While variants circulating in the U.S. appear to be managed well by the vaccines, virus spread in other countries — including the crisis in India — raises the specter of potential new variants.

“I think we would be remiss to say we are out of the woods,” CDC Director Rochelle Walensky told Congress on Wednesday. “This pandemic, this virus has sent us too many curveballs.”