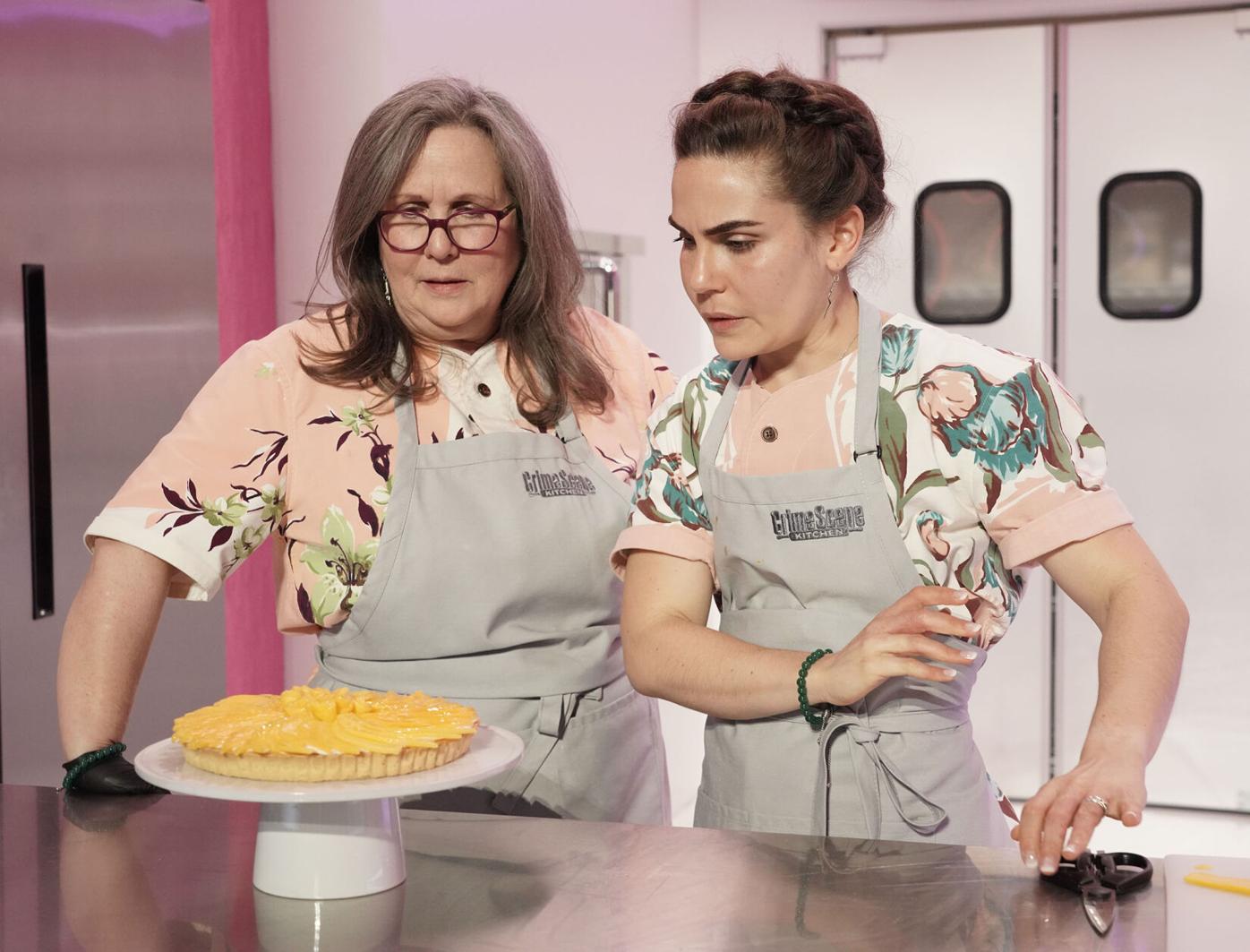 Contestants Leslie Milton, left, of Williamstown and her daughter, Emma Rosenthal, in the “Decisions, Decisions” episode of “Crime Scene Kitchen,” which aired June 16. 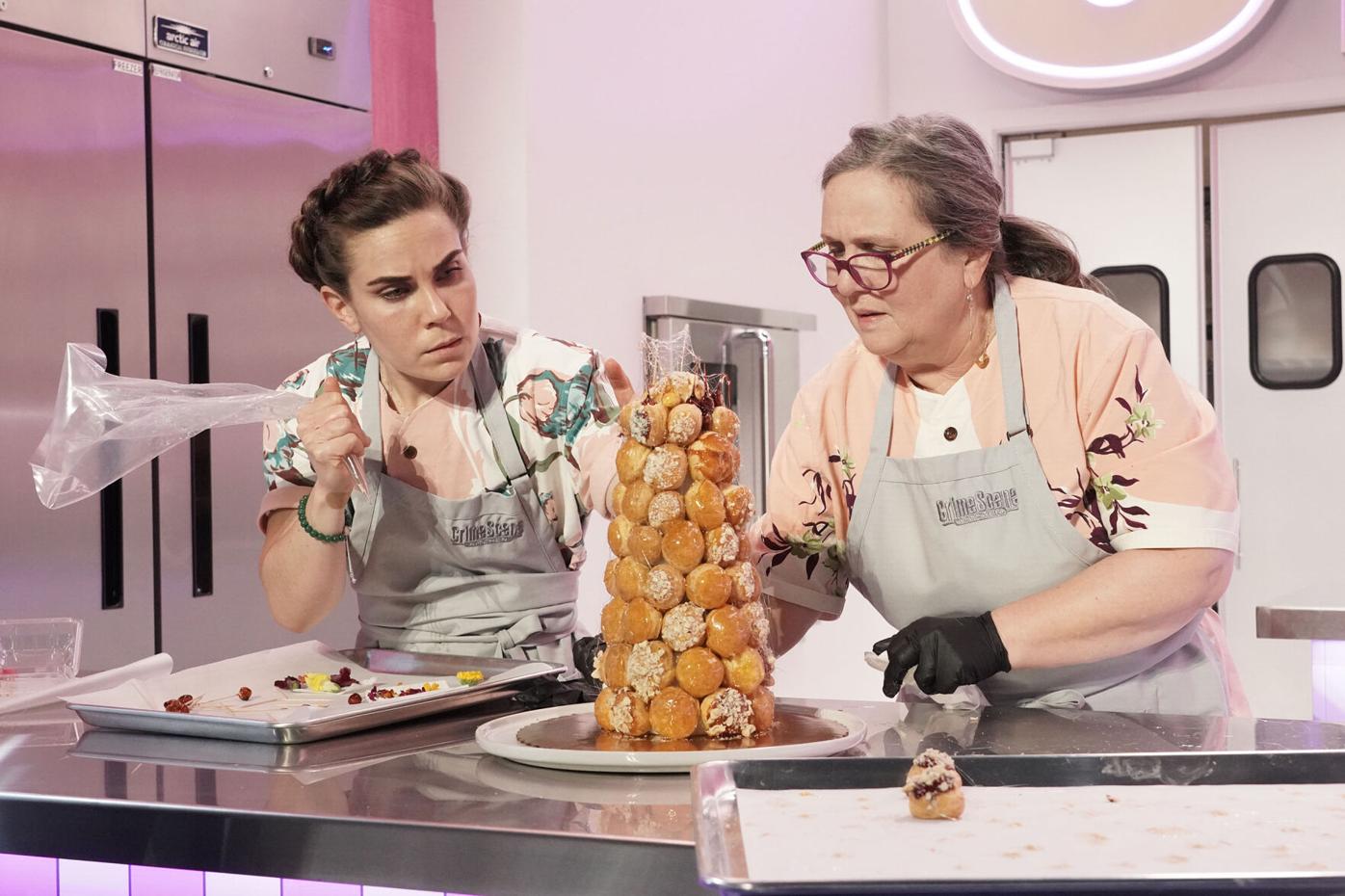 Contestants Leslie Milton, right, of Williamstown and her daughter, Emma Rosenthal, in the “Decisions, Decisions” episode of “Crime Scene Kitchen,” which aired on July 12.

Contestants Leslie Milton, left, of Williamstown and her daughter, Emma Rosenthal, in the “Decisions, Decisions” episode of “Crime Scene Kitchen,” which aired June 16.

Contestants Leslie Milton, right, of Williamstown and her daughter, Emma Rosenthal, in the “Decisions, Decisions” episode of “Crime Scene Kitchen,” which aired on July 12.

WILLIAMSTOWN — How close of a connection do Leslie Milton and her daughter, Emma Rosenthal, have with each other?

Well, put it this way: With cool heads, no fuss and some muss, they were able to sift through scant clues of a test kitchen, poking through the trash, dirty sink, dishwasher, refrigerator and cupboards. Duly noting the culinary evidence before them — chocolate birch bark, a laser thermometer, oil, buttermilk, piping bags of meringue and pictures of mushrooms — mother and daughter agreed that a black forest cake had been baked there, a cake that was now gone.

Tasked then to recreate it, they soon presented celebrity judges with a gorgeous — and apparently delicious — concoction, decorative meringue mushrooms and all.

“That really was an amazing execution,” said the Michelin-starred chef Curtis Stone, with cameras rolling. Fellow judge Yolanda Gampp, “the Beyoncé of Cakes,” nodded in agreement.

In their debut on the nationally televised show “Crime Scene Kitchen” on June 2, Milton, who lives in Williamstown, and Rosenthal, who lives in Chicago, advanced to the next round. They have since advanced again and again, and now this Wednesday at 9 p.m., they will be one of five teams remaining from the original 12.

This is the premiere season of the show, billed as equal parts guessing game, culinary competition and comedy. Hosted by comedian Joel McHale, “Crime Scene Kitchen” runs through July 21 on FOX.

“How many people get to do a primetime network reality show?” said Milton, in a recent interview with The Eagle. “It was great.”

Was great, she said. Past tense. The show was prerecorded this spring in Los Angeles. Contractually, Milton can’t say if she and her daughter won the competition. The winners receive $100,000.

How did their inclusion in the competition come to pass?

Emma, an actress, came across a casting notice calling for bakers and pastry chefs who like to solve puzzles.

Milton, 63, had only begun baking in earnest about 14 years ago when Emma went off to college at Northwestern University. Each week, she would send her daughter care packages filled with homemade cookies.

“It made her very popular,” Milton said.

Milton herself had been a recipient of similar care packages from her grandmother beginning when Milton attended summer camp as a child. The homemade sweets continued to arrive in the mail through her college years, first at Illinois Institute of Technology, then at the Rhode Island School of Design.

Milton refers to that time period as “Life B.P” (before pastry) — that is, before she completely committed herself to the world of butter, sugar and chocolate.

A native of New Jersey, she had careers in graphic design, advertising and public relations before becoming a stay-at-home mother for Emma, her only child. Once Emma was off to school, Milton returned to the salaried life, working as a fund-raiser for a New York City museum. But that didn’t last long.

Six years ago, at the age of 57, she quit her job to formally study baking.

“Baking and fine pastry are really the intersection of art and chemistry,” she said. “I just felt drawn to it.”

She graduated with honors in 2015 from L’Art de la Patisserie program at Chicago’s French Pastry School. She then took apprenticeships in Boston, Paris and Vermont.

After two years living as what she calls a “pastry nomad,” Milton settled in Williamstown five years ago, having had a second home in the Berkshires dating back to the 1980s. She now runs a baking company, GoodNight Kitchen, from her loft apartment at Cable Mills.

As for her teammate, her daughter, Rosenthal, she’s a self-taught baker, “very accomplished in her own right,” her mother said.

The casting call for “Crime Scene Kitchen” went out in February. Rosenthal, 33, applied. In late February or early March, the casting company invited the two to take part in a Zoom call. That was followed by more Zoom calls. In late March they were notified that the show’s producers had chosen them. On April 2, they left for Los Angeles.

“We are adventurous types,” said Milton, “and this sounded like the best adventure ever.”

The producers purposefully told them very little about the show, other than that it would be an elimination competition over a span of between two to five weeks, depending how far the competitors advanced.

The upcoming episode, on Wednesday, marks the semi-finals.

“It’s a fun episode, said Milton. “The guest judge is Ken Jeong. He’s hysterical. … I can’t tell you any more than that.”

What she can say is that she and her daughter are pretty good at this — at entering “the scene of the crime,” a kitchen that had just been used to make an elaborate and delicious dessert that has since disappeared, and then figuring out what was baked. Under strict time constraints, the teams must duplicate the recipe based on the clues they’ve gathered.

“We have an incredibly strong relationship to begin with,” Milton said of she and her daughter, “but we ended up being very good in the kitchen together. Emma has a great memory. She was invaluable for remembering the clues. Honestly, it was magical to have this experience with her.”

What was the most difficult challenge in the competition to date (that is, through last Wednesday’s episode)? In one of the episodes the two made a mango tart when the clues had called for a mango cheesecake. Close enough. None of the other teams got it correctly, either.

Or maybe it was the croquembouche — a creampuff tower held together with cooked caramel.

“We had to make it in three hours, which is almost impossible,” Milton said. “Normally, you might make it over three days.”