The yellow line on this map marks the prospective route that will be examined by the state Department of Transportation in its Northern Tier Passenger Rail Study. The effort kicks off this week and will analyze the viability of restoring service linking North Adams with Boston. 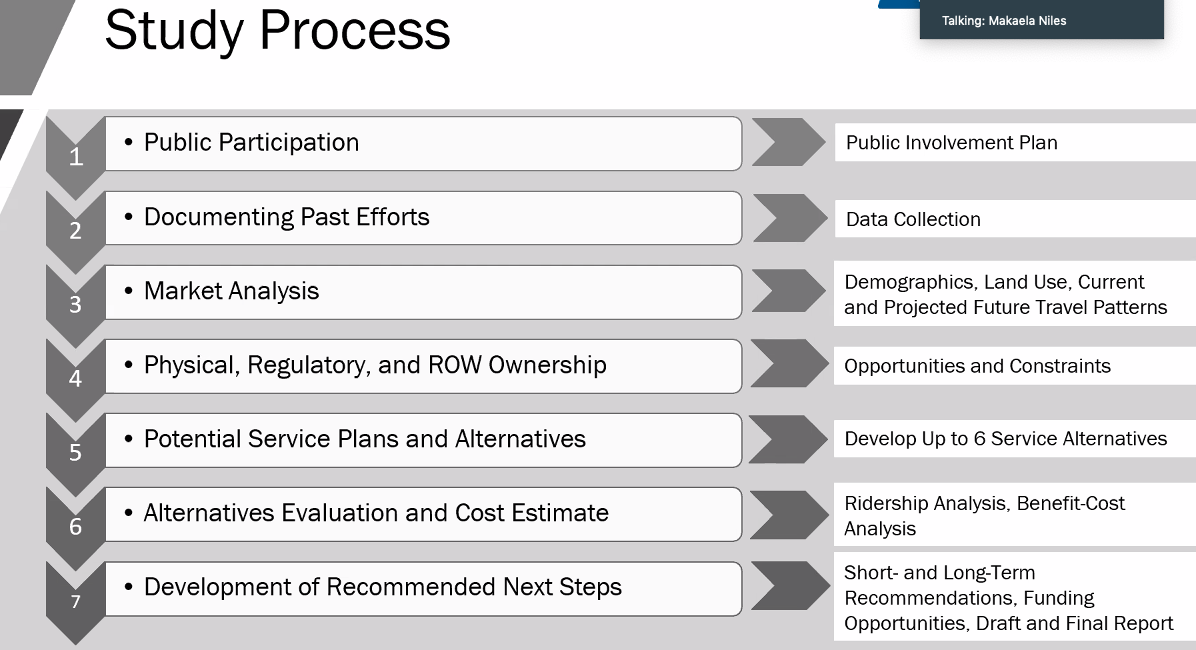 These are the steps that a state Department of Transportation team will follow over the course of 18 months to evaluate the feasibility of passenger rail service on the "northern tier," from North Adams to Boston.

It’s “all aboard” time for the second large-scale study of passenger rail in Massachusetts.

When people pile onto a video call Thursday hosted by the state Department of Transportation, they can expect to hear words like “ridership,” “climate,” “equity” and “commuters.”

They won’t hear “already paid for.”

Over the next 18 months, the DOT, as instructed by a 2019 law, will gauge the feasibility of restoring travel by rail between North Adams and Boston. The DOT’s Northern Tier Passenger Rail Study comes on the heels of a study of east-west passenger rail across the state’s midsection, including Pittsfield, which wrapped up last year and is now a candidate for infrastructure funding.

U.S. Rep. Richard E. Neal, D-Springfield, has said several times this month that creating regular east-west passenger rail service through his home city is one of his priorities for use of federal money.

One of the lead proponents of the northern route, state Sen. Jo Comerford, D-Northampton, believes both merit action.

Comerford said in an interview Tuesday she believes that people in western Massachusetts have a right to multiple passenger rail choices — and that the east-west route through Springfield, if built out, isn’t adequate.

“All of these are important, period,” she said of proposed or existing rail lines. “The recovery money is supposed to be spent for years and spark an equitable recovery into the future from the pandemic.”

On the Northern Tier, service already reaches as far west as Fitchburg. Tracks are in place and freight running, she said. “We’re talking about passenger rail on a railway line that would certainly need improvements, but would not need all-new construction.”

“We have a right to want to be connected by rail. That will take different proposals (working) together,” Comerford said. “We shouldn’t be forced as a region to choose only some of them. It is a potential for a sea change moment.”

To register for Thursday’s session, visit the DOT’s project website.

During a July meeting that outlined the new Northern Tier study, the DOT said the project will consider what it would take to create passenger rail service able to compete with other forms of transportation. The study’s project manager is Makaela Niles.

Until 1958, people could ride from North Adams to Boston by train, on tracks that remain along Route 2 — or a tunnel deep within the Hoosac Range. Service from Greenfield to Boston was dropped in 1960.

As with the earlier study of east-west rail through Springfield, challenges can be expected to include track condition, track ownership, rights-of-way conflicts and questions about costs and whether enough people would use the service.

Part of the existing track is controlled by Pan Am Railways and used to move freight.

The DOT says this week’s 90-minute meeting will go over the duties of a working group and sketch the study’s goals.

Comerford and state Rep. Natalie M. Blais, D-Sunderland, backed legislation that compelled the DOT to run the inquiry. At the July session, Comerford said it falls to lawmakers to keep pressure on and to overcome hurdles. “We do want to run this almost like a campaign,” she said at the time.

In a statement this week, Comerford said the project is about more than “a transportation solution.”

“It’s a matter of regional equity. It’s a climate change necessity. It’s an economic development win for western Massachusetts,” she said. “And it can help solve Boston’s traffic congestion problem and housing shortage — all at the same time.”

The DOT’s final report will include six possible approaches to rail service. During the study, the agency says it will hold at least three public meetings, along with sessions of the working group, all of them open to the public.