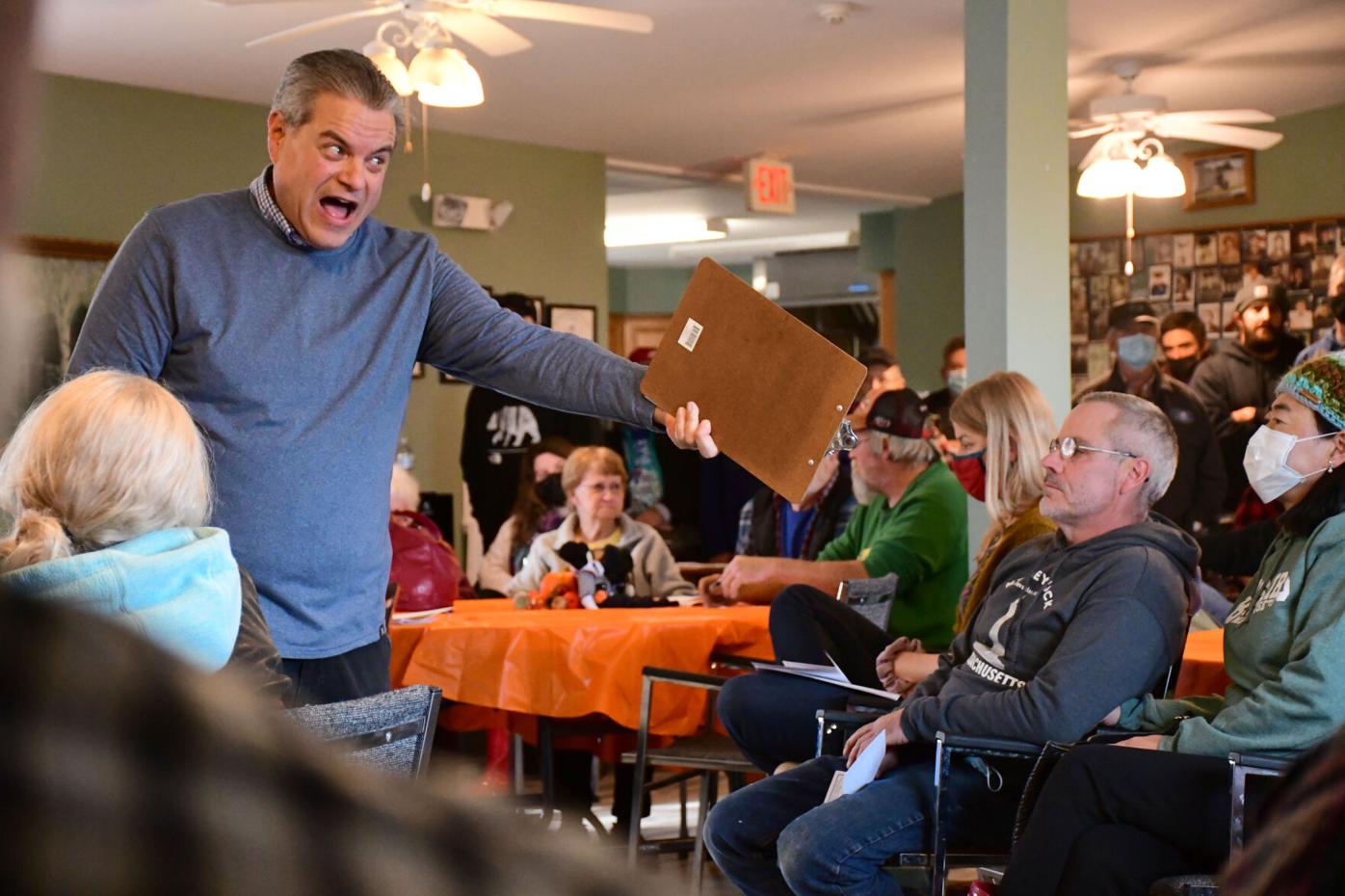 Auctioneer Tom Weitbrecht, of Strategic Auction Alliance, conducts a sale Wednesday with a standing-room-only crowd at the Florida Senior Center. Sitting at right are Wayne Gelinas and Lea King. 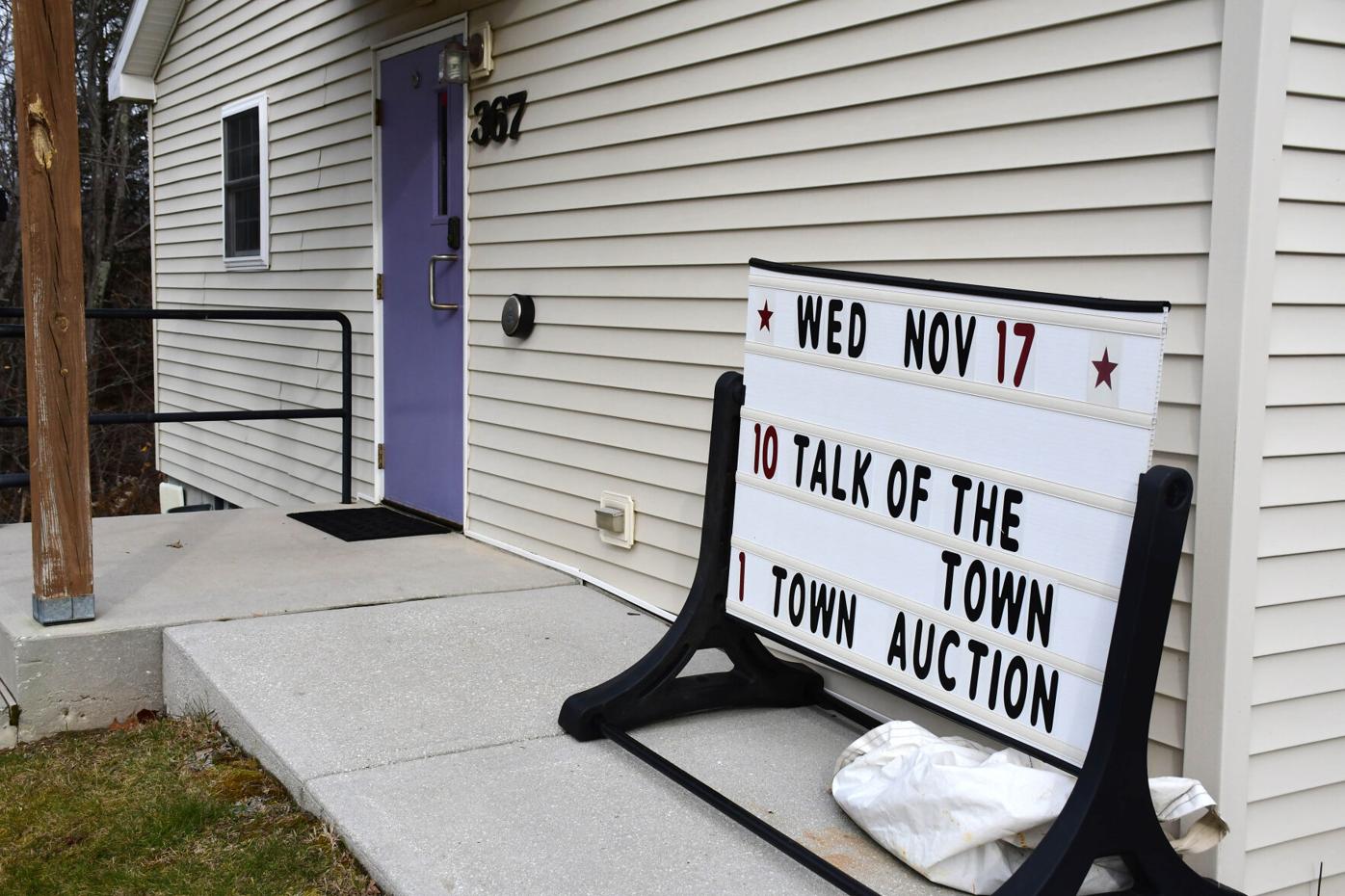 A crowd packed into the Florida Senior Center on Wednesday for an auction of town properties taken for nonpayment of taxes. Bids on 12 properties added up to $294,050, according to a tally by The Eagle. 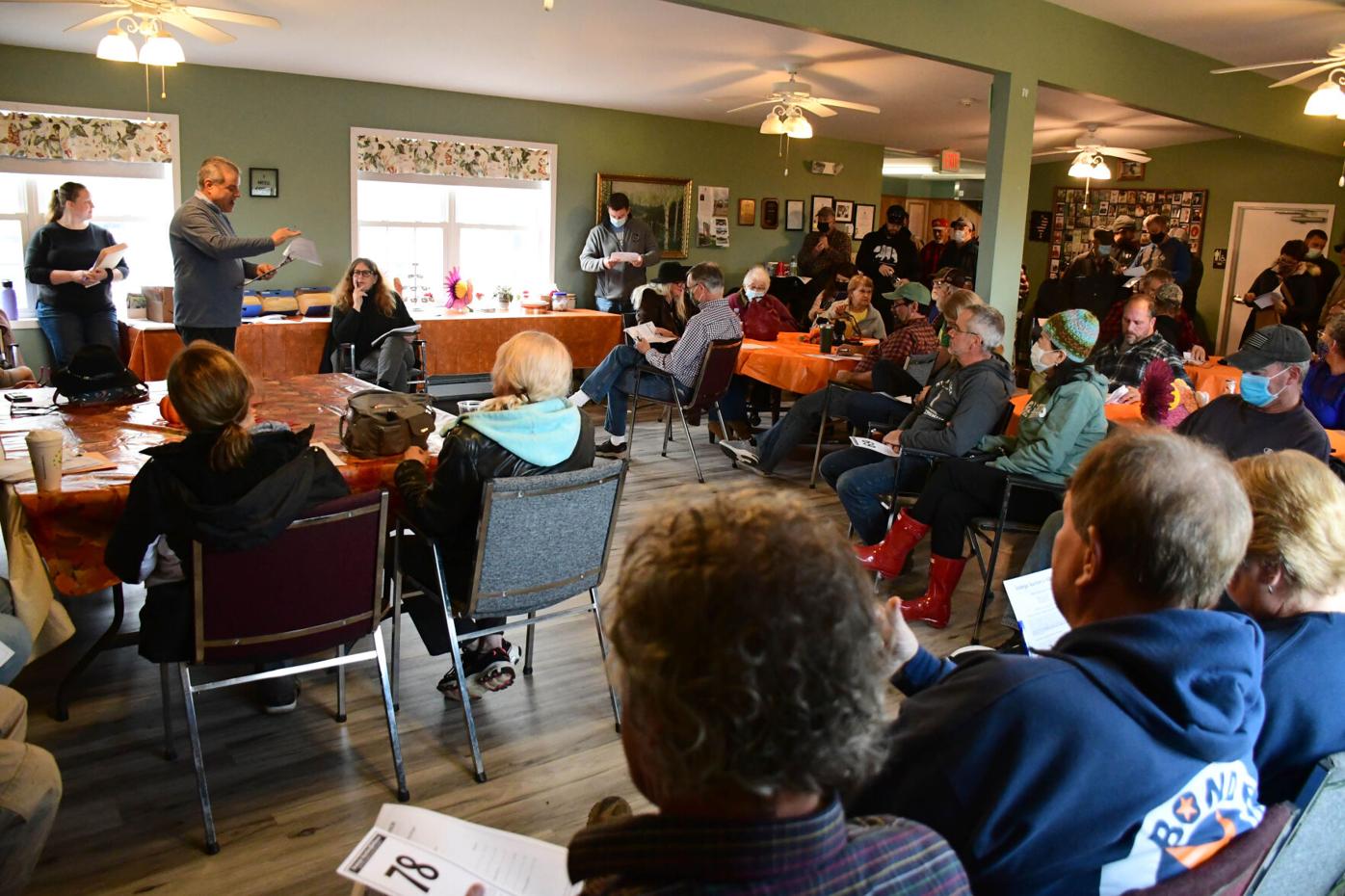 Tom Weitbrecht, of Strategic Auction Alliance, conducts the auction Wednesday. “I’m going to ask for an enormous amount of money,” he told the audience, playfully. “And you’re going to raise your hands.” 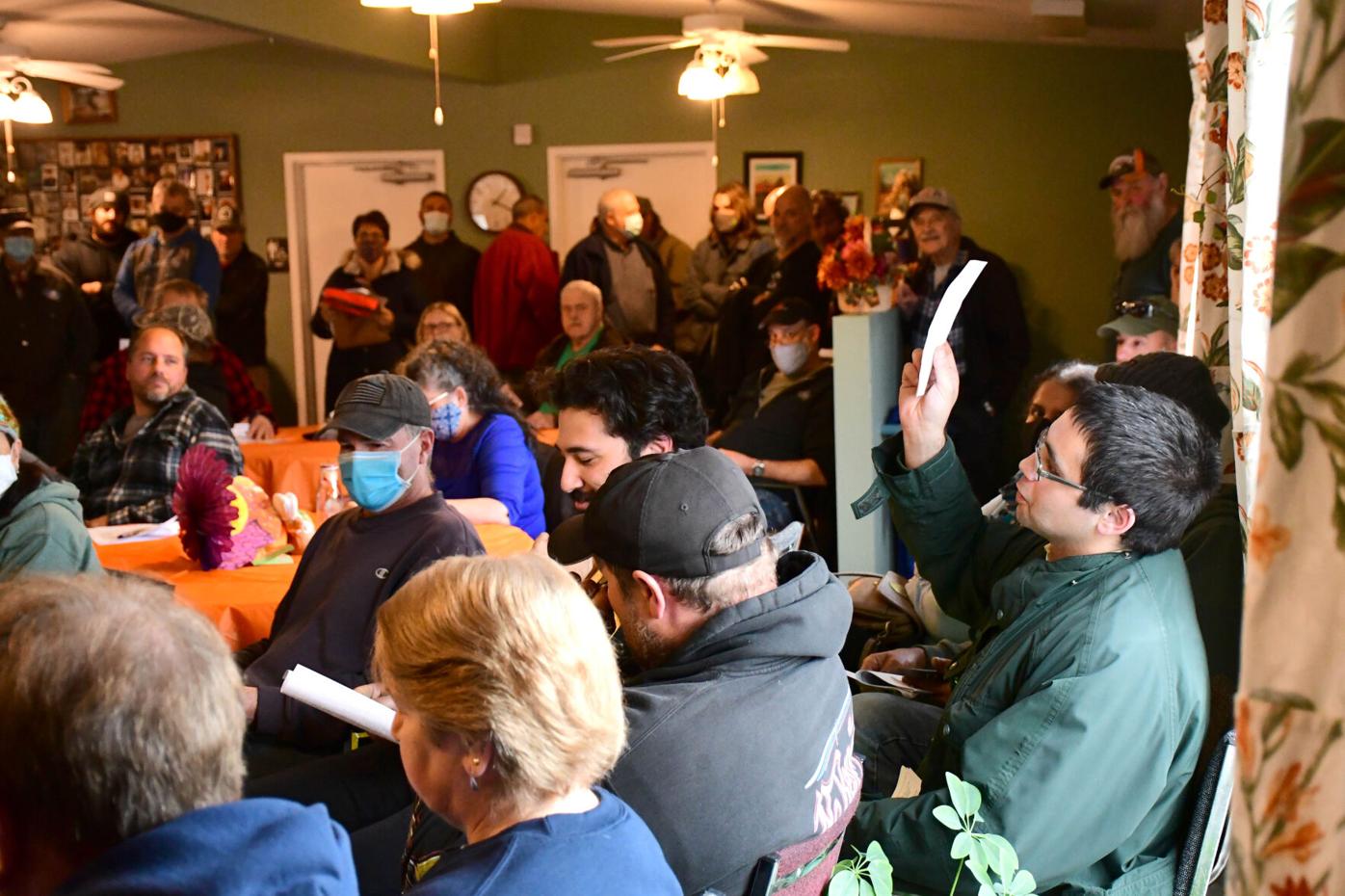 Attorney Hussain Hamdan holds up his bid card during an extended competition for a 20-acre tract on Bliss Road. The property was purchased by bidder Wayne Gelinas. 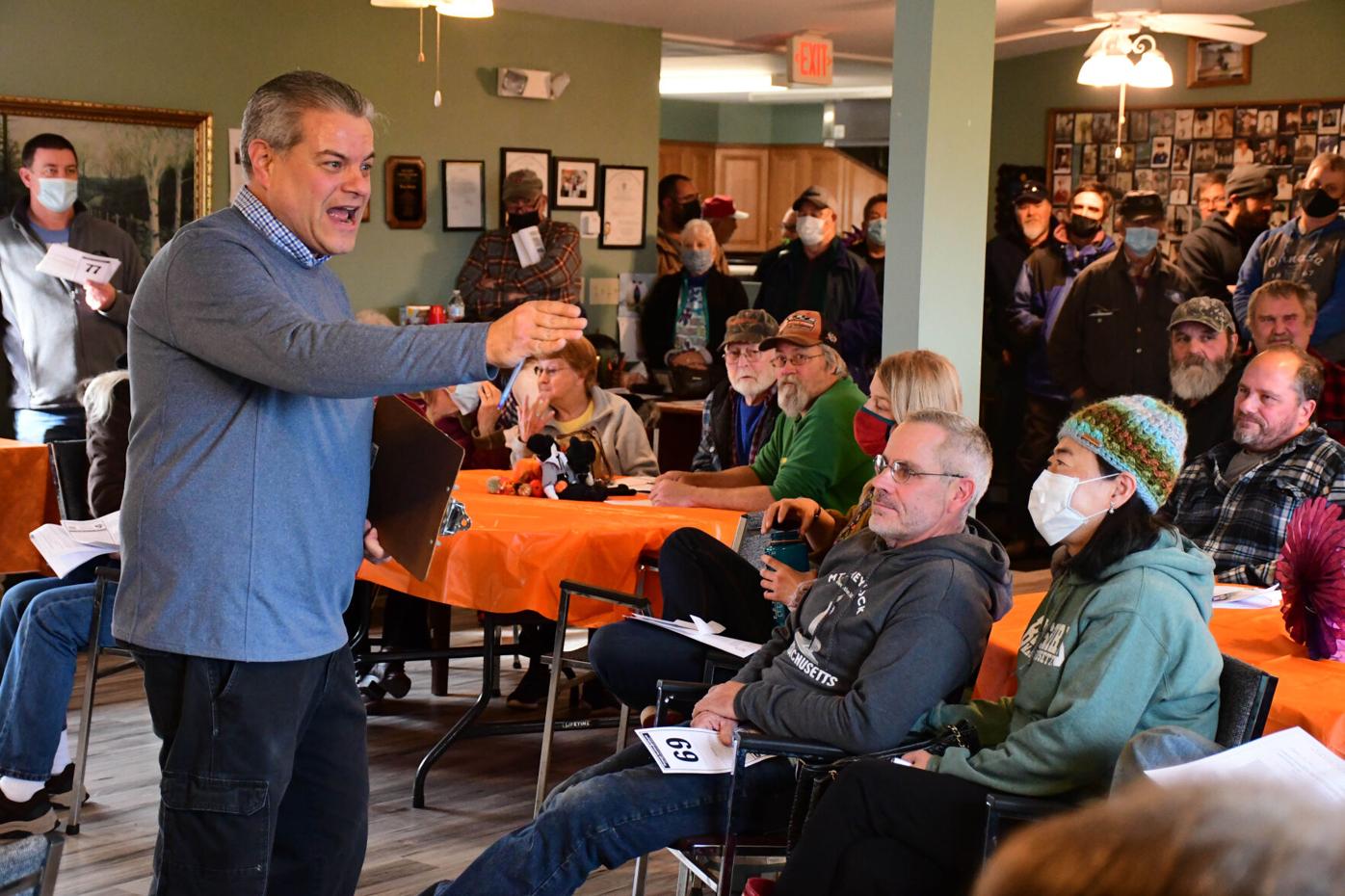 Auctioneer Tom Weitbrecht, of Strategic Auction Alliance, of Braintree, calls out the current high bid to a prospective bidder Wednesday. Sitting at right are Wayne Gelinas and Lea King, who own the Wigwam Western Summit and bought three properties Wednesday. 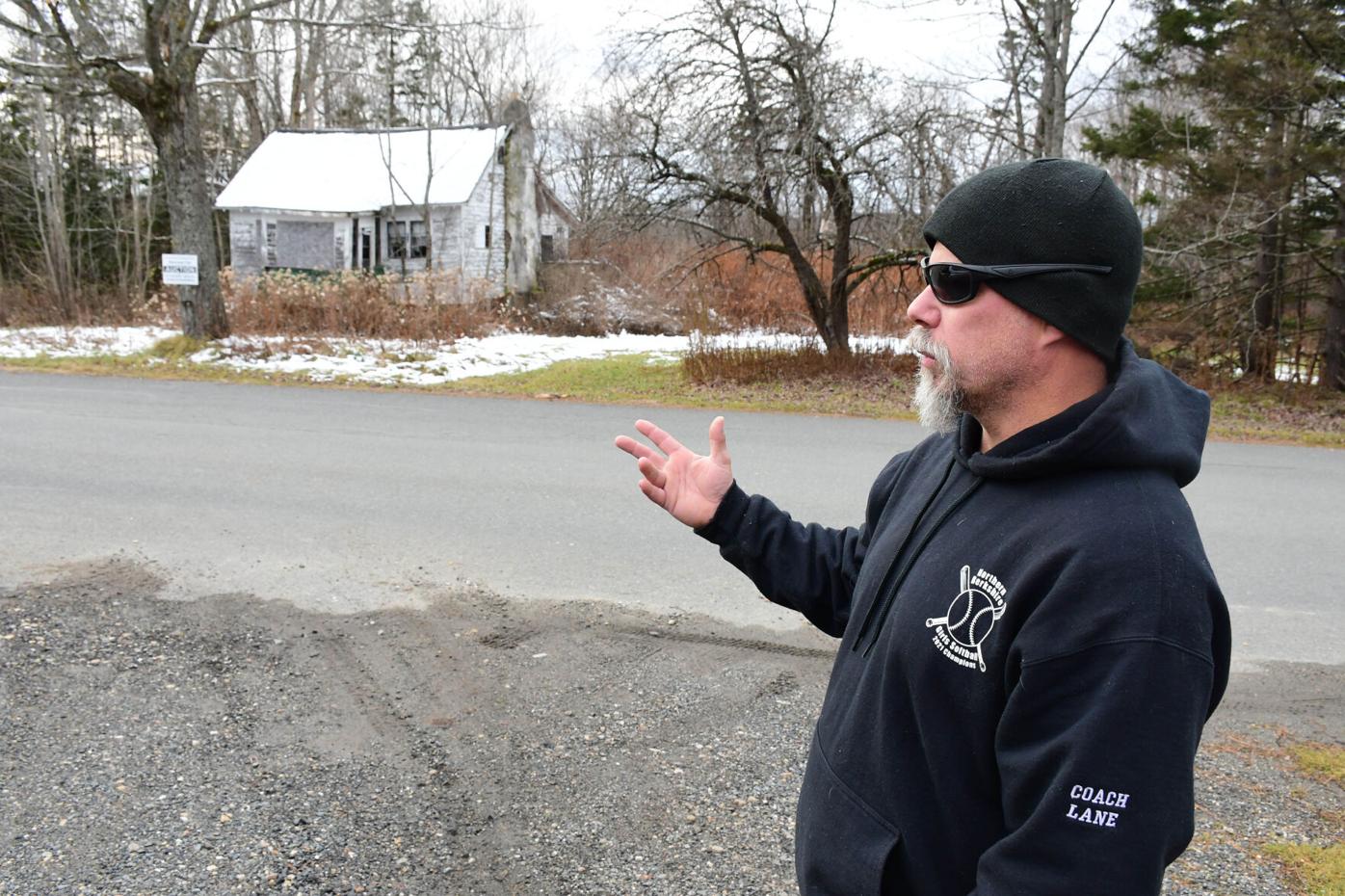 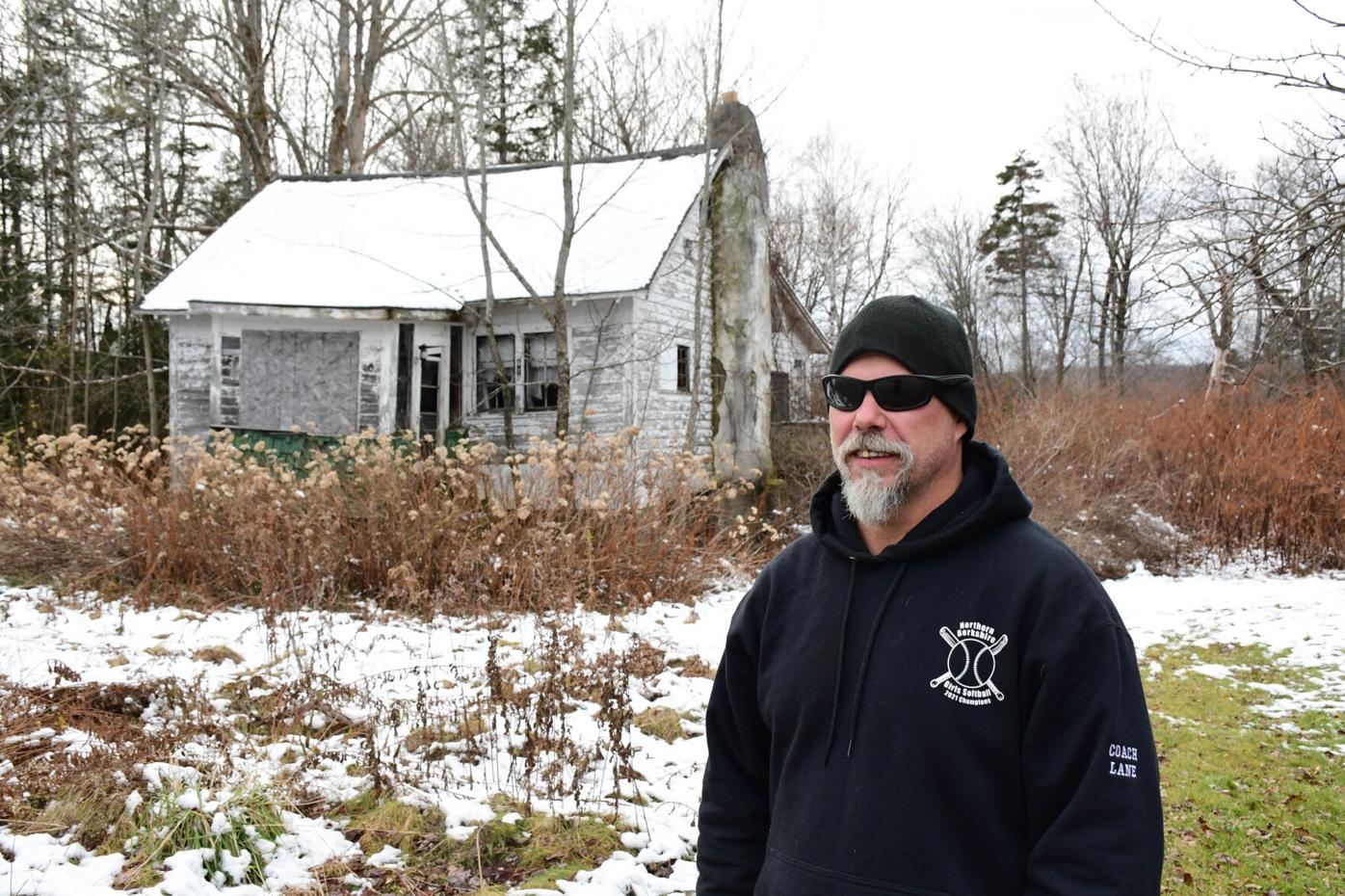 Darin Lane, of Tilda Hill Road in Florida, stands in front of the property he purchased for $10,000 at auction Wednesday. Lane, who lives across the street, said he had been eyeing the property for two decades. 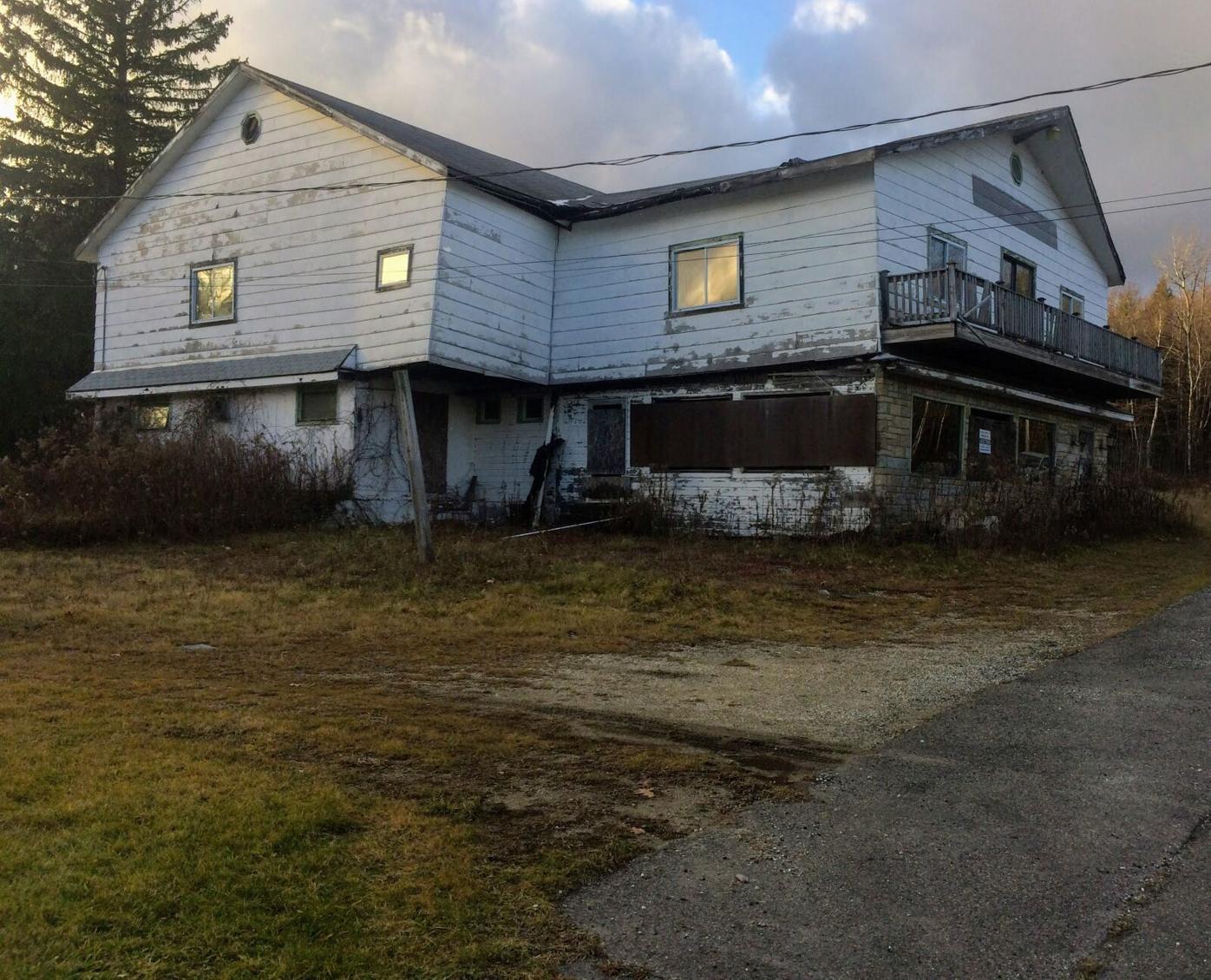 Elizabeth and Justin Henderson offered the high bid of $20,000 Wednesday to purchase the former Giovanni's Motel and Ristorante on Route 2 in the town of Florida. The couple plans to expand its self-storage business. The existing structures will be taken down, they said. 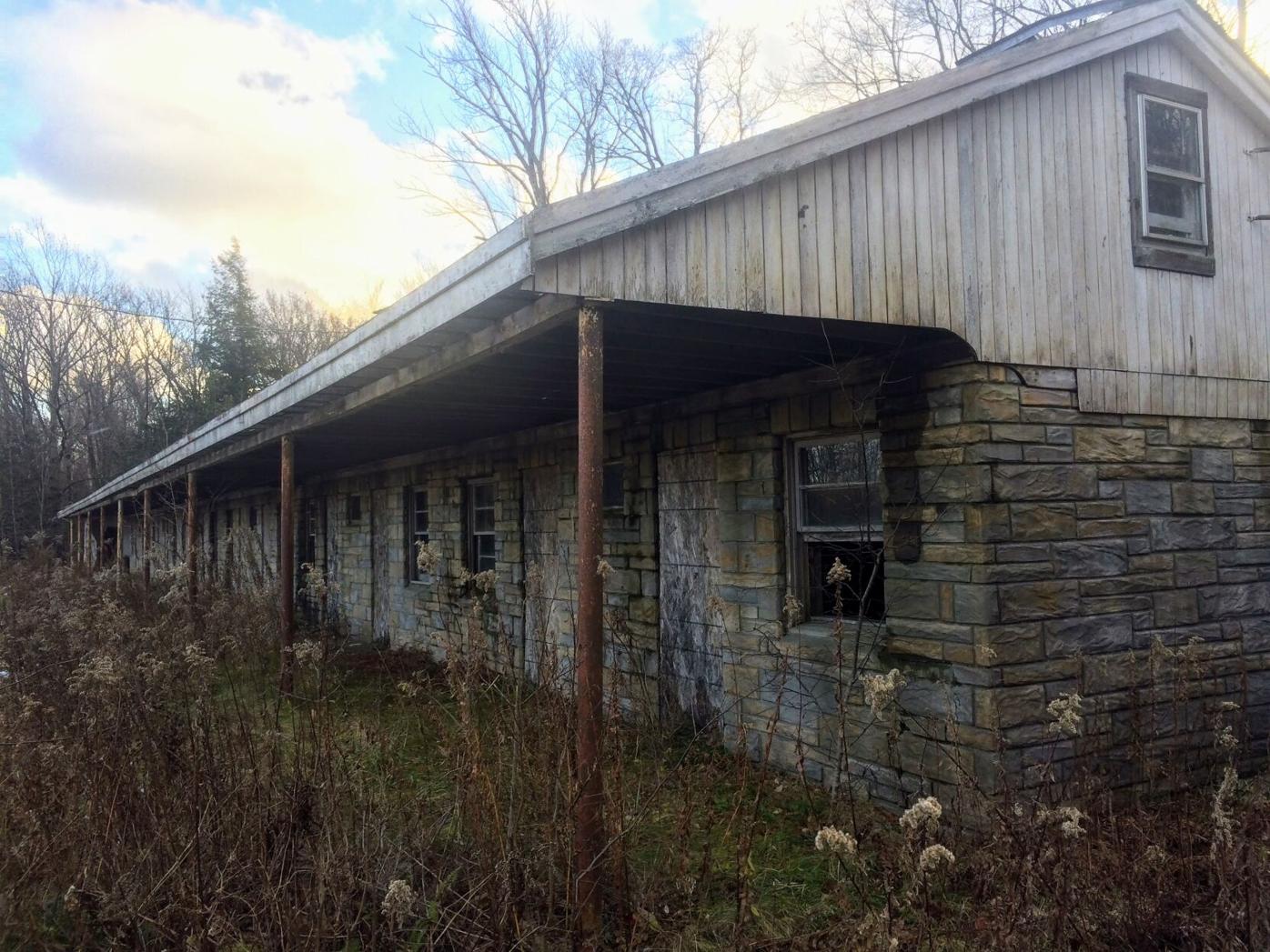 This motel unit, part of the former Giovanni's Motel and Ristorante on Route 2 in the town of Florida, will be demolished in a plan by Elizabeth and Justin Henderson to expand their self-storage business from a current location in North Adams.

Auctioneer Tom Weitbrecht, of Strategic Auction Alliance, conducts a sale Wednesday with a standing-room-only crowd at the Florida Senior Center. Sitting at right are Wayne Gelinas and Lea King.

Tom Weitbrecht, of Strategic Auction Alliance, conducts the auction Wednesday. “I’m going to ask for an enormous amount of money,” he told the audience, playfully. “And you’re going to raise your hands.”

This motel unit, part of the former Giovanni's Motel and Ristorante on Route 2 in the town of Florida, will be demolished in a plan by Elizabeth and Justin Henderson to expand their self-storage business from a current location in North Adams.

FLORIDA — If the auction deals struck Wednesday hold, the town of Florida is poised to recoup $294,050 from the sale of properties that, for years, only cost the community money.

After the dust settled, a standing-room-only crowd shuffled out of the Florida Senior Center and back into cars and pickups bearing license plates from all neighboring states. Inside, town officials were celebrating a successful sale of 12 properties taken over many years for nonpayment of taxes.

“Very pleased,” Neil Oleson, of the Select Board, said in an interview. “They went higher than we anticipated on several pieces.”

And yet, Oleson and Dobbert said the victory is tempered by sympathy, in some cases, for former owners. Maybe not, Dobbert suggested, for the man who moved into a home in Florida 30 years ago and never once paid property taxes. That home sold Wednesday.

“You feel bad about doing it to people, but enough is enough,” she said.

Before the first bids came, Tom Weitbrecht, of Strategic Auction Alliance, of Braintree, sped through a recitation of many rules and disclaimers, including that the town held the right to reject any high offers. Properties are “as is,” he said, “with no guarantee whatsoever.”

Bidding is just like on TV, he said, jokingly. “I’m going to ask for an enormous amount of money,” he said, “and you’re going to raise your hands.”

Rather than call out “sold,” Weitbrecht explained, he woud be declaring that a high bid had been posted, after which the people making those bids needed to come forward with the required “earnest” deposit and then close the sale with full payment within 30 days.

The auction’s biggest player was Wayne Gelinas, who sat near the center of the crowded room beside his wife, Lea King. The couple owns the Wigwam Western Summit a few miles west on Route 2 and has been expanding investments in Florida.

Gelinas, holding bid card 69, nodded almost imperceptibly to Weitbrecht on the way to offering high bids on three tracts of vacant land: 20 acres on Bliss Road, an additional 2.5 acres there and 2.8 acres on Tilda Hill Road.

Gelinas said later that he plans to pursue building projects. The 20-acre parcel on Bliss Road had been used during the installation of wind turbines, and once was considered for a solar project.

To secure the tract, Gelinas outlasted Hussain Hamdan, a persistent bidder who simply held his numbered card up as Weitbrecht, the auctioneer, scanned the crowd. Hamdan at one point jumped his offer up by $10,000.

Good, Weitbrecht said. “I charge by the syllable.”

“Of course I am,” the auctioneer shot back.

Weitbrecht hovered by Gelinas, seesawing between the two final bidders and declared, once the top bid was in hand: “All right! A battle royale!” The room broke into applause.

“We’re helping everyone in this town,” Weitbrecht called out. “The values are going up today.”

Though outbid by Gelinas on the Bliss Road prize, Hamdan and some associates did come away with one property. "We're going to flip it," he said later.

Perhaps the most visible of the auction lots — the derelict Giovanni’s Motel and Ristorante — might become a self-storage facility. Hulks of the old motel and restaurant, which sit on 8.3 acres in the town’s Drury section, sold for $20,000 to Elizabeth and Justin Henderson, of Stamford, Vt. Later, they described their plans to The Eagle in an interview on the property.

The Hendersons said they know Florida well and long had thought the property would suit the kind of business they own and run: Southview Storage in North Adams.

“Things came around today,” Justin Henderson said. The couple plans to seek a special permit to build a self-storage center. “It will not be hotel.” Instead, a hotel for stuff.

Henderson said he plans to take the old restaurant apart with heavy equipment he owns.

“I’m sure we’ll use some of the concrete slab,” he said.

Darin Lane’s top bid of $10,000 was enough to make him the prospective owner of the 1-acre lot and cottage formerly owned by Anthony Huttle right across the Tilda Hill Road from Lane’s home. He plans to take down the dilapidated building. The Eagle reported Wednesday on the travails of the property’s former owner.

“This is the only time I’ll ever do this,” Lane said of his auction adventure, at which he crept above the amount he hoped to pay, $7,500.

“It’s just junk. I’ll tear it down,” Lane said of the former Huttle cottage. The family might keep horses there, or, he joked, create a softball field. He was wearing a black “Northern Berkshire Girls Softball'' shirt.

In the past few days, Lane and others noticed more out-of-towners in Florida, some of whom might have been researching properties sold Wednesday. It’s not a bad place, Lane said, “if you can live through the winter.”

Derek Rougeau, a builder and former teacher, paid $10,000 for a small lot. He plans to cut in a driveway and put it on the market. “It looks like a site you can actually do something with,” he said.

For $5,250, a man made the highest offer for a 0.42-acre lot on Oleson Road that once held a mobile home. He said he wanted to help a relative who lives nearby strengthen their boundary.

Weitbrecht, the auctioneer, joined bidders later in the town offices next door to complete paperwork. Like his clients, he felt the sale went well. The reason? The strong turnout — more than 80 people — and the natural rivalry that bidding fans.

“They go in with their low number to try to steal it,” he said of bidders. “Then they get into the competition.”

Four buildings up for sale Wednesday stand empty in a Berkshires town. It wasn’t always so

Within an hour Wednesday, the town of Florida is poised to clear its slate of 12 properties taken over the years for non-payment of taxes. Each of the four buildings up for sale became owned by the town for a different reason. Here's one of them.