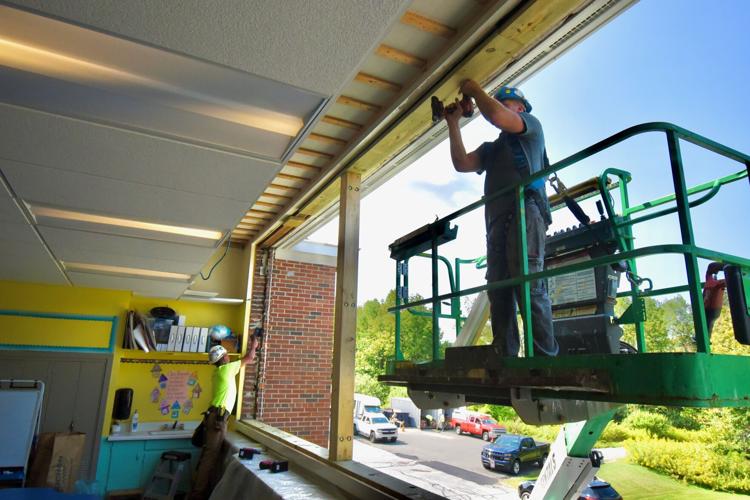 Workers prepare the window setting in a classroom at Abbott Memorial School in Florida. Delays in getting more than 100 new windows, for a $1.1 million project, pushed construction into the start of school. Work is expected to wrap up by November. 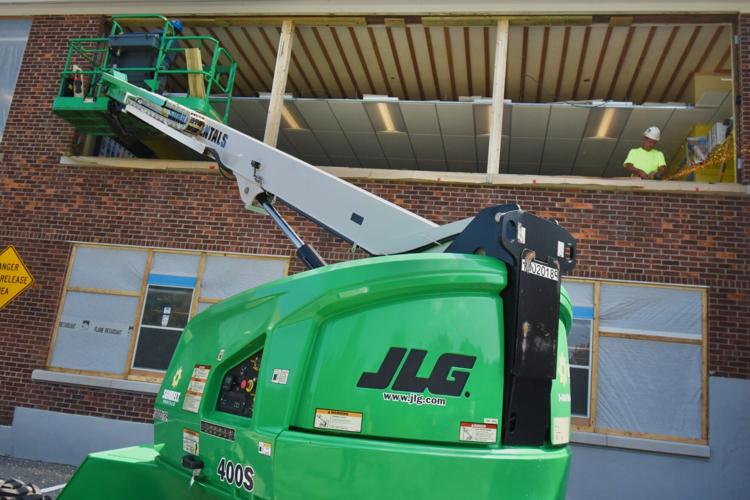 Workers prepare the window setting in a classroom at Abbott Memorial School in Florida. 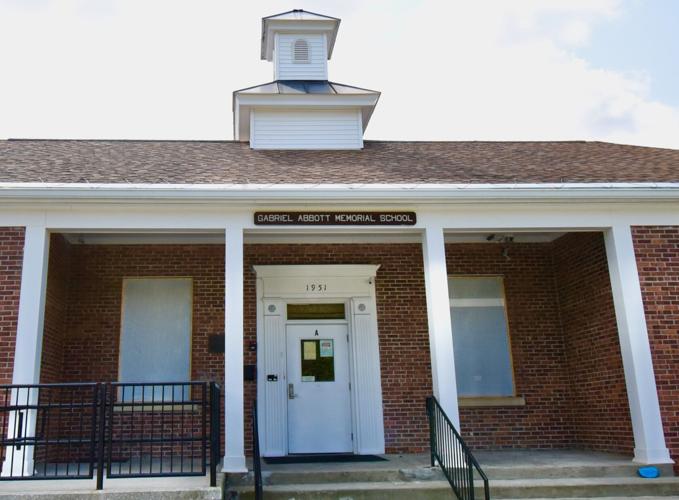 Windows in Abbott Memorial School in Florida have been removed and replaced with temporary window coverings until the new windows can be installed.

FLORIDA — A project to replace all the windows at Gabriel Abbott Memorial School is back on track after supply chain issues delayed the arrival of new windows.

According to Principal Martin McEvoy, because of the delay, work has to continue during school days in order to finish in November.

Because school has started, the project will progress by installing windows in one classroom at a time, with students in that classroom temporarily relocated to another space in the building, then returning when construction moves on to another classroom.

McEvoy said the students are taking the changes in stride, as are the faculty, and learning is continuing unabated. Abbott Memorial has 90 students this year in pre-K through eighth grade.

“They hardly even noticed,” McEvoy said. “And during the pandemic, we all learned how to be flexible, so we’re doing pretty well. The way we’re looking at it is that it’s an inconvenience that will pay off in the end.”

Though the 1951 structure’s windows appear to have been replaced in the 1980s, McEvoy said they let cold air in and on hot days were difficult to open.

The new windows provide better insulation, are tinted to prevent glare and open easily for air circulation, which is helpful to protect against COVID-19 exposure.

“We’re keeping in mind that when the work is done, the building will be much more conducive to the work we do here,” McEvoy said.

John Franzoni, superintendent of the Northern Berkshire School Union, said that when the district learned in March of the delay, officials came up with a way to get the work done safely with students and staff in the building.

Florida, Savoy await new Charter project to provide broadband, cable TV and phone service, but it could be a long wait

“The students are kept safely away from any installation work to ensure a safe learning environment without distractions,” he said.

Franzoni said the project will be complete in November. Seventy percent of the $1.1 million project is being paid for by the Massachusetts School Building Authority’s Accelerated Repair Program, with the remainder covered by the town. The Select Board approved the project last October.

There are 102 window units being replaced, plus seven entrances with new frames, doors and hardware. The windows are heavy commercial aluminum windows manufactured by Kawneer in Cranberry Township, Penn. The windows include a bottom sash that slides up and down — and a combination of vents in which the bottom portion that open for ventilation.

The windows have tinted and insulated glass for improved energy performance. The new entrances are fiberglass insulated doors manufactured by Special-Lite in Decatur, Mich.

“The town has been very supportive and is committed to doing what has to be done to keep the building safe and efficient,” Franzoni said.

He said the windows were ordered in March, in anticipation of supply chain delays, but the delays turned out to be longer than expected.

Removal of the windows and preliminary demolition work was done over the summer, and the window spaces filled with temporary plastic and wood coverings to protect the structure from the wildlife and weather.

R&R Windows based in East Hampton is handling the window replacement.

'This is a dangerous situation': Florida residents describe what it's like when you don't have reliable phone service

The dangers of living in a town with unreliable phone service became clear this week when an older man suffered a medical emergency. His wife dialed 911 on a landline but could not get through to a dispatcher. Her cellphone didn’t have a signal, either, so she ran to a neighbor’s house hoping their phone was working.