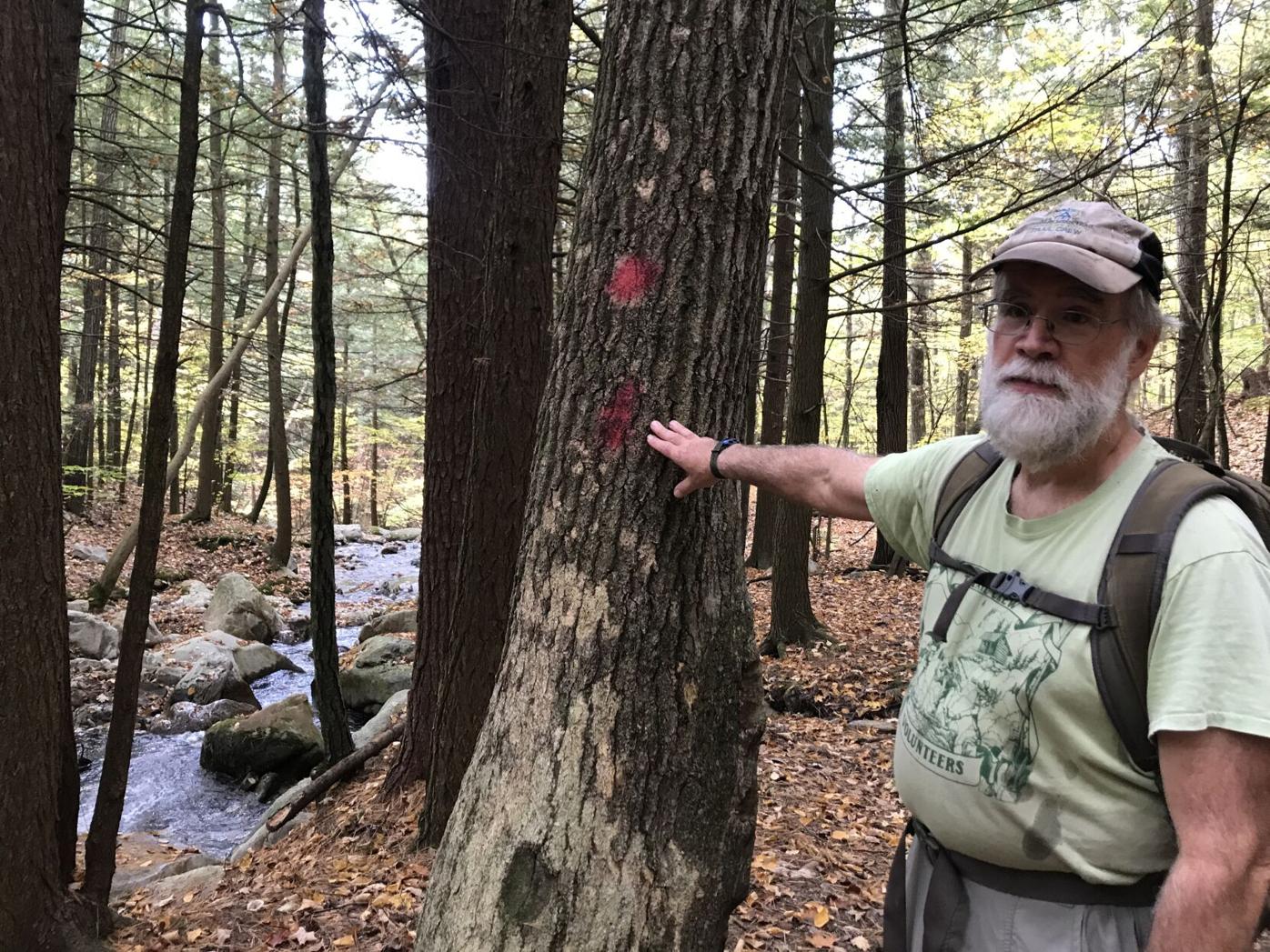 Cosmo Catalano, a volunteer with the Appalachian Trail Conservancy, points out recent vandalism on the trail in North Adams. He's been volunteering to help maintain part of the trail for almost two decades. 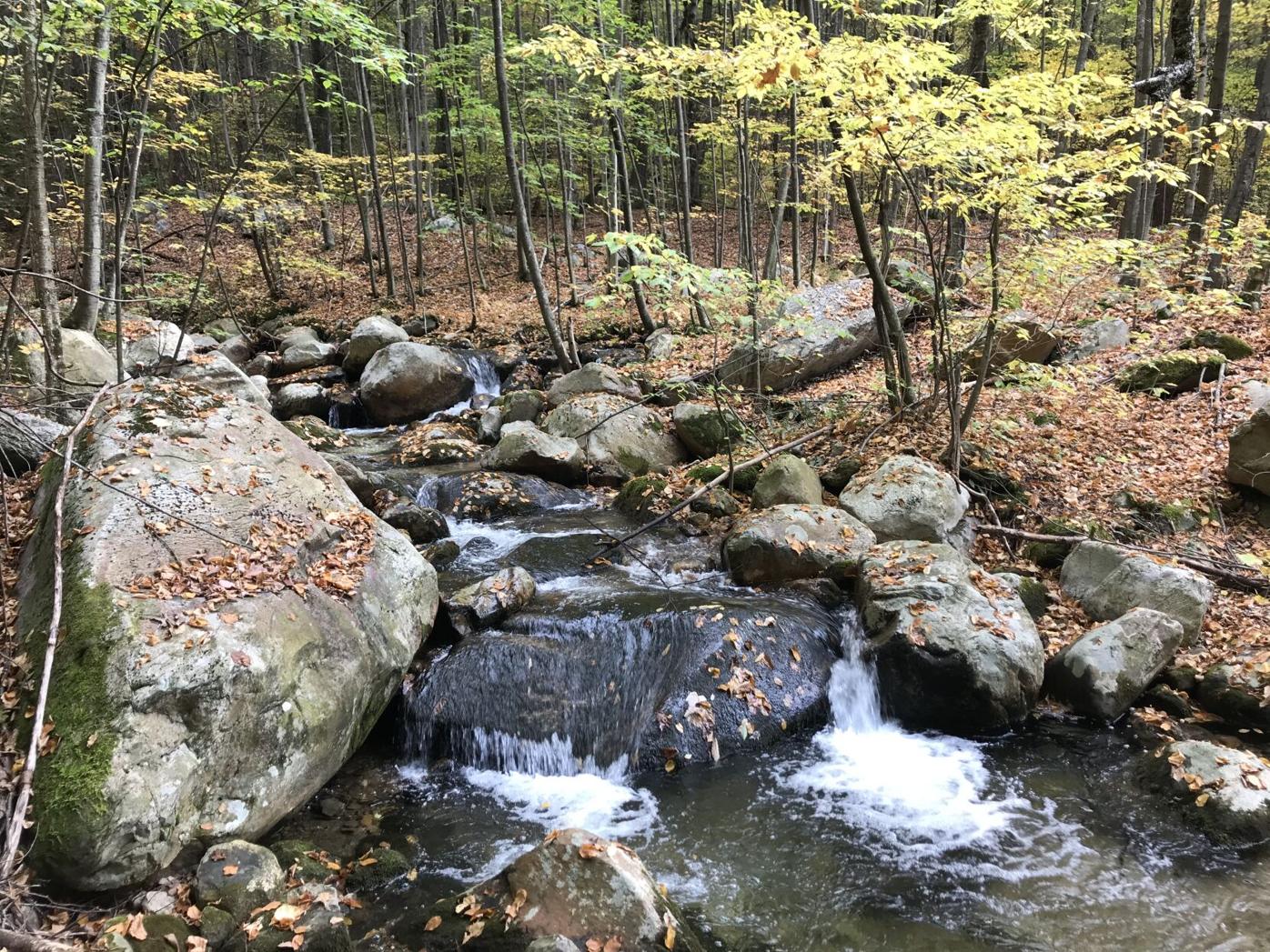 A brook on the Appalachian Trail in North Adams. 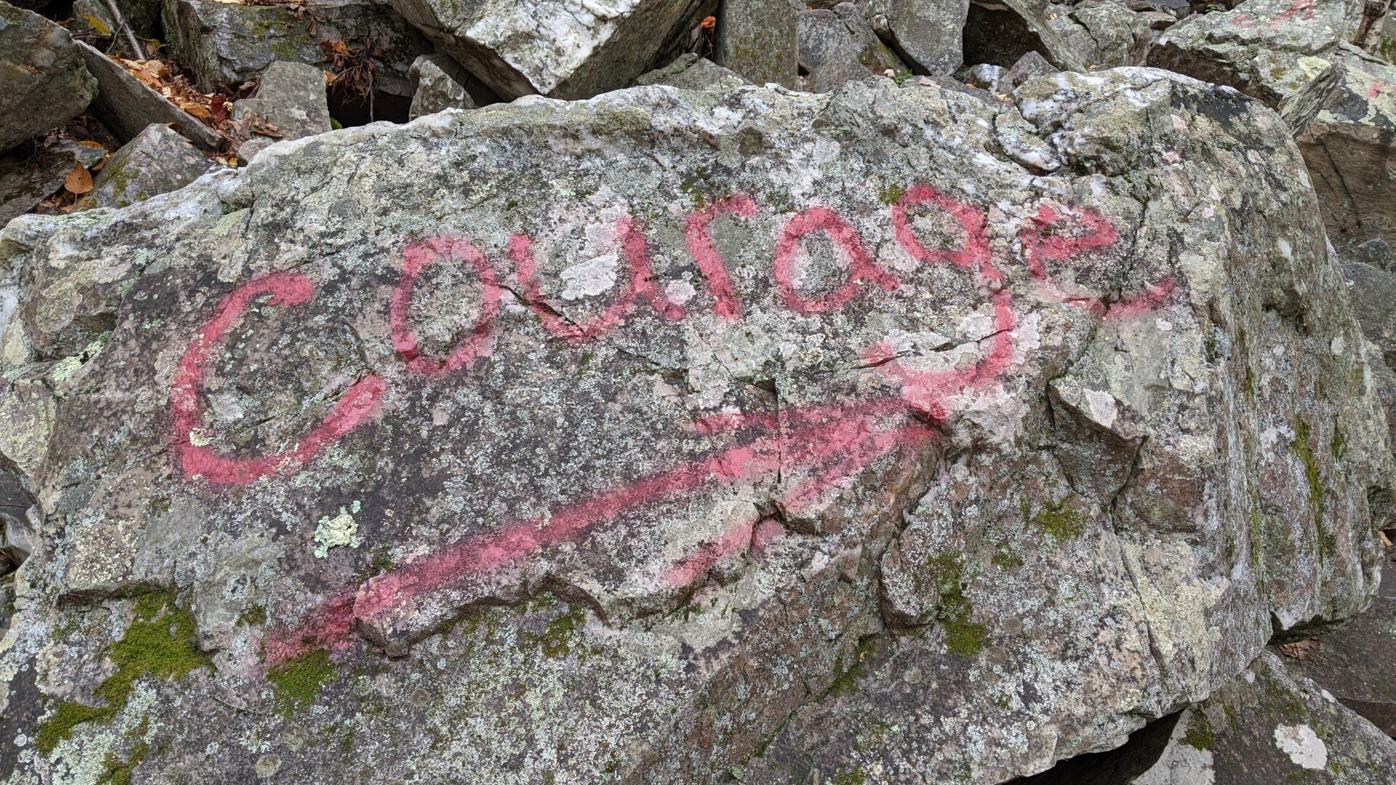 Vandalism on the Appalachian Trail spotted by Cosmo Catalano.

NORTH ADAMS — White blazes, or lines on the trees, mark the Appalachian Trail from Georgia to Maine, including through the Berkshires. But recently, red spray painted lines, arrows, and drawings on trees and rocks popped up over a two mile section of the trail off of the Massachusetts Avenue entrance in North Adams.

Cosmo Catalano spotted the vandalism on Sunday and reported it to the state Department of Conservation and Recreation.

"One of the things that bothers me about this paint is it's a beautiful spot," he said, standing on the trail covered in gold and red leaves next to a trickling brook. It is "quintessential New England," the longtime Williamstown resident said while hiking the trail on a recent morning.

Catalano is in charge of monitoring the last 2.5 miles of trail in Massachusetts before the Vermont border as a volunteer with the AMC Western Massachusetts Appalachian Trail Management Committee, and he walks through the section that was recently vandalized to get to his area, he said. He visits regularly and has walked the path well over 100 times.

In his years of volunteering, he got to know the neighbors living near the trail and learned where the rare plants grow, and now, he notices how the understory bounced back from a fire over the summer.

Volunteers are not full-on park rangers, he said, they are "just eyes and ears."

For example, Catalano and other volunteers do regular counts of some of the rare plants on the trail and report the information back to DCR and the National Parks Service. "We want to track their health," he said of the plants. If a plant that usually grows in the south is making it way northward, "maybe that's an indication for climate change," he said. To prevent people from coming to pick them, he didn't want to name the specific rare plants.

He and other volunteers created a rock staircase up a sloped area of the trail by dragging rocks from the hillside. Another project: addressing a small clearing in the woods near the brook that was being used as a rogue campsite — a danger to some of the rare plants in the area, Catalano said. He and other volunteers helped rehabilitate the area and put up signs telling people not to camp there.

While walking, he cleared a large tree branch from the trail. "All you have to do is step on that wrong and your hike is over," he said.

He started volunteering in the 1990s after he saw an ad in the newspaper for trail volunteers. "It's kind of a fun hobby for a retired guy," he said.

Before retiring, his day job was managing productions for performing arts at Williams College, a job he sees as similar to trail maintenance. In both, he said, "you're working backstage."

He's never hiked the more than 2,000 miles of the Appalachian Trail — he doesn't have the patience, he said — but he is well acquainted with the section in North Adams and Clarksburg. And the recent graffiti, which he thinks occurred sometime between early September and mid-October, is the worst he has ever seen on the trail.

"That's very blatant," he said, pointing to some of the markings.

As winter approaches, he hopes the weather will help fade some of the marks, and said there will likely be a cleanup in the spring. But cleaning the paint off is not easy, he said. Environmentally-friendly supplies need to be used and care needs to be taken prevent damaging the trees.

Is his group looking for volunteers? "Always," he said, by emailing at@amc-wma.org.