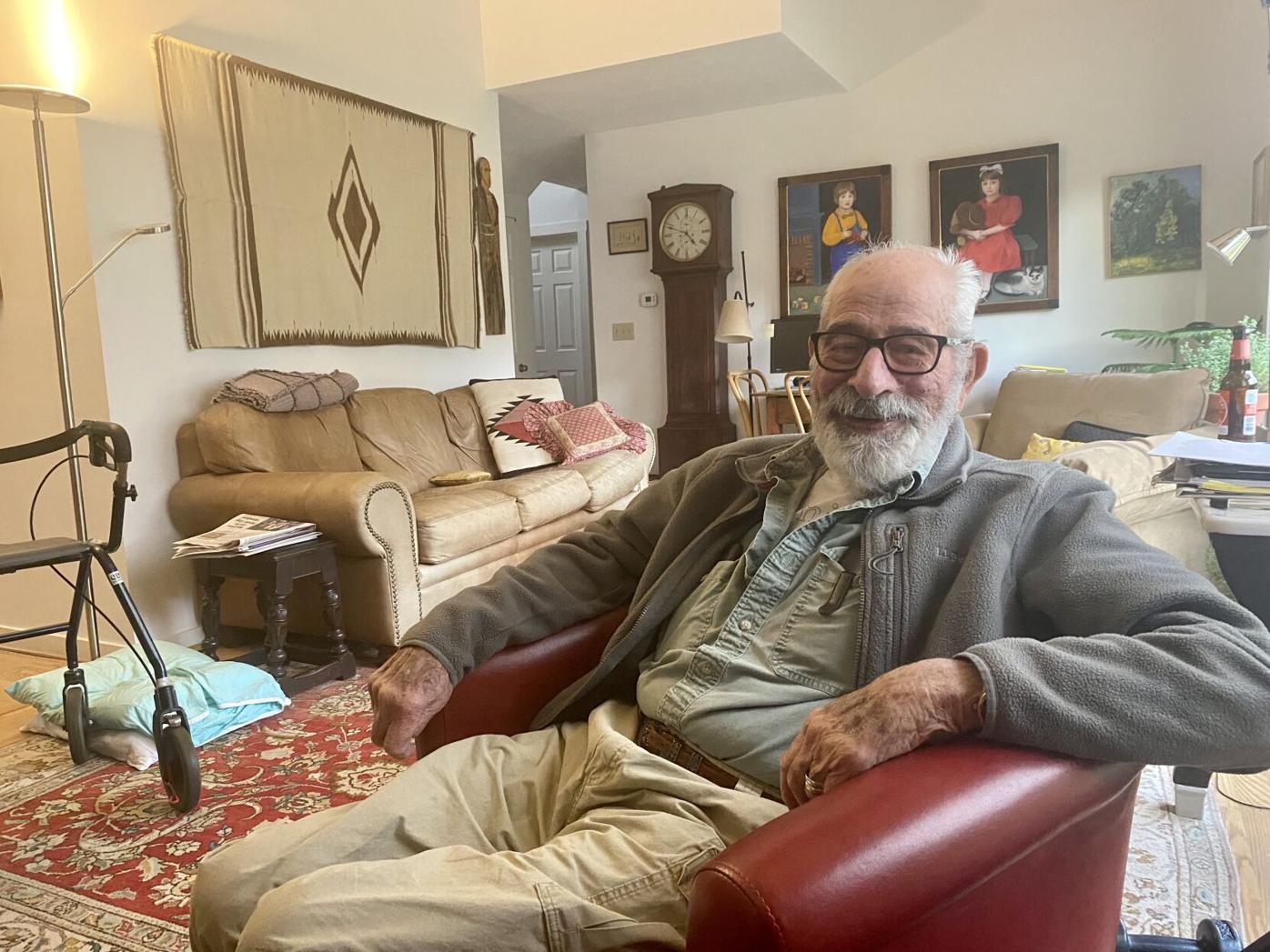 Marc Jaffe, at home in Williamstown. 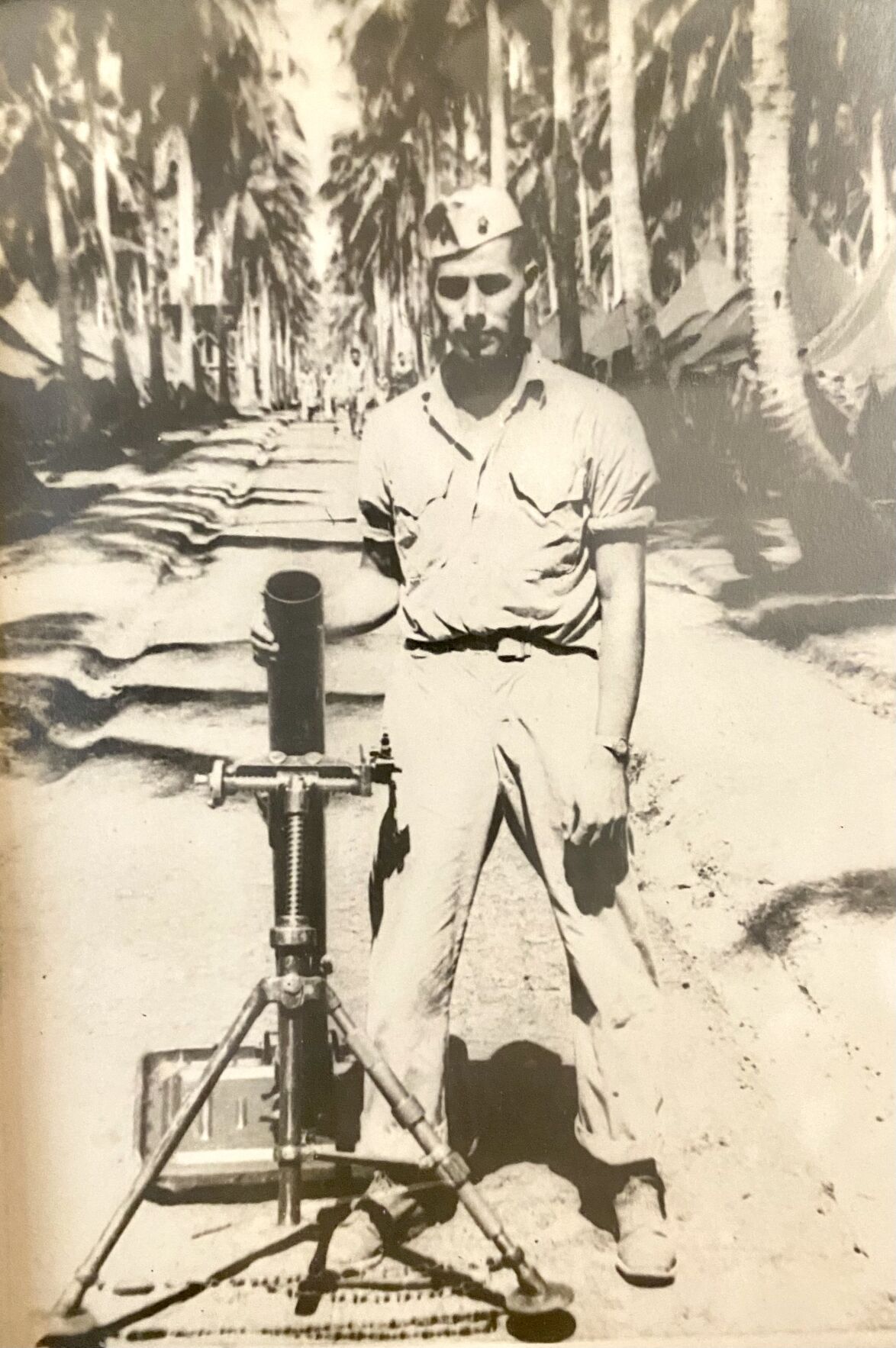 Marc Jaffe, at home in Williamstown.

With the words on behalf of President Harry S. Truman dating back to World War II?

In a letter that accompanied the Bronze Star that Jaffe earned for his actions in Okinawa in June 1945, the presidential citation referred to Jaffe’s “dauntless spirit” and “cool courage, determination and gallant devotion to duty.”

Do you begin with the words from The New York Times?

That publication once referred to Jaffe as “one of the most highly regarded editors in the mass-market paperback field” and a “shrewd judge of mass taste.”

Jaffe will talk about his three years with the Marine Corps, during which he fought in some of the fiercest battles in the Pacific. He’ll talk about his life as an editor working with the likes of Norman Mailer, Gore Vidal, Louis L’Amour and many others.

“Whatever you want to talk about,” he said during a visit last week to his home in Williamstown that he shares with his wife, Vivienne.

One thing: He’ll decline to speak on the record about his private meeting with “The Catcher in the Rye” author J.D. Salinger, out of respect for Salinger’s well-known preference for privacy. So scratch that off the list. Jaffe’s a gentleman, after all.

Jaffe’s longevity? He attributes that and most of the other good things in his life, including the fact his memory remains intact, to good luck and doing all things — many, many things — in moderation.

One hundred years ago on Nov. 6, Marcus H. Jaffe came into the world, the second of three sons born to Samuel and Lily Jaffe of 309 Pine St., Philadelphia, Pennsylvania. His father was a family doctor. His mother was a social worker and a teacher. His childhood was a happy one.

Turns out one of the few people to ever call him “Marcus” would be the President of the United States, in that Bronze Star citation, and his old pal Gore Vidal, who simply liked the Latin ring to “Marcus.”

He was “Marc” to everyone else, through the Great Depression, through World War II, through a celebrated career during the so-called “golden age” of paperback publishing, to the present day in which he still edits books and still shows up for Veterans Day remembrances in his adopted town of Williamstown, where he’s lived since 1989.

A Marine in the PacificA 1942 graduate of Harvard University, where he studied literature, Jaffe joined the U.S. Marine Corps as an officer candidate.

Following boot camp at Parris Island and further training at Quantico and Camp Lejeune, he boarded the USS Orizaba transport ship in San Diego in December 1943, and ultimately joined the 2nd Battalion, 1st Marines, as the forward observer in the 81-mm mortar platoon.

He was among the first wave of Marines to land on the island of Peleliu in the western Pacific on Sept. 15, 1944.

The mission was to secure the island, presumably for use as a stepping stone to retake the Philippines.

The island had been bombarded by the U.S. Navy in the days leading up to the landing. The ground assault had been expected to last 72 hours. Instead, it took 73 days. The Marines were met with fierce Japanese resistance.

“We had at least 26 out of the platoon that I went in with either wounded or killed in that first half hour or so on the beach,” Jaffe said.

Jaffe made it off the island with only a scar on his right knee.

Following Peleliu, he had some rest in the Russell Islands before being sent off to Okinawa, where he was promoted to commander of G Company.

He recalls the rain, the mud, the bullets and young men falling all around him. One night in a trench, trying to keep the pelting rain off him by means of a poncho, he said to himself, “God d—, if I can get through this, I can get through anything.”

He earned the Bronze Star specifically for his actions from June 1 to June 15, 1945, which included a successful nighttime attack on a ridge and holding his position when his company had been cut off from all other U.S. military units.

All told, Jaffe is not certain he ever killed anyone in the war. He knows he saved a man’s life.

“This was back on Peleliu,” he said. “He was hit in the neck by shrapnel, and I was very close to him. I saw the blood come rushing out of him, and I put my hand on his neck, held it.”

A medic soon arrived by his side and took over. The man survived.

“I think that was the most important thing I did my whole military career,” Jaffe said.

“The fact is that I lived through it,” he said. “I was lucky to have great, great comrades who I fought with, and I don’t mind ever talking about it.”

A man of many wordsFollowing the war, Jaffe casted about for a career. In New York, an employment agency helped him land an editorial clerk position with the men’s magazine Argosy, which published fishing, hunting and Western genre stories.

“I had an opportunity to work with at least one important author when I was an editorial clerk at Argosy,” Jaffe said. “Yeah, a story came in, called — I forget the title of it, but it became a novel called ‘Shane.’”

“Vivienne,” he called out to his wife, who was working in the other room. “Who was the author of ‘Shane?”

Jaffe, all these years later, remembers most of the names he tries to recall, and those names he can’t recall, he’ll ask Vivienne. She can remember pretty much everything.

He definitely recalls that, with some publishing experience under his belt, he went to a literary agent named Mike Watkins, who promptly picked up the phone and called his friend Victor Weybright, who at that time was editor-in-chief of the publishing company the New American Library. Jaffe was brought on as associate editor in 1948. That’s where he learned the publishing trade.

“My specialty, because I’d worked for a men’s magazine, was mysteries and westerns, neither of which I knew very much about, but that’s what they needed,” Jaffe said. “I was there for nine years.”

Among the writers he worked with there was Mickey Spillane, writer of hard-boiled detective stories. “We got to be great friends,” Jaffe said. “He created this character, Mike Hammer, and it became a sensation. Really, we sold millions of copies.”

Jaffe then had an 18-year run with Bantam Books, where he became editorial director. From there, beginning in 1980, he moved to Random House and Ballantine Books before eventually having his own imprint under Houghton Mifflin.

All along the way, he has had his hand in the publishing of everything from cookbooks to Plato, and he has helped make literary history.

“It was all a special time, working with a great group of people, all of us working together,” he said.

Another great friend was Vidal. As Jaffe recalled, money had gotten tight for Vidal, so Jaffe and Vidal successfully sought to change that by having Vidal write a series of mysteries under the name of Edgar Box.

“He earned enough money that he didn’t need to write any more mysteries,” said Jaffe. “He then sort of zoomed up after that and became, what? One of the four or five most important literary figures.”

“At this party, he told me that he had a story in mind that he wanted to write, but that no publishers had any interest in. I asked him about the idea.”

Blatty wanted to write about a 12-year-old possessed by a demon and about a Catholic priest who performed an exorcism.

“I mean, intuitively, I sort of responded to the idea of exorcism,” Jaffe recalled. “He just had to tell that story, and I said, ‘Bill, you want to do it? We’ll take it.’ Just like that, at the party.”

“The Exorcist” topped The New York Times Best Seller list for 17 weeks and sold more than 13 million copies in the United States alone. Blatty went on to win an Academy Award for the screenplay.

Despite the successes dating back to his early career, Jaffe remained humble. He had no choice, considering the time in the mid-1960s in Sag Harbor, N.Y., when he saw John Steinbeck himself walking down the sidewalk.

“I had been publishing his books, and I was just thinking, ‘Here’s my chance, you know?” he recalled.

“He just walked right by me,” Jaffe said with a laugh.

The life ahead of himYes, Jaffe still edits books. And he said he’s feeling “reasonably well” these days.

OK, so 100 years of life behind him, does he have any advice for the younger generations?

“You have to consider people and the world around you,” he said. “You have to take responsibility for not only yourself, but others. Get together with somebody that you can work with to accomplish something of importance to the world at large or to your own immediate community.”

He hastened to add, “And read a lot.”

He said he doesn’t fear death.

He still loves to eat a good dish of salmon.

He said trying to put his life into any sort of perspective eventually grows tiresome.

“What I have told myself is, it’s not a culmination, it’s not an achievement,” he said. “It’s the beginning of Marc Jaffe’s second century.”