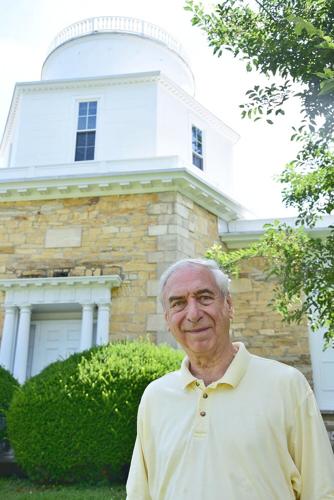 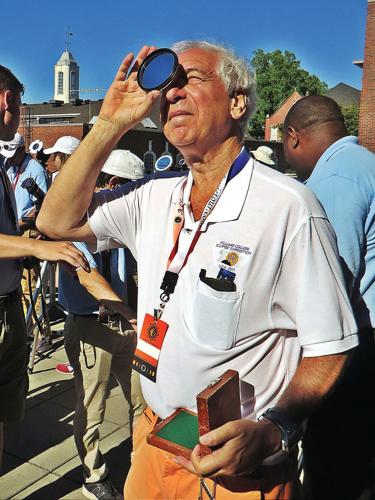 Williams College astronomer Jay Pasachoff views his 66th solar eclipse with students on his expedition team to document the Aug. 21, 2017, event at Willamette University in Salem, Ore. He died Sunday in Williamstown.

WILLIAMSTOWN — As an astronomy major at Williams College in 2006, Anne Jaskot traveled with Professor Jay Pasachoff to the Canary Islands to study the sun through a solar telescope.

It was her first trip to a professional observatory. “I got to see science in action. ... The whole experience was really memorable and striking,” said Jaskot, now herself an assistant professor of astronomy at Williams College.

She was one of many students who Pasachoff involved in his astronomy research trips over his 50-year career at Williams College.

“One of his greatest strengths was how he always looked for opportunities to involve students in research,” Jaskot said. “He was known for traveling the world to see solar eclipses — on all of those trips he was accompanied by a group of students.”

Jay Pasachoff, the Williams astronomer who pursued eclipses across the globe, dies at 79

On Sunday, Pasachoff, 79, died of lung cancer at home in Williamstown, according to The New York Times. He started working at Williams in 1972 and was chair of the college’s astronomy department and director of the Hopkins Observatory. He saw more than 70 solar eclipses during his lifetime. His colleagues remember him as an accomplished scientist, skilled writer and science communicator, and a dedicated educator.

“He was always very energetic and very busy. Always planning, there was always another eclipse expedition,” said Karen Kwitter, a Williams College professor of astronomy who worked with Pasachoff for 40 years before she retired in 2019. Until a few weeks ago, he was still teaching and planning an eclipse trip in 2024, she said.

He traveled to see solar eclipses all over the world, including in India, Chile, Tasmania, and in a plane over Antarctica. In 2017, for example, students accompanied him to observe a solar eclipse in Oregon, his 66th.

“He used the observation of eclipses to do something that’s almost impossible to do in any other circumstances to,” said Brian Keating, professor of physics at the University of California San Diego. That’s looking at the sun’s corona, its outer layer, he said.

”We’re here for the science, yes,” Pasachoff wrote in an 2010 New York Times article about solar eclipses. “But there’s also the primal thrill this astronomical light show always brings the perfect alignment, in solemn darkness, of the celestial bodies that mean most to us.”

Pasachoff saw his first solar eclipse when he was 16 and a student at Harvard, where later he studied the solar chromosphere in his PhD studies.

A key figure in his field, his work in solar astronomy was well-known, said Kevin Flaherty, a Williams College lecturer in astronomy who also supervises the school’s observatory.

“He’s the type of person who if you didn’t know or weren’t excited about the next solar eclipse he’d be surprised and he’d spend the next 20 minutes telling you about the next solar eclipse,” Flaherty said. He was always excited to meet astronomy students, and if a student showed a hint of interest in astronomy, Pasachoff would suggest they major in it, Flaherty said. “He had an enormous impact on the department. He was a central figure for such a long time.”

His work inspired people from far outside of Williams to study astronomy, also.

“Jay was one of the main reasons I am an astronomer,” Keating said. Pasachoff’s edition of “Peterson Field Guide to the Stars and Planets” got Keating interested. The book combined art and science and had the readability of a novel, he said. Later, they met professionally and became friends.

“Even when he was ill, he continued to mentor until the last few weeks of his life,” Keating said. “Astronomy has lost its brightest luminary.”

'I hope it inspires': Astronomer Jay Pasachoff sees launch as another small step

In high school, Jaskot remembers using one of Pasachoff’s textbooks, which also helped spark her interest in astronomy. “It’s one of the things that made me think, ‘This is a career I could be pursuing,’” she said.

Jesse Spector, a retired doctor from Lenox, is auditing a course Pasachoff was teaching this fall at Williams.

“His textbook is a real problem,” a student complained to Spector about the book Pasachoff co-authored, “The Cosmos: Astronomy in the New Millennium.”

“It’s so heavy I can’t read it in bed,” the student told Spector.

For Williams astronomer with eye for eclipses, journey to Chile finds best seat in the house

It’s true, Spector agreed. “You have to be in a sitting up position,” he said with a laugh. “You wonder, how could you have all of that in one brain?” he said, while taking a break from studying the textbook in question for midterms. “I want to know one-tenth of what he knows.”