NORTH ADAMS — Victoria Guntlow called police in April 2021 asking why emergency vehicles were near her house, a lawsuit filed in U.S. District Court in Springfield alleges. Police came to her home and arrested her, breaking her arm in the process.

Several months later, she drowned in a bathtub in her yard while trying to soothe an injury linked to her arrest, the complaint says.

A representative of Guntlow’s estate filed the civil rights lawsuit May 3 naming the city and four of its police officers — Preston Kelly, Dana Clement, Matthew Meranti, and David Sherman — as defendants. The action, filed by Pauline Guntlow, seeks $600,000.

Both Pauline Guntlow and her attorney, Luke Ryan, declined to comment Tuesday on the lawsuit. Mayor Jennifer Macksey did not immediately return a request for comment late Tuesday afternoon.

Chief of Police Jason Wood said in a text that he had just learned of the suit and needed to review it.

Sherman and Kelly did not immediately return calls seeking comment. The Eagle could not locate contact information for Clement and Meranti. 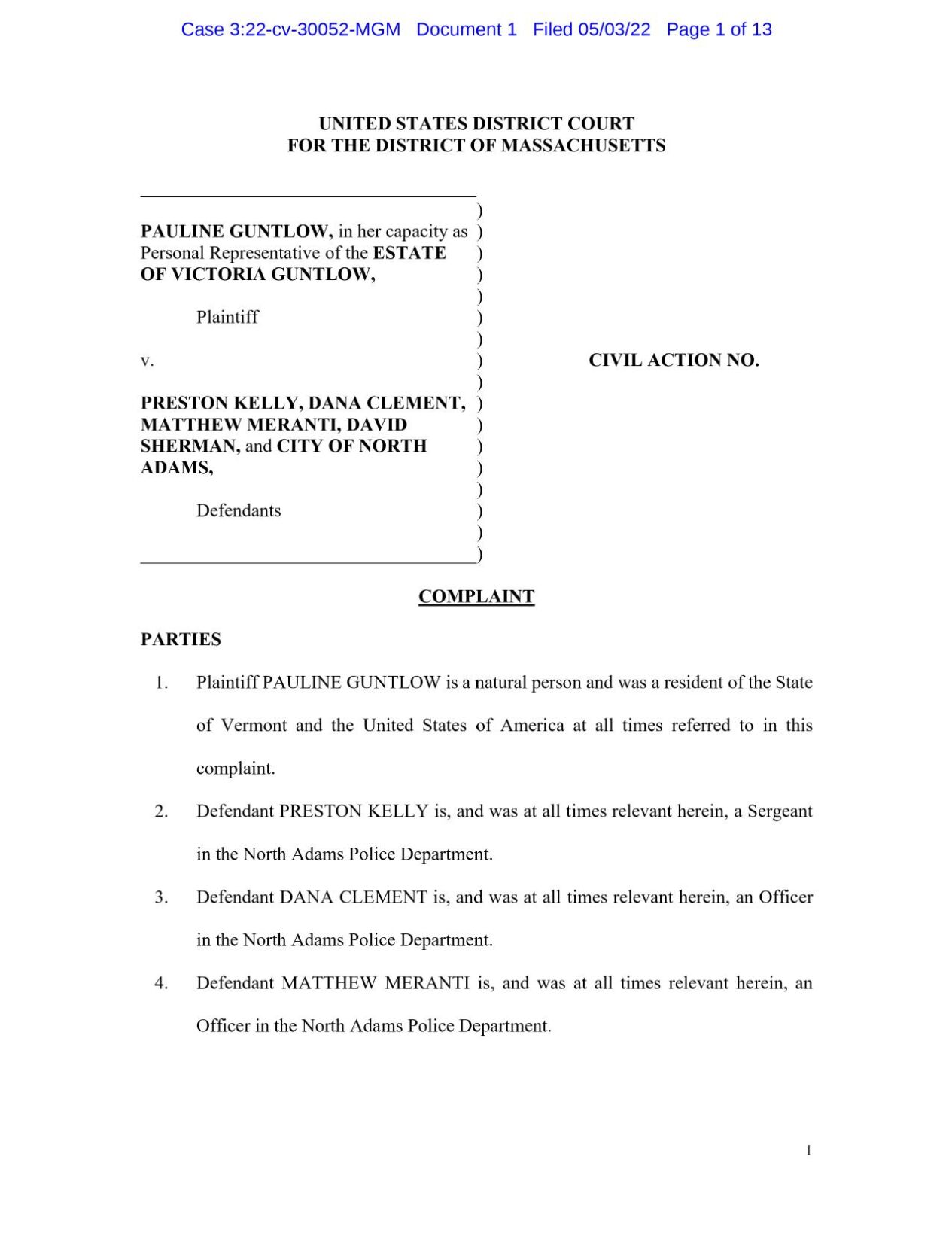 In April 2021, Victoria Guntlow was worried when she saw emergency vehicles near her house because there had been a recent homicide. She called 911 and the police non-emergency number to ask for information but did not receive any, the complaint says.

All four officers named in the lawsuit did a “well-being check” on Victoria Guntlow after determining that she had made “unnecessary use of 911.” She had called 911 about three times and the non-emergency number about 10 times, according to a police report from that date.

Dispatchers told North Adams police Guntlow seemed to be intoxicated and made “multiple threats towards law enforcement,” the police report says. Guntlow had said if officers came to her house “she would resist their efforts to enter,” the report reads.

The police report also says Guntlow had been in protective custody before, was known to be a “heavy drinker” and had a past of suicidal ideations that “added to the concern.”

Both the lawsuit and police report say Victoria Guntlow did not answer the door and police kicked it down.

The lawsuit says Guntlow “made it clear to the dispatcher that the police were not welcome in her home.” It claims that without a warrant, permission to enter, or an emergency, their entry was unlawful.

Guntlow was on the second floor of the house when police entered. Kelly and Sherman went upstairs, where Guntlow told them she needed a minute and walked toward her bedroom, both the police report and lawsuit complaint say.

She was booked at the police station. After complaining of shoulder pain, an EMS crew took her for treatment, both documents agree. Police then filed charges against her for allegedly making a false report to public safety dispatch and for disturbing the peace, according to the complaint.

A clerk magistrate at the North Adams District Court did not find probable cause she committed a crime and did not issue a complaint, according to the lawsuit. The complaint argues that police pursued charges “for the ulterior or illegitimate purpose of protecting themselves from liability for the injuries they caused.”

The lawsuit also implicates the city, claiming it failed to take action after previous allegations of excessive force and civil rights violations, citing examples such as a lawsuit filed several years ago by Ronald Thomas, who said he was beaten by police during a 2016 arrest. That lawsuit is still ongoing, according to court filings.

The North Adams police chief says a recent lawsuit "does not accurately portray the events it purports to describe." Those events? A claim that officers subjected a city resident, now deceased, to unlawful entry and excessive force.