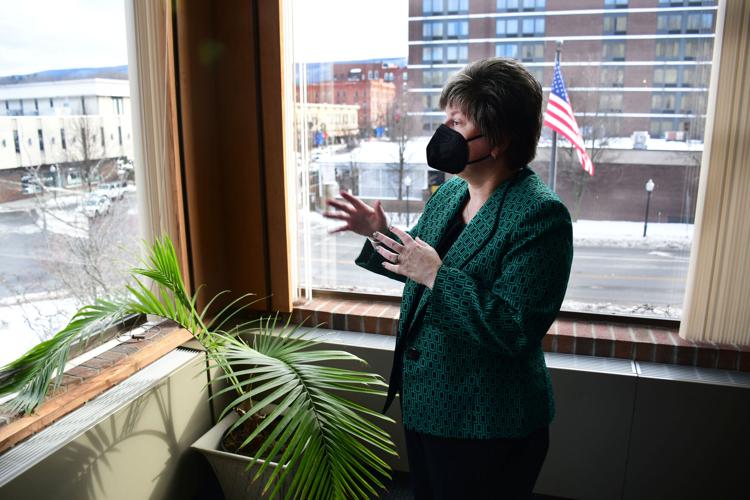 North Adams Mayor Jennifer Macksey looks out on downtown from the corner office as she reflects on the first weeks in office. 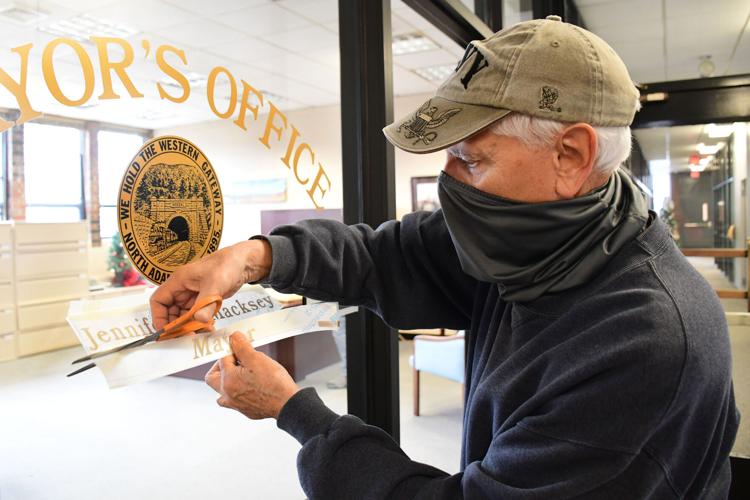 Michael Sarchi of Berkshire Signs cuts the decal before adhering it to the window as he changes the sign at the Mayor's office at City Hall in North Adams on Thursday as the new year brings new leadership to the corner office, and the city's first woman mayor. 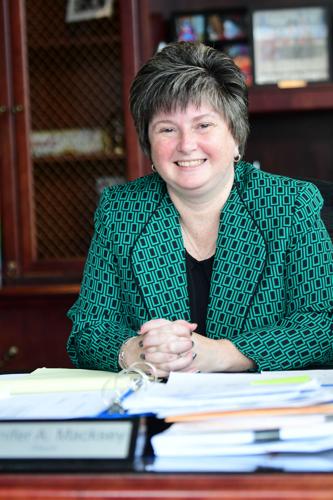 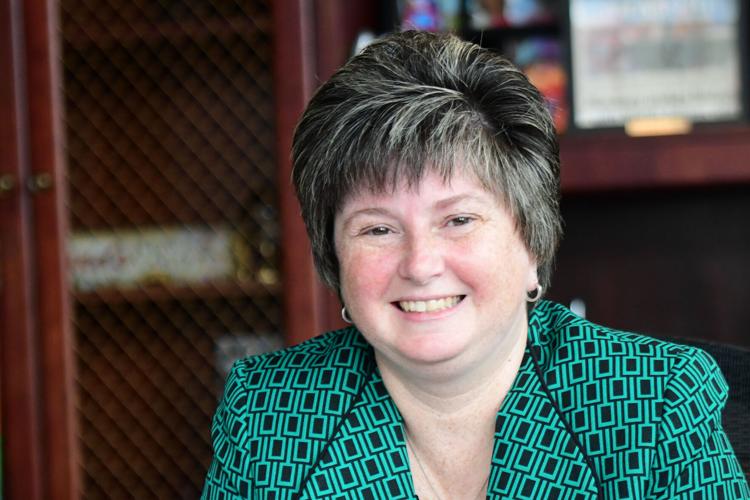 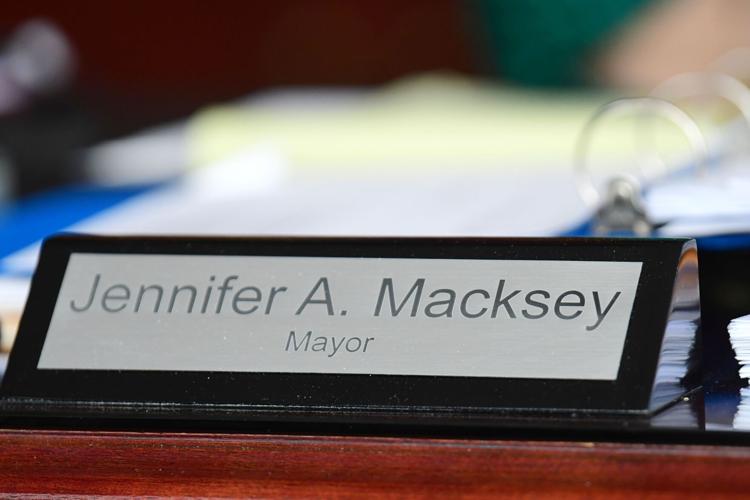 North Adams Mayor Jennifer Macksey is the first woman mayor in the city. 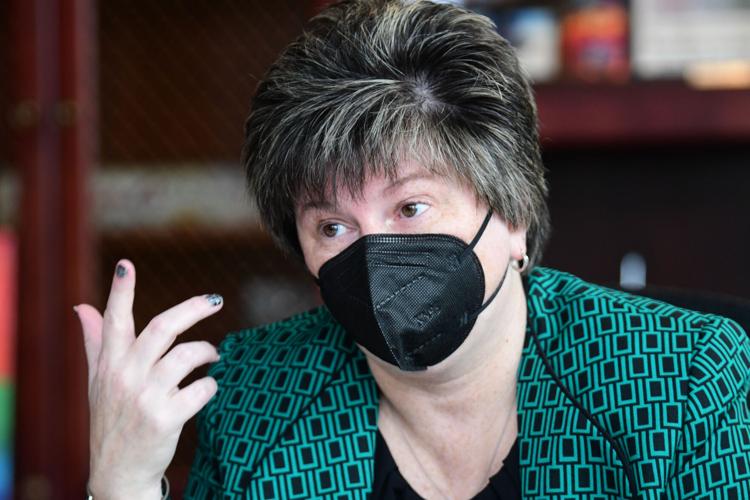 NORTH ADAMS — A snowstorm, three water main breaks, a leak in the roof at City Hall and a surge of COVID-19.

The first few weeks of Mayor Jennifer Macksey’s term have been busy and filled with some unexpected issues.

“The last three weeks, we’ve spent a lot of time managing weather, managing COVID and really talking to people about some of their concerns or fears in the community,” Macksey said. “We’ve gotten a lot of good calls. And we’ve gotten a lot of calls that we need to work on some areas. And when I talk about areas, it’s mostly around our infrastructure.”

She’s also been occupied with some more predictable issues, like figuring out how to spend American Rescue Plan Act funds and deciding what her move is on the Mohawk Theater’s pending sale.

Some of the biggest adjustments for her to the job: carrying two cellphones — a personal one and a work one — and responding to the title of “mayor.” At the grocery store, she said, people will say “mayor, mayor” and it takes her a second to realize they are talking to her.

“I’m ready for this,” she said while sitting in her corner office that overlooks Main Street on a recent morning. There is a photo of her dog, Lawson, an adopted silver lab, and a framed article behind her that reads “Macksey makes history with North Adams win” from the day after her election.

She’s picking up on projects former Mayor Tom Bernard started, like figuring out how to spend ARPA funding, which can be used for several years.

“I want this money to be spent on long-term fixes, not short-term, plugs in the boat, so to say. So most of my thought is going to be on infrastructure,” Macksey said.

“There’s a lot of infrastructure needs. They’re not the sexy kind of headline projects, but they’re important. And my focus is just we’re making a laundry list, and we’re gonna prioritize, and we’re gonna put it out there, these are our needs, these are the dollars we can assign. And then when we run out of money, we look for a next batch of money.”

City Council President Lisa Blackmer agrees that infrastructure needs, like addressing the water and sewer system and public safety building, are key in the city. “I think infrastructure is important,” she said.

Blackmer also noted that Macksey is working to fill several empty positions. “I appreciate that,” she said. “I think that’s really important.”

Future of the Mohawk Theater

Another major unresolved project: the sale of the Mohawk Theater.

Last year, Veselko Buntic, of Dowlin Building LLC, submitted the only proposal to purchase the theater for $21,000 and turn it into a multipurpose event and performance space.

After multiple meetings, the City Council decided to wait until Macksey was in office to make a decision on the sale.

In a few days, Macksey plans to make an announcement about it. “Next Tuesday at the [city] council meeting meeting, I will be giving my decision on the [request for proposal] process, the open RFP process, and talking about the future of that process.” The City Council meeting is scheduled for 7:30 p.m. Tuesday via Zoom, and information on how to join the meeting can be found on the city’s website.

On Thursday morning, she said she had plans later that day to meet with Buntic and get to know him and “to talk more about his existing properties in a positive light and his vision for his property.”

She’s also spending time looking at other city properties, like Windsor Mill and Western Gateway Heritage State Park, to evaluate what’s next for them.

One building in the park is “in desperate need of a new roof,” she said. “We need to get more businesses down there. And whether we try to do that as a city or we try to bring someone in to do that, that’s what we’re evaluating. I believe strongly if we get one good anchor down there we will draw other people. Then it goes back to the conditions of the building, there needs to be a significant investment in the park. So there’s there’s lots to follow on that.”

And of course, there’s the aging public safety building, an issue Macksey and her challenger Lynette Bond highlighted during their campaigns.

Bernard created a working group to narrow down a list of possible sites for a new public safety building with help from the Berkshire Regional Planning Commission.

“We’re waiting for a report, I believe from the Regional Planning Board, about our site review,” Macksey said. The working group has not reconvened, she said, “but we will very soon.”

What’s on her mind: “The big question is, do we move the police department somewhere temporarily?” she said. “Or, do we put some money into the building that exists? You know, I can go back and forth on either scenario right now.”

She added, “We have looked at some temporary space, we are doing some back of the envelope, negotiating, so to say,” she said. But, she added, “any money that I spend now takes away from the project.”

As Macksey takes the helm in city government, residents, too, can get involved. She is developing a list of vacant volunteer positions on city commissions, and she said there are openings on the the Inclusion, Diversity, Equity, and Access (IDEA) Working Group, Youth Commission, and Conservation Commission.

“We’ve got a lot of spots open,” she said. “Anyone who is interested in serving this community should send us an email.”

Is Mayor Jennifer Macksey running for reelection? 6 questions for the North Adams mayor

Mayor Jennifer Macksey sits down with The Eagle to go over her to-do list for the city, including fixing aging city infrastructure and addressing the city's blight issues.