WILLIAMSTOWN — Days before he faces a possible firing, a Williamstown police sergeant is again accusing the town of bias and retaliation, portraying himself as a whistleblower who received unjust treatment by local officials before and after he brought a federal lawsuit last year.

Sgt. Scott E. McGowan filed a complaint Tuesday with the Massachusetts Commission Against Discrimination. The six-page document discloses that McGowan, who has been on a paid administrative leave since March 1, would face a disciplinary hearing at 2 p.m. Thursday. 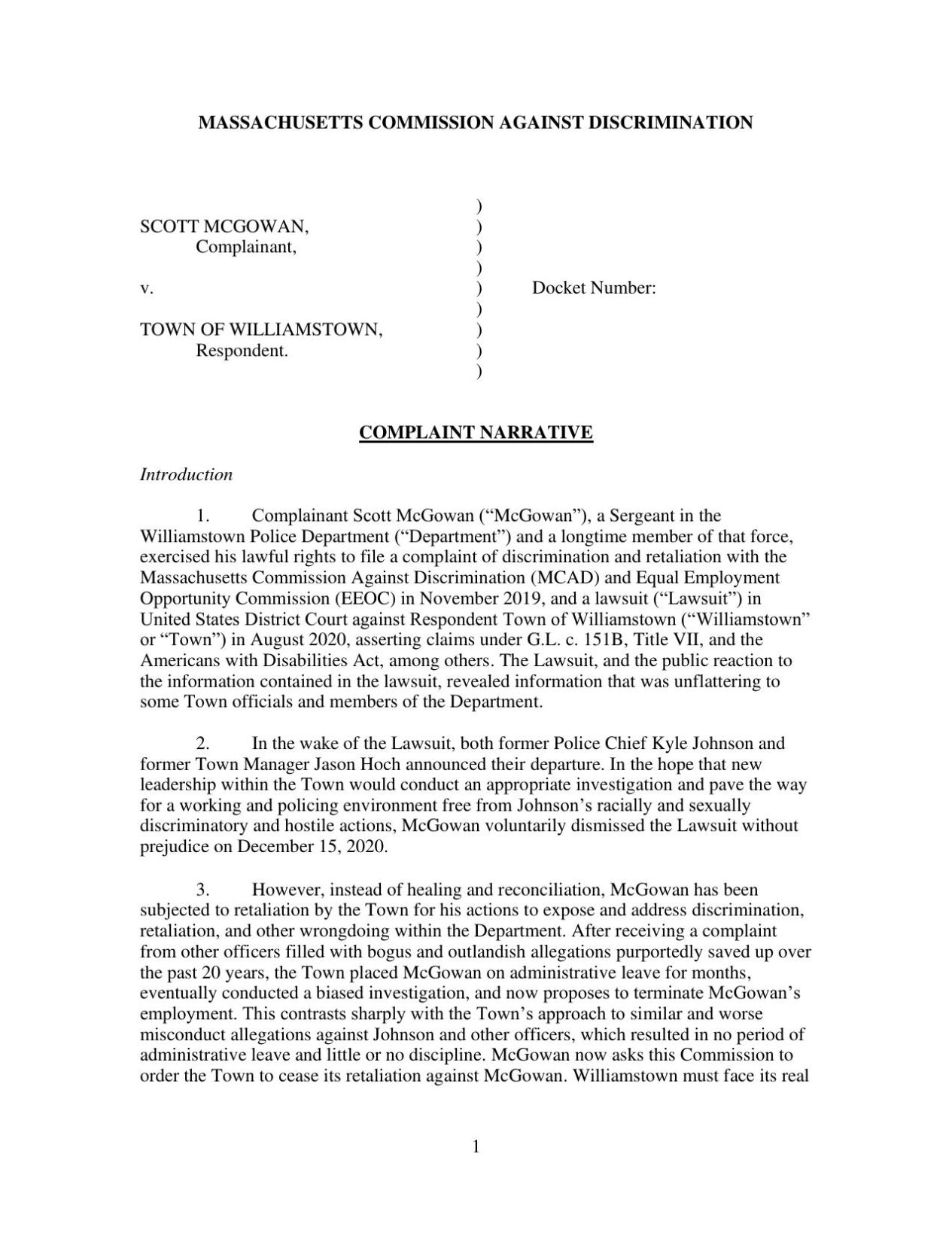 That hearing on a possible job termination, his attorney said in a statement Wednesday, “is retaliation in violation of state and federal anti-discrimination laws and the Massachusetts Whistleblower Act.”

“Williamstown must face its real issues with discrimination and retaliation, and not just respond by ‘shooting the messenger,’” the MCAD complaint says.

McGowan plans to exercise his right to have Thursday’s virtual hearing be open to the public, according to his attorney, David A. Russcol. In an email to The Eagle, Russcol said his client “intends to defend against the charges vigorously.” McGowan has been a full-time officer since 2002.

A sign of change? Williamstown protesters call for more police accountability amid allegations

WILLIAMSTOWN — "Is there anybody from the Williamstown PD that would dare to take up the mantle," Bilal Ansari asked before a crowd of protesters Friday evening, "to take up this sign and put …

Thursday’s hearing was to be the culmination of an effort by Williamstown officials to examine allegations against McGowan contained in a letter signed by all rank-and-file members of the Williamstown Police Department. The hearing is taking place on the same day that two finalists to become the town’s next manager will be meeting staff and community residents, a day before their candidate interviews Friday morning.

The MCAD complaint claims that the town’s investigation has been part of an “unfair and biased disciplinary process.”

In a statement, Russcol said the town refused to provide McGowan with “the names of witnesses, alleged victims, and relevant documents so that Sgt. McGowan can reasonably respond to the allegations against him.”

Almost two years ago, McGowan filed an earlier MCAD complaint alleging that he faced workplace discrimination. That was withdrawn before he filed a U.S. District Court lawsuit in August 2020. Both contained allegations of misconduct by former Police Chief Kyle Johnson. They also painted a picture of racial and sexual harassment within the department, leading to widespread concern among residents about the integrity of local policing.

McGowan dropped the lawsuit in December 2020 after Johnson resigned. McGowan’s allegations also led to the resignation of former Town Manager Jason Hoch, who was seen by some as failing to inform the Select Board of the earlier MCAD complaint and appearing to protect Johnson.

While police officers chose not to speak out for months about McGowan’s legal filings, they broke their silence last winter with a letter to town officials alleging that the sergeant himself engaged in some of the discriminatory conduct he decried.

EAGLE INVESTIGATIONS: Williamstown police officers say Sgt. Scott E. McGowan accused others of conduct he exhibited himself, including open and frequent use of an anti-Black epithet, as well as displays of sexual and racial harassment.

Williamstown sergeant linked to assault on student, falsification of records

The complaint from officers alleged that McGowan bullied and verbally harassed co-workers, creating a hostile environment that left them reluctant to work with him. It said officers did not have confidence in McGowan’s ability to perform his assigned work. “Since McGowan was made a Sergeant,” it says, “his abuse of power, narcissistic attitude toward fellow officers, and his bullying are more than any employee should have to endure,” the complaint said. “McGowan stated in his (lawsuit) that he wants to make this a better Police Department. … In our unanimous opinion, Scott McGowan shouldn’t even be a police officer, let alone a sergeant.”

McGowan’s new complaint contends that the letter from officers contains “bogus and outlandish allegations” and that it is a form of retaliation against McGowan. It goes on to disclose that McGowan was the party who exposed improper use by some Williamstown officers of the state’s Criminal Justice Information Service. “McGowan opposed this activity and caused it to be brought to the attention of Acting Chief Michael Ziemba and District Attorney Andrea Harrington,” the complaint says.

The new MCAD claims that McGowan dropped the federal lawsuit “in the hope that new leadership within the Town would conduct an appropriate investigation.”

“However, instead of healing and reconciliation, McGowan has been subjected to retaliation by the Town for his actions to expose and address discrimination, retaliation and other wrongdoing within the Department,” the MCAD complaint says.

It seeks damages based on what it terms the town’s “unlawful acts” and says McGowan “suffered and continues to suffer lost wages and benefits, reduced future career opportunities, reputational harm, and other damages.”

By putting McGowan on paid leave in March from his $76,000-a-year job, the complaint says, the town acted disproportionately compared to other employees. It faults the town for not informing him about the reason for his leave.

The complaint says McGowan learned Oct. 6 that he faced a disciplinary hearing “to consider whether or not [McGowan] should be terminated ….”

The filing argues that McGowan should have been provided with more information earlier, noting that while the town received the results of two inquiries into the sergeant’s conduct in August, he only received a “heavily redacted” copies of those reports last Friday. “This delay was intended to deprive McGowan of the ability to present a full and fair defense at the hearing,” the MCAD filing says.

The investigation into McGowan’s conduct was led by two outside investigators, Judy A. Levenson and Paul L’Italien. The reports cost the town about $58,000. Blanchard later hired Worcester attorney Demitrios M. Moschos as a special investigator. Blanchard said in an interview last month that he asked Moschos to determine whether enough evidence has been compiled to fire McGowan.

As of Wednesday, the town had not yet provided information on how the public can gain access to Thursday’s disciplinary hearing. The Eagle will post information when it becomes available on how to watch the proceedings.