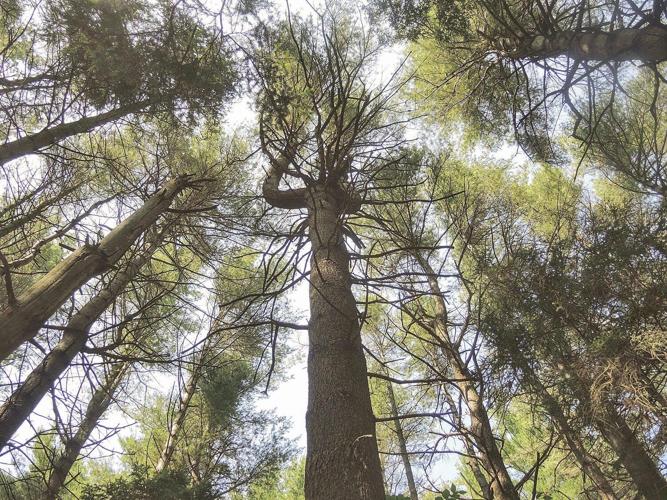 Two Williams College seniors are helping shape plans for a "forestry center" that is a required element of the Mohawk Trail Woodlands Partnership. The students, Abby Matheny and Sabrine Brismeur, are consulting with the partnership's executive committee. The partnership was created to help rural communities make use of their extensive forested lands, most of which are privately owned. But, the state is a big landowner as well, including this section of the Florida State Forest. 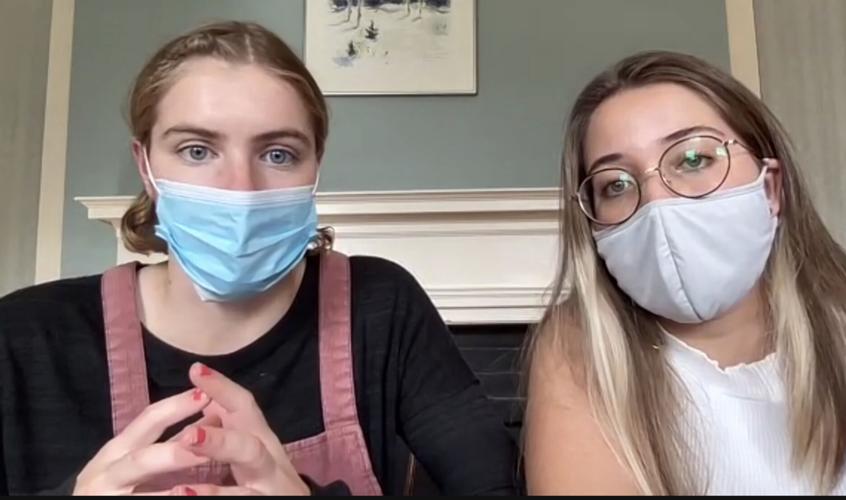 Abby Matheny, left, and Sabrine Brismeur, both Williams College seniors, are advising the executive committee of the Mohawk Trail Woodlands Partnership on how to define the mission of a planned forestry center. The students are working with Sarah Gardner through a course called the Environmental Planning Workshop.

WILLIAMSTOWN — In late October, a pair of Williams College students hit the streets to explore possible sites in northwest Massachusetts for a "forest center." Before heading out, they road-tested their ideas with the group that tapped them as consultants.

Three years ago, state legislation launched the Mohawk Trail Woodlands Partnership to help rural communities find ways to both preserve, and take advantage of, their forests. The idea had its opponents, who feared that the region's dense woods might be opened to larger-scale logging, reducing the ability to sequester carbon.

The project gained ground in June 2019, when 11 of 21 communities opted to join the partnership.

Henry Art, of Williamstown, chair of the partnership’s executive committee, says that while the legislation called for a physical center to be built, the group is working to define not only where it should be located, but what it should offer.

Enter Abby Matheny and Sabrine Brismeur, two seniors at Williams. This fall semester, they are working with Sarah Gardner, who teaches the college’s Environmental Planning Workshop, to help the partnership flesh out a concept for the center.

In late October, they briefed the partnership board’s executive committee on a survey that was to be sent to people across northern Berkshire County and western Franklin County — the partnership’s terrain.

During an hourlong discussion via Zoom, the students took suggestions from committee members on ways to strengthen the Google Forms survey they planned to distribute.

“This is still very much a rough draft,” said Matheny, who is from Pittsburgh. “We still have a lot of work to do — we know that."

The survey asks respondents to comment on eight proposed uses of a forest center. Matheny and Brismeur list several possible aspects of such a place and ask people to rank them from most important to unimportant.

Funding to build a forestry center is not yet in place. Officials said at the panel’s September meeting they intend to use the Williams College report to better define the project, borrowing from the document to guide future grant applications. Apart from the cost of the center, it also isn’t known how it would be staffed, officials concede.

Though Massachusetts has no national forest, the federal agency plants its flag here Thursday. In an agreement to be signed at the Berkshire East ski area in Charlemont, the chief of the U.S. Forest …

The initial proposed elements of a center are:

• An information or booking center for regional tourism and economic development.

• A demonstration forest and woodworking center that showcases the production of local wood products.

• A public education center and field trip destination with exhibits on the region’s history, culture, landscape and indigenous peoples.

• A year-round retail shop and monthly marketplace that would feature regional products and services.

• A headquarters for the partnership and public meeting place.

“These are our envisioned uses,” said Brismeur, of Fort Lauderdale, Fla. “There may be more that you think of. We have a lot of ideas, and doing all of it is not likely feasible.”

“At this point we don’t have any logistics ironed out,” she said. “That’s going to be a goal as we narrow it down.”

Committee members urged the students to look at how other regions in the country run their visitors’ centers.

Mark Buccowich, who represents the U.S. Forest Service on the committee, suggested that the project pin down the best available knowledge on what makes a visitors’ center succeed.

“Do we know what the public wants and what they would respond to?” he asked.

Member Whit Sanford advised Matheny and Brismeur not to be tripped up by the political divisions of two different counties. “We are many people — and one place,” she said.

Matheny and Brismeur planned to drive through the region to get a feel for center uses and locations. They plan to wrap up their survey and report on its findings by December.

Andrew Kawczak, a board member representing the Hoosic River Watershed Association, said he felt that the survey the students described hits the right notes.

“I think you’re on board and on target,” he said. “It’s not too ‘blue sky.’ It’s right on, and we can filter it going forward.”

The partnership’s executive committee next meets at 2 p.m. Dec. 14.