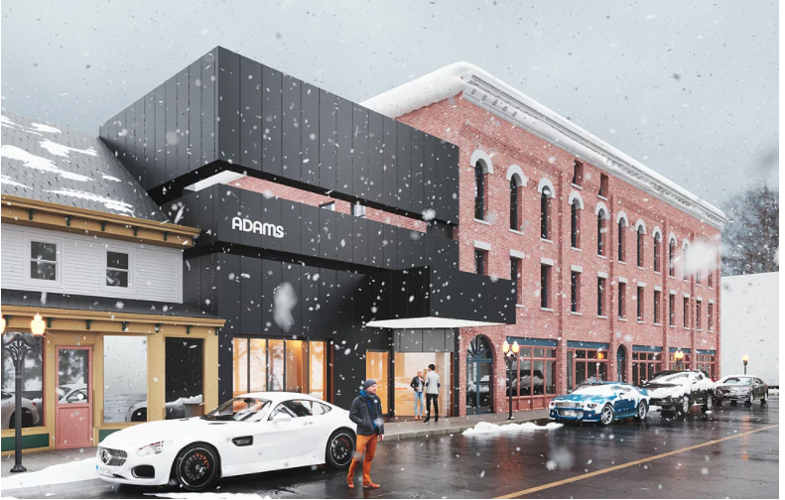 This illustration by Wilson Harkhono shows a proposed redesign of the former Topia Arts Center at 27 Park St. in Adams. The long-shuttered building was sold last week to the Adams Theater LLC, which plans three to six months of renovation before reopening. 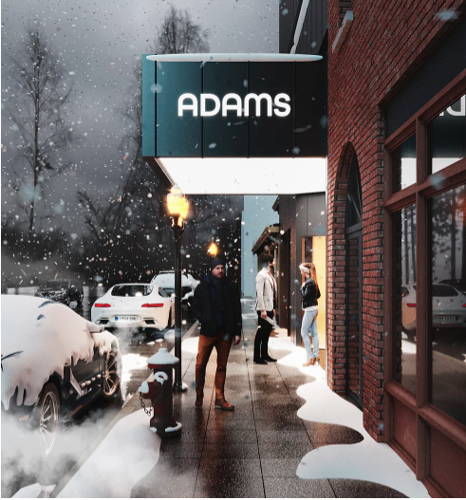 ADAMS — For more than a decade, the two artists who saved an Adams theater from foreclosure invested money, won grants and tried to make the numbers work for their Topia Arts Center.

Today, the dream of shaping a vibrant downtown performing arts center goes by the name Adams Theater LLC, which bought the 27 Park St. property last week for $189,00, less than half its original asking price.

Yina Moore, its founder and executive director, plans to spend three to six months renovating, with bold streetfront changes meant to give the theater greater visibility and win back a public following. Moore links her vision with what Marianna Simopoulos and Caryn Heilman attempted to create with Topia.

“We have some very similar things that we wanted,” she said Tuesday. “They kind of passed the baton to me. I felt I might be able to push it forward.”

While much of the early work will be unglamorous, designs that Moore has posted online show a dramatic new look, with several versions of a restored facade. The 2,000-square-foot cafe space, formerly leased as a Subway outlet, will be opened up by removing a wall that divides it from the theater’s entrance next door.

“There will be a lot more street presence,” said Moore, an architect who splits her time between North Adams and New York City.

Deeper inside, the theater’s 8,000-square-foot auditorium, which dates to 1937, will be insulated and get a new heating and ventilation system and a new interior look. The work will add public bathrooms as well.

With that construction work ahead, Moore has been getting in touch with local arts groups, scouting for collaborators. She’d like the theater to step back up to the role it once played in civic life, when the building rose to replace the former Atlas Theater, which burned.

“This vaudeville and movie theater has played a vital role in connecting generations of local residents,” the project states on its website, “and will continue to energize the public life of Adams and Berkshire County.”

Moore says the new theater’s programming will be shaped by musicians and performing artists and become “a creative hub for innovative thinkers.”

She plans to host workshops, community events and pledges to have the theater’s events be affordable. “It focuses relentlessly on accessibility to all demographics,” the plans say. “Adams Theater celebrates rehearsals as much as performances.”

“Adams Theater is a public place where tradition inspires [the] future,” one post says. “It will provide a new stage for artists and cultural entrepreneurs to collaborate and build a thriving community in Berkshire County.”

That echoes goals outlined more than a decade ago by Topia’s owners, Simopoulos and Heilman. Their quest to create a 700-seat theater and cultural center got one of its first public airings in late 2004, when a member of the town’s Select Board saluted their “imagination.”

In a 2018 interview with The Eagle, Simopoulos said she believed the idea of a multi-function performance space remained viable, despite the setbacks she and her partner encountered, after laying out roughly $300,000 for the property and investing another $125,000 in the cafe space. They managed to present some performances, but they didn’t continue.

“We hope to find someone who can take this project to the next level,” Simopoulos said at the time. “Hopefully, a person or group of people who can see the potential a theater has to make a difference in the quality of life for the people of Adams as well as the Berkshires as a whole.”

With help from the town’s community development department, Topia Arts LLC secured over $300,000 in grants and was aided by a volunteer board.

Moore declined to specify how much she plans to invest in renovations. The company is not so far seeking nonprofit status. Before going to architecture school, Moore worked in finance in New York. “Being able to write a business plan and run a spreadsheet to put in front of people is really helpful,” she said.

Moore says she came to the Berkshires 20 months ago to work as an architect on Thomas Krens’ proposed Extreme Model Railroad and Contemporary Architecture Museum. For a spell during the pandemic, Moore and her husband and two children, along with her parents, spent time in North Adams.

She noticed that her family was hardly alone in taking up residence in the region during the pandemic. “I thought we can put down some roots here, and do something more sustained,” she said.

As if rejuvenating a live entertainment theater venue isn’t enough, Yina Moore leased storefront space a couple doors down from her Adams Theater project to open a small business incubator space at 35 Park Street. It will double as a community gathering space and a pop-up gallery. Other uses could include co-working space, art retail shop, small event venue, and a place to stop in and socialize over coffee, Moore said.