NORTH ADAMS — Plans are rolling forward to create a bike path that would go through North Adams, creating a connection from Wiliamstown to Pittsfield.

A recently released draft of a feasibility study from the Massachusetts Department of Transportation outlines three potential routes that an approximately 2-mile stretch of path could could take in North Adams, from Protection Avenue to the Massachusetts Museum of Contemporary Art.

“Everybody wants this to happen,” said Pete Sutton, bicycle and pedestrian coordinator for MassDOT. “We’re trying to work out the preliminary designs and select which alternative we want to go with.”

He added: “This is the area of the state that’s been long overlooked.”

The path, he said, is “an idea whose time has come.”

The 2-mile section of the proposed bike path project — it’s referred to as the North Adams Adventure Trail — would be an investment: The potential routes’ cost estimates range from $13 million to $19 million, and those MassDOT figures do not include the cost of acquiring property for the trail.

The section of trail is part of a larger vision to create a nearly 30-mile path.

“Ultimately, the grand scheme is to connect Williamstown to Adams through North Adams and, by extension, Pittsfield — a bicycle highway, so to speak,” said Zachary Feury, project coordinator in North Adams’ Office of Community Development. 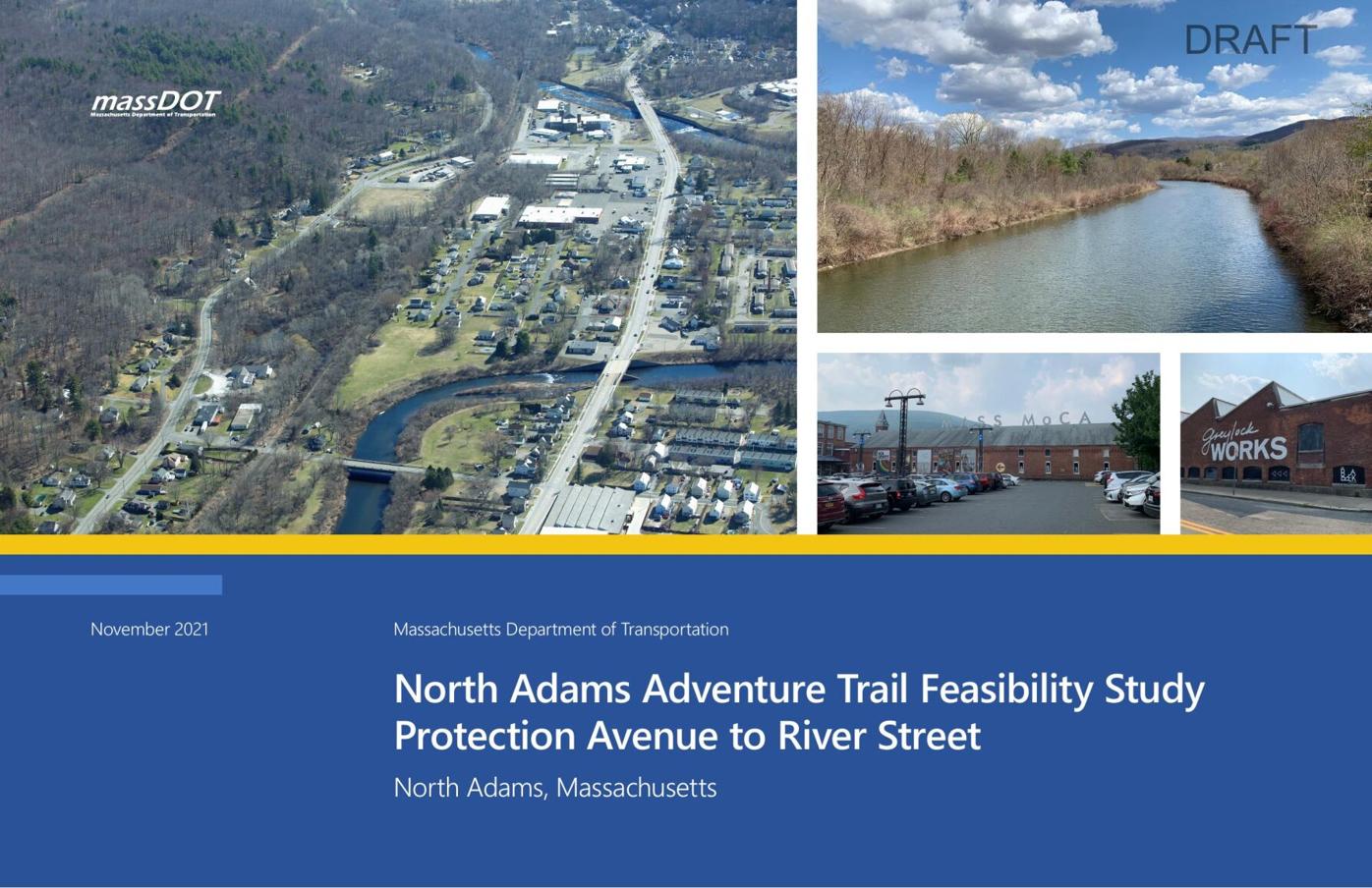 The corridor between North Adams and Williamstown has been deemed a “high priority for the Commonwealth’s trail and greenway system in numerous initiatives and statewide planning documents,” the recent MassDOT feasibility study says. Construction on a 2.4-mile bike path in Williamstown is ongoing.

In planning an approximately 1-mile section of the path from the Williamstown border to Protection Avenue, the city is talking to Tourists, which owns much of the land, Feury said. The city received a grant from MassTrails to start designing that stretch of trail.

Map of the proposed bike path between Williamstown and North Adams

The feasibility study looks at the next section of the proposed trail connecting Protection Avenue to Mass MoCA. It outlines three possible routes: one mostly would follow an active freight rail line; another would follow Route 2; and the third would follow the south bank of the Hoosic River.

A copy of the feasibility study can be found on the MassDOT website, and feedback can be sent until Jan. 8 to peter.sutton@state.ma.us. After comments are received, they will be taken into consideration and the study will be finalized, Sutton said.

Feury hopes the public weighs in.

“That’s really what we’re hoping to get, to get people to actually take a look at the study, consider the study and the various alignments, and provide their honest thoughts on them,” he said.

The cost estimates seem high for about 2 miles of trail, but it’s a complex project, Sutton said.

“All of the easy pieces of trail in the state have been built. We’re just left with the really complex, really difficult, really challenging, really expensive sections like this in North Adams,” he said, adding that the routes could involve environmental issues along the river and intensive engineering, like the design of a new bridge.

“I think, ultimately, this section that we did the feasibility study on will become a MassDOT project because of the high price tag,” Sutton said.

“If funding is in place and everything moves along, typically [it takes] five to seven years before you can get to construction,” Feury said. “That’s because of the design and engineering process that’s required. It has a lot of review. They are not simple projects. They can seem simple, but they are actually very complicated and pretty difficult, especially when you’re doing a truly off-road path.”

Eventually, the vision also is to build a path to connect to the Ashuwillticook Rail Trail in Adams.

“The focus right now is on the Williamstown-to-North Adams connection,” Feury said. “Going south would come after, due to time and resources.”

With winter weather settling into the Northern Berkshires, work on the new hike/bike path has stopped, except for construction of the pedestrian bridge over the Green River to connect the western part of the path to The Spruces area.

Mohawk Trail multiuse path in Williamstown ready for use, will formally open this fall

Tune up those bikes, lace up those walking shoes: the Mohawk Trail multiuse path is open and ready for hikers and bikers on the newly paved 2.4-mile stretch.