NORTH ADAMS— A plan to address accessibility issues at the city’s police and fire department building is more than two years overdue to the state’s Architectural Access Board.

In November, the Architectural Access Board, which enforces accessibility laws in public buildings, fined the city $8,150 and ordered it to submit a bond of $10,000 that would be returned when it submitted temporary remediation plans for the building and a plan for an accessible public bathroom. 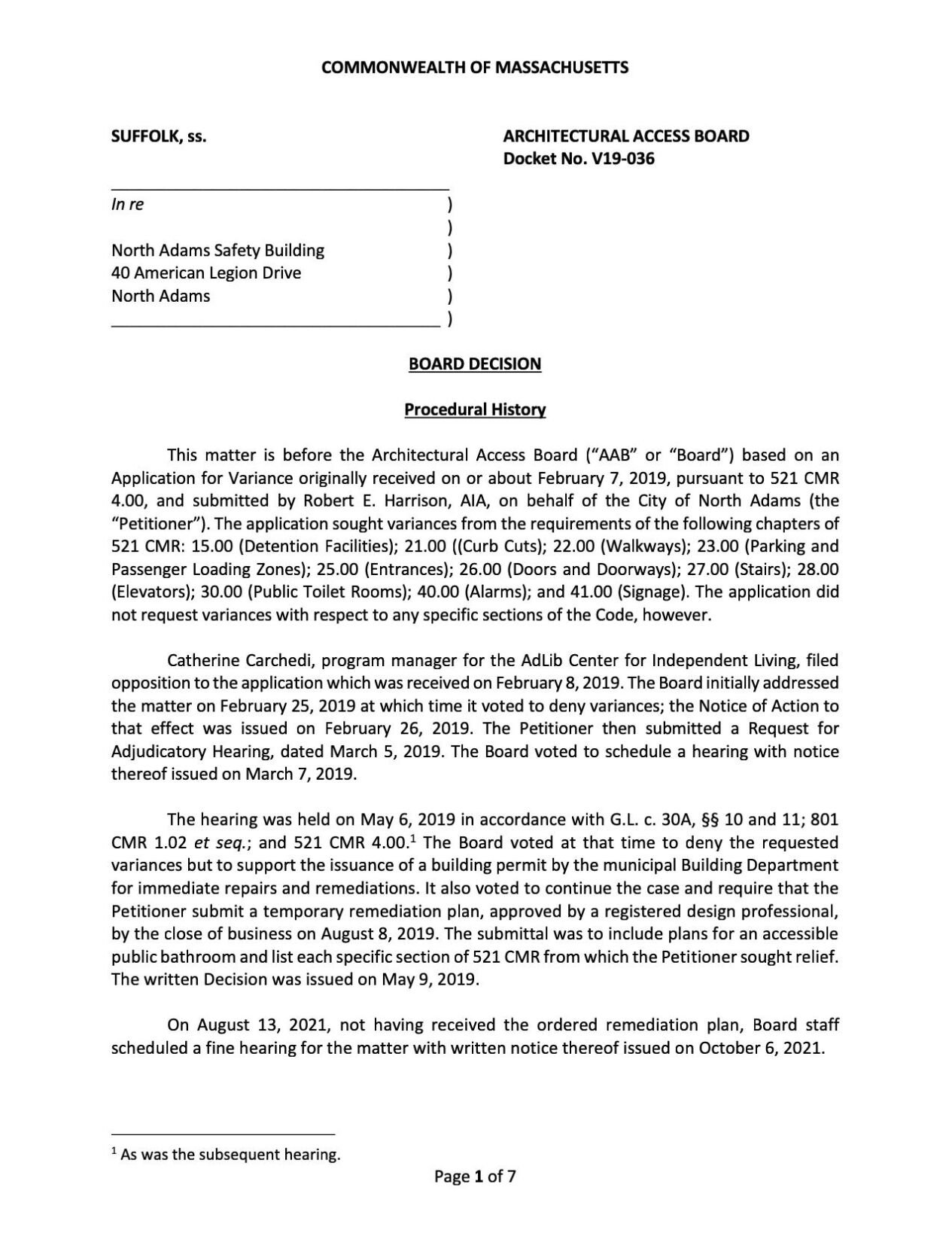 “I was not aware of the assessment,” said Macksey, who was not in office when the order was issued. “It was just dropped on my desk a little while ago.”

The fine was also not submitted, a board spokesperson said, and the board is sending an enforcement letter to the city and if the city does not reply, it will likely be called to another hearing.

In 2019, the public safety building’s roof was leaking and buckets caught rain in a firefighter’s bunkroom. The cost to fix the roof was more than 30 percent of the building’s value, triggering a requirement to make the building accessible.

The Architectural Access Board allowed the city to go ahead with the roof repair and forgo the accessibility requirements, on the condition that the city submitted a temporary remediation plan a few months later, according to the board’s November order. That plan was never submitted, and the city was called before the board again in November 2021 for a fine hearing.

The fine could have been much higher, up to $1,000 per day for more than two years — which amounts to $8.9 million. But the board decided in November that would be unreasonable and imposed the much less expensive fee of $8,150 and ordered the city to submit the $10,000 bond until it created the temporary remediation plan.

The aging and inaccessible public safety building has long been an issue in North Adams.

The city has results from a study that examined several possible sites for a new building, Macksey told the council Tuesday, but state funding has not arrived.

In 2018, $1.2 million was authorized to put toward engineering, design and siting of a public safety facility in a state bill that includes, in total, about $3.9 billion for projects around the state. But funding for North Adams has not been released.

Macksey said she is working with the city’s lawyer to devise a solution “which may include moving, temporarily, the police department.”

The million-dollar question: Where to get millions for a new public safety building?

EAGLE INVESTIGATIONS: While a state program helps cities and towns pay for new school buildings, no such program exists to help communities build police and fire stations. It’s not at all clear how North Adams would pay for a new public safety building estimated to cost more than $10 million.

EAGLE INVESTIGATIONS: Fixing the public safety building was a common refrain during the campaign for mayor. We take a close look at problems in the building.