NORTH ADAMS — The city clerk will be leaving her post in mid-February.

“I have appreciated the opportunity to serve the City Council and the City of North Adams for the past year,” City Clerk Cathleen King wrote in her resignation letter to the council. 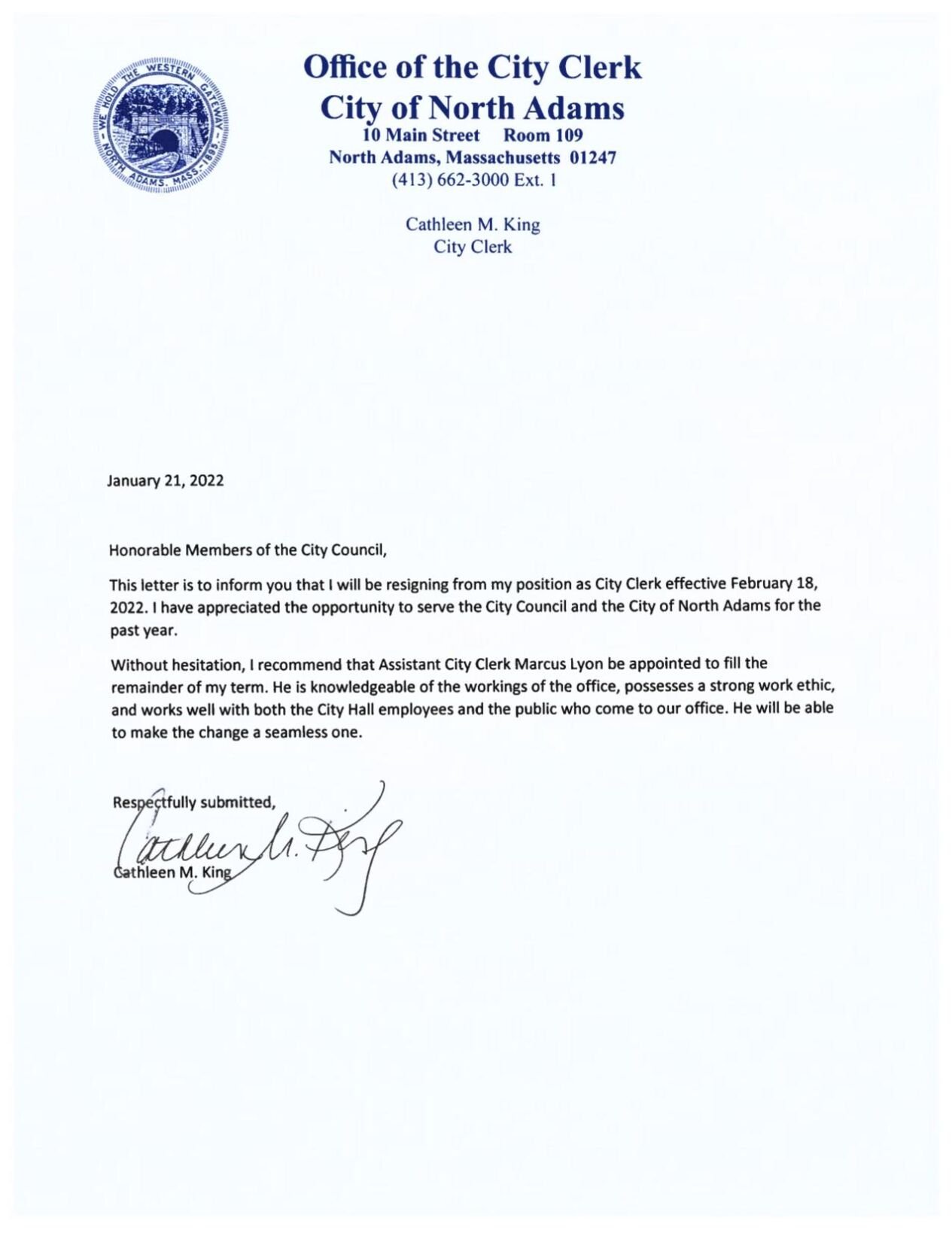 “Technically, we have to vote on this, which is ridiculous, because I would vote no,” City Council President Lisa Blackmer said at the council’s virtual meeting Tuesday night. “But I don’t have a choice in the matter.”

A number of councilors praised King’s work. “In the last year since you’ve been here, I just have seen nothing but a phenomenal job,” Councilor Peter Oleskiewicz said. “You came in and jumped right into an election.”

King, a former North Adams teacher, has been in her position for about a year. She told councilors Tuesday that she was taking a job at 1Berkshire to work in marketing. “I get to be a little more creative,” she said of the new position. “I get to work from home mostly. And I get to promote the whole of Berkshire County in the process, and I’m very excited for that opportunity.”

Councilor Wayne Wilkinson told the council he has spoken with King about her reasons for leaving, and suggested that there was more to her departure than just a new job.

“Hopefully those reasons will come out in the long run because I think it needs to be made public,” he said, without elaborating.

When asked Wednesday about her departure, King reiterated the reasons she cited in the City Council meeting. “I found a job that better suits my lifestyle,” she said.

“He is knowledgeable of the workings of the office,” King wrote in her letter to the council, “possesses a strong work ethic, and works well with both the City Hall employees and the public who come to our office. He will be able to make the change a seamless one.”

The city will look for a new permanent replacement for King.

“I think Marcus has done a great job, but basically in all fairness and transparency, we will post the position,” Blackmer said. The city will also post an opening for an assistant city clerk position, Blackmer added, in the event Lyon is chosen to lead the office. Blackmer said she will be convening a search committee to review candidates who apply.

“Hopefully we will have somebody in place ... by the end of February,” she said.

This story has been updated to correct the spelling of Marcus Lyon’s last name.

Assistant City Clerk Marcus Lyon officially was appointed as North Adams' city clerk by the City Council on Wednesday evening. He will be sworn in Friday afternoon