At its meeting Tuesday night, the City Council discussed a new proposal to regulate short-term rentals, like Airbnbs. The ordinance will next go to a joint public hearing held by both City Council and Planning Board. 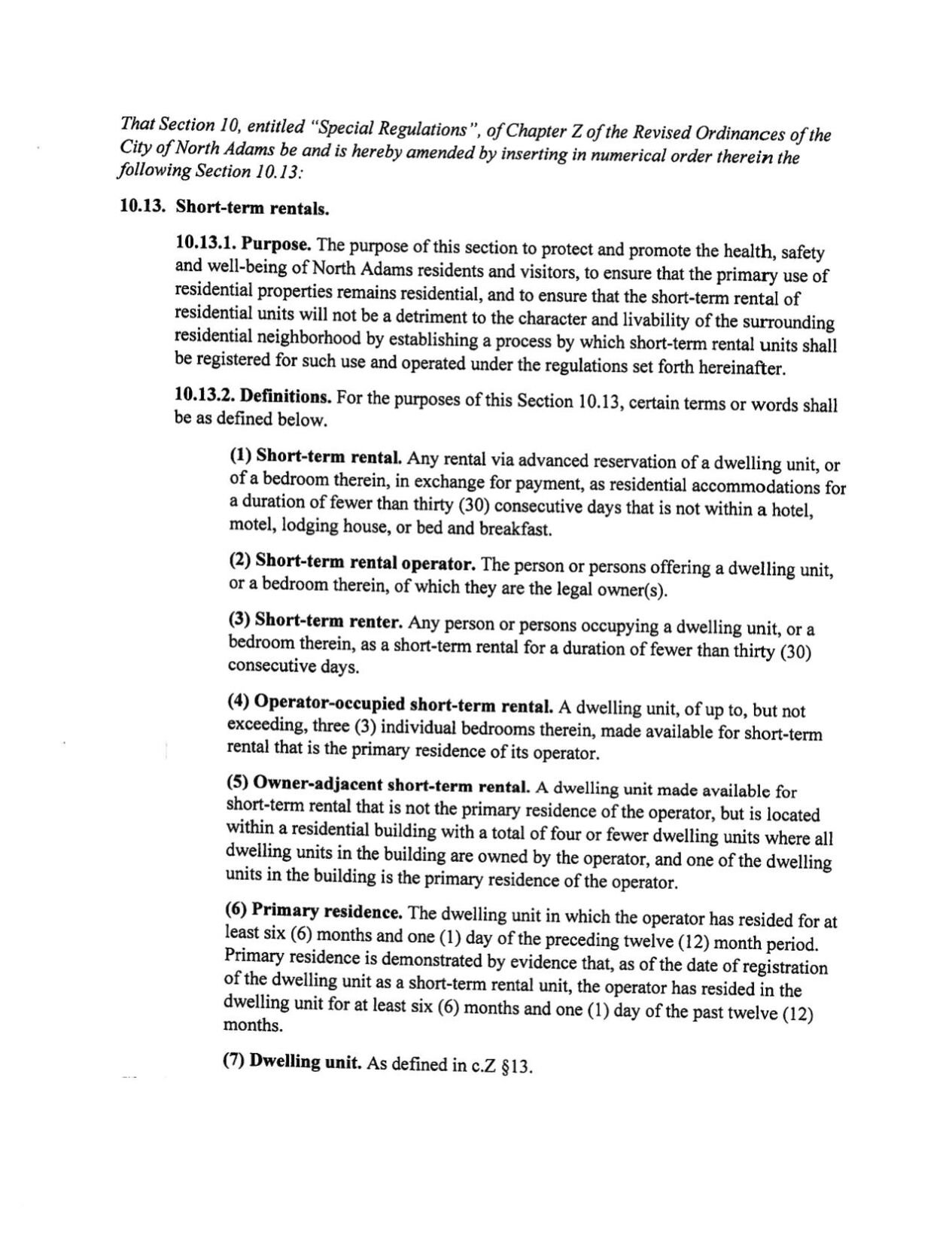 The idea is not new. Earlier this year, the council discussed a proposed ordinance that required short-term rentals to be inspected, register with the city, and meet state building code.

Currently, there are 105 short-term rentals registered in the city, according to a state database. After multiple meetings and public input on the proposal, the council decided to send it back to the mayor’s office for editing.

The public weighed in Monday on a proposed short-term rental ordinance in North Adams, and they had questions.

An ad-hoc group including Mayor Jennifer Macksey, the city’s building inspector, Bill Meranti, and Wilkinson worked on the new proposal that was presented to the council on Tuesday.

The seven-page proposal requires all units to register with the city and be inspected annually. It also would require postings in the unit including emergency exit diagrams, first responder contact information, rules about on-street parking, and, if the unit is professionally managed, the manager’s contact information.

Units also must be operator-occupied, professionally managed, or owner-adjacent. Owners who don’t live in or adjacent to their short-term rental must have a professional manager.

Properties must also meet the state building code, and the proposed ordinance outlines which part of the code different types of units must meet depending on factors like if the owner lives in the property and the type and size of the building. It also lays out where different types of short-term rentals are allowed by right in different zones of the city.

City officials have cited safety as a concern that motivated creating short-term rental rules. Long-term rental units are inspected before tenants move in, but short-term ones are not — a gap the ordinance would close.

“Up until this point we haven’t had a mechanism to do these inspections,” Macksey said. “I’m more concerned about safety. Safety and accountability in these houses to make sure they are up to code.”

The new proposal is a major improvement, Councilor Ashley Shade said, but it is not perfect. It is hard to find a rental, she said, and the conversion of homes into short-term rentals does not help.

“We might not have a growing population,” Shade said, “but we do have a severe shortage of available housing units in the city.”

There is more work to be done on short-term rentals, Wilkinson said.

“We need to have a place to start,” he said. “We have to put something on the books.”

Council President Lisa Blackmer was frustrated the ad-hoc committee didn’t include any people who own the rentals.

“You all sitting at the table didn’t include anyone who was impacted by this,” she said.

But Meranti noted the group used input from numerous previous city meetings. “It hasn’t been done in a vacuum,” he said.

The public will be able to weigh in at an upcoming hearing, but the specific date is not yet set.

The hearing should not have a time limit, Councilor Marie Harpin said. “I want everyone to be able to voice their concerns on the issue.”

Greta Jochem can be reached at gjochem@berkshireeagle.com.

A public hearing starts at 5 p.m. Monday. The seven-page proposal under review is an updated version of a draft the City Council debated earlier this year, then sent to the mayor's office for review and revision.