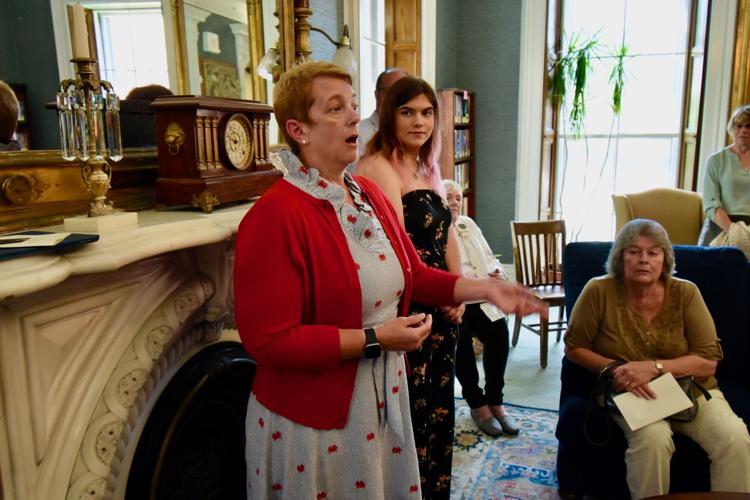 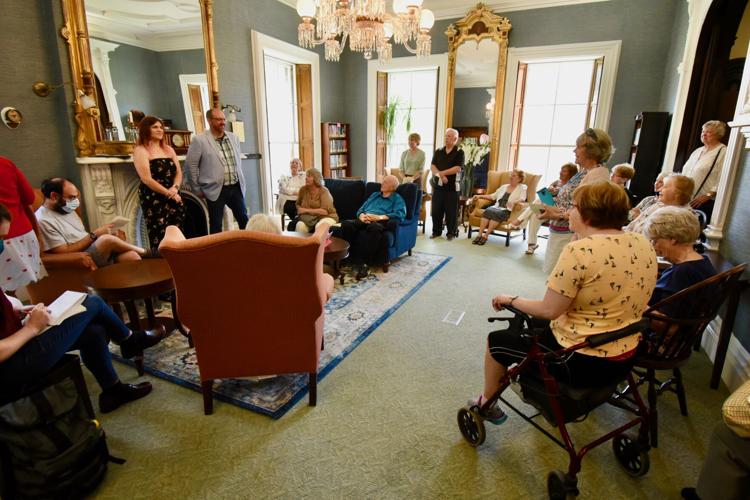 A great-granddaughter of Evelyn Gooch, Blake Meyer, and Gooch's grandson, Christopher Blake, speak of Gooch's dedication to the North Adams Public Library. Gooch made a posthumous donation to help renovate the reading room. It has been renamed the Evelyn M. Gooch Reading Parlor. 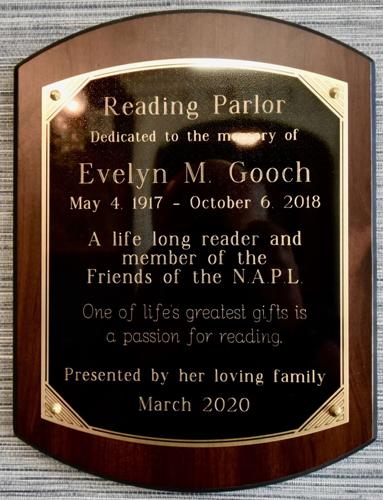 This plaque was unveiled Friday in honor of Evelyn Gooch, a benefactor of the North Adams Public Library. The dedication of a space in the library as a tribute to Gooch was delayed by the pandemic.

While growing up in the city, she and her sisters would go to the library to get books for themselves and their mom. “It was our job to look at the card in the back of the book, to see if her number was there, to see if she had read it or not. ‘X2820.’ That number is ingrained in my memory,” Blake said.

Now, the library has a permanent remembrance of Blake’s mother, Evelyn M. Gooch. After Gooch died at 101 in 2018, her family donated $10,000 in her honor to renovate the library’s reading parlor, putting in new wallpaper, adding furniture and repairing the ceiling, Blake said. The room has armchairs and a couch facing a mantle with a sparkling chandelier and bookshelves lining the wall.

“The library and the city have always been important to mom. She saw the two as complementing one another — a vibrant library promotes a vibrant city,” Blake said Friday afternoon, when a group gathered to dedicate the room to Gooch with a plaque. The event had long been postponed because of the pandemic.

Gooch graduated from Drury High School in 1934, retired from Sprague Electric when it closed and then volunteered with the Friends of the North Adams Library, her family said.

Several generations of Gooch’s family remember her as a book lover who nurtured the habit of reading in her children and grandchildren.

For years, Gooch was part of a club that mailed her books monthly, said Jennifer Blake, Gooch’s granddaughter. “I think the only reason why we convinced her to be able to cancel the club was she ran out of bookshelves.”

“That was my library as a kid. ... From that, I became a voracious reader on a regular basis,” she said.

When Gooch’s great-granddaughter Blake Meyer, was in fourth grade, she started reading the Harry Potter series, bringing them everywhere — to school, the store, restaurants, but not to her great-grandmother’s house.

“I’d walk in and right next to her seat, in front of the chair, was the pile of the seven books,” Meyer said. “At the time when I was reading this book, she was 95 years old and those 86 years between us vanished. And we would have conversations over characters (and) what Hogwarts house we thought we were in.”

The library is also getting a boost to its funding from the city budget in the fiscal year that starts in July.

To receive aid from the Massachusetts Board of Library Commissioners, a municipality needs to allocate at least 2.5 percent more money than it has on average over the prior three years. In previous years, North Adams has gotten a waiver from the state on the requirement because the city didn’t give the library enough funding, Mayor Jennifer Macksey said.

But in the new fiscal year, the city upped its allocation by about $9,000 so it would not have to request a waiver.

“We decided we needed to face the reality and properly fund the library,” she told the City Council earlier this month.