NORTH ADAMS — A ordinance passed in 1943 set a curfew for anyone under 16 in the city. That local rule remained on the books until Tuesday night, when the City Council took a second and final vote to strike the rule from the city’s ordinances.

Under the now-deleted rule, young people were not allowed on city streets between 10 p.m. and 6 a.m. — unless they were working, with a guardian, or doing an errand for a guardian.

North Adams still has a curfew for minors under the age of 16. A new city councilor hopes to repeal it

The rule was silly, a 14-year-old said this week, standing outside the Roots Teen Center. “Kids should have the freedom to walk around any time they want,” said the teen, who is not being identified at request of their parent. “It’s really not fair at all. It’s not like we’re going to do anything.”

She was happy the council made the change. 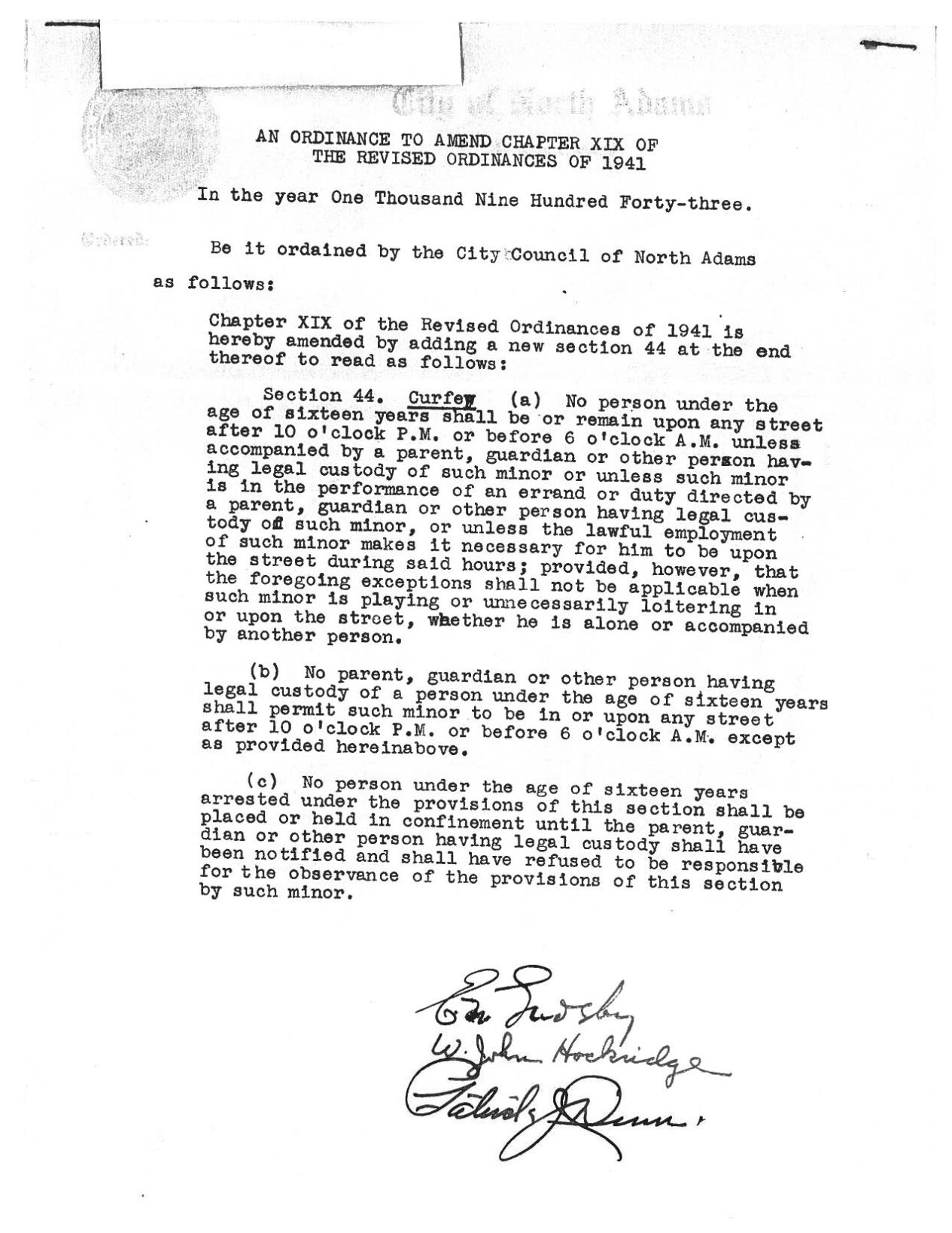 City Councilor Ashley Shade proposed the change in January, saying the ordinance was “antiquated” and unenforceable. “It should never be against the law for any human being to walk down a street or exist outside,” Shade wrote in a letter to the council this year.

In 1995, a city councilor tried and failed to repeal the rule.

In 2010, it was changed from a criminal to civil offense, according to documentation from the City Clerk’s office.

Police Chief Jason Wood has said his department didn’t enforce the rule. “I can’t remember that last time we used that,” he told The Eagle earlier this year.

Under the ordinance, youth could not actually be held in custody by police, unless their parent or guardian was contacted and did not take responsibility for them.

The ordinance was introduced in 1943 by then-Police Chief Michael Conlon. “The purpose of this ordinance is to protect children and to avoid arresting them,” according to a 1943 article in The Eagle. Conlon told the City Council at the time that it was “not unusual to find children on public streets late at night.”

Though curfew laws are “not necessarily deemed discriminatory,” they could violate someone’s civil rights, KP Law, the firm that advises North Adams, wrote in an opinion to Councilor Bryan Sapienza, chair of the Public Safety Committee.

“It is possible that someone could claim and prove a civil rights violation if enforcement deviates from the terms of the ordinance,” the opinion says, adding that “the manner of enforcement might be challenged as discriminatory.”

All councilors present Tuesday voted to repeal the ordinance except for Councilors Wayne Wilkinson and Peter Oleskiewicz. Neither could be reached for comment on their votes. When the council took an initial vote on the ordinance earlier in June, it passed unanimously, according to the meeting minutes.