NORTH ADAMS — The new year will likely bring new regulations for short-term rentals in North Adams, like those handled through Airbnb and Vrbo. After a year of ongoing development and debate, the City Council voted 7-2 Tuesday to back a proposed ordinance with short-term rental rules.

To make it final, the council will have to take a second vote.

What the ordinance would do: It requires short-term rentals to be registered with the city, get annual inspections, and post emergency-related information in the rental.

It spells out which zones of the city will allow certain types of rentals “by right,” and where a special permit would be needed. It explicitly requires short-term rentals to meet certain parts of the state building code.

It also requires someone in the area to be responsible for the rental. If the owner doesn’t primarily live at the property or adjacent to it, there must be a designated managing agent within 25 miles. 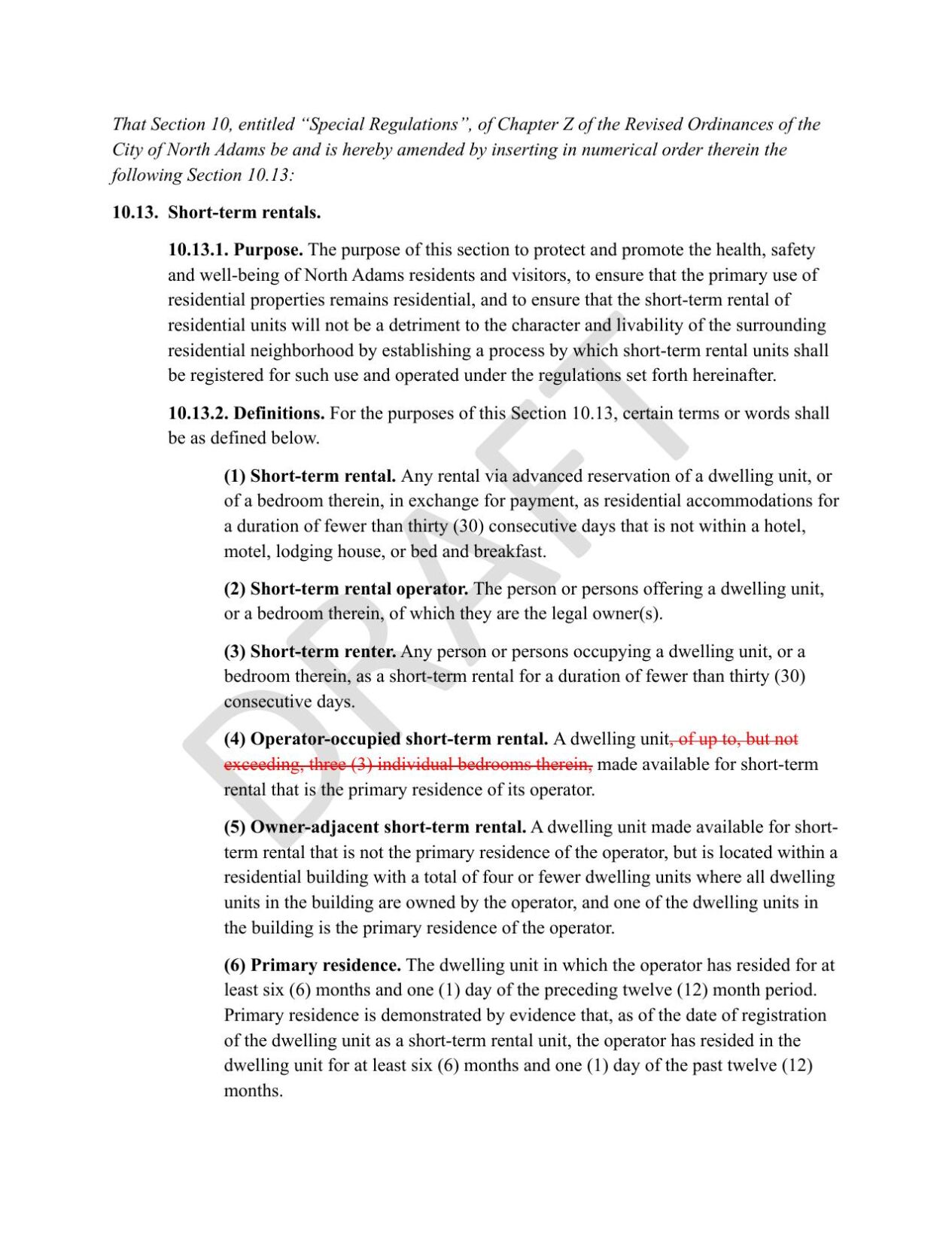 What supporters said: “I think the most important part is there, and that is we put something in place with some kind of safety [measures] ... It’s a start,” Councilor Keith Bona said Tuesday night.

He and Councilor Ashley Shade both said the rules may need tweaks. “This is not the end of us talking about this,” Shade said. “We will have to make adjustments along the way.”

“It’s an overreach of our city, and I don’t believe we have a rollout plan in place,” Barbeau said Thursday, when asked about her vote.

Harpin offered similar comments. “I just thought it was over-regulation and I don’t believe the city actually has the resources to implement it,” she said. If there are resources, she wants to see them put toward reducing blight. “It think we should be concentrating on abandoned properties and dilapidated properties in people’s neighborhoods.”

When asked earlier this month about the safety inspections, North Adams Building Inspector Bill Meranti said his department will work with owners for timely scheduling. “We are certainly going to work with them to not interrupt business,” he said.

A North Adams short-term rental ordinance appears to be nearing the finish line. What impact would it have on the million-dollar industry?

The backstory: For the past year, the council has been discussing an ordinance in meetings and public hearings. Most recently, in early December, the Planning Board voted to approve it.

What’s next: The proposal will get a legal review from the city solicitor. Then the council will take a second and final vote. The council next meets Jan. 10.

Our Opinion: How should communities regulate short-term rentals? More options to observe in the Berkshires

As companies like Airbnb and Vrbo continue their disruptive rise within the lodging sector, many Berkshire communities feel the growing pains …