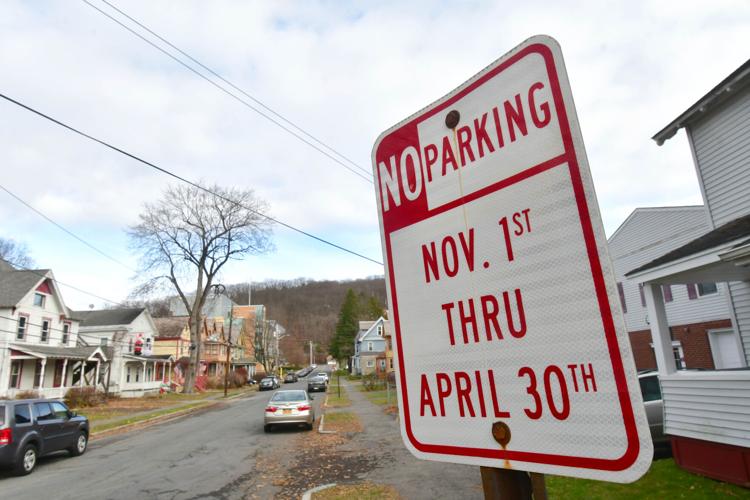 This sign on Blackinton Street in North Adams near the MCLA campus is a bit vague but the overnight parking ban has been in effect since November 1 on all city streets. 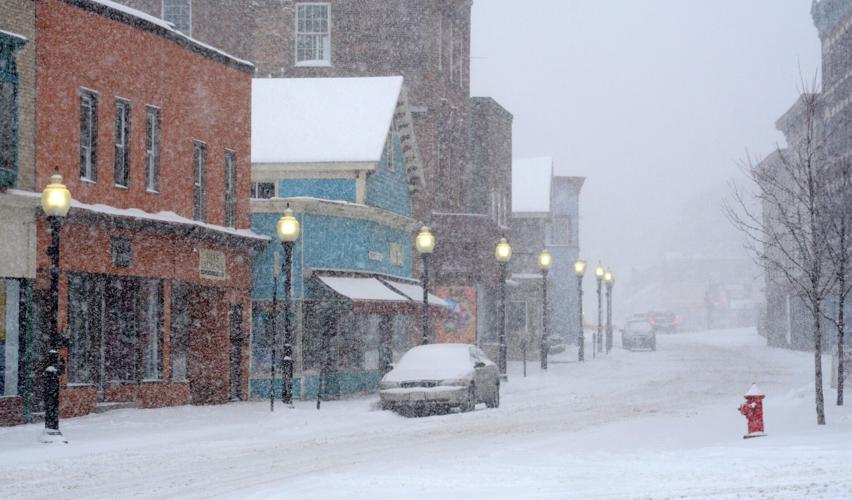 Streetlights are on in this view of Eagle Street in a deserted downtown North Adams in March 2017. The city's longstanding winter parking ban was in effect.

NORTH ADAMS — For almost half the year, parking is a problem for Jean Rand.

Her Hall Street home on the hillside north of downtown doesn’t have a driveway. In the warmer months, she parks her car on the street. But from Nov. 1 through April 15, the city’s overnight parking ban doesn’t allow that.

Rand must move her car each night — and she scrambles to find a place. Lately, she’s been parking it in a vacant lot a block away, then climbs a hill.

“I’m disabled. It’s hard,” she said. “It creates a lot of challenges.”

In Pittsfield, on-street overnight parking is restricted to certain sides of the street, but only when a snow emergency is declared. That change was made in 2020 and has stayed in place, according to Pittsfield Commissioner of Public Utilities Ricardo Morales. The town of Adams loosened its rules in 2020 — but only for a year — when the Adams Select Board voted to enforce an overnight winter parking ban only when a snow emergency has been declared.

Overnight winter parking OK in Adams — except during snow emergencies

The town then reverted to its more restrictive winter ban, similar to the one in North Adams.

North Adams officials have not signaled that the city’s rule will change anytime soon. They worry if the city moved to a system where overnight parking was banned only when snow was predicted, not everyone would move their cars, making snow removal more challenging.

Still, one member of the City Council, which sets the parking ordinances, says he’s willing to consider a change.

City Councilor Keith Bona said he would consider a system in which parking is banned only during snow emergencies. “I would entertain that discussion,” Bona said.

But he adds that he hasn’t gotten many complaints about the ban during his years on council — and notes it is a longstanding rule. “Pretty much anyone ... if they are living in any home in North Adams, should have known ahead of time, what is the parking situation,” he said.

If someone is renting an apartment with one space and they own two cars, “that shouldn’t be put on the city,” Bona said. He has noticed an increase in cars parked on sidewalks in the winter.

Anna Farrington lives downtown on Eagle Street above her gallery, Installation Space, and pays for a pass to park in a nearby city lot.

“I’m happy to be able to pay to park there, but many folks do not have the financial resources to make that a realistic solution,” Farrington said. “Perhaps during snow emergencies, the city opens the public lots to folks who need overnight parking? Other cities do it, it’s not rocket science.”

Clearing streets is important, she said, but a five-month ban to her “seems like overkill and creates a hardship for many folks in North Adams.”

Though Zoey LaCasse and her partner both have off-street spots at home to use in winter, they “despise” the city’s parking ban.

“Many houses in this area have no off-street parking. It’s quite literally impossible to put in a driveway or anything,” LaCasse said in an email. “I feel like many lower-income households have to deal with it way more, which shouldn’t be the case. Though the parking ban is important for emergency purposes with all the snow we get, it’s done without thinking.”

Rand, the Hall Street resident, dislikes the ban so much that a few weeks ago, she called the city to ask how the rule could be changed. She would rather see overnight parking restrictions in winter when a storm is predicted, like in Pittsfield. “Why can’t you give us a robocall?” she said she asked. “I just got shot down.”

Every year, North Adams Police Chief Jason Wood gets calls after the department puts warnings on cars parked on the street overnight. “Where am I supposed to park?” he said they ask. “We don’t have an answer for them.”

The city sells monthly passes for use of parking lots, but for some people, the lots are far away from their homes.

Wood acknowledges that it can be a problem, but is concerned that if parking was banned only when a storm was coming, the streets would not be cleared, creating problems for snowplows. “We’d have a ton of cars on the road,” he said. “I think the blanket system of Nov. 1 to April 15 ... makes it easier for that purpose.”

In the grand scheme of issues facing her city, a change to the parking ban is not at the top of Mayor Jennifer Mackey’s list.

“Not right now,” she said. “I’m not in favor of that.” Storms can “creep up on us,” she said. Commissioner of Public Services Timothy Lescarbeau could not be reached for comment.

Tickets for violating the winter parking ban cost $20 — and the city does issue them. Last year, 1,116 tickets were issued, according to information from the Police and Parking Departments. That’s more than $20,000 in ticket revenue last year. As of mid-November this year, 592 tickets had been handed out.

“Our parking ban has been in effect for over 50, 60 years,” said King, who is also chair of the Traffic Commission. Aside from slight changes like tweaks to the date, “I’ve never known it to be any different.”

King sees parking and snow clearing in winter as a difficult balance. She also works as a city dispatcher and will get calls from residents complaining their streets have not been plowed. “You’re not going to make people happy no matter what you do,” she said. “If you give then a ticket, they complain. If the roads aren’t plowed, they complain.”

A change in the rules would have to come from the City Council. Because there are many narrow streets in the city, King doubts an alternative system that allowed parking on different sides of the street would work.

Town officials in Adams had gotten some feedback about their equally rigid ban. If it’s 60 degrees in March, does there really need to be a winter parking ban, Town Administrator Jay Green said he heard.

“We’re not above trying it,” he said.

So in the winter that started in 2020, when a storm was coming, the town put in ban in place and sent the information out on social media, notified residents through reverse 911 calls and sent out press releases. But that didn’t seem to be enough.

“People were not moving the cars when the snow emergency was declared,” Green said. A plow hit at least one parked car.

The town went back to a ban for all winter months last year — and Green hasn’t heard any complaints. “Winters in New England are not always kind,” Green said. “It’s a fine balance.”