The yellow line on this map marks the prospective route that is being examined by the state Department of Transportation in its Northern Tier Passenger Rail Study. 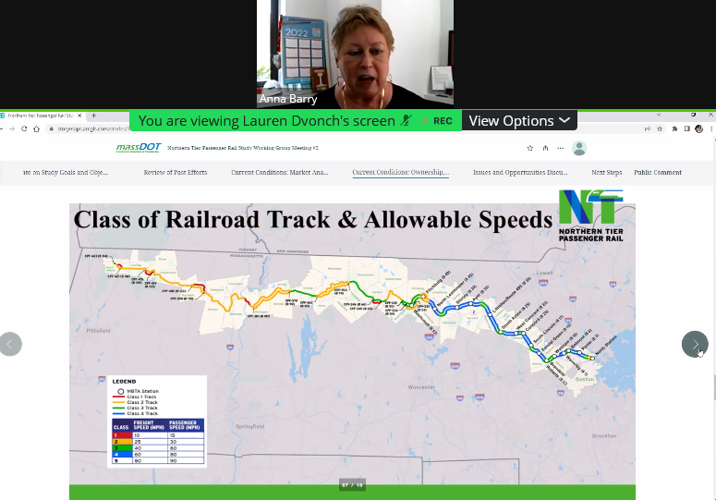 Existing railroad tracks between North Adams and Boston could support passenger trains, but it’s not clear how good that ride would be.

That was one takeaway Wednesday from a meeting of a working group of politicians, municipal leaders and experts looking into the possibility of re-establishing a passenger rail line linking North Adams and Boston.

The Northern Tier Passenger Rail Study, ordered by the Legislature, is run by the state Department of Transportation.

The study began nearly a year ago. On Wednesday, the DOT project presented study updates to the group, which first met in December. Wednesday was its second meeting.

The study is examining the viability, costs and benefits of restored passenger rail service.

Anna Barry, a project manager and vice president for HNTB Corp., a Boston infrastructure design firm working with the the state, warned that use of existing rail lines had drawbacks.

“While we did say it would support passenger service, we didn’t say it was competitive or high-quality service,” she said.

Support for North Adams-to-Boston rail service is clear. But, Rep. Barrett asks: Does the study need to take 18 months?

Paul Nelson, deputy project manager, analyzed data on demographics and existing travel patterns along the Route 2 corridor. Based on 2019 GPS data, 29 percent of daily trips in the state start or end in the northern tier area, he said.

Compared to the eastern part of the state, the central and western areas are growing slower, Nelson said.

Would passenger rail service across the northern part of the state encourage people to move west?

“Will that, however, be an attraction to younger people coming to the area and starting to look at some of these jobs?” Barrett asked.

“I think that’s one of the things we’ll be looking at,” he said. “I speculate that maybe you’re more likely to see people moving into the area who have jobs in other parts of the corridor, and then use the rail service to connect with it. ... That would almost happen first, before you see big changes in the underlying employment and job market.”

Thomas Matuszko, executive director of the Berkshire Regional Planning Commission, and a working group member, cited a need for more data on changes in rural areas.

“I think it will be very important to try to get some empirical data to determine the shift in employment patterns and work life patterns to rural areas,” he said. “So that we can justify the ‘build it and they will come’ or they’re already coming and they need a way to get to the other urban areas.”

It’s not yet clear how long it would take to get from North Adams to Boston on the line. Most of the line in the western part of the state, which is used for freight operations, has a maximum speed of 30 miles per hour, according to data Barry presented.

The study is looking at up to six possible routes. Though the legislation that ordered the study mentions Greenfield and North Adams, Barry said, planners should look at other destinations that could be useful.

The next working group meeting will be later this summer, said Makaela Niles of the DOT. The study is expected to be done by next spring.