A proposal introduced Tuesday night to the North Adams City Council would see appointed and elected city officials abide by a professional code of conduct.

“It is important that we have accountability and that we have rules and that people are able to understand and follow them,” Shade said at the City Council meeting Tuesday night, “and, hopefully, this can be a guide and resource and an enforceable document that will help alleviate some of the issues we seem to be having in our city in regards to behavior and conduct and professionalism.”

The council voted Tuesday to have the code reviewed by the General Government Committee, Mayor’s office, city solicitor, and the Inclusion, Diversity, Equity, and Access Commission. Other than comments from Shade about the proposal, there was no discussion amongst councilors about the proposal at Tuesday’s meeting. 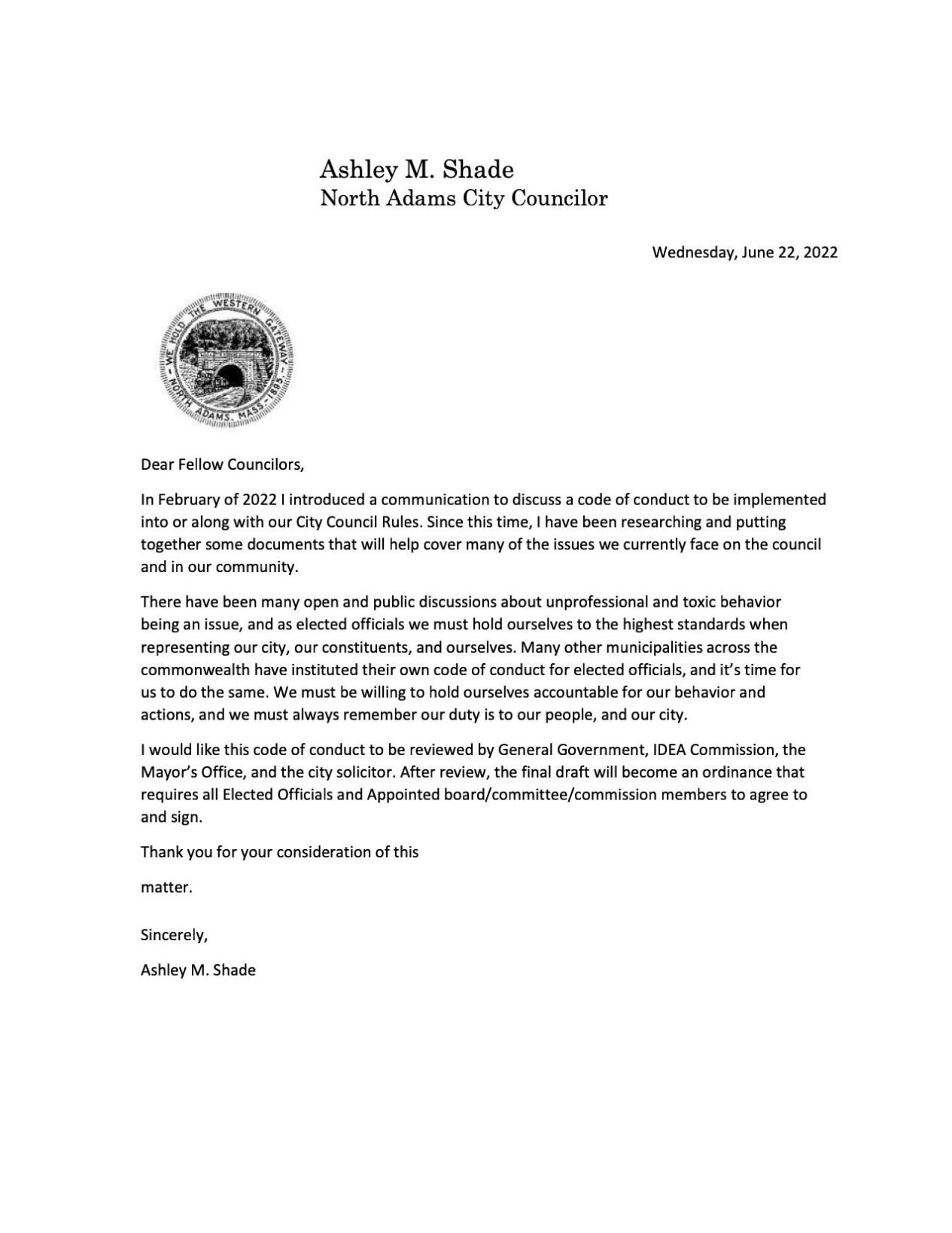 Many other cities and towns have codes of conduct, and Shade used a template from the Massachusetts Municipal Association for her proposal, she told the council.

The proposed policy would govern all elected and appointed city officials, and include written communications and social media.

Under the proposal, if an official declines to sign a statement saying they read and will abide by the policy, they cannot take their oath of office. The proposal outlines how the code would be enforced, including procedures on how allegations can be referred for investigation. Groups can also vote to censure a member under the proposed code.

Along with former council President Jason LaForest, Councilor Marie Harpin stepped down from the council last year before her term ended, citing the council’s climate. But some councilors took issue with her characterization at the time, and at least one blamed departing members as part of the problem. Harpin was later reelected.

'Toxic' political scene in North Adams spurred a meme, a 'sock of nickels' post and a police report

Marie Harpin steps down from North Adams City Council. It's the second resignation in 2 weeks

Concern about conduct has come up at past council meetings, and Shade said she spent time researching the proposed policy over the past few months.

Members of the North Adams City Council are bickering again. And they're looking to change the rules guiding member conduct

“I thought this was something that could help with some of the perceived issues,” Shade told The Eagle, adding she calls them “perceived” because “I think most of the issues come down to a breakdown in communication and people looking at things from their own biases and not looking at things from a clear, professional angle which make the situations far worse.” When taking a vote, it’s not personal, she said, “it’s doing the business for the city and the residents.”

Shade said she was not sure on the specifics of issues others were experiencing. “I pride myself on being a professional and keeping it that way, but I do know that different people have had different reasons for feeling how they feel and doing what they are doing. I really don’t know the full details.”

She added, “I just want to be able to focus on doing the work that people need done.” There is “no time for squabbling and the pettiness and anger.”

Shade’s proposal is scheduled to come back to the council in August after it undergoes review.

Will a proposed code of conduct benefit the North Adams City Council? Councilors have mixed opinions

Wanting to keep the City Council's focus on work, Councilor Ashley Shade proposed a code of conduct for elected and appointed officials.

Is the North Adams City Council 'toxic'? Or are they acting 'like a bunch of kindergartners'? Councilors weigh in on what is going on

Here is the latest evidence that some members of this council don't get along — a holdover from a frosty council last year. Recent exchanges prompt questions about how uncivil behavior may affect the group's morale and performance.