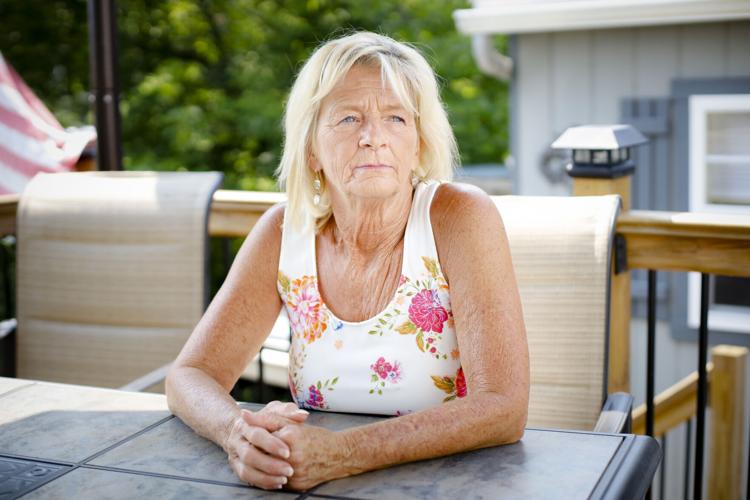 Sheri Biasin, 62, at her home in Cheshire. Starting on the day of her first Communion, Biasin was subjected to a yearslong pattern of sexual abuse by the priest who delivered her Communion. On Aug. 1, the Springfield Diocese listed that priest, the late Rev. Daniel Gill, as "credibly accused." 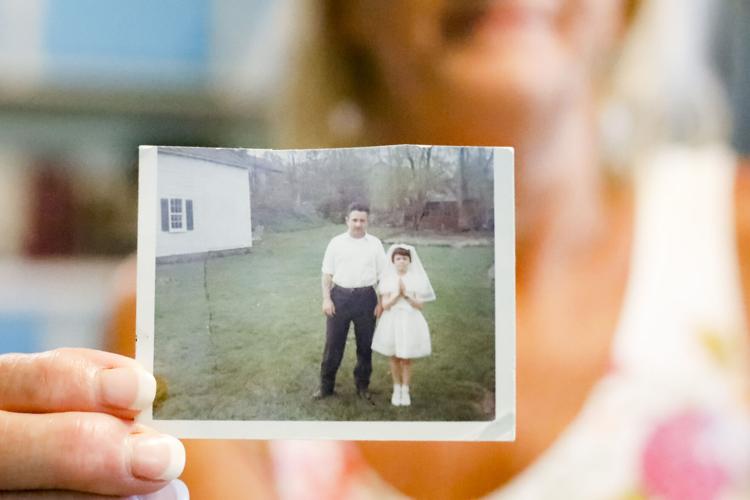 Sheri Biasin, 61, holds a photograph from 1967 of herself at age 7 with her father at her childhood home in West Stockbridge, on the day of her first Communion. Just hours after the photograph was taken, “that little girl’s life changed forever,” Biasin said. That day, Biasin was subjected to the first of what would become a yearslong pattern of sexual abuse by the priest who delivered her Communion.

A year ago, Sheri Biasin of Cheshire was still waiting for the Catholic priest who molested her to be listed as “credibly accused” by the Springfield Diocese.

The diocese, in a spirit of disclosure and healing, had just changed its policy to include priests who died before those accusations surfaced. But that new and more complete list, released in June 2021, did not mention the Rev. Daniel Gill.

The diocese said Wednesday it added Gill to its online roster Aug. 1, “based on a credible finding by the diocesan Review Board.”

A survivor’s quagmire | Two decades after a Cheshire woman reported clergy abuse, she’s back to square one, again. Was her file lost or destroyed?

Biasin said Wednesday she recently received a letter from the Most Rev. William Byrne regarding her molestation by Gill, which the new listing says occurred between the years 1967 and 1971. At the time, Gill was assigned to both the Saint Jerome Parish in Holyoke (1962-69) and the Saint Charles Borromeo Parish in Pittsfield (1969-78). Gill’s first assignment with the diocese had been to the Saint Peter Parish in Great Barrington in 1958.

“I’ve spent so many years of my life on this,” Biasin said Wednesday. She said she has questions for the diocese and declined further comment.

Biasin says she was initially molested by Gill on the day of her first communion.

When she reported that abuse, many years later, the diocese noted this on its intake form: “She feels that most of her problems in life stem from her early molestation. … Describes herself as angry … scattered, having flashbacks, unable to focus. Lots of triggers bring her molestation to the forefront.”

In the following years, the diocese helped pay for some of Biasin’s health care, to treat conditions linked to the abuse.

Biasin had met with diocesan officials over the years, since her report of abuse in 2002. When she approached the church more recently, she was told her file had been lost. The upshot: She needed to say all over again what Gill did to her.

In an interview last year, Biasin bemoaned the fact that because the diocese had lost records of her case, she needed to revisit her trauma.

“They want to re-victimize me?” Biasin asked in a July 2021 interview on the deck of her Cheshire home. “If I’m not credible, why have they been paying for decades? I’ve had the flashback of being before all those men on the commission and being judged. I’m getting traumatized because somebody destroyed my file.”

'Like it was yesterday.' Sheri Biasin recalls priest's abuse, in her own words

When asked about that last summer, the head of the diocese’s Office of Safe Environment and Victim Assistance told The Eagle the church accepts that some survivors feel mistreated.

“We’ve heard loud and clear from survivors that their experiences were re-victimizing and re-traumatizing,” said Jeffrey Trant, the diocesan official. “Our relation with survivors and their families has been so fractured.”

A review of Biasin’s case by The Eagle found that it required her to go through the complaint process again, despite the fact that the church appeared to possess documents confirming Biasin had come before its Misconduct Commission for Diocesan Personnel in 2002. She had also met with former Bishop Timothy A. McDonnell in 2008. Just before that meeting, McDonnell wrote to Biasin, on Sept. 16, 2008.

“Let me tell you how sorry I am for all that you have been through,” he wrote.

“She was molested many times from about age 8 through age 12 by Fr. Daniel Gill,” the initial intake report stated. “She has been through a lot in her lifetime, and receives therapy on a regular basis.”

Carolee McGrath, a spokeswoman for the diocese, said last year she was unable to explain why elements of Biasin’s file were lost.

How a Pittsfield parishioner exposed a molester, 25 years before another survivor reported her clergy abuse

It was Byrne, a new bishop, who directed the diocese to expand the list of credibly accused to include priests who died before allegations surfaced.

In June 2021, Byrne said he was moved to change the policy based on comments from clergy abuse survivors and their families. “The way the diocese responded to their reports of abuse was re-traumatizing and re-victimizing,” he said last year, speaking of the policy change.

Even so, Gill’s name was not on the newly expanded list as of June 2021. But 33 other priests who had served in Berkshire County were, representing more than half of the 61 credibly accused church officials in the four western counties.

In September 2021, another priest who served in Berkshire County, the late Rev. James Paul Menge, who began his career in North Adams, was added to the list.

In its statement Wednesday, the diocese noted that the new listing “does not indicate a finding of guilt and, because he was deceased when the allegation was brought forward, Father Gill was unable to respond to this allegation.”

Still, the diocese chose to act.

“The Review Board carefully reviewed the allegation, including a report issued by the diocesan investigative team, and found the allegation to be credible,” the diocese said in the statement.

The new listing says that Gill was the subject of one credible allegation.

However, in the church’s 2002 intake papers in Biasin’s case, an official noted that Biasin wanted to help others who might have been abused by the same priest. “She hopes that other people have reported Fr. Gill’s behavior as she feels that she was not the only child to be his victim,” the document said.

Separately, the church told Biasin, in a letter dated May 14, 2002, that another woman had reported, in 1992, that she was sexually abused by Gill when she was 15. The letter to Biasin was signed by Lois C. Lynch of the Commission to Investigate Improper Conduct of Diocesan Personnel.

That other case, if it exists, has not been confirmed.

“At this time, there is a single finding of credibility against Father Gill,” McGrath, the diocese’s spokeswoman, said Wednesday.

On July 17, the Springfield Diocese filed an intake form with the Berkshire District Attorney detailing a Cheshire woman's report of clergy sexual abuse. It came more than 19 years after she'd come forward to say what the Rev. Daniel Gill did to her, starting on the day of her first communion.