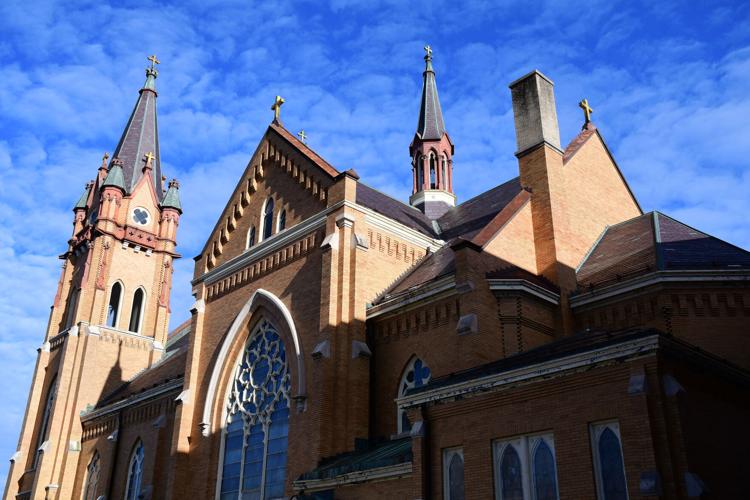 A view of the southwest side of St. Stanislaus Kostka Church on Hoosac Street in Adams. The parish bulletin initially called for this week's midnight Mass for Christmas to support the conversion of Jews to Christianity. The Springfield Diocese stepped in and now calls that intention "incompatible" with church teachings.

The wording in the original Adams parish bulletin, regarding a "Mass Intention" for the midnight Mass on Christmas Eve this week. 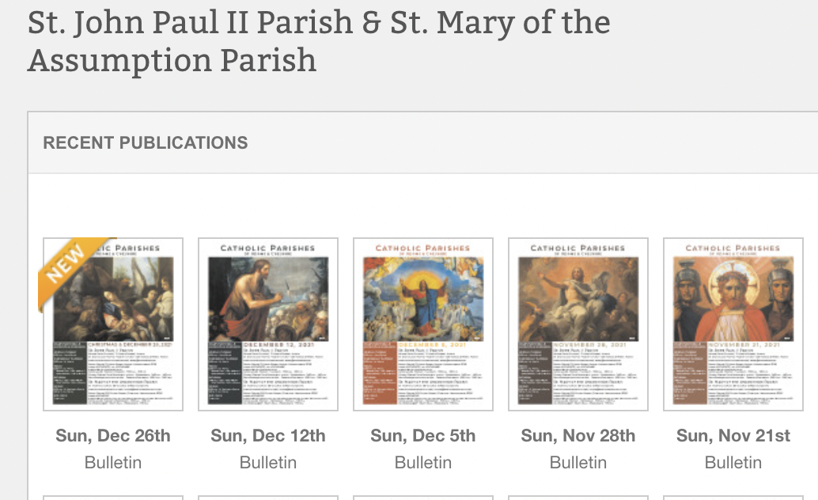 The online lineup of church bulletins for the St. John Paul II Parish in Adams and Cheshire is missing the edition for Dec. 19, in which a Mass Intention called to support the conversion of Jewish people to Christianity.

The Dec. 26 church bulletin lists a new intention for the Christmas Eve Mass at St. Stanislaus Kostka Church in Adams. 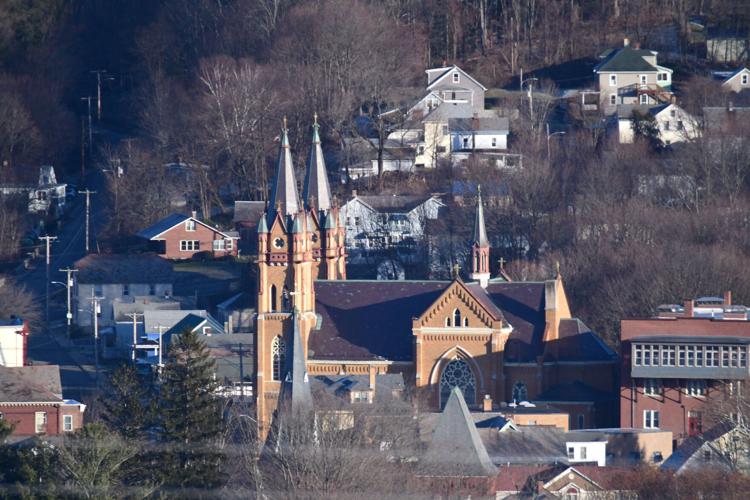 The spires of St. Stanislaus Kostka Church in Adams, as seen from Gould Road near Jaeschke's Orchard. 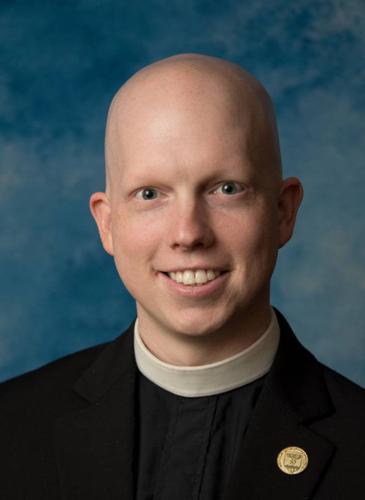 The Rev. Barrent Pease is administrator of the St. John Paul II Parish, which includes two churches in Adams and one in Cheshire.

ADAMS — When the weekly church bulletin serving Catholics in Adams appeared last weekend, it advised parishioners that come Christmas Day, their Midnight Mass would be dedicated to a mission the Vatican now officially opposes: The conversion of Jewish people to Christianity.

By referring specifically to Jews, the planned “Mass Intention” at the St. Stanislaus Kostka Church ran counter to policies outlined in 2015 by the Vatican. Targeting Jews for conversion is widely seen as improper and offensive to that faith — and that’s how an Adams parishioner felt as well.

‘Family’ at St. Stan’s school in Adams will persevere, its leader says

“This strikes me as anti-Semitic,” Richard A. Jette, a member of the St. John Paul II Parish, wrote in an email Sunday to Bishop William D. Byrne. “Is this now the official stance of the Church? Is this the current teaching of the Church?” Jette asked.

It isn’t, and the Dec. 19 bulletin with the reference to converting Jews — which Jette believes was written by the parish’s presiding priest, the Rev. Barrent Pease — was removed from the selection of publications available online. A person familiar with the situation confirmed that the issue was pulled by order of the diocese.

In an email back to Jette on Monday afternoon, a copy of which was obtained by The Eagle, Byrne wrote: “I just recently learned about this announcement and intention. I am sorry for the confusion. It has been changed and removed from publication as far as I understand.”

In the Catholic faith, an “intention” outlines a special purpose for which a liturgical rite like a Mass is celebrated, or for which prayers are offered.

Mark Dupont, a spokesman for the diocese, said the intention that appeared last weekend was found to be “incompatible” with Catholic teaching “and our relationship with the Jewish people.”

“As soon as the Bishop was informed of this announcement he directed that it should be changed, which it has been,” Dupont said by email, in response to questions. “We recognize and affirm the Jewish people are God’s chosen, the people to whom the Lord our God spoke first,” Dupont said. “We stand with them as brothers and sisters in our common God.”

On Tuesday afternoon, leaders of the area’s Jewish community met to discuss how they wanted to respond to the publication of the original intention.

Rabbi Rachel Barenblat of Williamstown said the group, which included members of the Jewish Federation and the Anti-Defamation League, decided to contact representatives of the Adams parish and “seek to open a conversation about this after Christmas when their holy season has concluded.”

“We’re in agreement that speaking with them instead of about them is likely to yield a better result for our community,” she said in an email to The Eagle. “We’re going to work on building bridges with this community.”

For the Adams parishioner, the initial plan to seek the conversion of Jews hit home.

“My son-in-law is Jewish and has attended midnight Mass with us,” Jette wrote to Byrne. “I would not invite him to a Mass being offered by Fr. Pease as my son-in-law would be deeply offended by this intention. This is an insult to my son-in-law, my grandsons and all people of the Jewish faith.”

Pease is the priest who since February has administered the parish, which includes the St. Stanislaus Kostka Church and the Notre Dame Church, both in Adams, and St. Mary of the Assumption in Cheshire.

On Monday, The Eagle reported that Pease urged parishioners at St. Stan’s to support a consolidation of services into Notre Dame, saying the two Adams churches would only survive, in light of mold contamination at St. Stan’s and the high cost of delayed building repairs, by joining.

Pease released a statement Tuesday through the diocese saying that Springfield church officials and the town of Adams would help his parish contend with the mold problem, allowing spaces other than Kolbe Hall in the church basement to remain in use. That includes Friday’s Midnight Mass and “the normal weekend schedule,” he said.

“It is with great joy that we have the official approval of the Town of Adams to continue using the upstairs of St. Stanislaus Church for worship,” Pease said in the statement. On Monday, Adams Town Administrator Jay Green said in an interview that decisions about use of St. Stan’s lay entirely with the parish itself, not the town.

In 2015, the Vatican’s Commission for Religious Relations with Jews published a document saying that rather than trying to convert Jewish people to Catholicism, Catholics should work with them to fight anti-Semitism.

The Adams parish is named for the first modern pope to pray in a synagogue and the first pope to call anti-Semitism a sin “against God and man.”

“The Catholic Church neither conducts nor supports any specific institutional mission work directed towards Jews,” the commission’s report said. “A Christian can never be an anti-Semite, especially because of the Jewish roots of Christianity.”

The Adams parish is named for the first modern pope to pray in a synagogue and the first pope to call anti-Semitism a sin “against God and man.”

Members of a parish must secure a “Mass Intention” in advance. The custom at St. Stan’s has been to open a “Mass Book” in the fall for the following year. Because so many parishioners wished to obtain prized dates, such as Christmas, the church decided to keep intentions for those dates general.

Jette said the intention that had been designated for the Midnight Mass this week was “For the members of St. John Paul II parish.”

He believes that only Pease was in a position to change that intention to what appeared in last Saturday’s bulletin: “For the conversion of the Jewish people that they receive Jesus as their messiah.”

“It had to be him,” Jette said of the priest, when asked who made the change. “There would be no one else who would make that switch.”

In an email Tuesday to Pease’s confirmed diocesan address, The Eagle asked whether he wrote the language calling for the religious conversion of Jewish people. He did not respond.

Dupont did not reply to a question about whether Pease wrote the bulletin’s intention referring to the conversion of Jews.

In the Dec. 26 bulletin, the intention for the Midnight Mass at St. Stan’s now reads: “For the conversion of all non-Christians, that they receive Jesus as their messiah.”

In addition to the online bulletin, the weekly newsletter is printed and handed out at Masses. While the Dec. 19 version is no longer on the parish’s website, the print copies went into circulation last weekend, Jette said. “Anybody who was there and took one, they still have it.”

The Catholic priest in Adams who sought to dedicate a Christmas Mass to the religious conversion of Jews will not attend those rites in his parish this weekend.

We are saddened that this requires stating: The church bulletin circulated earlier this week to an Adams parish that blatantly targeted Jewish…

Bishop removes Adams priest, asks him to reflect on ‘a trying week’

A new permanent administrator will guide Catholic churches in Adams and Cheshire — and their former lead priest, the Rev. Barrent Pease, is out. Bishop William D. Byrne announced the changes in a letter to parishioners read aloud at Masses on Friday afternoon.

Catholics in Adams and Cheshire are feeling a sense of relief, as they reflect on a former administrator's tenure and abrupt departure. Several parishioners say that even before the Rev. Barrent Pease listed the conversion of Jews as a “Mass Intention,” they differed with him about aspects of his leadership, which they characterized as impulsive and traditionalist.

Our Opinion: Diocese's responsiveness to local parishioners' woes is worth noting

After a presiding priest roiled a Berkshire parish by inserting an Intention targeting Jews for “conversion” into a church bulletin, The Eagle…

The grim topic among Jewish leaders: How to keep sacred spaces safe with antisemitism on the rise

Last week, Jews in Berkshire County joined with more than 9,000 others nationwide for a training webinar about crisis, violence and hard decisions. “We're not naïve,” said Dara Kaufman, executive director of the Jewish Federation of the Berkshires. “We live in a world where antisemitism has always existed. It will always exist. It has reared its ugly head in many places and continues to grow.”