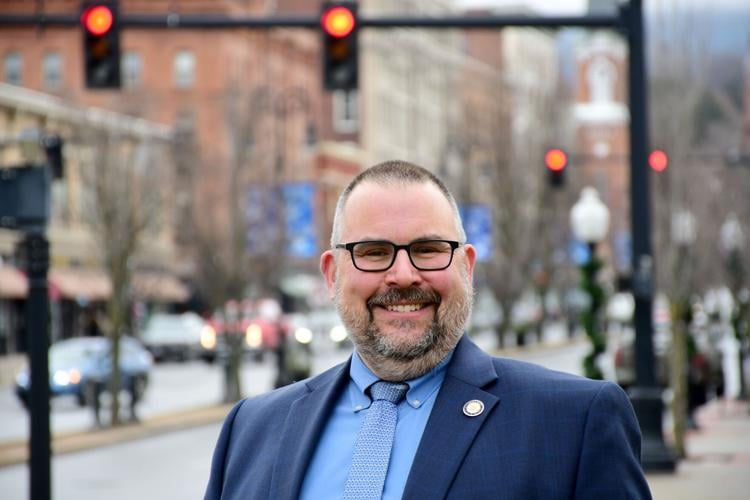 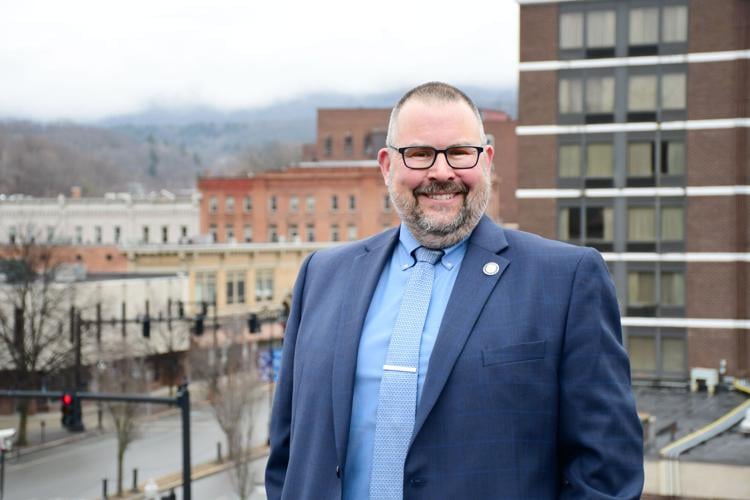 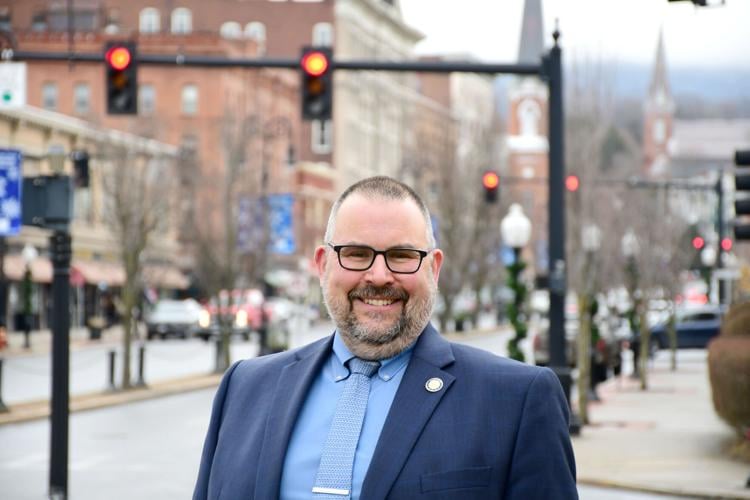 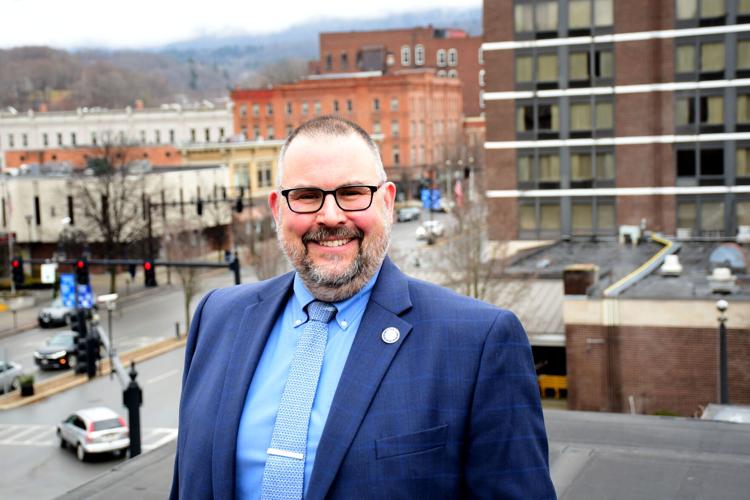 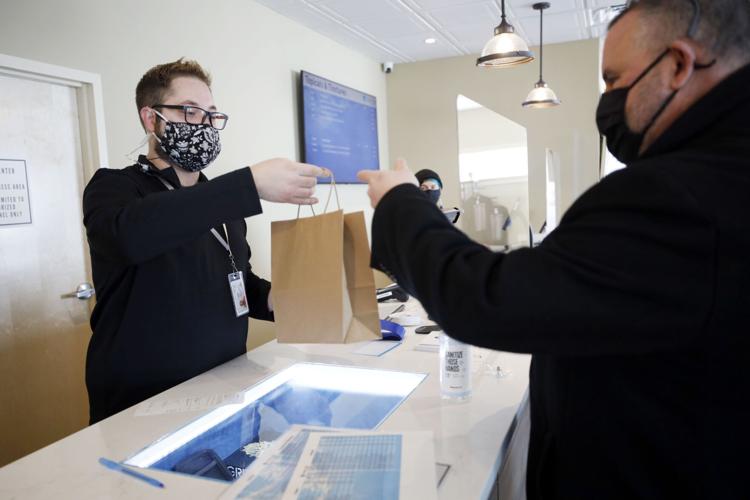 North Adams Mayor Thomas Bernard is the first customer, after receiving some recommendations from General Manager Keifer Gammell, on opening day at Clear Sky Cannabis in North Adams in March 2021.

NORTH ADAMS — When he was sworn in for a second term as mayor in 2020, Tom Bernard had carefully curated plans.

“I had this beautiful, multicolored, swim lane priority document that was all the things that I wanted to do,” he said. “Finance and budget and projects, and organizational things we’re going to do with schools, and then projects like moving the needle on the bike path, and the Mohawk (Theater) and Heritage Park.”

And then, Bernard was attending virtual meetings about the coronavirus and figuring out the city’s response. “Once we really we hit that mid-March declaration of the state of emergency,” he said, “it became the thing that defined everything else we did.”

Thinking back to his initial priority document, he said, “We’ve made some movement, but I think the best laid plans, the ambitions, most of that got put aside.”

First elected in 2017, Bernard is stepping away from office as he wraps up his second term. On Saturday, Jennifer Macksey will be sworn into office as mayor, making city history as the first woman to hold the position.

Bernard is one of many mayors across the state who decided not to run again after serving during the pandemic. Almost a fifth of mayors in Massachusetts have decided to leave office in 2021, CommonWealth magazine reported.

Earlier this year, Bernard made the decision for a few reasons. “It was COVID, it was looking at the political environment, it was just a sense that this was the right moment,” he said sitting in his office on a recent afternoon. When he made his announcement in February, he told The Eagle he wanted to focus on pandemic recovery instead of a reelection campaign.

Looking back at his tenure, COVID looms large. “Part of leading a community through COVID response has been, I was the person who killed fun in North Adams for the better part of the year,” he said with a laugh. “I was canceling tag sales and closing parks and taking down basketball hoops and all of these things.” He also dealt with the Crane closing its North Adams plant, a decision the business attributed in part to COVID.

Outside of City Hall, a regular Dungeons & Dragons group with friends helped Bernard personally during the pandemic. It is “a way to stay connected,” he said, “check in with each other, and of course, battle goblins.” There’s a hint of that in his office: a larger than life, 20-sided purple dice, the kind used for Dungeons & Dragons, sits on his shelf.

Though COVID-19 derailed Bernard’s initial plans, he has a list of projects he’s proud of: opening the splash pad, adding hybrid vehicles to the city’s fleet, launching a new city website, making the city a “cannabis-friendly community” and getting a grant to further the bike path project.

“It’s not fancy or flashy,” he said, “but I’m really proud of the work that community development and the team did on zoning, both the the overall update of the of the map and the use tables, but also the work we did to to get Smart Growth (Zoning) passed.”

There are also projects that didn’t get as far as he wanted.

“I’m disappointed that we couldn’t close the Mohawk (Theater),” he said. Bernard tried to advance a proposal to redevelop the long-empty theater from a developer, but after a number of City Council meetings, the council decided to wait until the new year when Macksey is in office to vote on an order to sell the building.

That was a point Macksey and Bernard disagreed on. Macksey told the council: “In my first meeting with Mayor Bernard, I asked him not to proceed with a sale.” She said she wants more transparent procedure and to give prospective developers more time.

Bernard also wishes the city got closer to a new public safety building. “I really wish that I had been able to do a little bit more there, unlock the bond money,” he said, referencing $1.2 million that the legislature authorized in 2018 to put toward engineering, design and siting of a public safety facility in a state bill that includes, in total, about $3.9 billion for projects around the state. That money has not yet been released. But, Bernard added, with help from the Berkshire Regional Planning Commission, a city group worked to narrow down a list of possible sites which will help move the project forward.

The million-dollar question: Where to get millions for a new public safety building?

City Council President Lisa Blackmer also wishes that a new public safety building would have advanced further, but she applauded Bernard’s work getting help from Berkshire Regional Planning on site analysis. “Honestly, I think it should have been released sooner,” she said of the bond money.

She has served under three different mayors. “I think they have different styles,” she said. Bernard’s style didn’t always click with everyone, she said, but he was professional and “I had a great working relationship with the mayor.”

Like any mayor serving the past two years, “unfortunately, his major legacy is going to be COVID, having to deal with that,” Blackmer said. When COVID first hit, Bernard quickly sprang into action, she said. “Change after change, order after order, weekly meetings with the governor,” Blackmer said, speaking of Bernard’s tenure at a City Council meeting in late December. She added, “Masks, PPE, sanitizer, remote learning, toilet paper shortages — I know those were not the words you expected to define your service, but you persevered.”

A number of other councilors thanked Bernard. “I know at times we have not agreed on things,” Councilor Keith Bona said at the meeting. “You’re the third mayor that I have served with and each mayor brings in their own philosophy and style ... It’s definitely a position that you walk into and you get a target put on ya. It’s not always fun, but I think you handled it well and professionally.”

Infrastructure was another challenge during Bernard’s tenure.

Early in 2021, broken fire hydrants delayed firefighters’ response to two fires, and the city then replaced 50 hydrants later in the year.

Infrastructure has been and will continue to be a challenge in the city, Bernard said. “Capital needs continue to mount up, deferred maintenance continues to mount up. And that would have been true with or without COVID.”

As Bernard exits City Hall, he is taking some time off before starting a new job that he can’t yet give details about. “I don’t mean to be coy,” he said, “but it’s not something that I can announce yet.” He added, “What I can say is I’m unbelievably excited for this next chapter.”

After he decided he was not seeking a third term, he didn’t have future plans, and as recent as mid-November he interviewed to be the Williamstown town manager, though he was not selected.

“The fall has really felt like being a high school or college senior and lots of well-intentioned people saying, ‘What are you doing next?’, and not being able to have the answer,” he said.

Though he is looking forward to his next job, “it’s bittersweet, because I have loved this job.” He added, “I really tried to approach every day — even in those days, early in COVID, when I was the only person in the building and you start to realize that you’ve been talking to yourself for 20 straight minutes, you’re like, OK, I need a little grounding — I really have tried to approach every day in this role is a gift.”

Photos: A look back at Tom Bernard's career in North Adams

Mayor Tom Bernard has announced earlier this year that he would not seek reelection to a third term. Bernard was elected in 2017, and will be …

“I had a great working relationship with the mayor."

"You're the third mayor that I have served with and each mayor brings in their own philosophy and style ... It's definitely a position that you walk into and you get a target put on ya. It's not always fun, but I think you handled it well and professionally.”

"Tom is a very smart man and he will do well in whatever he decides to do. I thank him for his support during the transition. And I wish him all the best in the future and his family.”

"It's not fancy or flashy, but I'm really proud of the work that community development and the team did on zoning, both the the overall update of the of the map and the use tables, but also the work we did to to get Smart Growth (Zoning) passed."