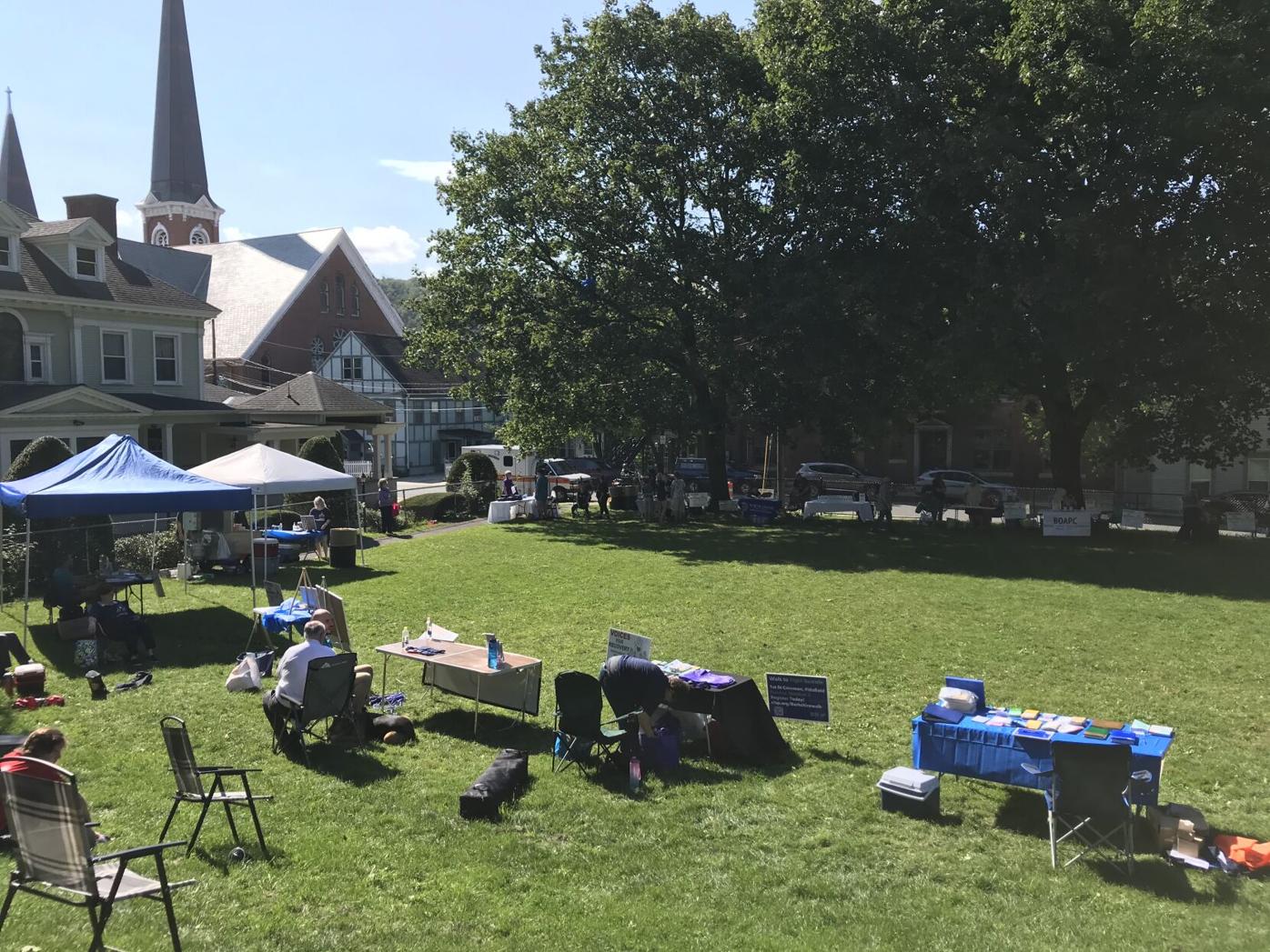 People gather at Colegrove Park in North Adams on Saturday for the annual Voices for Recovery event, hosted by the Northern Berkshire Community Coalition. 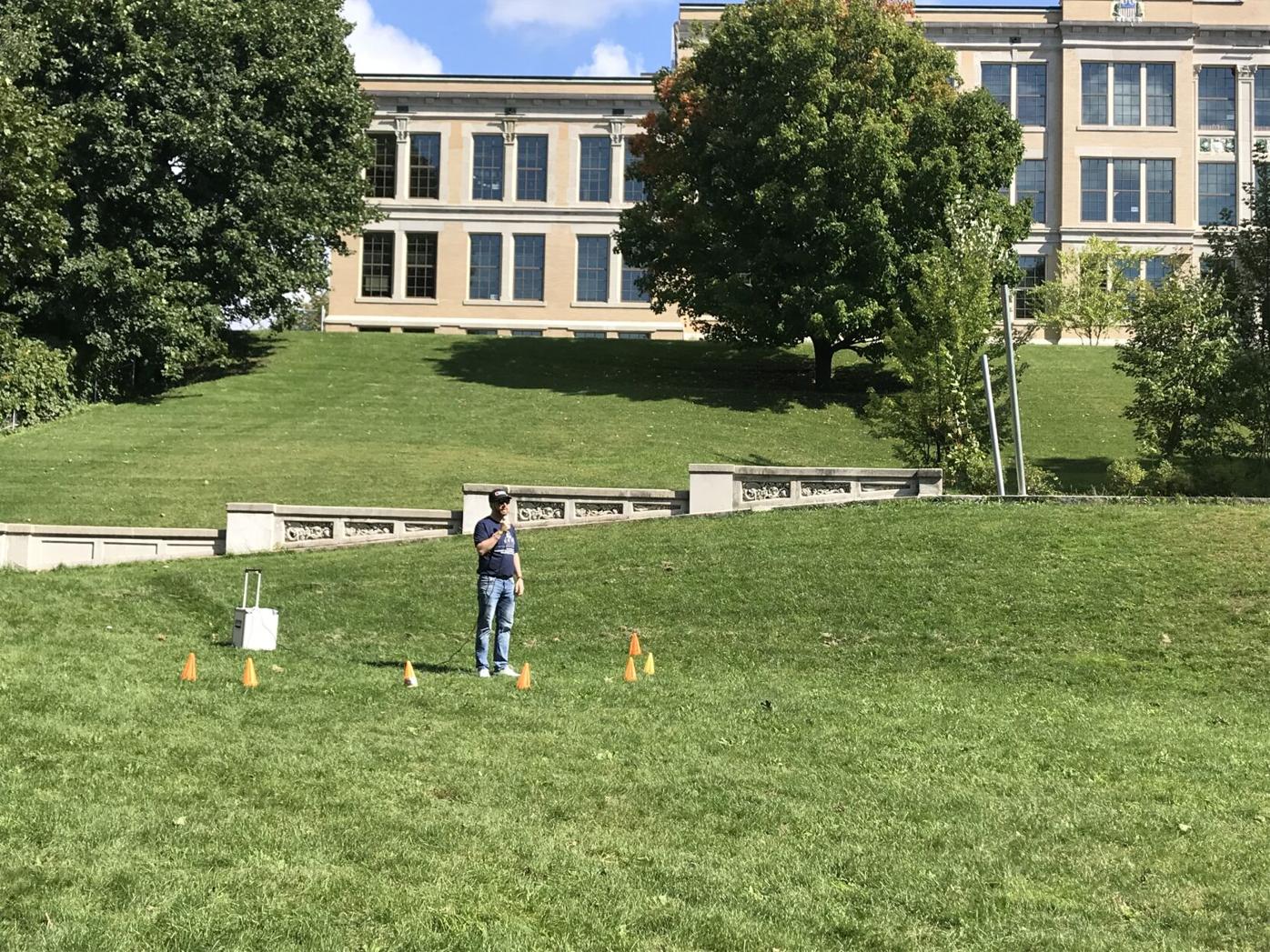 Dylan Lundgren addresses the crowd. Lundgren talked to the group about his recovery, explaining that he joined a 12-step program, got interested in spoken-word poetry and learned to express himself to other people. Connection was key.

NORTH ADAMS — When Dylan Lundgren was in high school in Connecticut, he got good grades, had friends and was a successful athlete — but there was more to the picture.

Lundgren struggled with his mental health as a teenager. “I had not picked up a drink or drug yet. When I did, I thought it was the solution, because all that inner turmoil went away. ... Unfortunately, that doesn’t last.”

Years later, the Dalton resident is in long-term recovery and works as an addiction recovery advocate, he told a crowd of people gathered Saturday at Colegrove Park for Voices for Recovery, an annual event hosted by the Northern Berkshire Community Coalition.

Lundgren moved to the Berkshires more than a decade ago.

“This is where I got sober,” he said.

Lundgren talked to the group about his recovery, explaining that he joined a 12-step program, got interested in spoken-word poetry and learned to express himself to other people.

“When I started to see other people talk about their journey and their struggle,” he said, “that was the first step in my path — realizing it’s OK to talk about these things. It’s OK to not be OK.”

Connection was key for Lundgren.

“I was around people who had the way out,” he said. “Not only had they not maybe used for a while, but they also seemed kind of content with their life.”

A 12-step program helped him, he said, but “that doesn’t have to be everyone’s path.”

Last year in Berkshire County, 56 people died of opioid overdoses — that’s an increase of 44 percent from the previous year — according to preliminary state data.

COVID-19 stopped in-person Narcotics Anonymous meetings, but “it hasn’t closed the door on recovery,” said a member who didn’t want his name used because he wanted the focus to be on NA, not him.

People met online, and now some have returned to in-person meetings.

“People are glad to see each other. ... It’s been really exciting,” he said. Their goal: “To help the addict who suffers,” he said, adding that, sometimes, that’s him, even after years of being in recovery.

As he walked into Colegrove Park, Fred DeFreest said he has found a supportive community in Narcotics Anonymous and in North Adams.

“I’m in recovery,” he said, wearing a button that read, “I’m a recovery ally.” He has been in recovery for nine months, he said.

Others at the event had family members in recovery.

Brittany Choquette said her fiancee is in recovery. For years, she has been coming to the event.

— Brittany Choquette, who said her fiance is in recovery and who, for years, has been attending the event

Stephen Murray, a North Adams resident and an administrator for the Never Use Alone hotline, also spoke to the crowd. He recalled going into treatment in 2011.

He continued: “What I’ve learned over the last 10 years is that the problem is with our treatment industry itself. There was never any discussion about relapse — beyond it being an evil or bad thing.”

Murray wasn’t taught about overdose prevention, for example, or what to do if he did use drugs again, he said.

Tolerance can change after detox or a period of abstinence, increasing the risk of overdose, Murray pointed out. “If that’s the case, why aren’t we ever prepared?”

His parents were not taught what to do if he relapsed, he said.

If he were in that situation now, he would ask them to be with him while he used drugs and to carry the overdose-reversing drug naloxone.

“By adopting a harm-reduction philosophy and expressing radical love and support, they would understand that doing so wasn’t enabling me, it was keeping me safe while I sorted things out in my own way, in my own time,” he said.

“The overdose crisis has one simple fix: We need to be there for each other — not just when someone is recovering the way you want them to, but when they are going through bumps in their journey,” he said.

“Buddy up. Never use alone, under any circumstance. Ask someone to sit with you. Call our hotline. Love and forgive yourself.”

'Kimber would be dead': How an overdose safety hotline saved a North Adams woman's life

EAGLE INVESTIGATIONS: On a day that could have been her last, a woman struggling with substance use disorder in North Adams remembered a business card in her wallet — and picked up her phone. Call by call, the Never Use Alone program is saving lives.