WILLIAMSTOWN — Williamstown will not fire the police officer who once kept a photo of Adolf Hitler in his locker, a display he has called a joke, despite calls from two groups for his dismissal.

In letters to both this week, the chair of the town’s Select Board says the panel found the photo “highly offensive” and terms requests to fire the officer, Craig Eichhammer, “very valid.”

“We understand, and agree, that an officer having a photo of Hitler in a police locker is unacceptable and is highly offensive to the community."

But, the board does not have the authority to fire Eichhammer. And even if it did, Andrew S. Hogeland writes, that action might not stand up, after other town officials did not see strong enough grounds for firing.

“Though we understand the pain and fear that underlie the advocacy of some of our residents for termination, our understanding of the facts and applicable law is that the Select Board has no jurisdiction to reverse or modify those decisions,” he wrote in a letter this week to the Berkshire County branch of the NAACP. 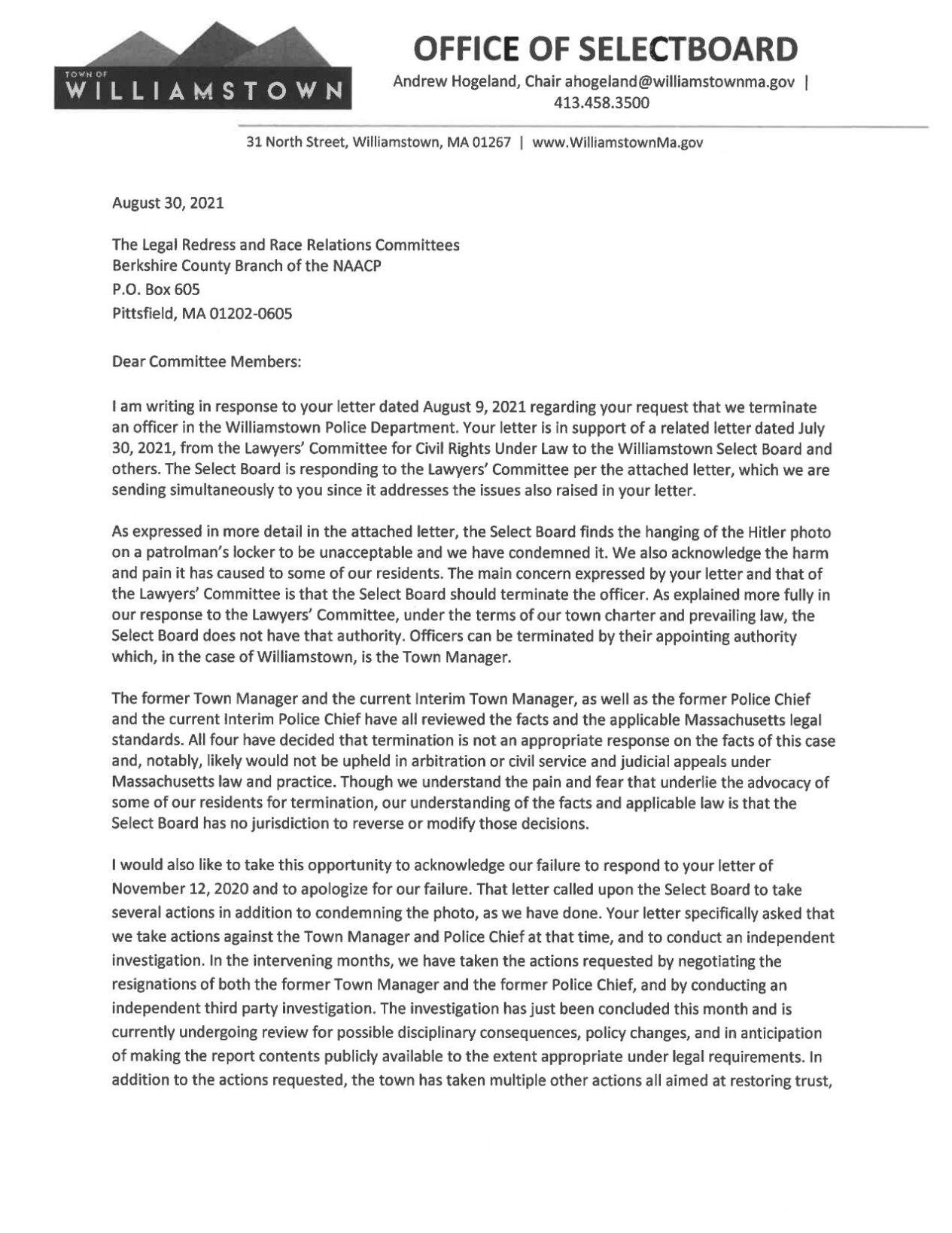 Hogeland explained the board’s thinking in letters to the NAACP branch and to the Lawyers’ Committee for Civil Rights Under Law, based in Washington.

This summer, representatives of both called for Eichhammer’s firing. The Lawyers’ Committee said in a July 30 letter that the officer’s decision two decades ago to put up a photo of Hitler, in the town’s former police station, mimicked actions by “neo-Nazis and other hate groups” and suggested to the public that officers in the department share antisemitic views.

In their own request to the board, the Legal Redress and Race Relations committees of the local NAACP branch said Eichhammer’s actions demeaned the department and collapsed public trust.

“Such behavior is abhorrent and reprehensible,” the Aug. 9 NAACP letter said. “Any public servant who engages in such behavior does not deserve employment with a public agency.”

Hogeland, the Select Board chair, expressed sympathy with the criticism and called Eichhammer’s display of the photo “unacceptable.”

But, the board only has the power to fire a town manager, he noted. Four past or current town managers and police chiefs, Hogeland said, all agreed that displaying a photo of Hitler, under the circumstances of the Williamstown case, is not sufficient grounds to fire Eichhammer. 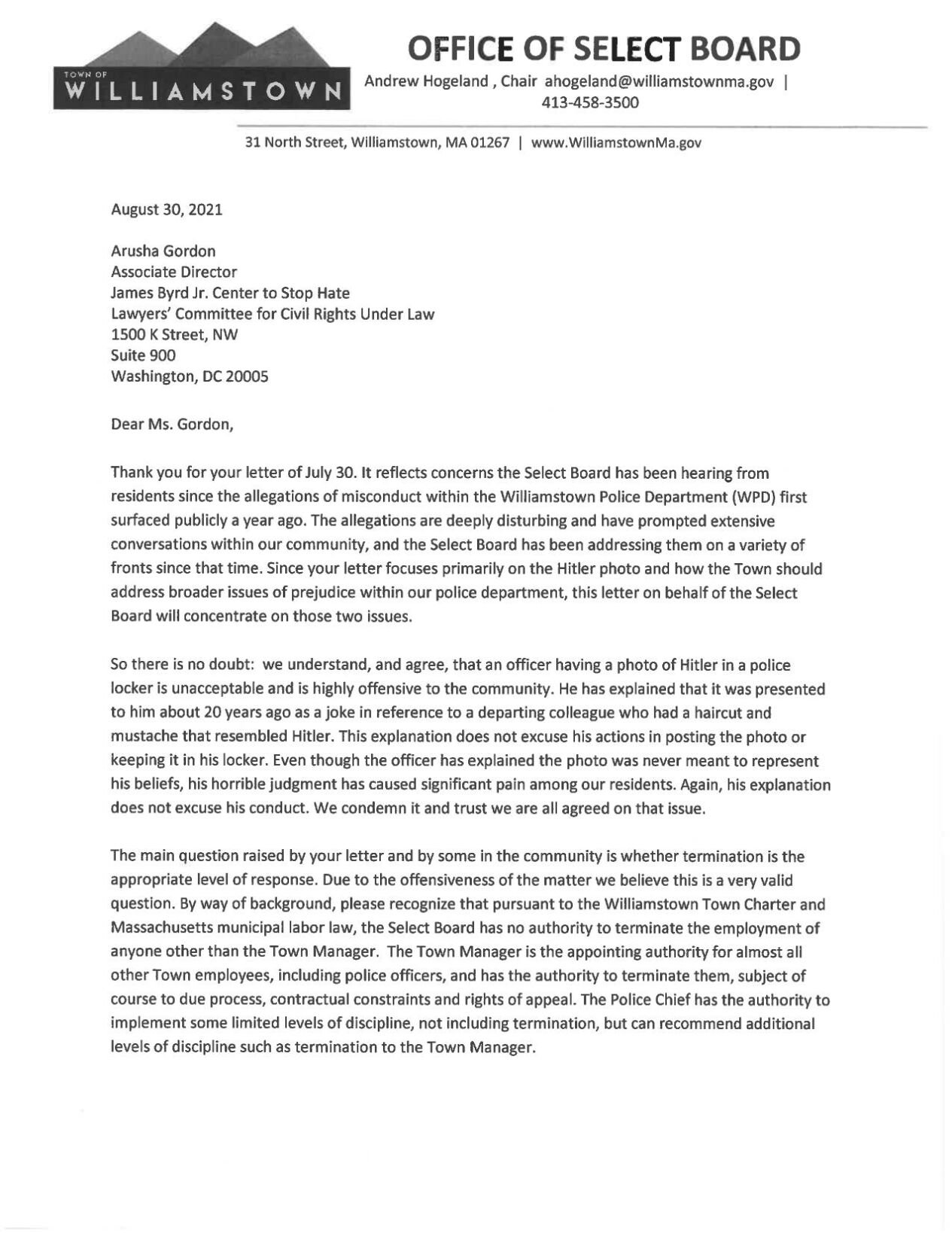 “Based on their reviews of the facts and the applicable Massachusetts legal standards,” Hogeland wrote to the Lawyers’ Committee, “all four have decided that termination is not an appropriate response and, notably, likely would not be upheld in arbitration or civil service and judicial appeals .…”

In his message to the NAACP, Hogeland offered the same explanation, noting the board’s lack of authority to fire an officer, and the belief that even termination by the person with such power in town would not weather a legal challenge.

Eichhammer has said he put up the photo to poke fun at a former officer who resembled Hitler.

“I stuck the photograph on the locker wall just as one would of possibly hanging a comic strip or picture they thought was funny,” Eichhammer said in a statement in 2020.

“We understand, and agree, that an officer having a photo of Hitler in a police locker is unacceptable and is highly offensive to the community. … [The officer’s explanation] does not excuse his actions in posting the photo or keeping it in his locker. … We condemn it ….”

Eichhammer, a 31-year veteran of the Williamstown Police Department, is a 2004 recipient of the Medal of Valor for showing restraint in a life-or-death scenario.