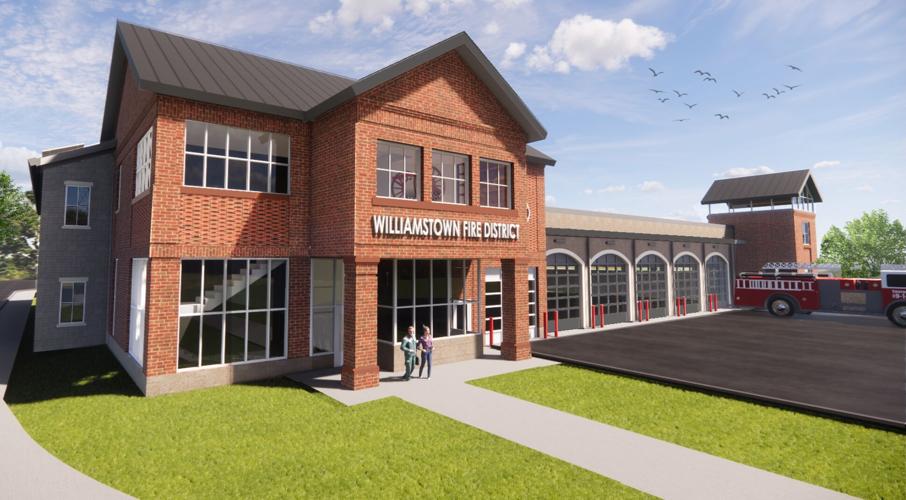 This is an arhcitectual rendering of the proposed Williamstown fire distrct headquarters being planned for Main Street. 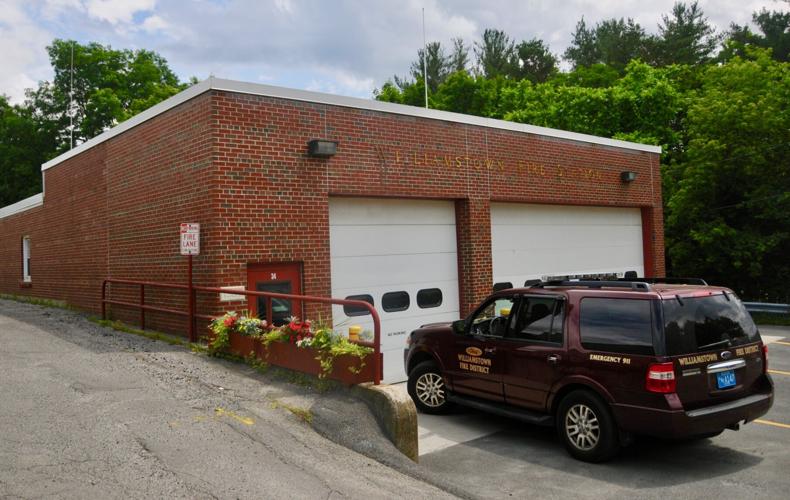 The current Williamstown Fire Station was built in 1950. Soon, town residents will decide whether to approve a $20 million bond package that would fund the construction of a new station.

WILLIAMSTOWN — Officials are designing a new fire station to use no fossil fuels. As much as possible, materials used to construct the proposed Main Street station will be created and shipped without fossil fuels.

At a Town Meeting in 2021, voters approved a resolution proposed by the Williamstown COOL Committee calling for Williamstown to be a net-zero community, or one that emits no greenhouse gases. The Fire District set the same goal for the fire station.

“This is the first construction project since the net-zero resolution was passed.”

To achieve the project’s net zero goals, the roof and grounds will carry solar panels to power the station. And efforts are being made to keep the building well insulated and airtight, with heating and air-conditioning equipment powered by heat pumps, which require less electricity, and run on electricity generated on-site.

“This is the first construction project since the net-zero resolution was passed,” said Jim Kolesar, a member of the fire district’s Building Committee, during a public information session Wednesday night.

Early next year, town voters will be asked to approve a roughly $20 million bond financing plan for construction of the proposed 27,000-square-foot, two-story fire station next to the Aubuchon Hardware store. The plan will need at least two-thirds of votes to pass.

Chris Wante, an architect with EDM who is helping design the station, said several tactics will be employed, including reducing demand for energy within the building, harvesting energy from the site, using renewable sources of power through wind, solar panels and heat pumps, and maximizing efficiency in the building’s operations.

Globally, he said, emissions from buildings account for 28 percent of carbon entering the atmosphere. And 11 percent comes from manufacturing building materials and construction.

To reduce the need for energy use, designers are leaning on improved insulation, managing air flow and efficient lighting. Materials would include recycled steel and low-carbon concrete. A $400,000 state grant is helping to pay for the design work.

Chris Schaffner, a designer with Green Engineer, said “site resiliency” means a location can handle storm water without drains and underground piping. Instead, water will seep into the ground, adding to the local water table. Under the ground-mounted solar panels, there could be pollinator-friendly vegetation.

And while a significant number of trees will be taken down, new trees and shrubbery will be planted.

If the solar panels are purchased outright, rather than through a lease, the payback period — when energy savings cover panel costs — would be six to eight years. Once that happens, the panels would generate between $1 million and $1.4 million over 20 years in energy savings.

Why a new station?

The existing 5,000-square-foot station was built in 1950. The three-bay station isn’t big enough to house the department’s four fire trucks and, at the same time, safely accommodate firefighters gearing up for a call.

A 2019 report by Municipal Resources Inc. evaluated buildings in town and the department’s facilities, apparatus and operations. It found the town to be at “moderate to high level of risk” of firefighter or civilian injury due to issues related to the inadequate and outdated fire station.

The facility has no room for expansion, is not energy-efficient, and lacks space for larger firetrucks and storage. Heating, electrical and plumbing systems are outdated and in violation of OSHA and building codes.

A new station would provide a sanitary space to get geared up, and a separate space to shed the gear and clean it, along with a shower to sanitize the firefighters before they don street clothes and head home.

If funding is secured, construction could start in the spring or summer of 2023, with completion expected in late 2024 or early 2025.

The building would include bunk rooms for eight people, anticipating a time when volunteers are no longer enough to staff the department. Officials expect to see at least a couple of paid firefighters join the ranks in Williamstown in five to 10 years.

Other areas in a new station would include administrative space, a meeting room, training spaces, six vehicle bays and storage.

There are roughly 25 volunteer firefighters in the Williamstown Fire Department. They responded to 241 calls last year, including 10 mutual aid calls.

Scott Stafford can be reached at sstafford@berkshireeagle.com or