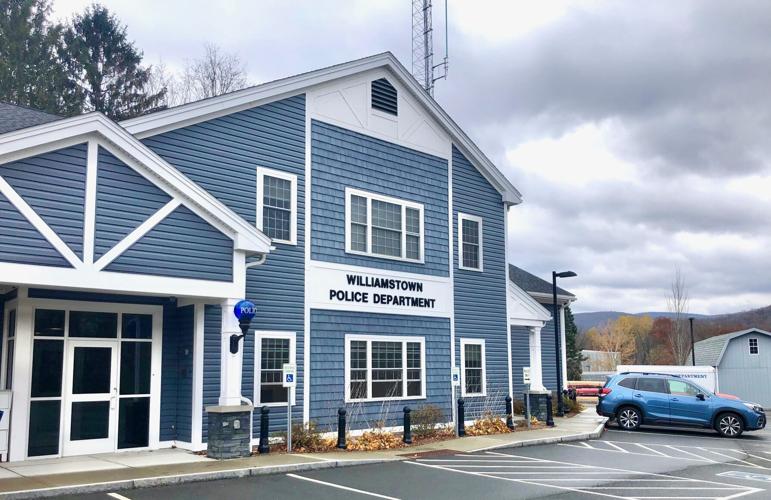 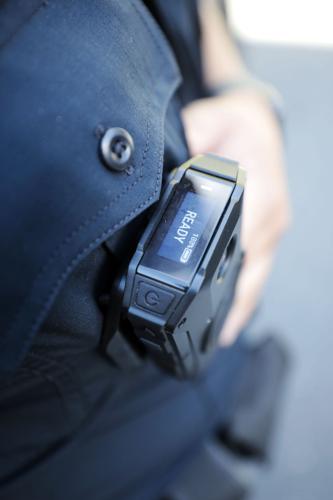 Great Barrington Police Officer Andrés Huertas turns on his new body camera on his uniform at the station in late September.

WILLIAMSTOWN — Interim Police Chief Mike Ziemba is working to launch use of body-mounted cameras for Williamstown police officers. Town officials back the effort, but at least one local critic of the department isn’t convinced the devices can address public concerns.

Body cams, as they are known, became more common, and controversial, in police departments around the U.S. following the murder of George Floyd by Minneapolis police in May 2020.

“In communities experiencing strained relations with the police, body cams provide another line of transparency and accountability. And they can provide critical evidence on calls and crimes.”

Like other communities, Williamstown became embroiled in a community debate over police conduct, amid allegations of misconduct in the department involving comments of a racial and sexist nature. Ziemba said that community tension was one of the reasons the department moved to adopt use body cams.

“In communities experiencing strained relations with the police, body cams provide another line of transparency and accountability,” Ziemba said. “And they can provide critical evidence on calls and crimes.”

He said the department’s officers support the initiative. “And I think the community is in support of doing this,” Ziemba said.

Ziemba said use of cameras is “low hanging fruit” and will advance transparency. “It’s an added process for the department, but to improve transparency and accountability, it’s something we’re willing to do,” he said.

For months, leaders within the Pittsfield Police Department have repeated the same message: Officers aren't opposed to body cameras. Now, concerns from the local police unions have halted a body camera pilot program. The unions won't say what those concerns are.

In Pittsfield, two officers’ unions have derailed a similar program launch there, without saying why they oppose the effort. Officers in Great Barrington are now using them.

Ziemba said discussions about the use of body cams began a few years ago in Williamstown. Officials have been examining their use and effectiveness since then.

The Massachusetts Executive Office of Public Safety and Security’s Law Enforcement Body Cam Task Force has been studying their use as well.

The office issued recommended policies. A sample of what one such requirement might look like can be found in a recent report. “Body Worn Cameras shall be activated whenever a user interacts with a member of the public,” the guideline notes. It cites examples of situations where it would be advisable to use the body cam, including during any contact that becomes adversarial.

Hugh Daley, chairman of the Select Board, backs the adoption of cameras.

“I think body cams can enhance police effectiveness and foster a better relationship with the community,” he said. “I believe this is further evidence of Chief Ziemba’s — and the whole department’s — commitment to increasing transparency and accountability at the WPD.”

“It’s a pretty well-tested piece of technology across the nation,” Daley said.

Jessica Dils, a town resident who has been active in seeking police reform in Williamstown, questions whether body cams will achieve much. Cell phone footage shot by citizens, she said, does more to isolate abuse and capture actions by police.

“Unfortunately, all of the money on updated equipment and reform in the guise of more public accountability for police misconduct has proven to be inadequate in doing just that,” she said by email, in response to questions. “Studies have shown that it is actually the engaged citizenry with their own cell phone footage that ends up being seen by the public in cases of police abuse and misconduct.”

“The vast majority of footage collected by police-worn body cameras is never seen by those same citizens or anyone outside the departments in which they reside,” she said.

Dils would rather see resources put towards deeper reform. “Dismantling the systems of oppression that exist — inadequate housing and healthcare, the criminalization of substance use and mental health crises, and economic instability — to create communities of care where public safety doesn’t depend on your life circumstance or identity.”

“I am supportive of the use of body cams as they are an important tool for maintaining community trust,” he said. “I also think they are a great tool for learning and ensuring effective delivery of services.”

He said he has no major concerns about their use. But rolling out the program will be difficult. “Implementing the effective use of body cams is complex, and we are committed to ensuring we have thoughtful policies and procedures in place when we implement them. We will do this through community input as well as working through the collective bargaining process.”

While the Williamstown crime rate is considered low, Ziemba noted that the department receives up to 18,000 calls for service every year.

Ziemba said body cameras, in general, can have the added effect of de-escalating a conversation, when both parties know they are being recorded. They can also document the tenor of the discussion, and which party is escalating the tone of an interaction. Data gathered on body cams can help also train officers on how to handle certain types of discussions and interactions with the public.

"Implementing the effective use of body cams is complex, and we are committed to ensuring we have thoughtful policies and procedures in place when we implement them."

Ziemba said he hopes to have the cameras in use early next year.

“That’s what they’re meant for — to make us better at what we do,” Ziemba said.

There are a number of guidelines under discussion that will be issued by the Massachusetts Executive Office of Public Safety and Security to advise police departments on the use of body cams.

The American Civil Liberties Union in Washington State conducted a study on the use of police body cameras. The study found that “while in a few high-profile cases, body camera footage has been used in trials that led to officer convictions, body camera footage is disproportionately used to prosecute civilians rather than officers,” the report notes. “One 2016 study found that 92.6 percent of prosecutors’ offices in jurisdictions with body cameras have used that footage as evidence to prosecute civilians, while just 8.3 percent have used it to prosecute police officers.”

The ACLU quoted another report that found body cameras are more likely to be used to clear officers of wrongdoing and lower litigation costs rather than hold officers accountable.

It's painfully ironic that smaller Berkshire towns seem to be lapping the county's most populous city — which has the most diverse citizenry and the largest police department — when it comes to seizing what Williamstown's interim police chief calls a "low hanging fruit" of simple transparency and accountability measures.