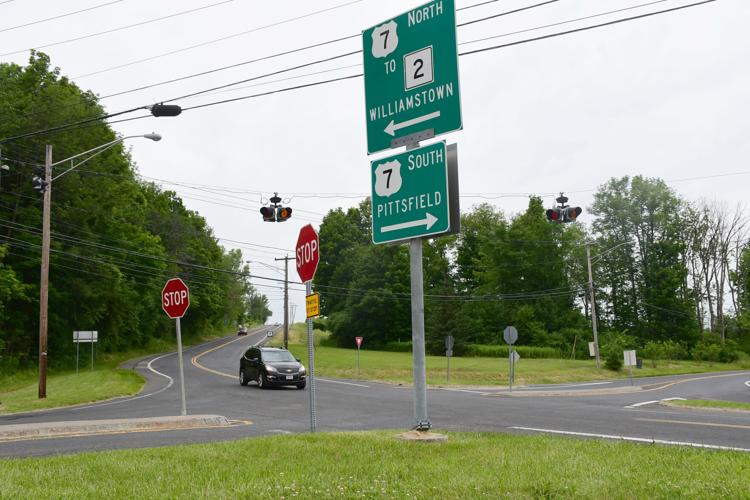 The hill north of the Five Corners intersection in South Williamstown is visible, just above the junction of routes 7 and 43. 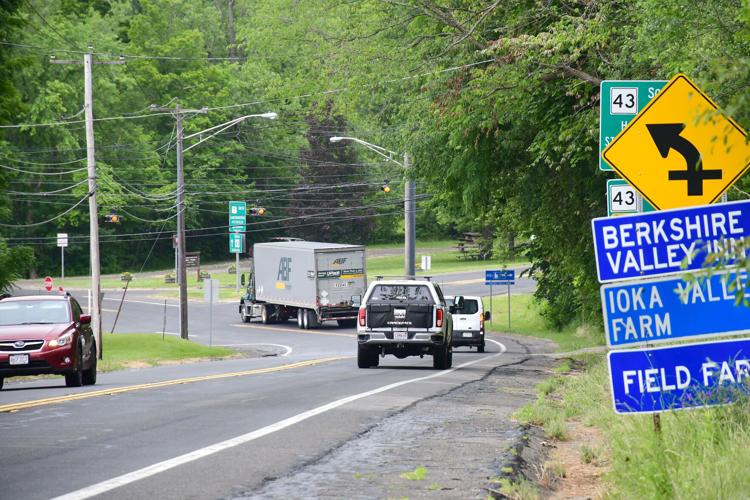 A view south from the Five Corners intersection in South Williamstown. The state Department of Transportation plans to create a roundabout at the junction, where routes 7 and 43 cross. 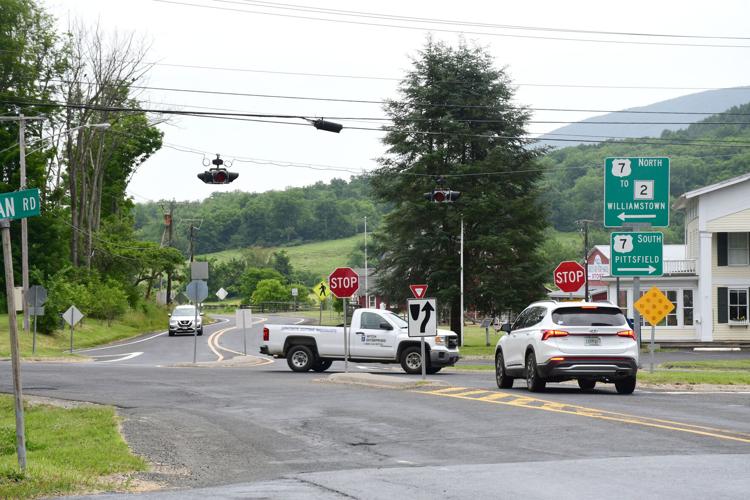 Plans call for the South Williamstown roundabout to be advertised in the 2023 federal fiscal year, which starts Oct. 1, with construction in the spring of 2024. This is the view east through the Five Corners intersection of routes 7 and 43.

WILLIAMSTOWN — People who travel through the historic Five Corners intersection in South Williamstown had more questions Tuesday about a plan to overhaul it.

But no major objections.

The state Department of Transportation convened a required “design public hearing” virtually. Here’s what came up:

• Concerns that the installation of a roundabout not compromise operations of a nonprofit store at the historic junction, which was added to the National Register of Historic Places in 1993. Representatives of the DOT told the roughly two dozen people listening that the project would not harm access to The Store at Five Corners or parking spaces there.

• Worries that the steep grade on Route 7 north of the intersection would cause backups, since vehicles will have slowed coming through the roundabout. The DOT said it would consider the addition of a climbing lane, but that would be a separate project with no timetable. One participant, Susan Schneski, urged the department not to create a climbing lane, saying, “We don’t need more pavement in this historic crossroads.”

• Since the area is viewed as the southern gateway to Williamstown, the state is offering to have the town opt to create special landscaping, or even the installation of public art — at the town’s expense.

STORY SO FAR: When the DOT unveiled plans for the roundabout, in January 2021, public reaction was mixed. The state argues that reworking the area, where routes 7 and 43 cross, will improve safety and improve the ability of pedestrians to cross near the store and reach Bloedel Park.

STORE ALLIES WEIGH IN: One written question came in from Corey Wentworth, the store’s operator. Wentworth asked how the construction would affect the ability of customers to come and go. Jonathan Freeman, the DOT’s project manager, said the store would not be affected — and that the shop would get “an exit directly into the roundabout.” Several people spoke up to say the store’s viability must not be compromised.

WHAT’S NEW: Since the 2021 hearing, the DOT has added a new pedestrian crossing, “aprons” that better accommodate larger vehicles and what the department called “a large strategically placed and designed curve on Route 7 southbound downhill approach, to reduce speeds of approaching drivers.”

WHY NEEDED: The state’s case for roundabouts always cites safety. Officials have estimated that with a roundabout, crashes at Five Corners would fall by 71 percent. And fatal and serious-injury crashes would decrease by 87 percent, due to slower vehicle speeds and the elimination of “T-bone” crashes.

• “The intersection remains challenging for drivers to navigate,” said Freeman, the DOT”s project manager. “Roundabouts physically result in slower speeds and allow drivers to only focus on one traffic stream at a time.”

• The junction saw 1.52 crashes per million entering vehicles from 2013 to 2017, Freeman said. The department said last year that this period saw 20 traffic accidents with three injuries and one fatality. Four were head-on crashes. The crash rate is triple the statewide average crash rate at intersections without traffic signals.

WHAT COMES NEXT: The state DOT’s right-of-way unit must obtain easements. Comments offered Tuesday urged the DOT to limit the amount of land taken. Plans call for the job to be advertised in the 2023 federal fiscal year, which starts Oct. 1, with construction in the spring of 2024.

• No other hearings are required. But a DOT official expressed a willingness to hold a less formal forum on how the intersection might be treated as a “gateway” through unique landscaping or use of public art.

• If future problems suggest a climbing lane is needed north of the intersection, Mark Moore, a staffer at the DOT’s Lenox district office, pledged to speak up about it.

“I just want everyone to know I heard loud and clear about the climbing lane,” Moore said. “I would like people to know that I drive this intersection every day and I am very aware of this climbing issue. I assure everybody, I’ll be the first to complain if it really becomes a problem.”

WHO’S PAYING: At the 2021 hearing, a DOT spokeswoman estimated the project expense at $1.5 million. On Tuesday, the department pegged the cost at $3.1 million. Eighty percent of that would be covered by the Federal Highway Administration. The remaining fifth would be paid by the DOT.

• The project must still advance on the statewide Transportation Improvement Program list.