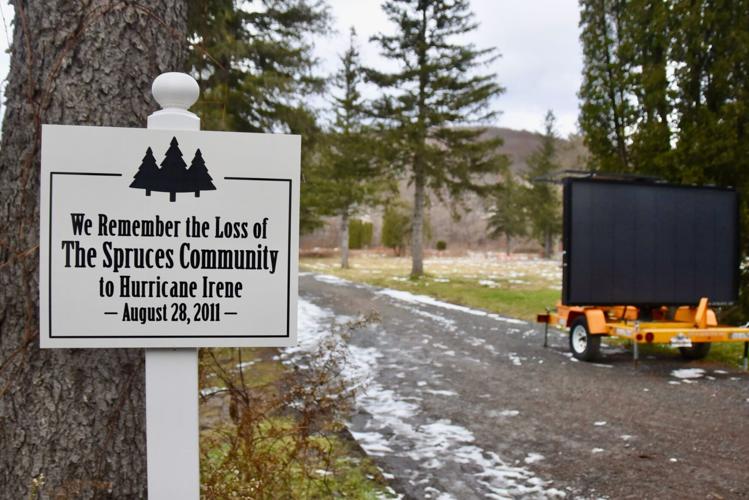 Town officials are seeking community input on proposed plans for playing fields and other installations at The Spruces in Williamstown. 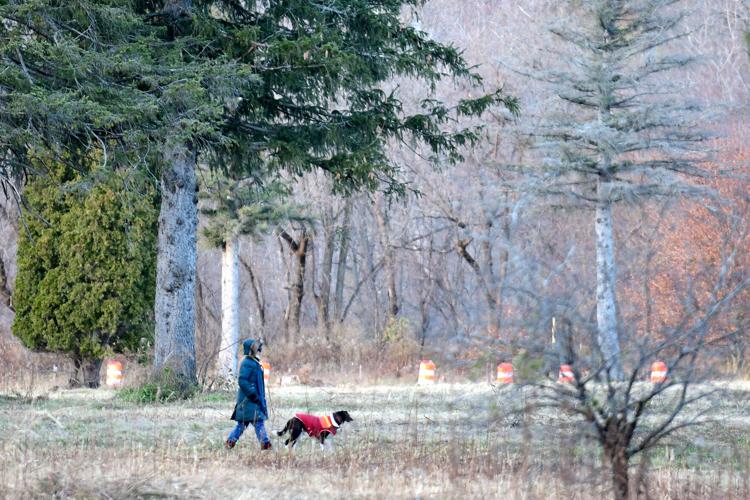 A woman walks her dog at The Spruces in Williamstown in late November. Pending changes include the possible installation of a couple of playing fields for youth soccer and lacrosse, as well as an off-leash dog park, a pollinator garden and the restoration of some wetland vegetation. Several picnic lawns and a community field also are in play.

WILLIAMSTOWN — It’s time to chime in.

Town officials are evaluating recommendations for improvements at The Spruces, but they want to hear from community members by Dec. 13, before they move ahead.

Changes include the possible installation of a couple of playing fields for youth soccer and lacrosse, as well as an off-leash dog park, a pollinator garden and the restoration of some wetland vegetation. Several picnic lawns and a community field also are in play.

Some of these features exist, but they would be formalized in all three options. And by the end of next summer, the new Williamstown hike/bike trail also will pass through the park.

“We’ve been talking about The Spruces for a while now,” said Andrew Groff, director of community development in Williamstown. “And with the bike path coming through, it seemed like time to take the next step.”

The improvements are largely low-impact. Tropical Storm Irene flooded the area and drove out more than 300 residents of the former mobile home park in 2011. The Federal Emergency Management Agency money that helped pay for the cleanup afterward restricts the installation of pavement or any other below-ground permanent improvements that could be damaged in a flood, as the entire park lies in a flood plain.

The town owns 115 acres in the area, which includes The Spruces, the cornfields and the trails along the river that wind up at the tennis courts along Liner Park. The park itself is about 44 acres.

Since then, The Spruces has become a popular location for passive recreation such as walking, jogging and, especially, dog walking. As a result of the proposed reconfigurations, a few of the existing walking paths will be retired.

All three options drawn up by consultant Regenerative Design Group locate the improvements at the southern sector of the park, away from the path of the Hoosic River, which flows along the park’s northern border.

Groff noted that the town left the park alone, letting the residents use it as they liked, which the town watched while considering how best to use the parcel.

“Now, we’ve reached a reflective point, to think about how the park will evolve with the bike path coming through,” Groff said.

Most of the northern section of The Spruces has to remain open to serve as flood plain functionality, basically as a safe place for the high water to go during a flooding scenario without damaging infrastructure or other structural features of developed areas.

One of the goals is to use the park for passive recreation and ecological restoration of the areas adjacent to the river, such as replacing invasive vegetation with native growth.

But, the southern section of the park, is further from the riverbank, allowing for more intense usage, such as youth playing fields, which the town needs badly. A community field also is proposed, primarily to allow townwide outdoor activities, such as the recent Night Out celebration.

Michael Williams, executive director of the Williamstown Youth Center, which is adjacent to the Williamstown Elementary School playing fields, said additional fields would be “a huge help.”

Williams noted that the elementary school fields are the “only game in town,” and that they often are overbooked. With so much activity on the fields, they are also hard to maintain.

“We have more than one sport competing for field space at the same time,” Williams said. “It’s a little bit challenging when you’ve got lacrosse balls flying through a baseball game.”

He noted that there are several hundred Williamstown children involved in youth sports.

Maxine Ng, a Williams College student who served as an intern at Town Hall, was tasked with talking to folks using The Spruces over the summer to see what they did there and why they enjoy the space.

“Most people have been using The Spruces as a place to walk their dogs or go on walks,” she said. “The people who would go on walks were usually those of the older generation, citing that the flat terrain and natural setting was very enjoyable.”

Ng noted that volunteers already had created the Pollinator Garden near the pond in the front of the park. Other uses included bird-watching, relaxing, bike riding, cross-country skiing and ice skating on the pond, accessing the river, fishing, picnicking, running and removing invasive plants.

The number of visitors varies by hour.

“Early in the morning and after work is when the park is at its peak, with more than 20 cars in the parking lot within one hour,” Ng said. “The number of people in each car is usually between one to threee, and there are many people who come to The Spruces in pairs. It was pretty popular in the summer, even on rainy days.”

She sought opinions from folks on what the park should offer in the future.

“A large proportion of people expressed interest in leaving the park the way it is, or planting more native species of plants to increase the resiliency of the ecosystem, and many are excited about the bike path that is currently under construction,” Ng said.

Others also hope for better access to the river and better restrictions for cars. There also were some people who had strong views on having playing fields or other athletic facilities in the park.

Based on feedback, town officials will work to incorporate preferred improvements to allow for popular activities at The Spruces. Groff noted that with the new infrastructure bill, there likely will be grant money that could help pay for the project. The time frame for completion is undetermined, with several steps to complete before timing can be determined.