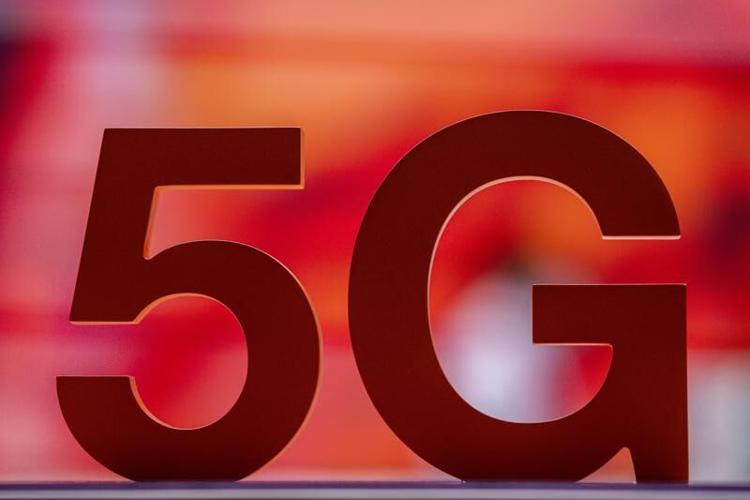 Sheffield residents and activists have filed a petition with the town for a moratorium on 5G wireless installations until the higher radio frequencies they emit are proven safe. But outsmarting federal telecommunications law could prove difficult. It wrests control from local governments where matters of health and the environment are concerned. 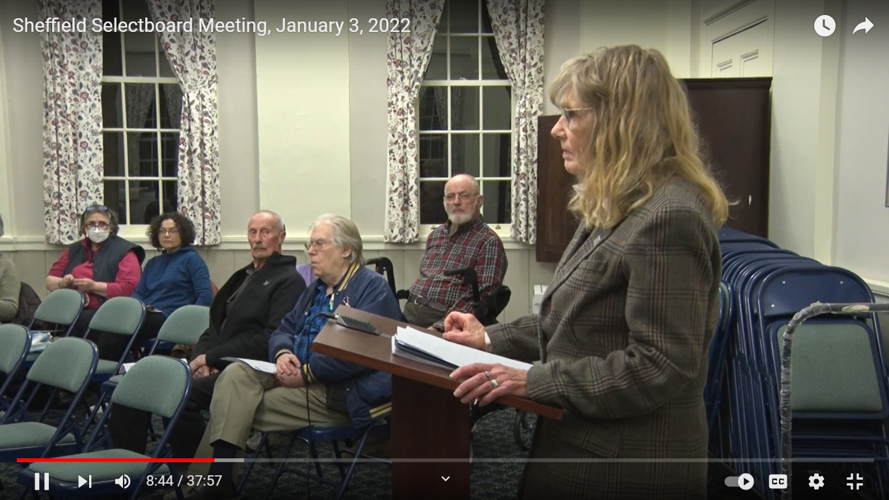 Nina Anderson, president of The Scientific Alliance for Education, or S.A.F.E., speaks to the Sheffield Select Board about the petition for a moratorium on 5G rollouts until the technology is deemed safe.

SHEFFIELD — A group of residents and activists are trying to block 5G wireless systems from installation in town until research deems emissions from the newer technology safe for people as well as flora and fauna.

“We’re not saying [5G is] a bad thing. The FCC has not proven that this is safe for humans and especially our agricultural communities in Sheffield. It’s like smoking. Everyone was smoking back in the dark ages and the tobacco companies would never do studies.” S.A.F.E. President Nina Anderson

They say current federal safety standards for exposure are outdated and don’t apply to the higher 5G — or fifth-generation — levels of radio frequency radiation.

But the town might not legally be able to stop what the federal government allows the telecommunications industry to do.

Lawyers who fight cell towers and antennas, however, say that's not the case — that well-written local codes can halt installations. 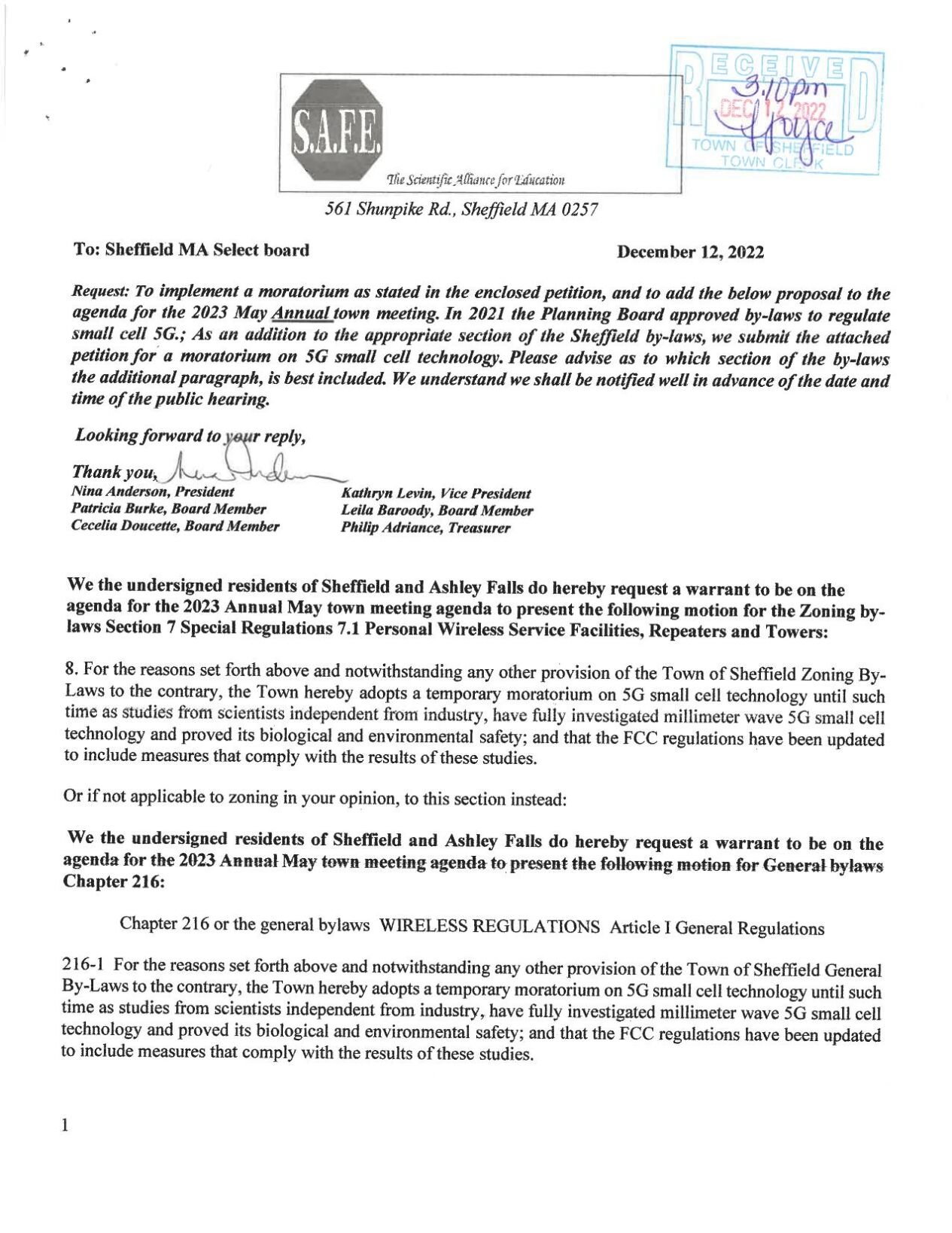 The Sheffield-based Scientific Alliance for Education, or S.A.F.E., presented a petition to the Select Board on Tuesday asking that the question of a moratorium on millimeter wave 5G small cell technology be placed before voters at annual town meeting in May.

The petition asks for the pause until the Federal Communications Commission updates its limits for radiation exposure based on the results of specific research on 5G radiation “from scientists independent from industry.”

“We’re not saying [5G is] a bad thing,” S.A.F.E. President Nina Anderson said. “The FCC has not proven that this is safe for humans and especially our agricultural communities in Sheffield. It’s like smoking. Everyone was smoking back in the dark ages and the tobacco companies would never do studies.”

S.A.F.E. Vice President Kathryn Levin told the board that potential liability to towns looms “if someone gets sick.”

Just look at what happened in Pittsfield over a cell tower — not 5G — that 17 residents say has harmed them, she said.

The petition, signed by 29 residents, will have to be rewritten and resigned to ensure its legality as a warrant item, both the board and the petitioners agreed at the board’s Tuesday meeting, since the town’s attorney had some concerns about how it was drafted.

There could be bigger problems. Sheffield might not have a say in the matter, according to the town’s counsel, said Town Administrator Rhonda LaBombard. The federal government won’t allow the town to regulate telecommunications infrastructure “based off of environmental issues or the effects of radiofrequency,” she added.

Not so, say activists and lawyers. They say the 1996 federal law only applies to what are essentially phone calls — not broadband, which is how 5G is classified.

There are currently 23 5G nodes scattered across Berkshire County, according to Ookla’s interactive 5G map. One of those is in Sheffield, behind the fire station.

Campaigns to pause 5G rollouts are afoot around the state, the U.S. and other countries as activists and scientists worry about the effect on people of higher radio frequencies above 6,000 megahertz.

The technology uses higher levels of radio frequencies to speed the flow of data. Some scientists reviewing studies of possible health effects of the higher frequencies found little evidence of diseases and other health issues; other scientists have banded together to raise their concerns, given existing research like a long-term study by the National Toxicology Program, a branch of the National Institutes of Health, that found "clear evidence" that non-5G levels of cellphone radiation caused tumors in lab animals.

As a result of what is known and unknown, more than 7,300 scientists worldwide have signed a petition to pause 5G rollouts, among other petitions.

The concerns have also resulted in a handful of bills in the Massachusetts Legislature to study 5G’s health effects or to reduce all wireless radiation, particularly for children.

The health question and a larger battle over radio frequency emissions — not 5G — is still playing out in Pittsfield, where at least 17 residents who say they were sickened by a cell tower near their homes took legal action against the city.

In Lenox, health concerns squashed a plan to place a wireless antenna atop the low-income elderly housing at the Curtis. The town is still trying to close a gap in cell service downtown, yet Lenox voters also killed a wireless bylaw last month that they felt would not adequately protect them.

The Sheffield petitioners point to evidence the FCC isn’t concerned with health risks. They refer to a Harvard Ethics Report that found the FCC to be a “captured agency” that tells local governments, "Just Don't Bring Up Health" when considering equipment licenses. It's essentially what LaBombard said at Tuesday's meeting.

The nonprofit Environmental Health Trust, which submitted a letter to the Sheffield board in support of a temporary moratorium, sued the commission over allegedly ignoring two decades of information in its decision-making over radiation exposure limits. 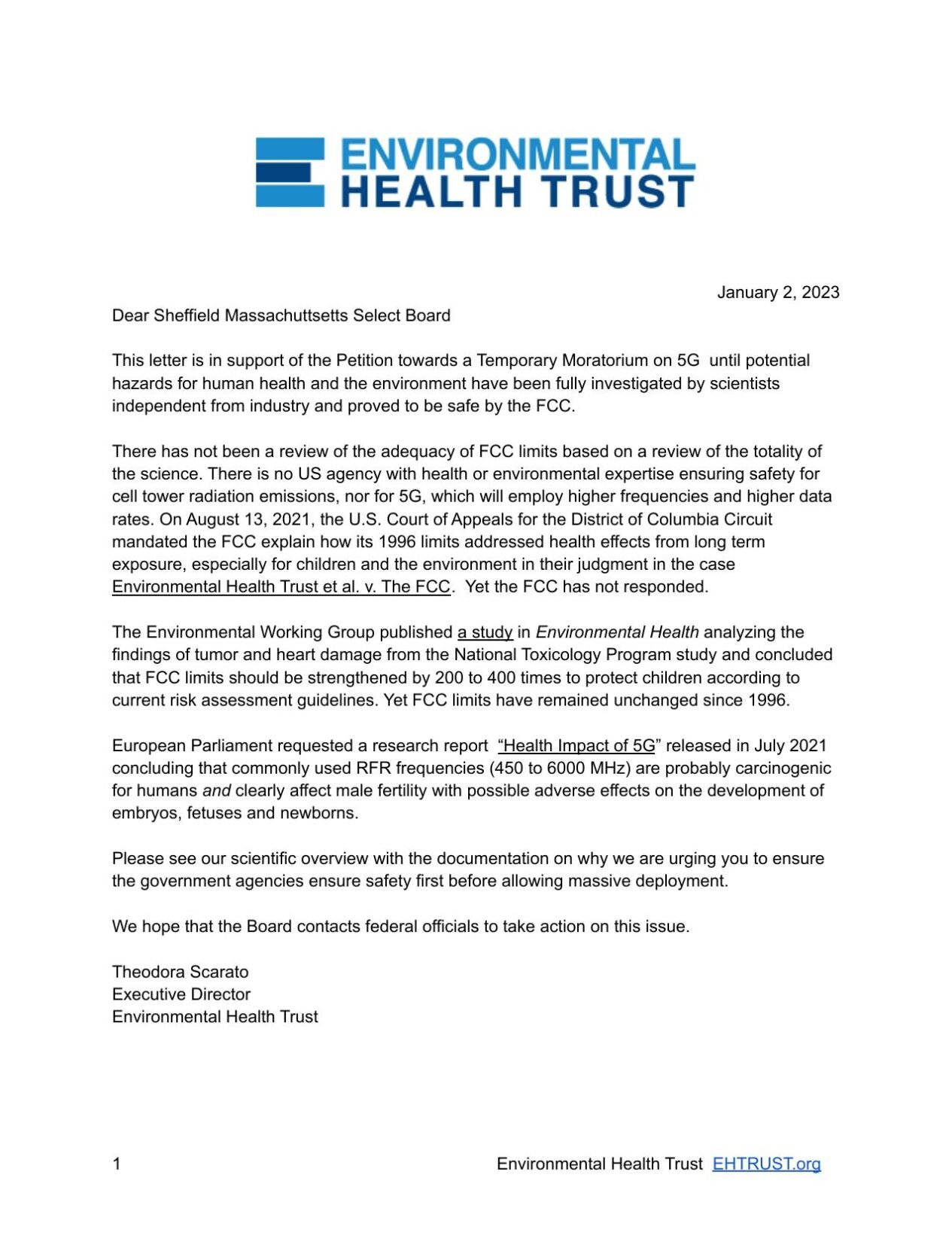 In that 2021 lawsuit, a federal appeals court found the FCC’s negligence “arbitrary and capricious.” The court also slammed the FCC’s reliance on the Food and Drug Administration’s position that the technology is safe, saying the FDA also had “unexplained disinterest in some similar information.”

“One agency’s unexplained adoption of an unreasoned analysis just compounds rather than vitiates the analytical void,” the opinion says. “Said another way, two wrongs do not make a right.”

It is also unclear who is responsible for regulating emissions. The FCC admits on its website that it does not “routinely monitor radiofrequency radiation” from transmitters because it “does not have the resources or personnel.”

“In addition, the FCC does not routinely perform RF exposure investigations unless there is a reasonable expectation that the FCC exposure limits may be exceeded,” the website says.

The FCC did not respond to a request for comment.

‘I get calls every day’

The Sheffield Planning Board created a bylaw for small wireless like 5G, but the town’s attorney tossed it back to the Select Board, saying it wasn’t a zoning matter — rather a general bylaw, said Select Board Chair Rene Wood at Tuesday’s meeting.

It’s not easy to write a bylaw that will withstand the federal Telecommunications Act of 1996, says Andrew Campanelli, an attorney who specializes in writing such code for municipalities across the U.S. He says it takes a deep understanding of the federal law and various cases for towns to fortify themselves against 5G nodes or other equipment located too close to homes — or else be targeted by company contractors as easy pickings.

“I get calls every day,” said Campanelli, whose firm is based in Merrick, N.Y., referring to town officials trying to beef up protection from ill-placed cell towers or antennas.

“If they get a sophisticated site developer [they] will basically just run roughshod over them, and if they have the audacity to turn them down, they’ll sue you in federal court and they win every single time,” he added.

With a 5G moratorium, other legal tangles might ensue over a company’s right to have a municipal decision on an application made within a certain amount of time.

Some Berkshire officials aren’t convinced that 5G is or will be a problem. Take Great Barrington’s Planning Board, which isn’t addressing 5G in its zoning laws — not yet, anyway.

“I am not aware of scientific literature from NIH, WHO or other reputable sources that provides actual evidence of health risks from 5G,” said board Chair Brandee Nelson.

Our Opinion: Another cell tower spat underscores the need to back up local officials with a better, modern regulatory framework

Even as we view the more strident cell tower health concerns with skepticism, this status quo is unfair to concerned citizens and unhelpful for the local officials trying to do right by those constituents.