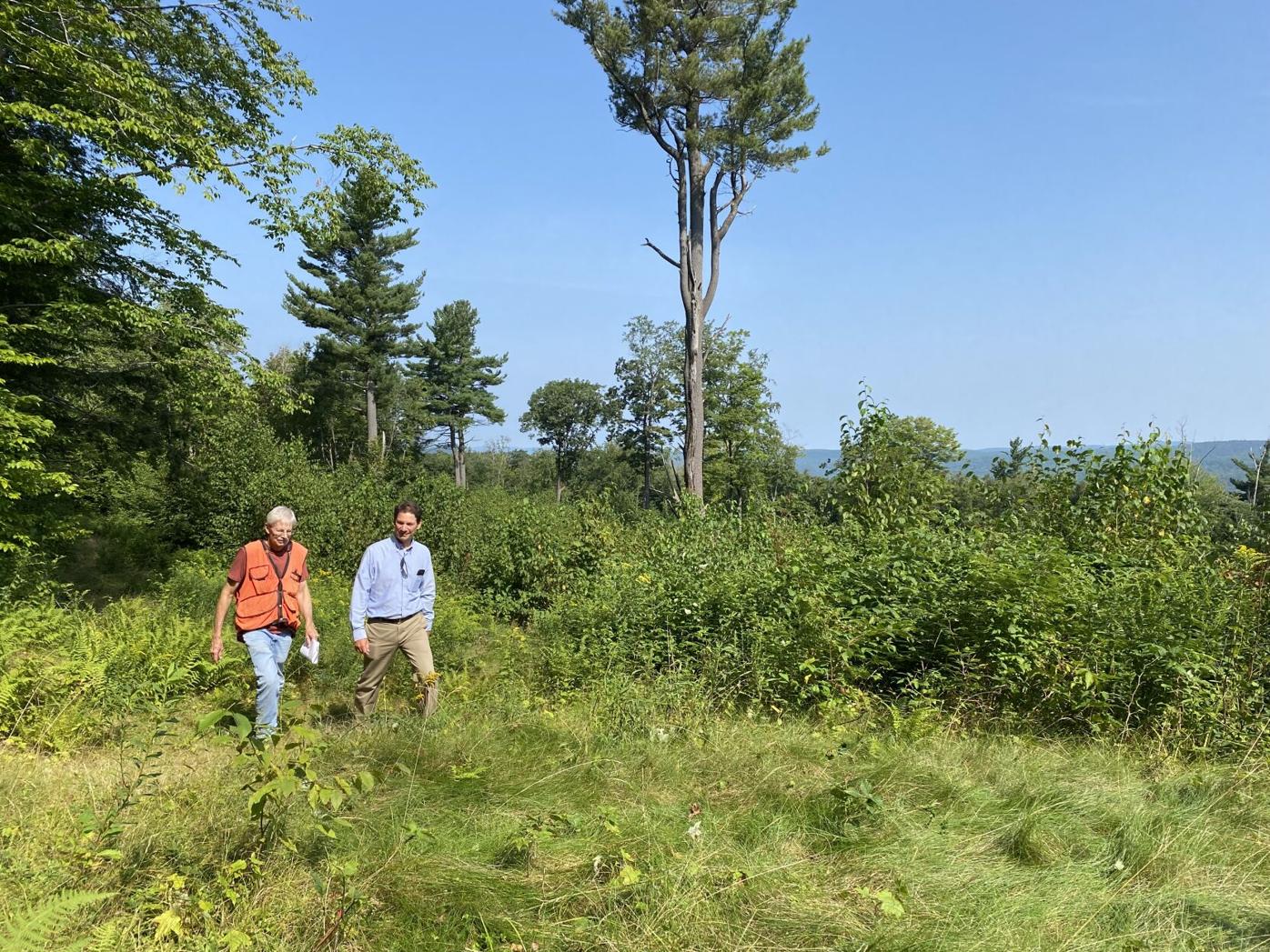 Peter Tucker, left, and Jonathan Sylbert take part in a recent excursion at Mount Hunger in Monterey. The Monterey Preservation Land Trust, which owns a 383-acre mountain preserve there, is working with the Massachusetts Division of Fisheries and Wildlife to create young forest habitat to support the New England cottontail. The men are in one of two 15-acre patches of young forest. 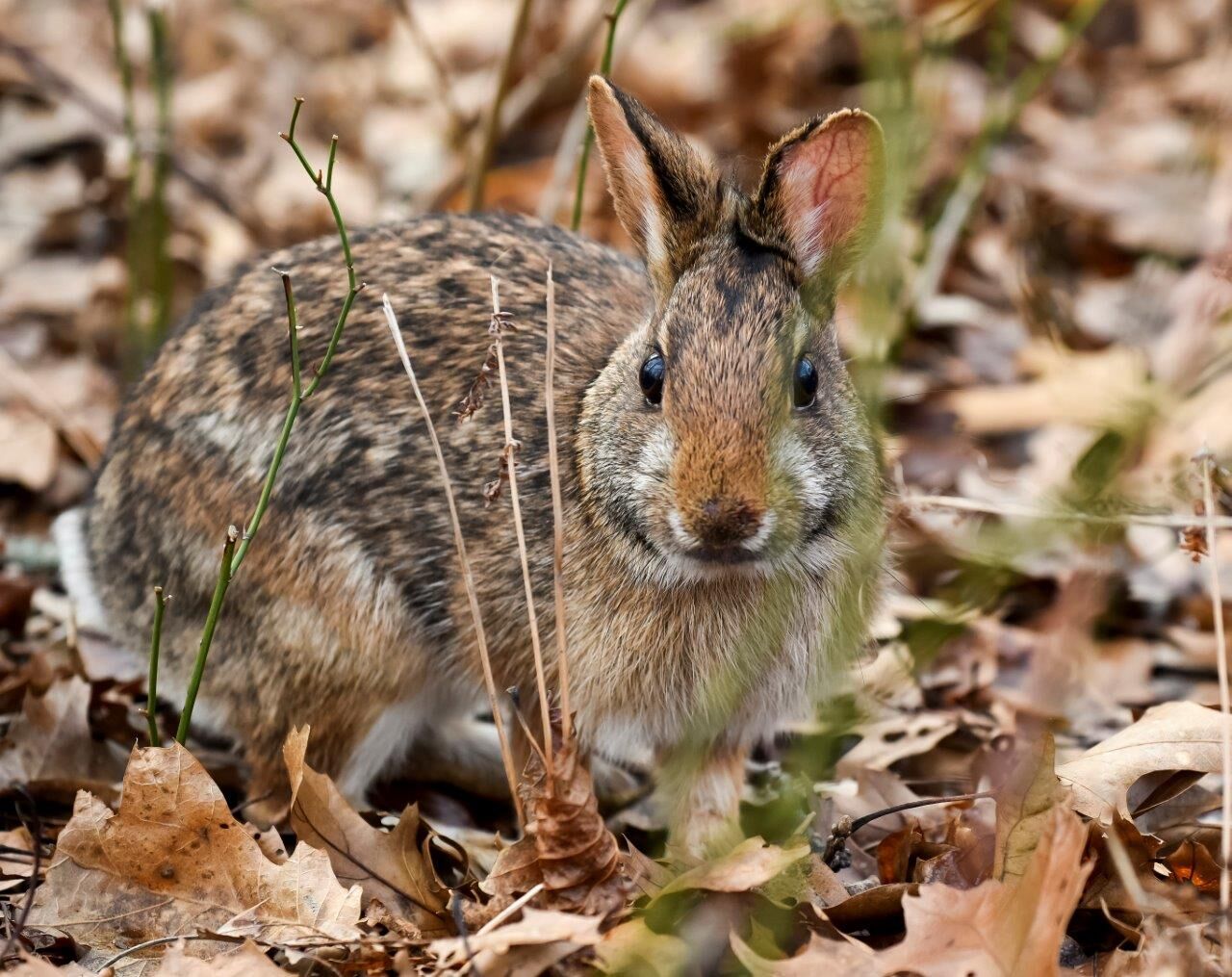 The once-common New England cottontail, pictured, is a little smaller than the more common nonnative Eastern cottontail. Efforts are underway in Monterey and elsewhere in New England to save the native species. 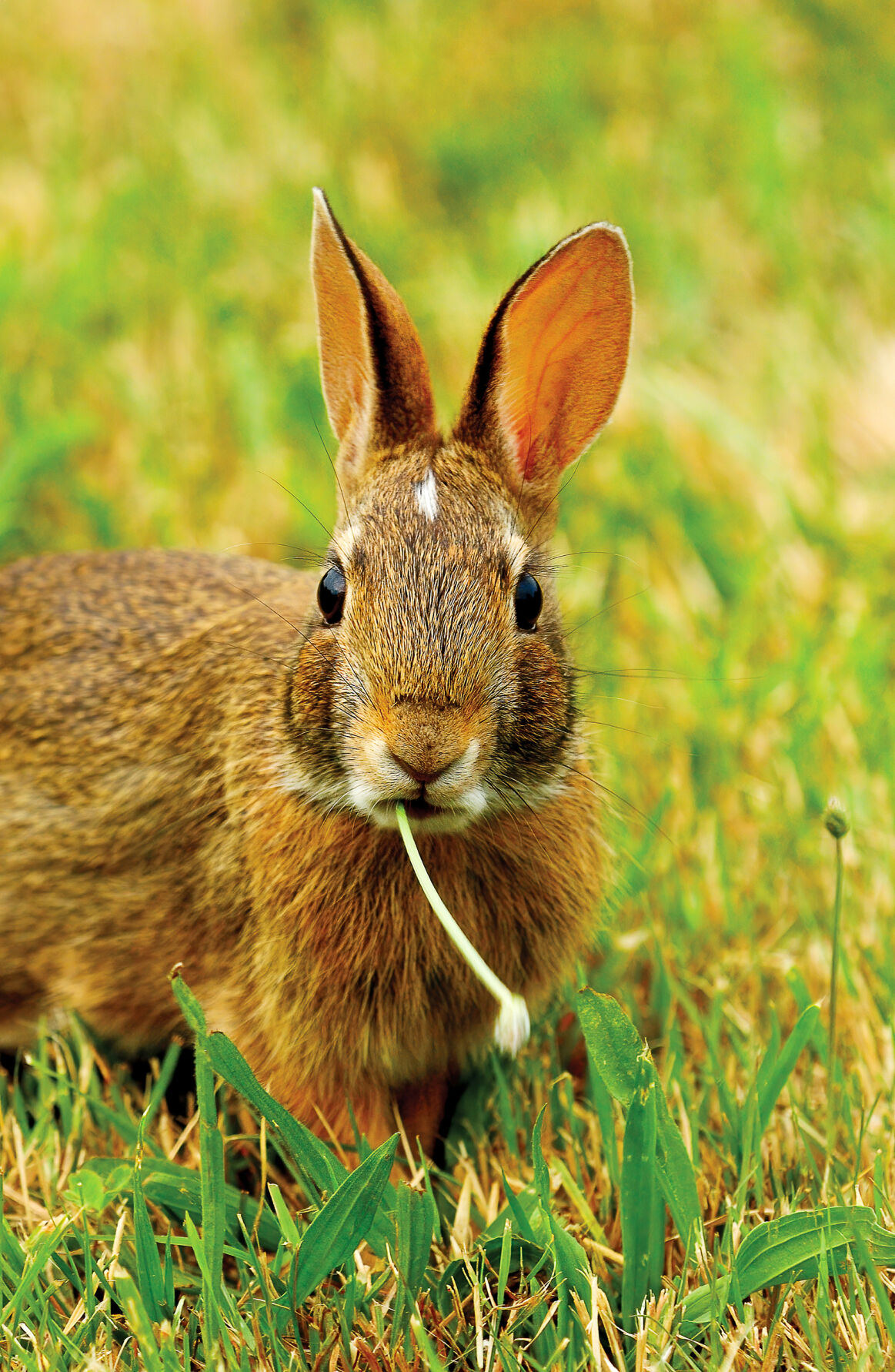 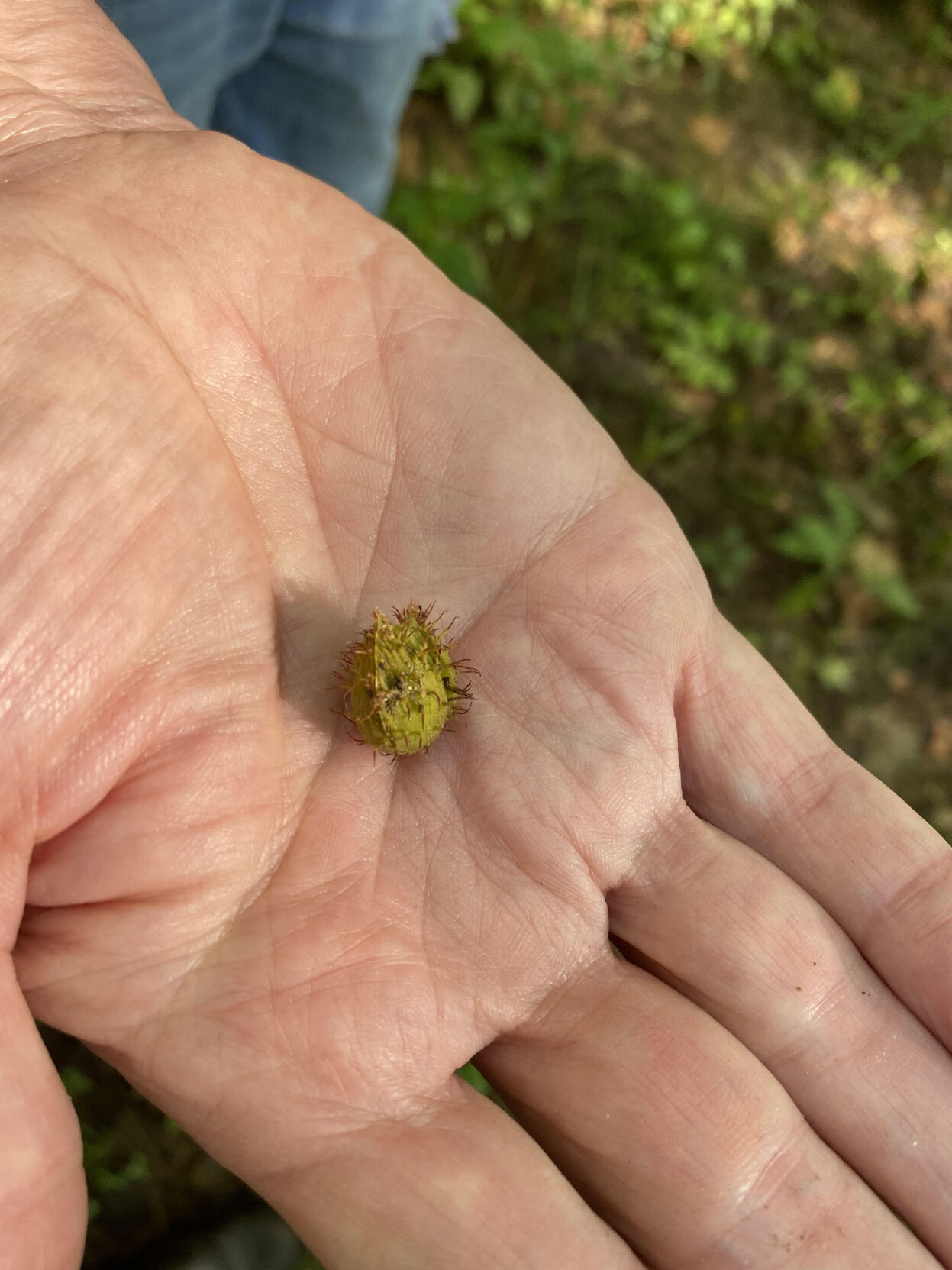 Peter Tucker holds a promising sign of things to come: a beechnut from a young tree.

MONTEREY — On a ragged hillside here, sunlight now shines where it hasn’t in 60 years, and with it, the birth of a young forest: tree saplings, sedge and berry bushes all emerging in shoots of green astonishment.

And coming soon, if they find their way here: New England cottontail rabbits.

Wildlife biologists say the native rabbit has dwindled to the point of consideration for protection under the Endangered Species Act. But, before they push for that, they have an idea, and that idea is having its day here in Monterey.

Hikers walking the 383-acre Mount Hunger preservation here might be startled to discover that two sections of the otherwise thickly forested hilltop, each about 15 acres, appear to have been struck by a violent tornado or hurricane. Yet, the prime movers in this case are humans with good intentions and a lot of science to back them up.

In the thousands of years that New England cottontails have inhabited the region, they have relied almost exclusively on the safety and sustenance provided by dense shrubs, brambles and tree seedlings indicative of young forests. And today, in New England, there isn’t much young forest left.

Why all the fuss?

“We tell people, if you have a rabbit in your yard, it’s not likely to be a New England cottontail, because they don’t really go out in the open,” said Marianne Piché, habitat biologist for the Massachusetts Division of Fisheries and Wildlife.

“We tell people, if you have a rabbit in your yard, it’s not likely to be a New England cottontail, because they don’t really go out in the open.”

— Marianne Piché, habitat biologist for the Massachusetts Division of Fisheries and Wildlife

Indeed, most rabbits seen around these parts are Eastern cottontails, brought to this area in the hundreds of thousands in the early 1900s from Western states and released for sport hunting.

The Eastern and New England rabbits are grayish-brown. The Easterns tend to be a bit larger. The natives — they also are called brush rabbits, woods rabbits or coneys — often have a small black spot on their forehead; about half of all Eastern cottontails have a white spot. Biologists believe that they don’t interbreed, but that they might compete for habitat.

Unlike their Eastern counterparts, New England cottontails exclusively are brush dwellers. Part of the blame for their bashfulness rests with genetics, namely, the placement of their eyes. Their eyes — they are set lower on the sides of their head, relative to the Eastern cottontail — have not served them well as New England’s landscape dramatically has transformed over the past century because of suburban sprawl and the maturation of once-young forests.

With those eyes, New England cottontails can’t spy predators overhead. Therefore, in open fields and on manicured lawns, they become easy pickings for aerial predators such as hawks.

Tucker and Jonathan Sylbert, the president of the Monterey Preservation Land Trust, led a recent excursion at Mount Hunger to explain and showcase this project that has been seven years in the making and that has everything to do with providing safe haven to the only rabbit native to New England.

Reasons to be hopeful

Hiking in from a small, unmarked pull-off on Tyringham Road, they led the way along a woods road that once had a name: Barnes Road. It’s a mulish, rocky byway dotted by evidence of long-gone human habitation in the form of cellar holes, which straggle off like an ellipsis of private reconsiderations.

That old road now provides access to what the land trust has labeled “Patch A” and “Patch B.”

Through a $30,000 grant applied for by the land trust and received through the U.S. Department of Agriculture’s Natural Resources Conservation Service, the land trust hired a logger to remove most of the tall trees within the two patches.

Overseeing the project on behalf of the New England cottontail is Piché, the habitat biologist working for the state under partnership with the Natural Resources Conservation Service. She says there are many reasons to be hopeful that the project will be successful.

Monterey is among eight towns in Western Massachusetts that state and federal wildlife experts have named as “focal areas” crucial to the survival of New England cottontails. In addition to Monterey, the focal area consists of the contiguous towns of Granville, Tolland, New Marlborough, Sandisfield, Otis, Becket and Blandford.

Monterey is among eight towns in Western Massachusetts that state and federal wildlife experts have named as “focal areas” crucial to the survival of New England cottontails. In addition to Monterey, the focal area consists of the contiguous towns of Granville, Tolland, New Marlborough, Sandisfield, Otis, Becket and Blandford.

These towns are joined loosely with towns in northwestern Connecticut and eastern New York to form one of several New England cottontail subpopulations, each isolated from one another by urban and suburban development. The other subpopulations are in eastern Connecticut and southern Rhode Island; Cape Cod; the Merrimack River Valley in New Hampshire and Massachusetts; and southern Maine.

In Western Massachusetts, Piché said, New England cottontails most recently (in 2019 and 2020) have been identified in New Marlborough, Monterey and Great Barrington, near the Monterey line.

What makes the preserve at Mount Hunger an ideal location is its northeastern border. The preserve runs adjacent to the corridor of lightly maintained rights of way used by the Tennessee Gas Pipeline Co. Much of that land typically contains the sort of dense understory that rightly can be called young forest.

Native cottontails likely live along that pipeline corridor, said Tucker, and the fresh young forests of Mount Hunger are well within range for cautious young cottontails looking to disperse. By linking one habitat to another, the Mount Hunger project provides a textbook case for a key strategy devised in recent years to increase the native cottontail population.

From 2006 until 2015, the U.S. Fish and Wildlife Service classified the New England cottontail as a “candidate species” for protection under the federal Endangered Species Act. But, state biologists teamed with Fish and Wildlife and the USDA to address the threats and devise a conservation plan that would sidestep the listing. That plan includes encouraging habitat restoration on public and private land.

With a plan in place, the Fish and Wildlife Service determined in September 2015 that the New England cottontail population might recover without the formal protection of the Endangered Species Act. In total, the plan identified 27,000 acres capable of supporting 13,500 New England cottontails throughout their current range.

To reach that level of success will require buy-in from private landowners, Piché said. The six states with identified focal areas all have begun outreach to private landowners and land conservation groups. Also, the New England Cottontail Regional Technical Committee has released a land-management manual.

In the meantime, MassWildlife owns one wildlife management area in the Western Massachusetts focal area. That’s the 1,200-acre Farmington River Wildlife Management Area, which straddles Becket and Otis. MassWildlife created a 55-acre clearing there from 2014 to 2016. That land now is a young forest.

In Monterey, the first of its two patches was created beginning in 2014. The second patch was completed last year.

“This is exactly what we were hoping to see,” Tucker said as he walks amid fresh young forest on Mount Hunger. He points out young blackberry and raspberries bushes, native sedge and tiny oak, birch and beech saplings, all of which are perfect cover and food for native cottontail.

At Mount Hunger, the opening of the patches also has resulted in the creation of better-delineated hiking trails. Sylbert invites the public to come and take a look. Trails wrap along the two newly created young forests and afford distant views of the hills to the north.

Tucker and Sylbert note that even if the New England cottontail doesn’t find its way here, other species that benefit from young forest likely will, including game birds like the ruffed grouse and American woodcock; bobcat; moose; garter snake; and songbirds like the Eastern towhee, blue-winged warbler and white-throated sparrows.

Tucker and Sylbert note that even if the New England cottontail doesn’t find its way here, other species that benefit from young forest likely will, including game birds like the ruffed grouse and American woodcock; bobcat; moose; garter snake; and songbirds like the Eastern towhee, blue-winged warbler and white-throated sparrows.

The cutting was done purposefully, such that some older trees were left behind that have, or that might develop, shelter in the form of cavities for use by a variety of denning creatures. In addition, logs have been left on the ground with the intention that they might become so-called drumming logs for male ruffed grouse which, in springtime, prefer to stand upon a high spot and beat their wings loudly to attract a mate.

Still, Piché said it’s very likely that New England cottontail will discover these locations. She will be able to tell in the coming years through DNA analysis of fecal pellets. Yes, that’s part of the job.

The future plan for these properties and several else like them in neighboring states is to continue to manage them.

“You’d come back maybe on a 10- to 15-year cycle to create a new patch and keep it going,” Tucker said. “And from a management point of view, it makes sense. It takes a few years after the cutting to get enough density to be attractive to New England cottontail, and then there’s 10 years, maybe more, of utility in that density before it gets to the tall-sapling stage that’s no longer conducive.”

One-fifth of its range is left

Only about 13,000 native cottontails remain, according to the conservation group New England Cottontail. That group has estimated that the remaining population is limited to one-fifth of its historic range.

Piché said wildlife biologists agree that the native rabbit is in a steep decline.

“People started to take notice of this in the early 1960s, as with other species that use young forest habitat across the Northeast,” she said.

Before European settlement, young forests were formed after natural occurrences such as wildfires, flooding, ice storms, insect outbreaks and hurricanes, she said.

“We’ve since minimized these natural occurrences by suppressing them or through development in locations where they historically created young forest habitat,” she said. “What we’re doing by managing is mimicking those disturbances in a sense, or emulating those disturbances, and creating it where we can or in areas where species with limited dispersal capabilities, such as New England cottontail, occur.”

Piché said the reason people should care about any of this is because the New England cottontail, whose range extends from east of the Hudson River in New York through the New England states, is a part of our natural history.

“With this particular species,” she said, “this is the only place on Earth that they occur, or have ever occurred.”

A callout to landowners

Efforts to save the New England cottontail rely significantly on private landowners, particularly those with enough acreage that might be suitable for the establishment of young forest habitat.