BECKET — Proponents of a large outdoor cannabis farm in Becket will outline a revised plan to town officials Wednesday, restarting a debate that drew opposition from residents of two neighborhoods when it surfaced earlier this year.

TetraHydra AgTek LLC is seeking a special permit from the Becket Planning Board to create the largest kind of outdoor growing facility allowed by the state Cannabis Control Commission. The farm would be located on a tract north of Quarry Road off Bonny Rigg Hill Road, about a half mile above the Massachusetts Turnpike.

While the company’s leaders say it is ready to be a good corporate citizen, a group of Becket residents has been working for months to combat a project they believe will produce unwanted smells from outdoor cultivation. 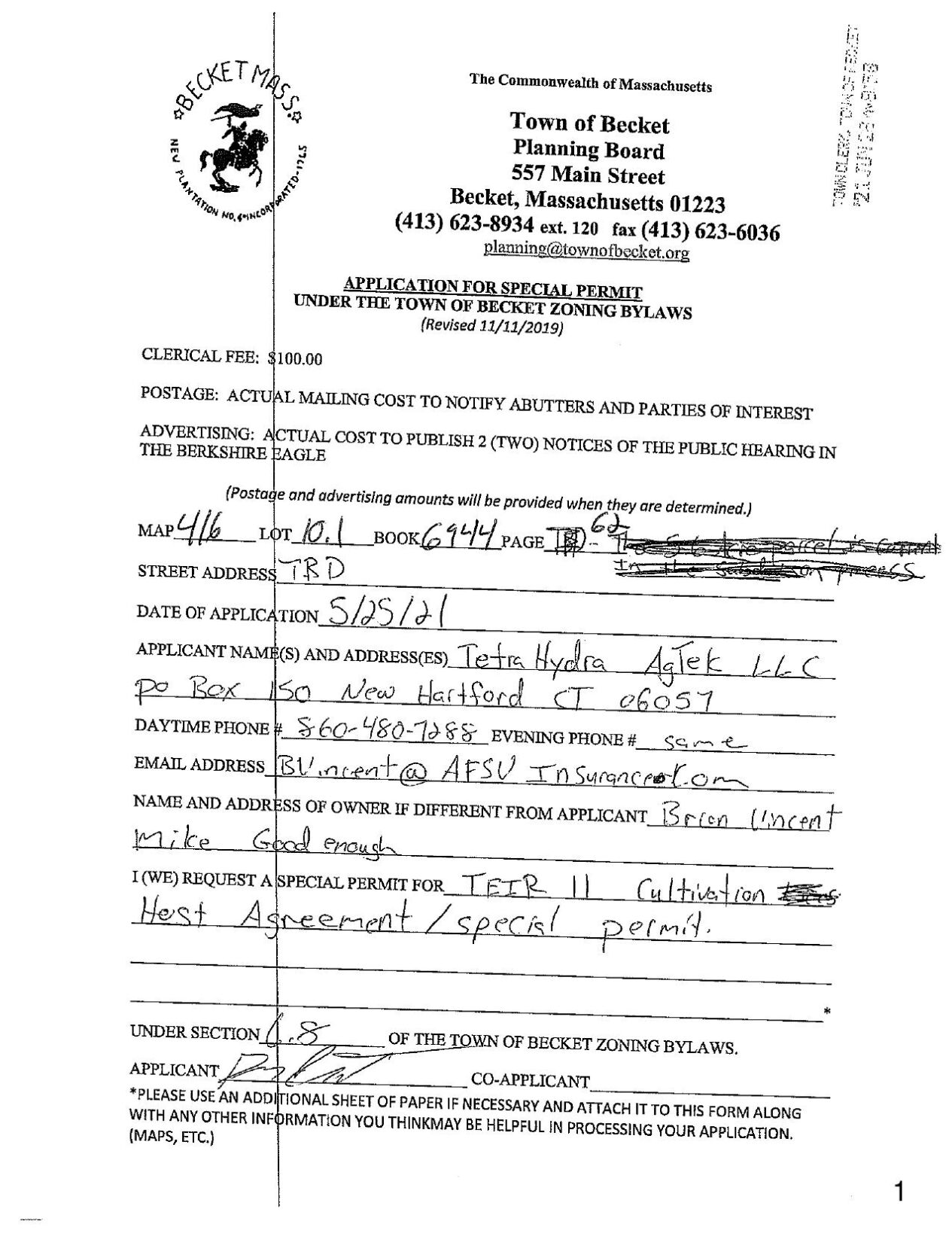 “I just feel that the issue of marijuana farms in residential neighborhoods poses a real problem, because it affects the quality of life in those neighborhoods,” said Lei-Anne Ellis, who lives nearby and has spent months traveling to cultivation sites in the Berkshires and researching the issue. “Nobody wants to smell skunk two months out of the year. It’s very hard to go backwards.”

The company made its pitch last January, then withdrew its application. It refiled in June to be allowed to tend up to 100,000 square feet of cannabis and went to a contentious Planning Board meeting in late August, when the review was again delayed by the discovery that applicants needed to have secured a host community agreement with Becket — a missing element that’s now in place.

Brian Vincent and Michael Goodenough, two of TetraHydra AgTek’s principals, said in an interview that they are prepared to argue that any odors produced by the crop will be well-shielded from homes in the area by specially designed wind breaks. They say air-flow patterns will also take any odors away from where people live in this remote rural area on the southeast side of Berkshire County.

Vincent said the host community agreement that the company reached with Becket provides protections for residents as well.

“We’re going to be working with the town to make sure that there is no smell permeating off of the property and creating a nuisance,” he said in an interview. “We hear your concerns and we’re trying to address them the best that we can. We’re trying to build the best rapport we can with the town.”

The company is scheduled to present its special permit application at a busy Planning Board meeting that starts at 5 p.m. Wednesday in the town office’s Berkshire Room. The meeting will be both in-person and available by prior registration on Zoom. The board will also be discussing unrelated zoning bylaw revisions and a possible change to its cannabis bylaws related to marijuana delivery services.

Ellis, the Becket resident, said she and others will press, in the review process that’s about to begin again, for the town to document odor issues before and after TetraHydra AgTek brings in its harvests. They want an independent person, not a town official, to conduct a baseline odor study.

Ellis said that in her research, she’s been cautioned by people in neighborhoods near cannabis farms to act early. “Most residents complain about the odor. Once the odor is there, what do you do?” she asked. “It is really imperative that we think about this odor, because the houses are nearby. We want a way to measure the odor before, and after, when we have issues.”

Opponents will also be asking the town to require regular groundwater quality tests to scout for contamination.

Vincent said the company is willing to share any information an assessor needs. He said TetraHydra’s water use will be limited — and the farm would draw less water, in all, than the land’s historic forest cover. “There will not be any contamination from our facility,” he said.

Neighbors are also asking that the town’s host community agreement specify that 30 percent of the farm’s workforce be made up of Becket residents. “They are outsiders coming in to Becket to farm,” Ellis said. “Where is the benefit for the local labor force?”

The current agreement asks that TetraHydra hire as many local people as possible.

Opponents will also seek to have the company disclose its investment in Becket, so that its property tax obligation can be properly assessed, Ellis said. “If the town is going to do this, we want the people of the town to benefit,” she said. “We’re fighting this all the way to the Cannabis Control Commission. I’m not laying down my computer. I’m trying to also be constructive.”

Goodenough, of TetraHydra, said the company wants to be a good neighbor and if approved would have seven to 15 people working full time.

The company proposing to cultivate up to 100,000 square feet of cannabis off Quarry Road in Becket says it needs more time to prepare its site plan.

Proponents of a cannabis-cultivation business in Becket are expected to file new plans in less than two weeks, overcoming delays they blame on COVID-19, then address questions in early February.

As a long public hearing drew to a close in Becket, the co-owner of property that would be leased for a cannabis farm said she is tired of hearing opponents speak of "quality of life." She asked: “Where's our quality of life in this mix?”

Becket board shifts to deliberation stage on cannabis farm bid

Becket’s Planning Board voted Wednesday to close a public hearing on a controversial cannabis farm, rejecting an attorney’s call for the panel to continue to accept comment.

A large-scale Becket cannabis farm proposed more than a year ago — then vigorously tracked and opposed by neighbors — won a long-sought special permit Thursday.