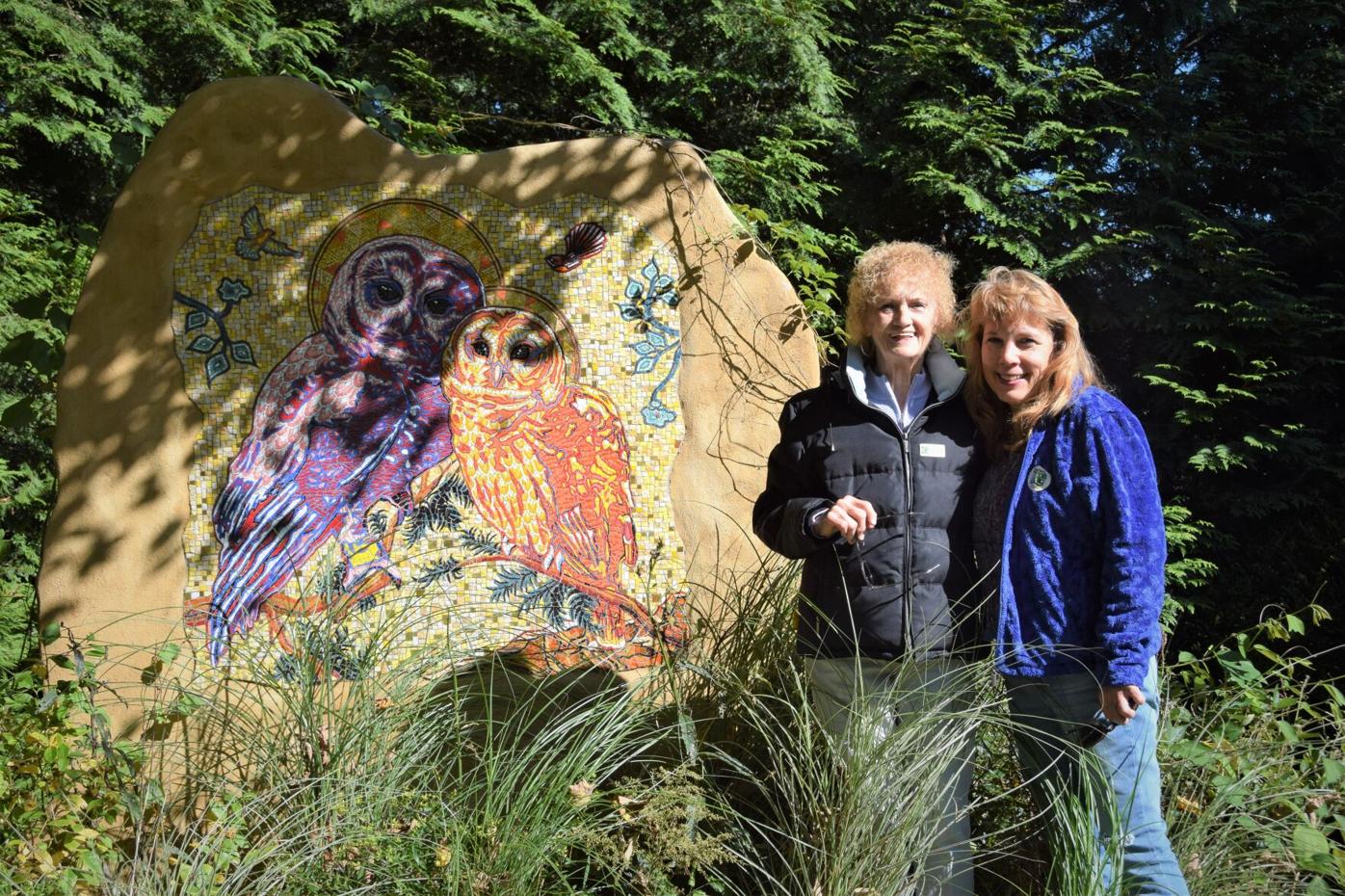 Distraught after the death of her father, Kathy-Ann Campbell, right, of Winsted, Conn., asked for a sign "that he was OK," particularly a sign involving an owl or an oriole. On June 25, her request was answered at the Berkshire Botanical Garden in Stockbridge. A few weeks ago, Campbell brought her mother, Rose, to see a mosaic that had brought her to tears, and her mom had the same reaction. 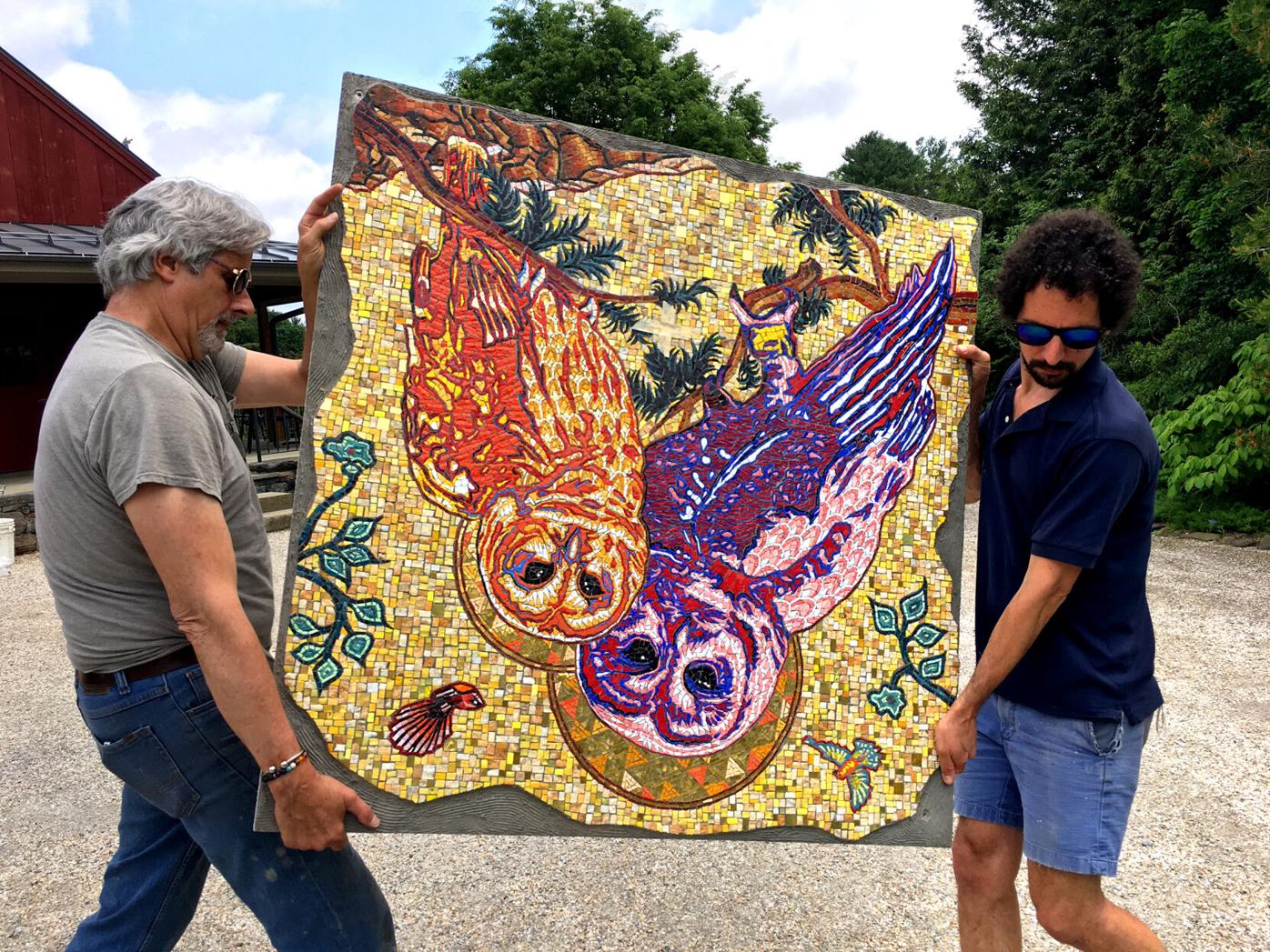 STOCKBRIDGE — An artist in Brooklyn, N.Y., created a mosaic depicting owls. He had his reasons. The Berkshire Botanical Garden made room for it this spring. It had its reasons. A woman from Connecticut came upon it in June and broke down in tears. She had her reasons (obviously).

This is a story about how the universe sometimes provides evidence that its workings are rational. Or it’s a story of bewildering coincidence.

Let’s start with the woman from Connecticut.

David Foth was his name. He was a machinist and Mets fan from Torrington, Conn. In her eulogy, Campbell described him as a “protector,” a “deeply sentimental” man who cherished his wife, his two daughters, his grandchildren, friends and his Mets. When he built things, they were meant to last. He was a man of precision and perfection.

He loved the natural world. He’d lead the family on trips to the sea that included scalloping in the frigid Rhode Island waters of October. He had built a scallop finder, a contraption with windows at each end that allowed them to search from the water surface for those tasty mollusks hobnobbing upon the ocean floor.

He was the type of person who had a favorite bird. His was the oriole. He was endlessly on the lookout for orioles. He passed on his passions to Kathy-Anne. Her favorite bird became the owl.

A week after his death, she remained distraught. Hoping to collaborate with the cosmos, Campbell, of Winsted, Conn., asked for a sign. “A sign that he was OK,” she explained, “that he could hear me, that he hadn’t left me, that I could still talk to him.”

The sign she requested was for an owl or an oriole.

“I just started crying, just bawling my eyes out. I hugged the piece the best I could and just sat there on the bench with such a sense of calm and peace come over me.”

If you happened to have been at the Berkshire Botanical Garden on June 25 and saw a woman in her mid-50s sitting on a bench, uncontrollably sobbing, that was Campbell, and those were tears of joy.

Just to back up a moment: Her husband, Andy, had taken her to the garden June 25, her birthday, thinking that it might help her state of mind. Good call, Andy!

“We were ready to go home, and I was walking down the lily path, and then all of a sudden I turn the corner out of the trees and there were the owls, staring at me, this big, huge mosaic,” Campbell said.

The large mosaic depicts two spotted owls. Not only that, in the background, there’s a flying creature, orange and black, the color of an oriole, and it appears to be carrying a — wait for it, wait for it …

“I just started crying, just bawling my eyes out,” Campbell said. “I hugged the piece the best I could and just sat there on the bench with such a sense of calm and peace come over me.”

She especially appreciated that her father — or, ahem, rather, Peter D. Gerakaris, the artist who created the piece — chose spotted owls. The federal government lists them as threatened. As a first-grade teacher, Campbell takes special care to teach her students about the importance of protecting the creatures of the Earth, with priority given to those on the verge of extinction.

She appreciated the mosaic so much that, a couple of weeks ago, she took her mom, Rose, to see it.

“I feel the same calm right now that you feel,” Rose told her daughter.

“It had been such a long time that I had seen her smile,” Campbell said.

The mosaic was an integral part of the botanical garden’s “Taking Flight” exhibition, which opened June 11, said Robin Parow, the director of marketing communications. Thanks to a donor, it now is part of the garden’s permanent collection.

“First of all, I’m just totally honored by all of this,” Gerakaris, the artist, told The Eagle. “It’s a real gas to sit back and let the work take on a life of its own.”

OK, and so what’s the work all about?

“In a nutshell,” he said, “it basically pays homage to exotic and mostly endangered or rare, threatened species from around the globe, of both flora and fauna, and takes these species and transposes them into a neo-Byzantine icon context,” he said.

He collaborated with the mosaicist Stephen Miotto, who helped translate Gerakaris’ original painting into cut glass, all set against what is meant to look like ancient ruins.

And is that an oriole carrying a scallop shell, or what?

Gerakaris said his original intention was “a scallop-shaped fantastical/mythical bird,” but he now loves Campbell’s interpretation.

He wanted it mentioned that, in the upper left of the mosaic, he has a falcon.

“In Greek, my family name, Gerakaris, translates to ‘falconer,’” he said.

His Greek grandmother, YiaYia, would have visions and dreams about flying, he said.

“So, I personally regard the falcon as her presence,” he said.

Greece is one of Campbell’s favorite places on Earth. In college, she spent three weeks there.

“My dad worked hours and hours of overtime so that I could go on that trip,” she said.