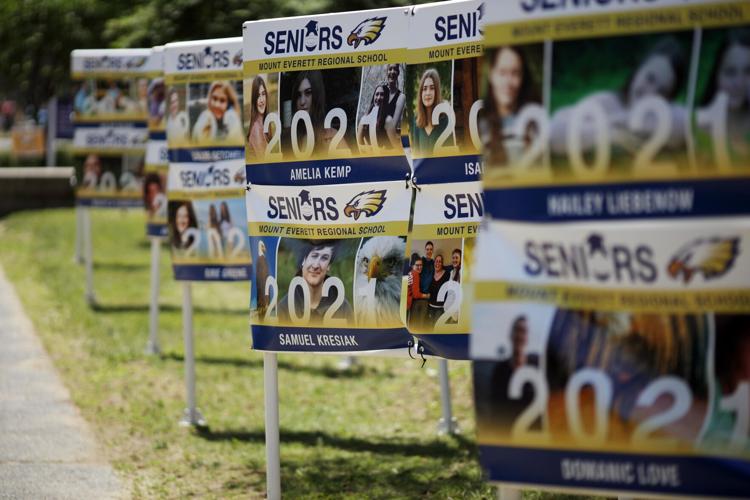 Banners featuring members of the graduating class line the driveway for the Mount Everett High School graduation ceremony at the school in 2021. Merger talks between the Southern Berkshire Regional School District, which includes Mount Everett, and neighboring Berkshire Hills continue to roll on. A recent survey sent out to residents, students and staff indicated that people are interested in learning more about a potential merger of the districts. 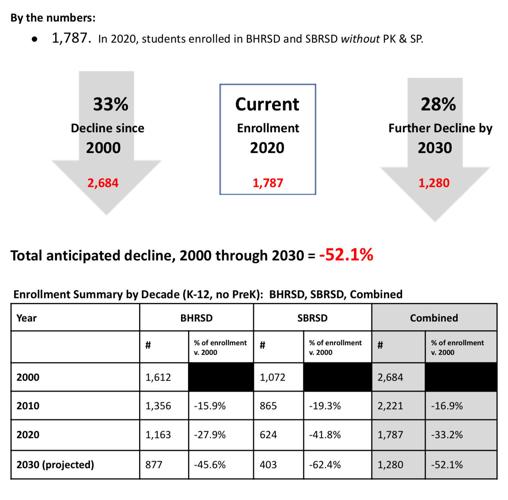 GREAT BARRINGTON — They say there is a lot to like about consolidating two South County school districts, and also a lot to worry about.

This is a small taste of what was culled from the results of a survey of 1,200 residents, students and staff by a board working toward a recommendation for consolidation and/or collaborations of the Southern Berkshire and Berkshire Hills regional school districts.

All and all, it appears people are interested in learning the art of the possible.

"A key takeaway from the surveys is that there is a remarkable degree of openness to the possibilities in the models under construction," said Lucy Prashker, an Alford resident and chair of the 8 Town Regional School District Planning Board.

After officials rejected mergers over the years, the board — which is partly supported by grants — took up the exploration anew in early 2020 and didn’t let the pandemic stop it from gathering data about all the schools, and casting out for more with a survey.

Now a range of reports are available on the board’s website ahead of a Feb. 7 public meeting. There, the research team will discuss what it learned, and the various benefits and drawbacks of a high school merger and its Career Vocational and Technical Education possibilities.

Then on Feb. 9, the board will present three models as it moves toward making a recommendation. Both meetings will allow for public comment. Later, it will be up to the towns to decide whether they want to make changes and draft a new regional agreement.

"It's far from the last step," said Jake Eberwein of the Berkshire County Education Task Force, who is project manager for the initiative.

The effort is a response to changing dynamics that includes rising tax bills for those who live in the eight towns that support the two districts.

"What we know for sure is that enrollment is declining and will continue to decline, and that is squeezing both the ability to offer a broad range of educational programs and squeezing finances," Eberwein said.

For years, residents have clamored for consolidation, at the very least, of Monument Mountain and Mount Everett regional high schools.

The 8 Town Regional School District Planning Board will hold two public meetings on Zoom. For login details go to rsdpb.org

Another dimension to the question is the ongoing attempt to renovate or rebuild Monument Mountain High and how this will affect a possible merger. School officials are awaiting word from the state as to whether Monument will qualify for money to start such a project.

Here are some points taken directly from the survey results:

Some data culled by the board includes:

Merge Berkshire Hills and Southern Berkshire school districts into one, and have high school students attend a newly overhauled Monument Mountain High, a consultant told the panel. All eight towns will have to agree.