GREAT BARRINGTON — The state agency that funds school construction projects has rejected the most recent application to renovate or rebuild Monument Mountain Regional High School, saying it is overwhelmed by needy schools across the state.

In an April 14 letter to Berkshire Hills Regional School District Superintendent Peter Dillon, the Massachusetts School Building Authority did not give details about why Monument didn’t achieve eligibility in the 2020 application round. The agency said that, last year, it had received 71 “statements of interest” from 52 school districts, and in reviewing those, had to prioritize those with “the greatest and most urgent need.”

The authority also said that it is committed to working with the school in the future. 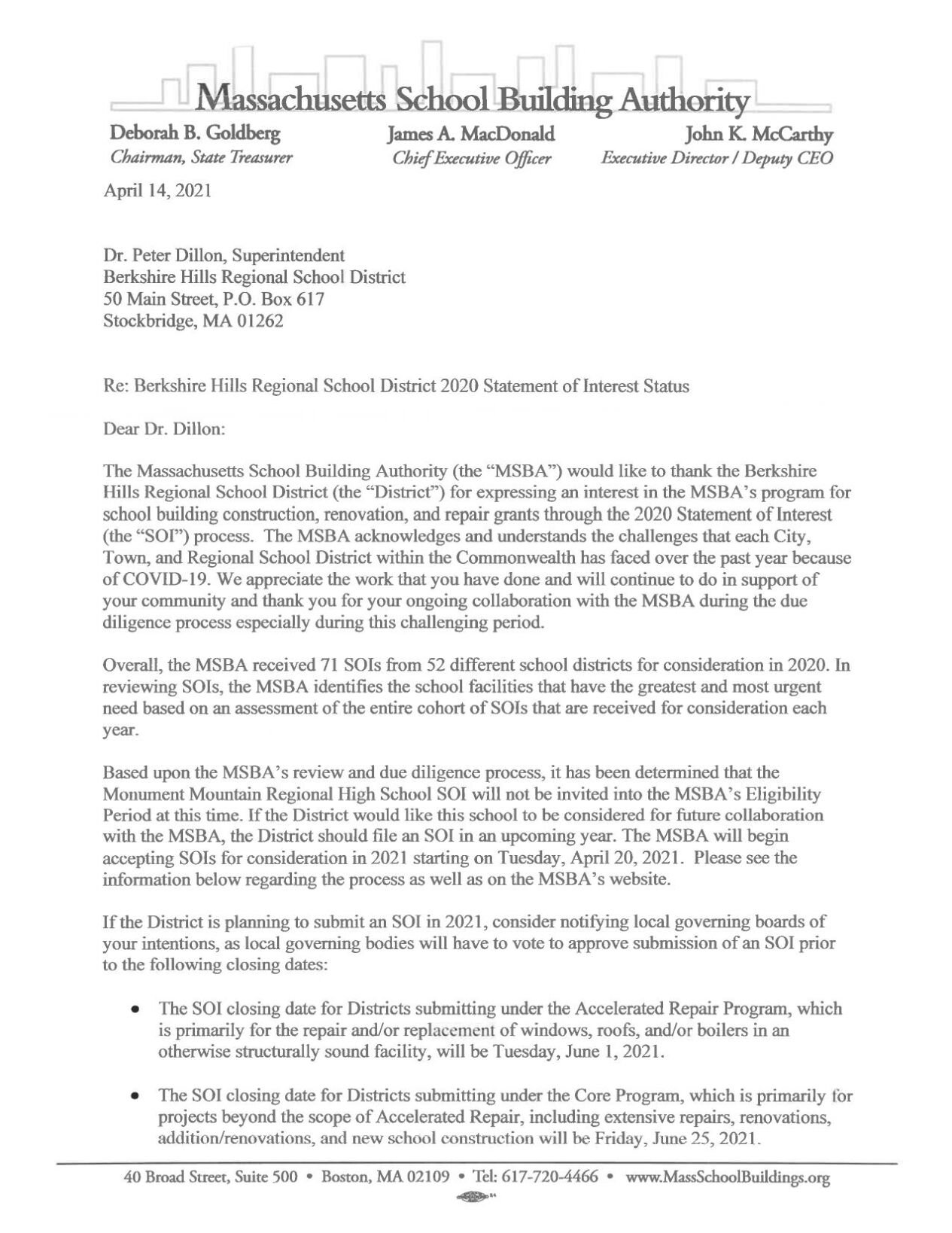 Dillon said the district is reapplying immediately and that the School Committee will vote to approve this within the next several weeks, since the authority extended its deadline to June. He also said that he will get an answer within six months — an accelerated timeline.

It has been a long road for a district that has submitted five applications since about 2010 to overhaul Monument, built in 1968.

Two of those were accepted and, with the authority, developed into renovation plans that Great Barrington voters twice rejected. Taxpayers mostly were worried about tax increases, since the town with the most students in the schools shoulders most of the school budget. Stockbridge and West Stockbridge also are part of the district.

The authority’s most recent rejection of a statement of interest for Monument came in January 2020.

The school, though, continues to deteriorate, and this places limitations on certain areas of education, say district officials, students and parents. Problems include old infrastructure that requires constant upkeep and is dated for modern learning.

Despite this, the school’s educational mission soldiers on, Dillon said.

“The district is doing well; the towns and School Committee are unanimously supporting budgets,” he added. “What’s going on in the district has never been stronger.”

He said he is optimistic that Monument will get on the authority’s eligibility list soon, and that voters will adopt a plan, since there is more revenue in Great Barrington and because upgrading the school can’t wait much longer.

GREAT BARRINGTON — Plans for a new or renovated Monument Mountain Regional High School will have to wait for at least a year.The Massachusetts School Building Authority has rejected a request …

When asked what officials will do if the application is rejected again, School Committee Chairman Stephen Bannon said the district will have to decide whether it can rebuild or renovate without state money, or make major repairs.

“If it’s not [accepted], we have some decisions to make,” he said. “The building isn’t getting any younger.”

Will a sixth attempt to overhaul Monument High work? We'll find out in March