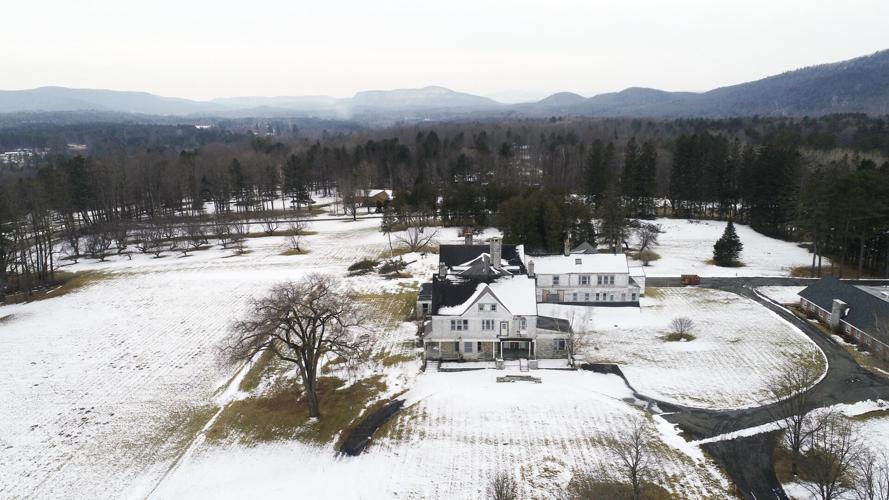 An aerial view looking south over the former DeSisto School in Stockbridge. Developer Patrick Sheehan has revived plans to develop a hotel, condos and single-family homes at the site. 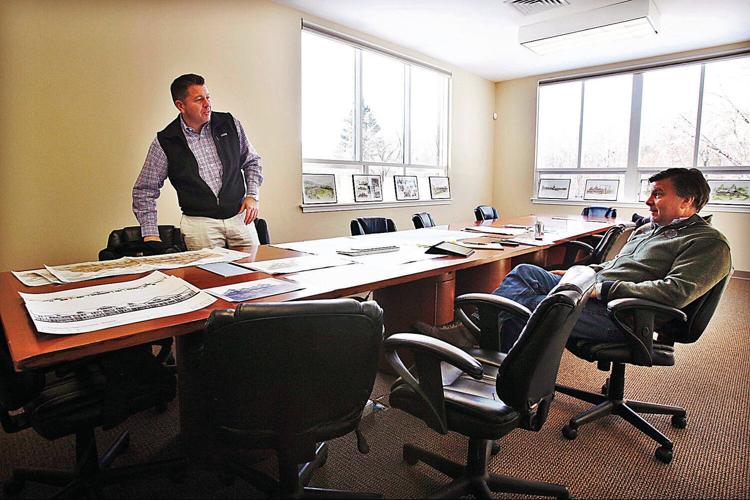 Patrick Sheehan, left, owner of the former DeSisto estate in Stockbridge, has revived plans to develop the site. At right is Rob Akroyd, his property manager, in this 2017 photo. 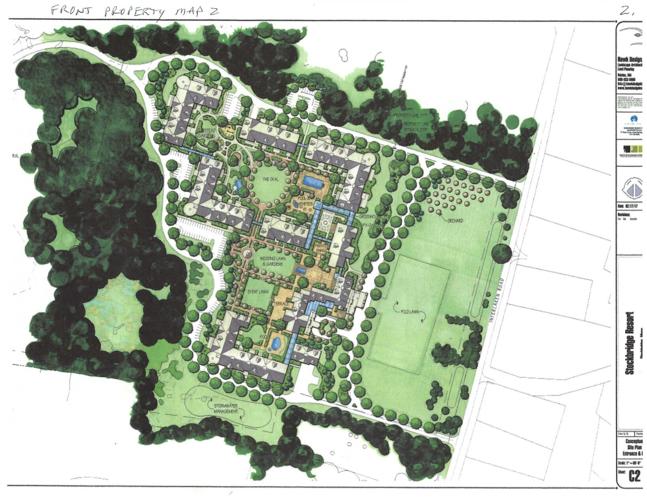 An illustration shows the design for the front portion of Patrick Sheehan's proposed development at the site of the former DeSisto School. 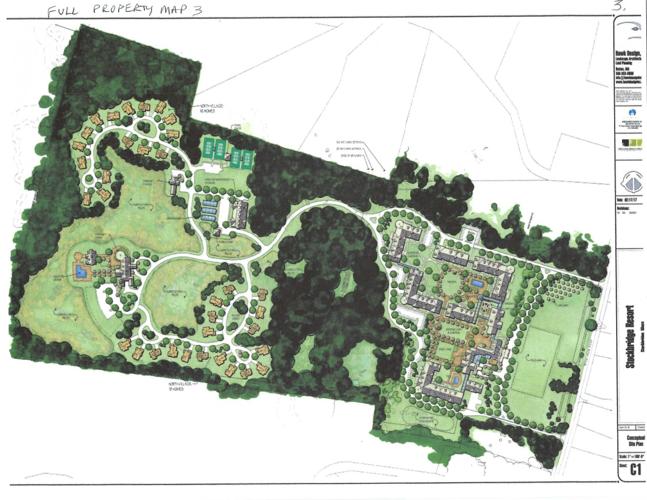 A proposed development at the site of the former DeSisto School would include a hotel, condo and single-family home complex totaling up to 220 units on the 320-acre site on Route 183 (Interlaken Road) in Stockbridge.

An aerial view looking south over the former DeSisto School in Stockbridge. Developer Patrick Sheehan has revived plans to develop a hotel, condos and single-family homes at the site.

Patrick Sheehan, left, owner of the former DeSisto estate in Stockbridge, has revived plans to develop the site. At right is Rob Akroyd, his property manager, in this 2017 photo.

An illustration shows the design for the front portion of Patrick Sheehan's proposed development at the site of the former DeSisto School.

A proposed development at the site of the former DeSisto School would include a hotel, condo and single-family home complex totaling up to 220 units on the 320-acre site on Route 183 (Interlaken Road) in Stockbridge.

STOCKBRIDGE — First proposed more than five years ago, then sidelined amid a storm of opposition, a proposed redevelopment of the former DeSisto School is back on the table.

During an informal presentation to the Select Board on Thursday night, developer Patrick Sheehan outlined his vision for the 320-acre site at 37 Interlaken Road (Route 183), anchored by a deteriorating, 130 year-old mansion.

Sheehan, who acquired the site for $1.3 million at a public auction distress sale in 2009, had listed it for sale at $9 million, but no takers emerged.

Now, as before, Sheehan projects a total of 210 to 220 units on the property — a mix of a hotel, condos and single-family houses. Most of the land is zoned residential in 2-acre and 4-acre parcels. He described a phased-in approach “so, hopefully, it wouldn’t adversely affect abutters.”

His current vision for the property is identical to the proposal he first outlined in December 2016. That plan, which was estimated to cost upward of $150 million, was scrapped in mid-2018, after contentious Select Board, Planning Board and other meetings, reflecting what appeared as widespread opposition, as well as support.

The project initially won support from the business community and some residents but encountered fierce headwinds from some neighbors and other locals who objected to its size and scale.

One abutter voiced concern that a completed project might be flipped to a hotel chain and that would be intrusive for nearby neighbors. Other opponents contended it was too big for Stockbridge, that it would alter the town’s character and overcrowd a mostly rural area, even though it was barely a mile from the busy Kripalu Center for Yoga & Health.

Accusing the town government of “bad faith,” Sheehan contended that he never had the chance to present a formal special permit application before the Select Board for a decision.

Sheehan, a semiretired nursing home and assisted living facility owner, did not offer an updated construction cost for his revived vision, which he described as “an overall lifestyle.”

“We don’t really have any new ideas,” he said. “We really just want to kind of recommit to the plan that we presented, and I think that kind of shows the quality of what we presented.” He cited meetings with neighbors and residents before and during the original presentation, including a series of open houses and tours of the property.

The key details presented by Sheehan, accompanied by a series of unofficial site plan sketches:

• Restoration of the historic mansion into a 40-room boutique hotel, preserving the expansive and prominent front lawn.

• Six buildings housing 140 condominium units, described by Sheehan as a “condo-tel” which either could be purchased or rented and managed by the hotel with administrative and support services.

• Thirty-five to 40 single-family houses in the rear section of the property, with a potential sales price of up to $900,000.

• A 15- to 20-acre working farm, described as an “Agri-hood,” to supply produce, flowers and “health-related stuff” to guests and owners, Sheehan said. “It’s all part of that healthy lifestyle, farm-to-table living,” he said.

• An array of amenities, including a spa, gym and swimming pool and, potentially, a restaurant (“You can’t have too many of those,” Sheehan noted), laundry and other facilities, and services desired by guests and owners.

Sheehan predicted that, if developed, the property would generate significant revenue for the town, including “far in excess of a couple million dollars a year” in property taxes, hookup fees, as well as hotel and meals taxes. He said the housing would be clustered “to preserve as much green space as we possibly could.”

“The type of housing we’re talking about providing really doesn’t exist in Stockbridge,” Sheehan told the Select Board. “We’re not trying to do additional housing that replicates what’s already here. We’re trying to do something a bit different and fill an unmet need. A lot has changed over the past couple of years.”

Sheehan stated that he lives on the property occasionally. If and when it is developed, he told the Select Board and an audience of about 40 on Zoom and in person, he would reside there full time for hands-on management.

“If there was any noise or other problems that people would worry about, the people who would be out front on it would be me and the other residents on the property,” he said.

“You’d get a cross-section of people who would live there; it would be a real benefit to older folks that may want to downsize, stay in Stockbridge and live in a community that can provide them the supports they need to remain in place as long as possible.”

The mansion, named Beckwithshaw, was built in 1892 by Leonard Forbes Beckwith and his wife, Margaretta, for $100,000, a huge fortune at the time.

Sheehan noted that, in 1936, the privately owned property hosted a forerunner of the Tanglewood music festival on what was then the Hanna Farm.

From 1948 to 1977, it was a progressive boarding academy, the Stockbridge School, and then the DeSisto School for bright and emotionally challenged students, opened by A. Michael DeSisto in 1978 but shut down by the state over allegations of abuse against students and then abandoned in 2004.

“I’ve put so much time, so many resources and so much money into the property that I’d like to see if this can’t move forward,” Sheehan told the Select Board. “I think what we’re proposing is reasonable. I want to reassure people that, given the opportunity, we’ll do the very best we can.”